Why was Reconstruction a failure?

The Reconstruction of the South was a period where the government decided they needed to solve economic and political problems that had become over the years. I think the Reconstruction Era was a failure for many reasons. The Era had a goal of allowing freedom and equality for all, abolishing slavery, and restoration of the Union and I don’t feel as though any of those were accomplished. President Lincoln issued a proclamation in 1863 showing his plan, where readmittance of all Southern states would take place after 10% of its voting population had proved its loyalty to the Union.

Don't use plagiarized sources. Get your custom essay on
“ Why was Reconstruction a failure? ”
Get custom paper
NEW! smart matching with writer

Lincoln was then assassinated and Johnson took on the plan as new president, but Congress called for stricter measurements. The proclamation was supposed to be put in place to secure rights for former slaves, and equality, although that issue still seems to be an issue in America today.

The 13th, 14th, and 15th amendment were all passed in effort to abolish slavery, and make African-Americans feel as though they were equal to whites.

There was such a push by certain groups to abolish slavery, but slaveowners and southerner a found many ways around the new rules. Things such as literacy tests, and poll taxes were there to make sure things still weren’t equal for African-Americans, although laws were trying to force it. Slaves weren’t educated, nor payed nearly close enough to what they needed to live off of, therefor it was impossible for them to pass literacy tests, and pay the poll taxes which meant they weren’t able to place their vote, and they were still set back by their race.

The republicans believed that for restoration of the Union to take place, that they’d have to make sure the South wasn’t going to secede once again.

Along with knowing the Southern states were not going to secede, they demanded an oath of loyalty from 50% of each states voting population. The restoration of states was a well thought out goal, but didn’t accomplish all that they were hoping for. In a country with all different views and beliefs I believe there will always be dispute between groups. I think the Reconstruction Era was a well thought out idea, but not approached in the right ways. I would consider it a failure, but there were positive aspects of it, such as slaves being freed, and African-Americans gaining the rights to vote, if they got lucky. Slaves gained very few rights, but still were happy they gained any. Although it brought both negative and positive aspects for people, I think we would be in the same position we’re in right now socially, and economically in America.

Why was Reconstruction a failure?. (2017, Jan 07). Retrieved from https://studymoose.com/why-was-reconstruction-a-failure-essay 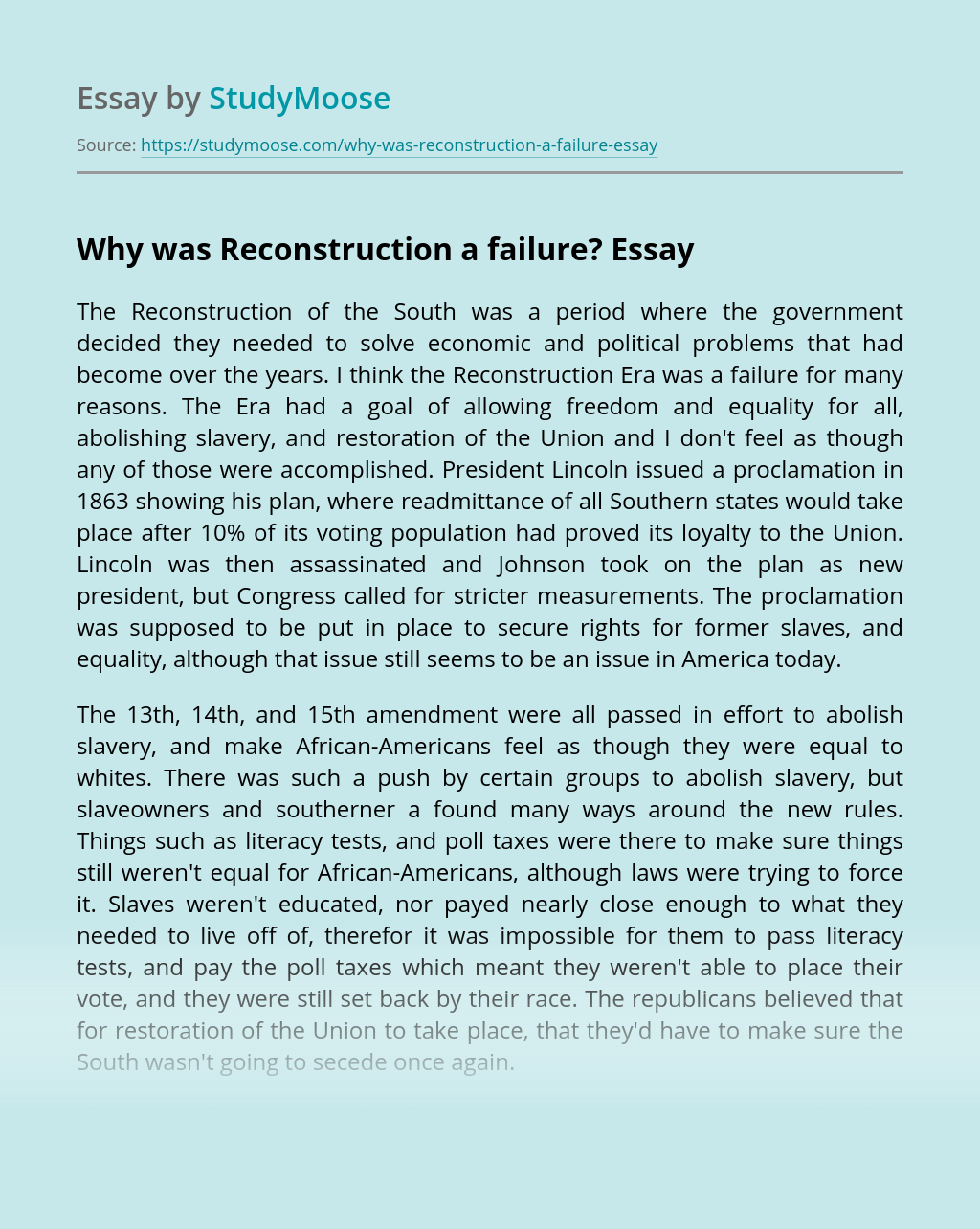