Successes and Failures of Reconstruction

When the Civil War finally came to an end the South was in destruction. The infrastructure of the South had been copletely destroyed and ruined. Gen. Sherman’s march was truly devastating for the South and it’s agriculture. Not only was the South’s land in need but also its government was in debt. The South was truly in need for a “Reconstruction.”

Reconstruction was the period after the Civil War when we were in need to reunite our nation in peace.

Turn in your highest-quality paper
Get a qualified writer to help you with
“ Successes and Failures of Reconstruction ”
Get high-quality paper
NEW! AI matching with writer

The Recomstruction period lasted from 1865 to 1867, so about two years. There were many successes and failures in the Reconstruction. One of the obvious successes was the reuniting of the nation once again. Another great success, and one that I believe was probably the best success, was the freedom for slaves. The slaves were finally free at the end of the Civil War. Through the Reconstruction there were acts that still had to be passed though to eventually give the full civil rights to African-Americans.

The first act was the “The Thirteenth Amendment”, which actually freed the slaves from their owners.

Next “The Fourteenth Amendment”, was passed which said that nobody could take away the right’s of any citizen no matter what race, gender, or age. Then “The Fifteenth Amendment”, was passed which gave the voting rights to the African-Americans. After these acts, African-Americans were truly equal in the U.S. One other success that I know of is “The Enforcement Act of 1870.” This act said that it was not aloud for people to use force, briebery, or terror to prevent people from voting just because of their race.

These are some out of many successes during the Reconstruction, but their were also many failures during this period.

The successes of the Reconstruction were great, but there were still failures. One failure was the taxation. Because the South was in need of rebuilding and healing, they raised the taxes to help with that. Corruption in the government made those taxes worst. People in the government would up the taxes and then use most of it for their own needs or want. Another failure, and probably the worst, was proverty. The South was in great poverty after the war. Not only for the government but also for the farmers who lost most their land and also all their slaves which worked the land for them. The failures of the Reconstruction were great and hard to get through, but eventually, we made it through those years and the Reconstruction ended.

Successes and Failures of Reconstruction. (2016, Oct 23). Retrieved from https://studymoose.com/successes-and-failures-of-reconstruction-essay 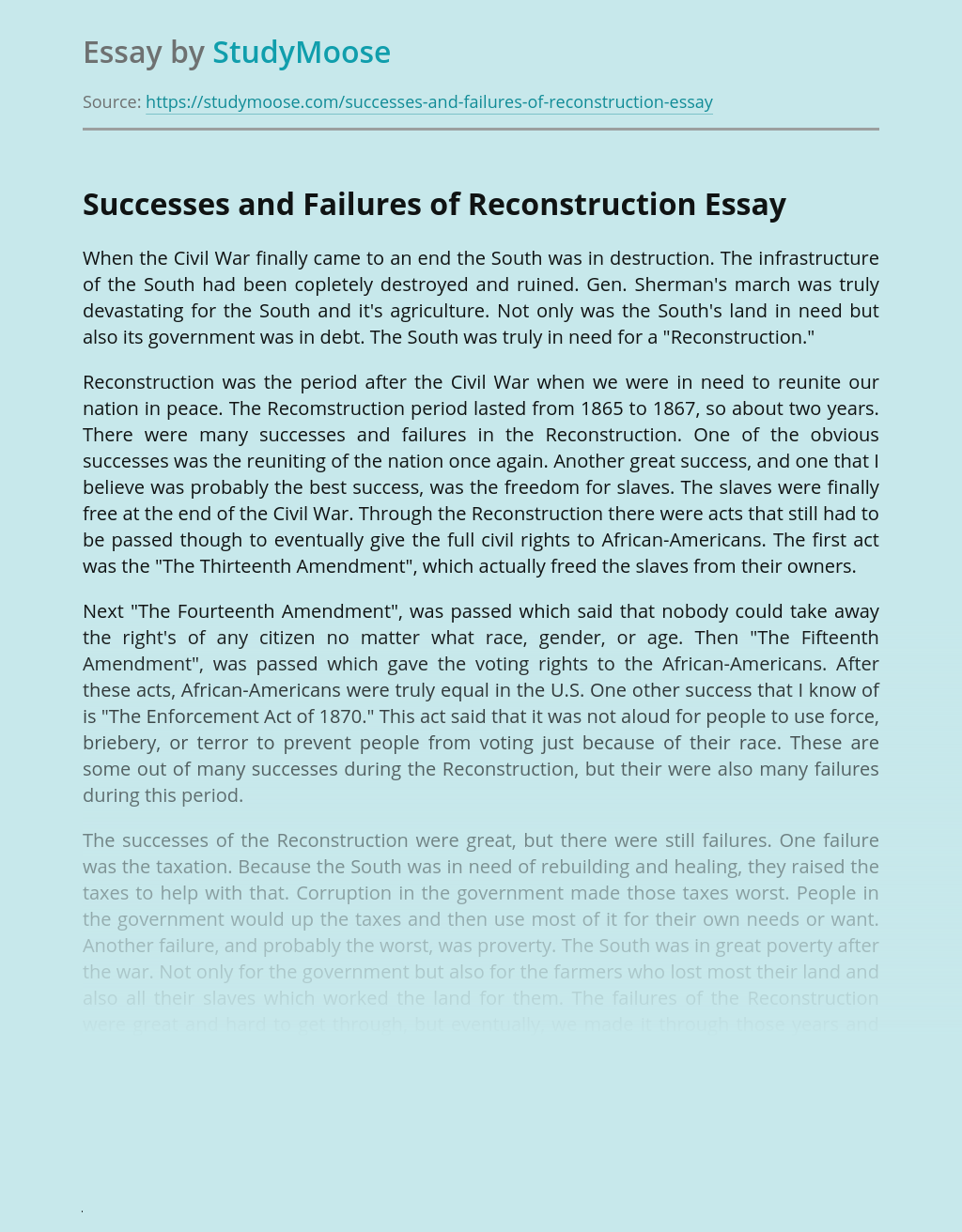 Turn in your highest-quality paper
Get a qualified writer to help you with
“ Successes and Failures of Reconstruction ”
Get high-quality paper
Helping students since 2015
Stay Safe, Stay Original