After the Civil War Era in "A Rose for Emily"

While reading A Rose for Emily one may notice the deep, rich troves of meaning behind each sentence. Every line delving deep into the past. Imprinted hearts of those livings in the 18th century South with rooted hatred or, truthly, superiority for a race of people that had previously been held in bondage. William Faulkner shows his understanding of the mindset people had during that age, which, in turn, makes his short story all the more complicated. The story shows the main character’s steady deterioration of health; the relationship between this character and a man named Homer Barron, a reconstruction contractor; and, the relationship between the main character and her father.

Don't use plagiarized sources. Get your custom essay on
“ After the Civil War Era in “A Rose for Emily” ”
Get custom paper
NEW! smart matching with writer

Each of these mirrors real-time events and some symbolize possible people.

After the Civil War Era, there was a period known as Reconstruction, where the South was under complete Northern control. Five Military districts were set in place to keep order and prevent one authority from being overburdened. There is evidence of symbolism regarding these events with the character Homer Barron.

The word baron was a term to signify nobility and the ownership of lands, including the people living there. It is not irrelevant concerning this character as he is the primary contractor for the town of Jefferson, Mississippi. Primarily tasked with the construction of roads and paving sidewalks, he was a stranger and symbolized northern, modern influence on a evolving society. Emily, on the other hand, is the definite symbolization of Southern pride and beauty, and the possibilities that slavery implies.

Before the civil war, some southern Plantation owners had grown so rich and powerful that they even had a decent grasp on the government that controls them. They had 21 representatives in the House of Representatives due to their slave population. This power is mirrored in Emily, a monumental figure in her community from a long line of prideful people. Even in her death she was respected. “WHEN Miss Emily Grierson died, our whole town went to her funeral: the men through a sort of respectful affection for a fallen monument” -Inge, M. Thomas, and William Faulkner. William Faulkner: A Rose for Emily. Merrill, 1970. So the relationship between Emily and Homer Barron was a doomed “love” from the beginning. As they spent time together, they were gossiped about. And as Homer’s true feelings were known to everyone, him being a gay man, Emily eventually killed him with arsenic. He was found at the end of the story, a complete skeleton laying in a bed with a spot worn down next to him. The two were incompatible, the Old South and Reconstruction would never be as smooth as we hoped.

However, after the death of Homer Barron, no one knew where he was. But, in fact, he was decomposing inside of her house, explaining the smell. This was around the time that her health began to deteriorate. People stopped visiting her, her house lost its shine and seemed to decay, and she became obese. These are all symbolisms to the changing of traditions and modernizing of the South as time passed, leaving tradition behind to decay and rot. It explains how the only thing people really felt for her was an obligated respect. No one knew her personally because no one had held on to the pride of the Old South as much as she did. So she passed away to join her kin, taking the last of tradition with her.

Lastly, there is rich symbolism in the relationship between Emily and her father. “When her father died, it got about that the house was all that was left for her; and in a way, people were glad. At last they could pity Miss Emily.” -Inge, M. Thomas, and William Faulkner. William Faulkner: A Rose for Emily. Merrill, 1970. The explanations used for Miss Emily’s father are simple, he is insane. The only appearance he has in the story is of him in a picture, “a spraddled silhouette, clutching a horsewhip.” It is easy to assume, considering his disposition and his reputation, what he symbolizes. Since Miss Emily is decidedly the pride of the South, her father must be the insanity that created that pride. The type of person who could commit atrocities such as slavery, and everything that implies, would have to be insane. Once he died, all that was left for Emily was the house she lived in. This symbolizes the destruction of the southern slaveholders after the Civil War. Since the plantations were primarily supported by the slaves that inhabited them, the sudden loss in free labor made the once profitable business less than bountiful.

Her relationship with these characters shows important areas of US history. Her and Homer Barron’s attempt at love represent the South’s unwillingness to fit into the Northern agenda and the incompatibility that shows to their very core. Emily and her father’s eerie relationship that seems to answer how Emily was able to hold onto her beliefs as tightly as she did. All of this ending as her health slowly began to rot and her body decay, becoming as gross as the beliefs her father held.

After the Civil War Era in "A Rose for Emily". (2021, Mar 07). Retrieved from http://studymoose.com/after-the-civil-war-era-in-a-rose-for-emily-essay 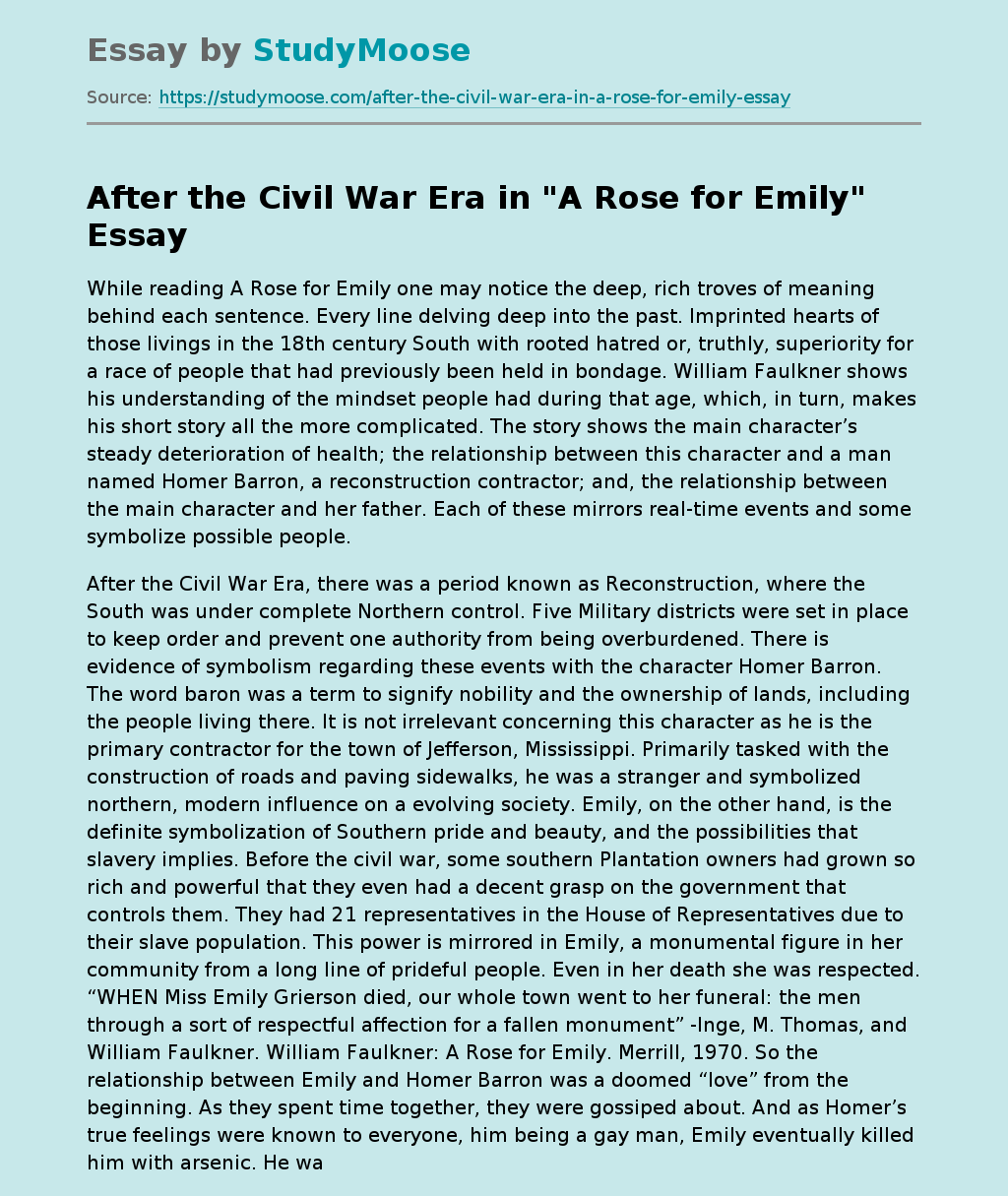