Effects of the Nigerian Civil War

One of Africa’s foremost contemporary authors and spokespeople Chinua Achebe has always taken as a primary concern understanding and accurately depicting the African people. In 1964, he wrote that the writer’s duty ‘‘is to explore in depth the human condition. ’’ In his pre-civil war novels, Achebe focused on the culture of his people and their emergence from colonial powers. However, with the outbreak of the Nigerian civil war, Achebe embraced the revolutionary spirit.

Not only did he serve as a diplomat, bringing eastern Nigeria’s message overseas, and write radio programs about the cause, he also found himself unable to work on long fictional works during this period.

Don't use plagiarized sources.
Get Your Custom Essay on Effects of the Nigerian Civil War Just from $13,9/Page

Even two years after the war ended, he felt no urge to work on a novel. He did, however, write three short stories concerning the civil war, all of which were collected in the short fiction volume, Girls at War and Other Stories. Civil Peace,’’ which first appeared in print in 1971, takes place in the immediate post-war period.

Focusing not on the hardships and devastation of the war but on the new opportunities to rebuild, the story has struck many critics for its optimism and positive outlook. At the same time, “Civil Peace” insidiously demonstrates the similarities between Nigeria during the war and after the war—during both periods, violence and corruption can emerge at any time.

Achebe believes that the African writer must function as a social critic, and in ‘‘Civil Peace,” he shares two co-existing views of the postwar Nigerian state. Civil Peace Summary ‘‘Civil Peace’’ opens in eastern Nigeria after the civil war has ended. Jonathan Iwegbu considers himself and his family lucky. He, his wife, Maria, and three of their four children are alive. He even has maintained possession of his old bicycle, which he puts to use as a taxi. His taxi service allows him to make money, and within two weeks, he has earned ? 50. Jonathan then travels to Enugu, the capital city, and finds to his great surprise and delight his house still standing, even though some nearby structures are reduced to a pile of rubble from the war. The house needs some repairs, so Jonathan immediately collects available materials: zinc, wood, and cardboard. He hires a carpenter to complete the work and soon moves his family back home. The entire family works hard to earn money and rebuild their lives.

Effects of the Nigerian Civil War. (2017, Jan 24). Retrieved from https://studymoose.com/civil-peace-2-essay 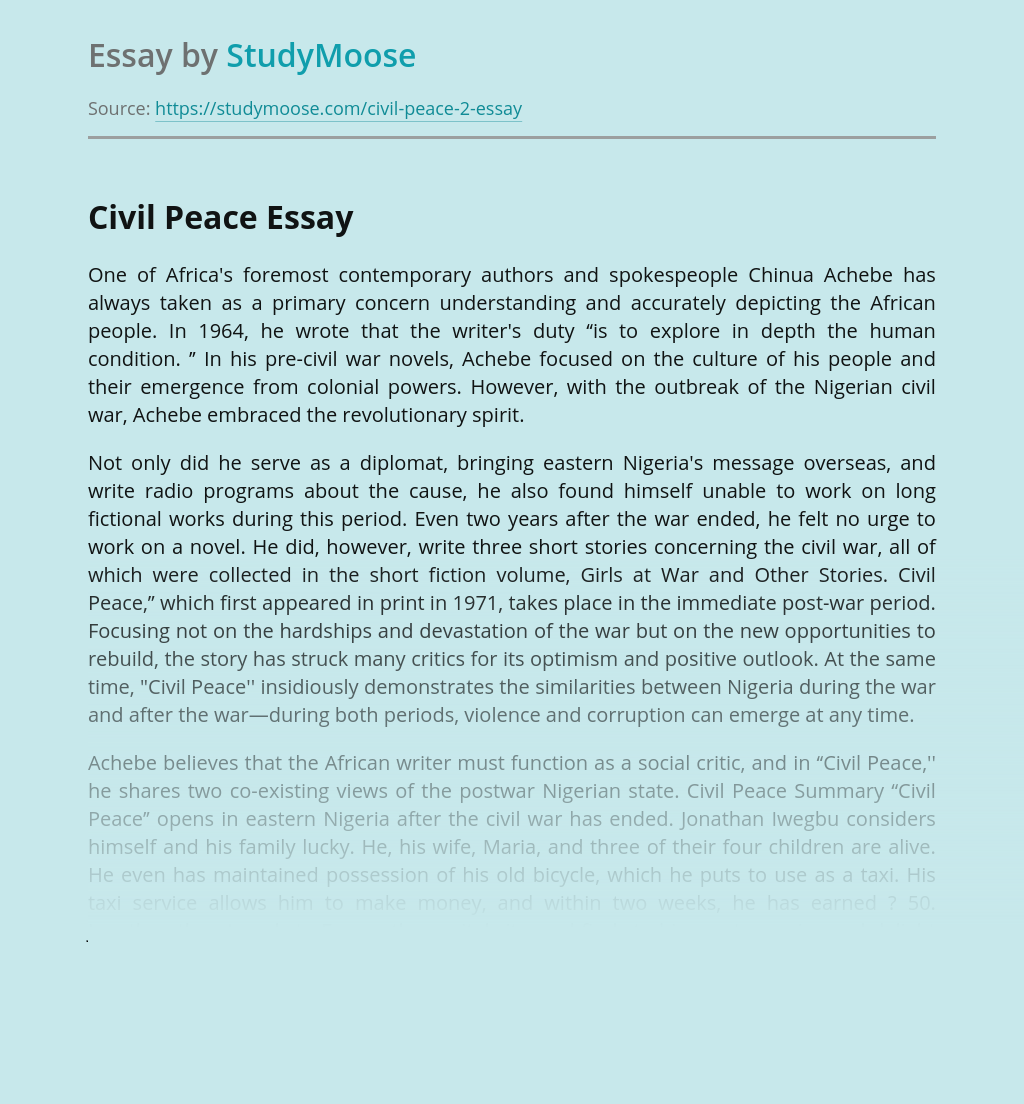 The obstacles facing Estate Surveying and Appraisal professional practice in Nigeria Experts in the building market have listed some elements bedeviling Estate Surveying and Assessment Occupation in the country. They consist of: bad remuneration, quackery, rigid legislation, absence of training and falling requirements of valuation practice. According to Solanke (2010 ), mentioned that poor quality...

1.0 INTRODUCTION All human cultures tell stories about the past, deeds of ancestors, heroes, gods, or animals. Songs sacred to particular peoples were chanted and memorized long before there was any writing with which to record them. Their truth was authenticated by the very fact of their continued repetition. History which can be considered as...

Get Essay
Causes, Effects and Solution to Boko-Haram and Kidnapping in Nigeria

You have for long warned about insecurity from the North. Why do you think the army can’t contain it? As far back as eight to nine years ago, we observed that the institution of the Nigerian army became a target of the intelligentsia behind what we called Boko Haram. They have known that the Nigerian...

KEYWORDS Trainee discontent; trainee services; student workers administration; universities ABSTRACT The authors took a look at the policies and aspects that have in the past and at the present precipitated student discontent in Nigerian university campuses. Predictions about the policies that are most likely to produce trainee protest in Nigerian university campuses in the future...

One of the perennial problems which has not only defied all past attempts at permanent solution, but also has a tendency for evoking high emotions on the part of all concerned (each time it is brought forth for discussion or analysis) is the issue of equitable revenue allocation in Nigeria. It is an issue which...