Similarly, the social effects of examination malpractice is discussed as it affects the political, moral, socio-economic of the nation and conclude with suggestion and solutions through counseling intervention so as to protect the validity and sanctity of examination in Nigeria

All over the world examination is considered very important in educational system. By means of it, learners are formally measured and placements are made based on the results accrued from it.

In Nigeria, education has been adopted as an instrument for meaningful national development. Therefore, government, communities, private organizations, and individuals have established educational institutions with a view to training the citizens for the development of the nation’s physical and human resources. In these institutions, teaching and guidance services are supposed to take place so that appropriate skills and knowledge can be acquired by the learners.

Furthermore, machinery through which the extent of knowledge and skill acquisition is determined at each stage of learning has been set up.

This is in form of examination which would be organized in order to evaluate, assess, place and test knowledge and skills. The outcome of the examination is used as a basis for decision making on the examinee’s ability. In view of the exceeding importance attached to examination at national and international levels, examinations are seen as an activity that should be executed well. Learners in Nigeria see examination as activities that should be successfully carried out if future is assured. Thus, there are many instances where there are tendencies to pass examination at all costs. These trends and phenomena really called for concerns from all Quarters including the professional guidance counselors.

Educational Guidance as seenbyEncarta(2009),a process of helping students to achieve the self-understanding and self-direction necessary to make informed choices and move toward personal goals. Guidance focuses on the complete development of individual students through a series of services designed to maximize school learning, stimulate career development, and respond to the personal and social concerns that inhibit individual growth.

Although guidance activities are usually associated with educational professionals known as counselors, educational guidance is actually a cooperative enterprise involving the participation of teachers, administrators, other educational specialists, and parents. Similarly, Egbule (2002) puts the concept of Guidance and Counseling as a helping service in the understanding of the factors or events that led to the conceptual evolution of it as a subject matter, a professional discipline and indeed a helping service. Meanwhile, he submitted further that it is these factors that are responsible for its popularization as helping service and subsequent use in resolving various educational, vocational and socio-personal problems of individual in the society.

Some of the factors according to Egbule, (2002) include: * Traditional practices relating to advising * Civilization in modern society and problems associated with it * Development in the field of psychology and philosophy * Educational development * Socio-political developments * Different behavior problems of individuals that require counseling, among others. Ipaye, (1983) in Abdu, (2007) define guidance and counseling as a helping service that provides the atmosphere as well as the setting within a professional counselor can help a person (client) or a group of person in terms of resolving educational, vocational and personal-social problems.

It is also the process of assisting the individuals acquire, get acquainted with and becoming aware of the opportunities in the personal, social, educational and vocational world. This is with a view to experiencing and exploring various interventional communication roles. No doubt, counseling has a long interventional role to play by virtue of its significant relevance in curbing examination malpractices in Nigerian educational society as the comprehensive services would bring about positive attitudinal change in individuals thus creating an opportunity to operate in an atmosphere free from corruption and tension.

Since human beings have always been conscious of human ability and efficiency in the area of appointments or promotions, examinations of different form or standard have been with mankind in the course of human evolution. Examination has along history in the world as reported by Pratt (1980) in Umar G, Mburza A, Bulama K, (2009) that examination malpractices was first noticed over 3000 years ago in the famous Chinese Civil Service and regulations which include death penalty for both the guilty students and examiners. Olowu, (2006) in Nnachi, (2009) added that from China, formal examination spread to different parts of the world. By the middle of the 19th century, competitive examinations were introduced in Britain and India for the selection of government officials.

Corrupt practices in examination in Nigeria dated back to the pre-independence. According to various sources, the first publicly reported case of examination malpractices was in 1914, when the question papers of the Senior Cambridge Local Examination were reportedly seen by the candidates before the date of the examination. Since then, there have been incessant cases of irregularities reported on annual basis, the outstanding years were 1963, 1967, 1970, 1973, 1977, 1979, 1981, 1985, 1987, 1991, 1994 to 2003 (WAEC, 2004) the major features of the examination malpractices reported were: impersonation, smuggling in foreign materials, slot in, stealing, converting, collusion in examination hall, mass cheating, mass organized cheating, unlawful assistance from teachers and outsiders and insult on supervisors. This ugly phenomenon is inimical to academic and social development and it needs to be addressed drastically.

The incidence of examination malpractices over the years has become so alarming in both public and private institutions despite various sanctions employed. Examination malpractices have in recent years remained one of the disturbing phenomenons in educational institutions in Nigeria. The trend which takes different dimensions and forms has become alarming especially in higher institution of learning. It is not limited to internal examination prepared by schools, colleges, polytechnics, and universities, but it has gone up to external examinations such as WAEC, NECO, UTME, NTI, NABTEB, and professional examinations. The situation became embarrassing to the nation that the Federal Military Government had to promulgate Decree20 to deal with it.

Part of the provision of the Decree reads: Any person who fraudulently or with intent to cheat or secure any unfair advantage to himself or any person or in abuse of his office, produces, sells or buy, or otherwise deals with any question paper intended for the examination of persons at any examination or commit any of the offence specified in section 3 (27) (c) of this Decree, shall be guilty of an offence and on conviction be sentence to 21 years imprisonment. However, Examination Malpractices Act 33 of 1999 reversed the above Decree but stipulates punishment ranging from a fine of N50, 000 to N100, 000 and imprisonment for a term of 3-4 years with or without option of fine. It is regretful to note that this is a toothless bulldog as none of these penalties has been fully implemented, if at all they are implemented. 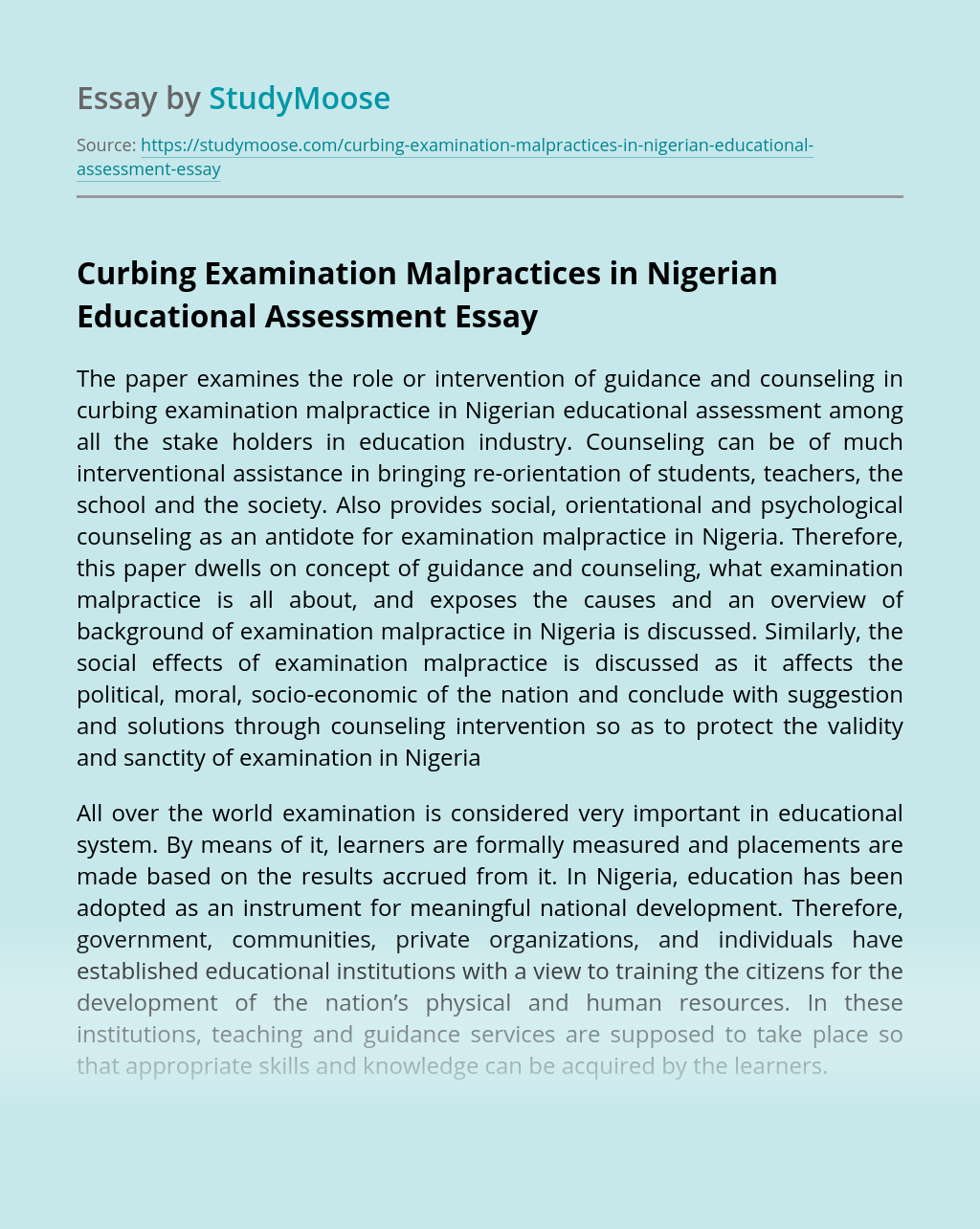