Was the Treaty of Versailles a Success

There are several ways in which the Treaty of Versailles was a success but there are also some which show it was a failure. The treaty of Versailles was the peace settlement signed after World War One. The treaty was signed in Versailles Palace near Paris-hence its name-between Germany and its Allies. The three most important politicians were David Lloyd George (Britain), Georges Clemenceau (France) and Woodrow Wilson (USA) also known as ‘The Big Three’. There were many territorial changes to Germany after the war, due to the treaty.

Don't use plagiarized sources. Get your custom essay on
“ Was the Treaty of Versailles a Success ”
Get custom paper
NEW! smart matching with writer

The most relevant one was the decision to give Poland a coastline, the Polish Corridor. This was a piece of land running through the centre of Germany, splitting it in two halves. By separating the rest of Germany from East Prussia, Germany was severely weakened as East Prussia had been a source of great income for Germany. An extra territorial change that the Germans did not expect was where the Saar coal fields were, they were to be given to France for fifteen years.

This was a great resource of coal for the Germans and losing it meant that they didn’t have a supply of coal and raw materials for its industries.

The Germans also had to de-militarize an area of their country called the Rhineland that was separating Germany and France. This was humiliating for the Germans as their military was not allowed in the land in which they owned. By giving back all the land that Germany had taken from different countries allowed power to be spread more evenly across the rest of Europe.

It also gave smaller, developing nations such as Poland, Czechoslovakia and Hungary a chance to govern on their own without the Germans overthrowing them. However, there were often disputes between the countries, concerning the distribution of territory in the Treaty.

The Treaty of Versailles established nine new countries, and changed many boundaries, but there was still a debate about the fairness of the allocation. The nine, new smaller countries were weak as they contained Germans which lived in the countries. They wanted to take over the countries and as a result of the countries being weak, in some cases they managed to gain some power. John May hand Keynes said “This treaty threatens the health and prosperity of the Allies themselves. By making impossible demands it leaves Europe unsettled than it found it”. Another term of the treaty was that the Germans had to reduce the size of heir army and weaponry.

This limited the army to just 100,000 of voluntary soldiers, and they also had to melt down their weapons, they were forbidden to use any sort of air forces too. This had the affect of making the Germans feeling angry and weak and thirsty for revenge. Also Germany was to pay ? 6. 6 billion in damages which badly affected their economy. Article 231, in the Treaty, is commonly known as the “Guilt Clause”. This said that the Germans were responsible for the whole of the War. The Germans had no say in anything and just had to keep quiet and take the blame for everything.

The treaty humiliated the Germans. The war-guilt clause forced Germany to accept sole responsibility for World War I. And although the German military had played a major role in igniting the war, other countries in Europe had been guilty of provoking political crises before the war too. Another organisation which was also created, to prevent war, was the League of Nations. This consisted of a group of countries; the four most powerful countries that joined were Britain, France, Japan and Italy. Although the American President, Woodrow Wilson, came up with the idea, America was isolated from it.

In view of the League’s desire to end war, the only criteria that can be used to classify a success, was whether war was avoided and a peaceful settlement formulated after a crisis between two nations. An example of this was a dispute over the Aaland Islands. These islands are near enough equal distances between Finland and Sweden. Traditionally, they belonged to Finland. However, the residents on the islands wanted to be governed by Sweden. Neither of the nations could come to a decision so they asked the League of Nations choose. The League decided that Finland would remain the governors but no weapons would be kept there.

Both of the countries agreed and it was settled. However, the League had many down falls. In Article 12 of the League’s Covenant it stated: “Any war or threat of war is a matter of concern to the whole League and the League shall take action that may safe guard peace”. Therefore, any conflict between nations which ended in war and the victor of one over the other must be considered a League failure. There were many wars between many of the nations, for example, the war between Russia and Poland. The League was accused for not doing its job-which was to prevent war. Overall, I think that the treaty of Versailles was a failure.

I think this because the Treaty wasn’t really accepted by all of the countries. The British Prime Minister thought that the treaty was far too harsh and would ruin Germany altogether. He also predicted that there would be another war in 25 years time. It was the Versailles treaty which gave Hitler power, they looked for a saviour and they found Adolf Hitler. He promised to bring back Germany on the world stage, to create jobs and wealth. He did all this but this was because he ignored the treaty by starting to rebuild the military, making new occupations for the Germans. As a result the biggest failure was that another war happened.

Was the Treaty of Versailles a Success. (2017, Mar 05). Retrieved from https://studymoose.com/was-the-treaty-of-versailles-a-success-essay 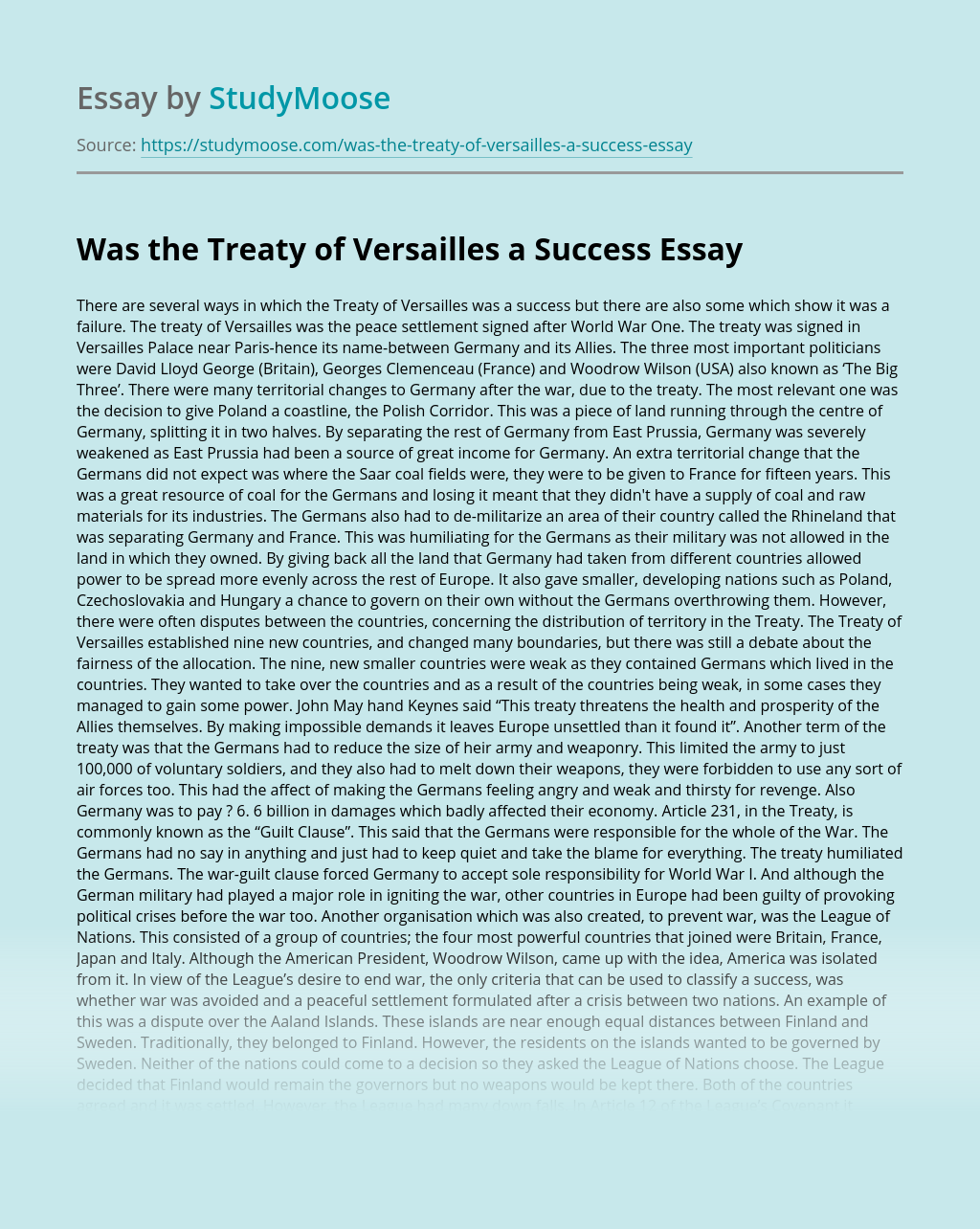