World War II: A Continuation Of The Great War

When the Great War came to an end with the signing of an armistice in the fall of 1918, the European counterparts of the Allied forces sought only to punish the German Empire to the harshest degree. With their determination to substantially debilitate Germany, The Treaty of Versaille decimated its army to an almost humiliating number, decreased the size of Germany, and forced the empire to pay an insurmountable amount in reparations for damages from the war. Basically, The Treaty of Versaille pummeled the German military and economy, and left Germany boiling with discontent, and pursuing the revenge that would come in the second world war.

Don't use plagiarized sources. Get your custom essay on
“ World War II: A Continuation Of The Great War ”
Get custom paper
NEW! smart matching with writer

The restraints placed on Germany would also create a vulnerable government that would give rise to the election of a totalitarian leader, poised for revenge.

Initially, the Treaty of Versaille expected Germany to pay 5 billion dollars in reparations until a committee met in 1921, when 25 billion more were demanded. This economic drain on their economy most likely was the single largest factor in intensifying Germany’s hostility toward Great Britain and France.

This demand was totally unfeasible, for it would literally crush the German economy and starve the population.

Also, by stripping Germany of it overseas colonies, the treaty also stripped Germany of investments and any sources of income. For example, the province of Alsace-Lorraine was a huge asset to Germany’s prosperity from coal mining. Since it would be impossible for Germany to meet the treaty’s demands, Germany would rebuild its empire and seek revenge.

World War II, when it began in 1939, shared many attributes with the first. The circumstances under which the war was spawned are basically the same: The German Empire was unhappy with their standing among the other rapidly developing nations.

Additionally, both began with a conflict between a German ruler and a Slav neighbor.

The battlefields on which the wars took place are essentially the same. Verdun, which was taken with ease in 1940 by German panzer divisions, was denied access to the Germans in the first war. The Western Front during World War II was basically a traced line of the front seen in World War I. Also, the River Bzura, near Warsaw, played a key role in supporting the efforts on the Eastern Front in both 1939 and 1915. It’s truly amazing to see the resemblances that appear in nearly every aspect of the two wars.

The Treaty of Versaille, I believe, had only one main goal: To severely cripple Germany’s imperial, military, economic powers so harshly that the country would never again be able to wage war. However, the treaty had the opposite effect on Germany. The country, with its devastated economy, turned to the radical ideas of Adolf Hitler. With his brilliance in reviving the country’s power, the rebuilt empire would inevitably wage war on France and Britain, among others. Because of the poorly resolved outcome of The Great War that eventually developed into World War II, and their astoundingly similar aspects, the conflicts from 1914-1945 unquestionably can be recognized as one, independent war, merely separated by a time of peace.

World War II: A Continuation Of The Great War. (2016, Jul 24). Retrieved from http://studymoose.com/world-war-ii-a-continuation-of-the-great-war-essay 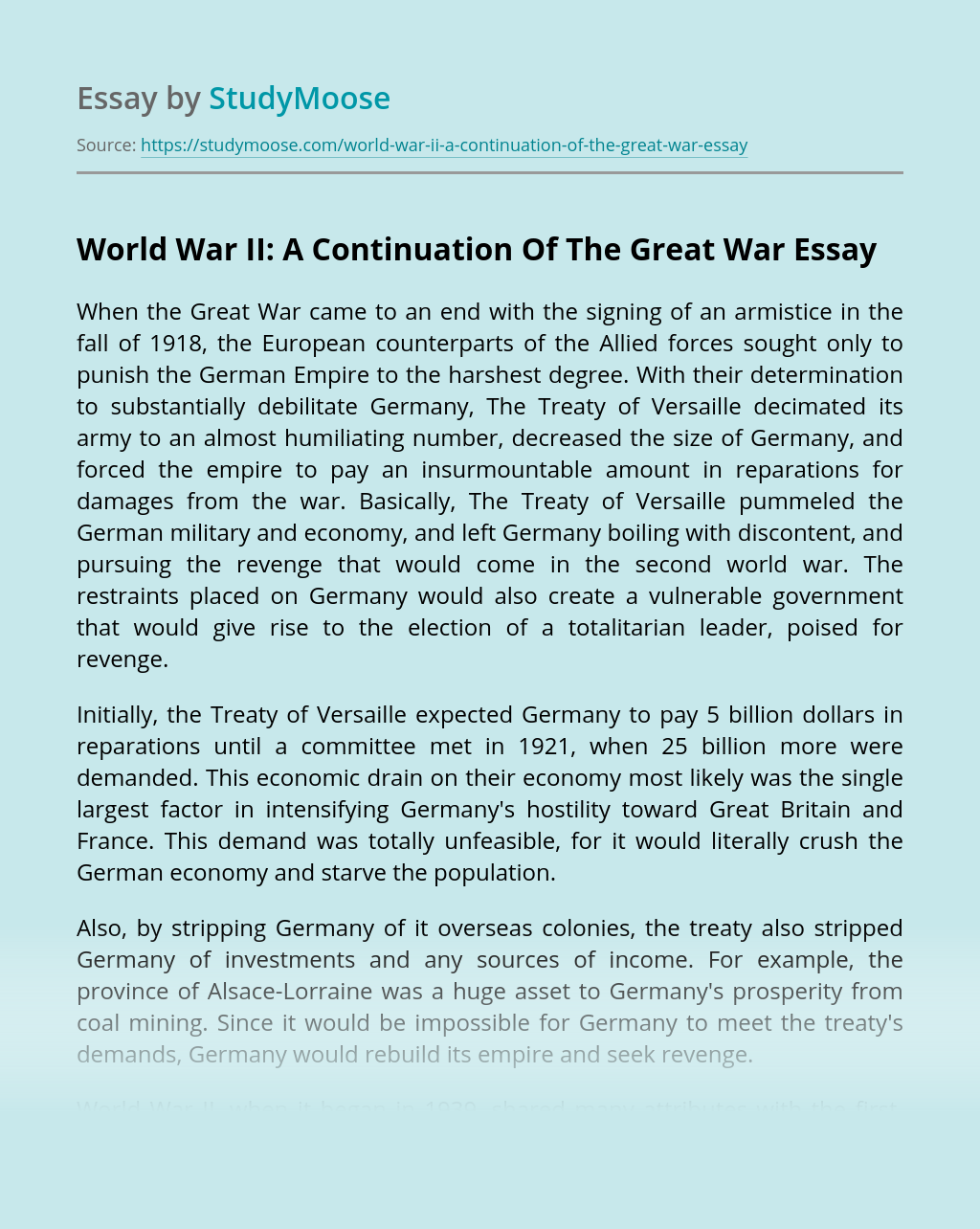