Why did France declare War on Austria in 1792?

In April 1792, the French Legislative Assembly declared war against the King of Hungary and Bohemia, for plotting aggression. They declared war in the name of the French nation in defence of liberty; it began the first ‘War of the People’s’ in the Modern world. Only 7 deputies voted against the war, which was thought by the majority to be in France’s best interests. The conflict lasted nine years and France lost 1.4 million inhabitants, and dramatically altered the trajectory of the revolution.

Don't use plagiarized sources. Get your custom essay on
“ Why did France declare War on Austria in 1792? ”
Get custom paper
NEW! smart matching with writer

There are many contributing factors to the war, which altered the revolution in some form. Perhaps the strongest supporter of a potential war with Austria was the King, Louis XVI.

From 7th October 1789, the Royal Family was forced to reside in the Tuileries Palace in Paris. Both the Royal Family and the National Assembly were at the political epicentre of France; they were under scrutiny and intimidation. The King disliked being only a Constitutional Monarch, he would not comply with the demands of the Assembly and did not fully accept the Constitution or the Declaration of the Rights of Man.

Therefore he was viewed as holding back the revolution from progressing. Louis planned to escape with his family to Montmedy, near the French Austrian Frontier, here the army was under control by a Royalist sympathiser, and Louis hoped that he could negotiate with the Assembly from a position of military power. However, on route to their escape, they were caught at Varennes and taken back to Paris. This failed escape marked the inevitable downfall of the Monarchy and the divisions of Royalists and supporters of the Revolution, which ignited the war against Austria and were the main fought over factors.

The people saw Louis attempted escape as treacherous. Many radicals supported a petition to remove the King from power as they felt they could no longer trust him. He had turned away from his people and more importantly from the revolution. This confirmed the fears that the King was holding the revolution back and may even be plotting against it. The war against Austria was also a war against the Monarchy itself; the Monarchy which had been long despised by the third estate. The new leaders of France wanted a new system, After the Flight to Varennes, a Republic gained popular support. And, to get this a war might have to be necessary.

Brissot was one of the first to support a Republic. He argued for the abolition of the Monarchy and the trial of Louis XVI. He saw that the King did not accept the Constitution and that the Court and European Powers were plotting against the Revolution. Brissot believed that a war would arouse enthusiasm for the Revolution and show the permanence and stability of the new regime. He believed that war was necessary to carry the Revolution to the rest of Europe and he furiously attacked the legitimacy of the European monarchs. In the Legislative Assembly his great influence on the conduct of foreign affairs contributed to the declaration of war on Austria in 1792, in spite of strong opposition from Robespierre and his allies. He claimed that a war would expose traitors to the revolution, the King and other counter-revolutionaries would be exposed and compelled to suffer for treason.

The desire for war resulted in the merge of deputies from the South west, and a group of deputies led by Brissot. They became known as the Girondins. There were about 130 Girondins in the Assembly, to obtain a majority they needed the support of Lafayette and his followers. Within the Assembly, the Girondins were keen to use war to unite France in defence of the nation. Brissot began a campaign for war in October 1791. War would unite all the French people under one banner, the Legislative Assembly believed that this banner would enable France with united strength to defend itself. In March 1792, Louis dismissed his Feuillant Ministers and appointed a more radical government, including some Girondin Ministers. These new ministers obeyed the Assembly, now, a month before the declaration; both the government and the assembly wanted a war.

France became involved in war due to the attitudes of both sides. The royal court was convinced that in the case of success, the war would strengthen the king’s position, while in the case of defeat, it would allow his foreign royalist allies to re-establish him as absolute monarch. The European Monarchs hated and feared the Revolution, interrelation of European Royal Families remained close and they supported eachother. The ‘Declaration of Pillnitz,’ not only heightened the fears of an Austrian Invasion but also defined the allies and the opposition. The declaration stated that Austria and Prussia were already siding with the Royalists. This made it clear that Louis was plotting against the revolution and him and the Monarchs of Europe would help him to regain his authority and power. The war was declared as the Revolutionaries saw it as the only way of securing a Republic and it might also spread the Revolution to other parts of Europe if it was successful. The sans-culottes and the radicals believed that the only way forward for France and the Revolution was the overthrow of the Monarchy and the establishment of a Republic. From the Declaration of Pillnitz, we can see that a war would be necessary for these objectives to be achieved.

The court was said to be an ‘Austrian Committee,’ headed by Marie Antoinette. The Monarchy and Royal Supporters believed that a war would re-instate their power. Army officers had fled and the French army was weak from inexperienced new officers, a defeat seemed to be easy. The Monarchy wanted a war; Austria and Prussia had great faith in their armies and believed they could intimidate France. A war would also strengthen Royal alliances between the European Monarchs, if France was defeated, it would also deter any post war pro revolutionary action from reoccurring.

Influential figures also held many contributions for encouraging France to go into war. Charles Dumouriez saw a war as a chance to further his own ambitions. In 1792, he was appointed Foreign Minister, he supported the war for mainly personal reasons, he hoped his ambitions would progress from a war with Austria. Lafayette saw the European powers as trying to intimidate France rather than invading. He was the first commander of the National Guard, he wanted the authority of the King to be strengthened and thought it could be done by waging a short but successful war against Austria, he felt it would increase Lafayette’s own prestige and he would be able to dictate to the King and the Assembly his own terms.

The leader of the Jacobin Club, Robespierre was interestingly against the war and proclaimed that France should fight the enemies at home. The fact that he became unpopular shows that France as a whole held strong support for the war.

France declared war on Austria as it thought it would be for everyone’s benefit. The Revolutionaries believed it would result in France uniting to oppose the King, allow the Revolution to progress and a Republic to be established. The Royal Supporters believed that the war would result in the re-instated power of Louis XVI and that it would put a block on the spreading of revolutionary ideas. Fear of the other side is what provoked the war, and pressure from the people of France and those in the Assembly is what finalised the decision for France to declare war. By evaluating the evidence shown, we can see that both sides were not taking the prospect of war seriously, they both regarded it as a stepping stone to what they wanted to achieve. 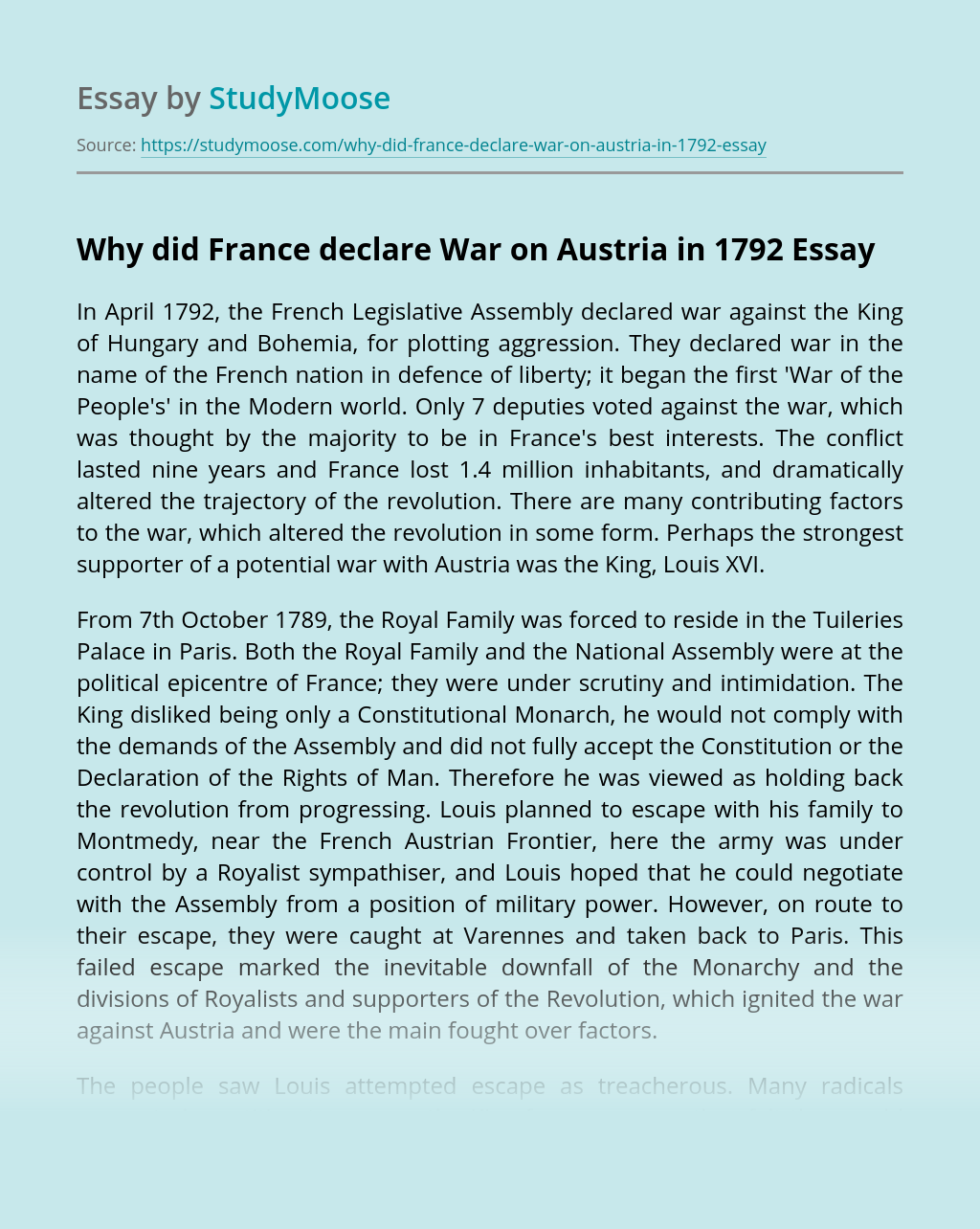