Don't use plagiarized sources. Get your custom essay on
“ English Civil War and French Revolution ”
Get custom paper
NEW! smart matching with writer

There was a direct conflict and struggle in determining each of their roles in governing the nation.

After the Tudor dynasty ended with the death of Queen Elizabeth in 1603; her cousin, King James VI of Scotland became King James I of England and thus began the Stuart lineage. Though he was influential in his homeland, he knew little about the English laws, institutions, and customs. James believed in divine right and consequently alienated the parliament who were accustomed to the Tudor’s “balanced polity”.

Parliament did however manage to keep the power of the purse and expressed their unhappiness by refusing the king’s money requests.

King James’ additional failure was stemmed from religious affiliations. The Puritans in the country wanted James to eliminate the Episcopal system of the church organization in which bishops or episcopos held a major role in the administration and replace it with the Presbyterian model. This model was used in Scotland, replicated after Calvin’s church in Geneva where ministers and elders played an important governing role.

However, their pleas were pushed away by James’ refusal because he realized in the Anglican Church, the bishops were appointed by the crown.

This gave the monarchy supreme authority over church and state. At this time there was a growing opposition of the king and now the Puritans joined in with other English gentry. Conditions continued to worsen under the reign of James’ son, Charles I. He went as far to dismiss parliament altogether from 1629 to 1640 after recanting his previous agreement to the Petition of Right. The document prohibited taxation without parliament consent, arbitrary imprisonment, quartering soldiers in private homes, and declaration of martial law in peacetime.

Charles collected taxes for his excessive spending without Parliament’s consent. Alienating himself further, Charles’ marriage to Henrietta Maria aroused suspicions about the king’s faith. She was the Catholic sister of Louis XIII of France and this upset the English Puritans. Charles attempted to introduce more ritual practices with the archbishop of Canterbury, William Laud. This struck Puritans as an effort to return to Catholicism. Charles’ fatal error was trying to impose the Anglican Book of Common Prayer to the Scottish Presbyterian Church, which caused many Scots to rebel.

Without the financial backing needed to raise troops, Charles was forced to call the disbanded parliament. From November 1640 to September 1641, the new Long Parliament created a series of laws to limit royal authority such as abolishing arbitrary courts, repealing the taxes the king collected without their consent and the passage of the Triennial Act, which made sure Parliament met at least every three years. Some were satisfied with these reforms while radicals pushed for even more change.

Charles tried to take advantage of this division by arresting some radicals including a large group led by John Pym. This final act made it clear that the king had gone too far which resulted in the English Civil War. Unlike the English Civil War, the French Revolution was closer to an uprising against the power of the monarchy and rich nobility by the peasants and middle class. Fifty years before the time the war broke out in 1789, France experienced a period of economic growth due to expansion of foreign trade and an increase in industrial production.

France was broken up into three unbalanced estates. The first and second estates were made up of the clergy and nobles, which dominated society and led lavish lives and paid little taxes. The third estate was made up of peasants who were not included in the nation’s prosperity. The taxes necessary to maintain and pay for the first and second estate’s luxuries heavily burdened the peasants. They constituted 75-80% of the population but consequently only owned 35-40% of the land. Their discontent and struggle for survival played a vital role in the course of the revolution.

The consumer prices rose faster than their wages, which resulted in urban groups unable to purchase necessities to live. A hardened resentment grew from both the lower and middle classes. Even the bourgeoisie were excluded from the social and political privileges dominated by nobles. At the same time, new critical ideas of the Enlightenment deemed attractive to groups aggravated by the monarchial system. The majority of French society was fed up with the old, rigid order based on estates and privileges and responded by taking drastic action against the regime.

Crisis struck in 1787 and 1788 with bad harvests and the beginning of a manufacturing depression. This led to food shortages, rising prices and unemployment. One-third of the entire French population was poor. These people saw the lavish lives of the first and second estates, which led to increased criticism of their existing privileges. The parlements gained new strength and judges took on the role of “defenders of liberty” against the arbitrary power of monarchs. However, these efforts failed when they pushed their own interests and often blocked new taxes.

The immediate cause of the revolution was the entire collapse of government finances. The court’s luxuries and costly wars took a toll and their expenditure grew to new heights. The government reacted by borrowing money, which created a huge interest on the debt they already owed. Charles de Calonne, controller general of finance, proposed a complete reconstruction of the fiscal and administrative system of the state. He convened an “assembly of notables” to gain support, but they refused to cooperate and once again their efforts at reform failed entirely.

The French king, Louis XVI was forced to call a meeting of the French Parliamentary body, known as the Estates-General. At this point, the government was basically confessing that the consent of the nation was required to raise taxes. Louis initially thought this would be just a way to solve the immediate financial issues of the monarchy but actually ended up reforming the government completely and destroying the old regime. The revolution was officially initiated on July 14, 1789, when several starving, working people of Paris stormed into the castle of Bastille, demanding change.

Despite their differences, the French Revolution and English Civil War stem from unrest of their citizens and their desire to transform and improve society. Clearly the main problem lay within the corruption and greed of people with authority. The powerful have influence over the political, social, and economic facets of society. However, in these instances, each monarchy failed to compromise by ignoring their own citizen’s frustrations and struggles. This left the civilians no other choice but to begin a revolution. 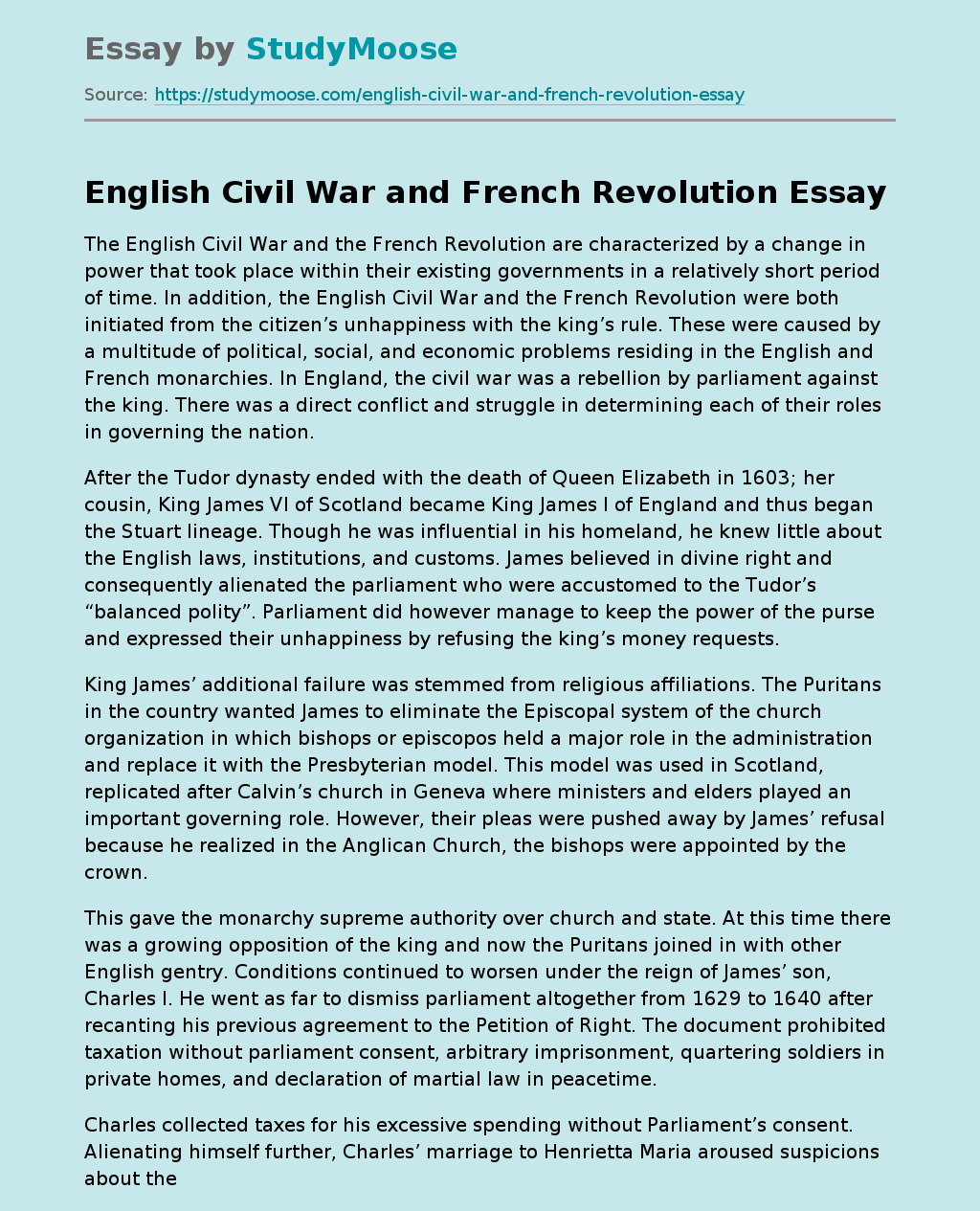