Turn in your highest-quality paper
Get a qualified writer to help you with
“ Minoan and Mycenae Civilization Comparison Essay ”
Get high-quality paper
NEW! AI matching with writer

This allowed Minoans to be exposed to other cultures through trade and imports, which influenced their own culture. As a result, Minoans were the forerunner of Greek civilization and considered the first European civilization. While the Minoans used their navy for protection, the Myceneans used their military for expand their empire. Ultimately, Myceneans took over the Minoans. Trade appeared to be more crucial to the Minoans while the military was critical to the Myceneans.

There was a fusion of cultures between the Minoan culture with Helladic culture of mainland Greece, which evolved into Mycenaean civilization. They shared similarities and differences such as geography technology, trade, art, military, government, and society. After the ruins of both civilizations were studied, the influence of both cultures on each other is evident in which their cultural legacies changed or survived. First, one difference of the Minoans and Myceneans was the geographical location regarding different terrain and surroundings. For example, Minoans were located on an island called Crete which was surrounded by water.

The climate was great for agriculture with mild winters and warm summers. In addition, the land was fertile, which produced food for the people and for export. As a result of Crete’s abundance of materials, the Minoans where able to trade many objects and natural resources with other countries such as, Egypt and the Middle East. The Minoans traded with neighboring civilizations by boat.

In contrast, Mycenae was located on the main land of Greece. Instead of trading, Myceneans concentrated on warfare. Second, one similarity between both civilizations was their military. Both relied on their military, but differed on the way the military was utilized. Third, the Minoans built a strong navy, but did not use excessive force. The Minoans used their military for protection in which they could interact with others, such as Egypt and Mesopotamia, without fear of war. In contrast, the Mycenaeans used excessive force to expand their civilization. For example, they took over the Minoans during the peak of their civilization. Their societies differed in principles, in which the Mycenaean’s society was influenced by military advancements, and the Minoans society was affected by technology, art, and trade. Fourth, the Mycenean cities were heavy fortresses while Minoans were surrounded with art of everyday life. Both appreciated art. Minoan art included pottery and art of everyday life while Mycenean art focused on hunting and war.

They also had different views on government. Fifth, another difference between Minoan and Mycenean civilization focused on the government and society. The Mycenean society was monarchial. The monarch ruled the administration as a head bureaucrat. The Myceneans were ruled by a king who accumulated wealth and power. Their king was a warlord who focused on battle and invasion. In contrast to the monoarchy, archaeological evidence demonstrated a decentralized culture without powerful warlords or centralized authority in the Minoan. In addition, the wealth was shared with the rest of society compared to the king of the Myceneans, who became wealthy. Initially, the Minoans did not have a hierarchy, which was evidenced by tombs without hierarchal structure. Later, the Minoans established an authority focused on a king while developing a bureaucracy. A social hierarchy separated people into nobles, peasants, and slaves.

Sixth, at the height of Minoan civilization, women played a powerful role in society, which was not noted among the Mycenean civilization. Today, women are gaining more opportunity and obtaining powerful roles in society. Seventh, there was an interruption of Minoan civilization in which it was debated that this was invasion of Mycenean civilization or natural disaster, such as the Thera volcano eruption or tsunami. The evidence of Mycenean cultural influence on Minoan art and trade is a strong indication. The Minoans were a mercantilist people involved in trade, but their culture after 1700 BC demonstrated organization without military aristocracy that was shown later. In fact, large number of weapons were found in the Minoan royal tombs, which may indicate the Mycenean influence. Societies throughout the world have continued the principles of both ancient societies Both ancient civilizations share similarities and difference in the importance of trade, military, art, technology, government, and society.

In conclusion, many changes impacted Minoan civilization after the Mycenean takeover of the Minoans in which some cultural legacies of the Minoans survived. The Minoan and Mycenean civilizations shared differences and similarities that have influenced their cultural legacies. Many factors, such as technology, trade, geography, art, military, government, and society, changed or continued with each civilization. While the land where the Minoans lived is deforested compared to the abundance of natural resources that existed in ancient times, a culture evolved that has been the foundation the first European civilization that has been changed, destroyed , and survived. It has a legacy that has contributed to the world and its local region through trade, military, art, technology, government, and society. 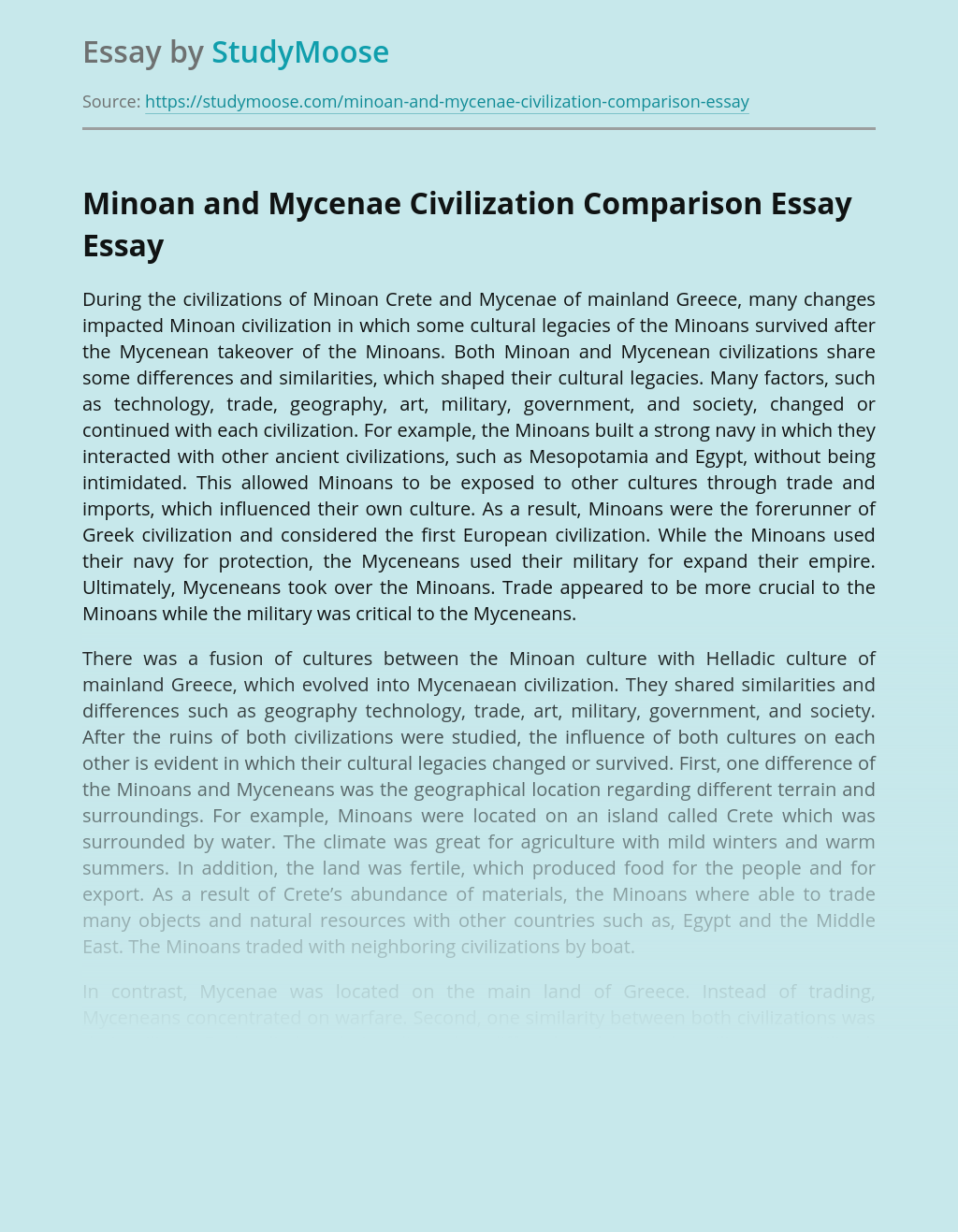 Turn in your highest-quality paper
Get a qualified writer to help you with
“ Minoan and Mycenae Civilization Comparison Essay ”
Get high-quality paper
Helping students since 2015
Stay Safe, Stay Original