Comparison of Housman's and Updike's Poems

Although “To an Athlete Dying Young” by A.E. Housman and “Ex-Basketball Player” by John Updike are both about the reflection of honorary greatness achieved in their lives as athletes, the speakers possess different views and attitudes towards their characters in each poem. In “To an Athlete Dying Young” the speaker shares a positive reflection of the characters accomplishments that takes place due to the death of that character dying at a young age: “To-day, the road all runners come, / Shoulder-high we bring you home, /And set you at your threshold down, /Townsman of a stiller town.

Don't use plagiarized sources. Get your custom essay on
“ Comparison of Housman’s and Updike’s Poems ”
Get custom paper
NEW! smart matching with writer

” (“Athlete”5-8). In “Ex-Basketball Player” John Updike speaker reflects upon Flick Webb’s past achievements in the as a high school basketball player: “Once Flick played for the high-school team, the Wizards / He was good: in fact, the best.” (“Ex-Basketball”13-14). Though the speaker praises Flick Webb’s on his past achievements as an athlete, the speaker sets a tone of a man that has not achieved much during his adult years: “He never learned a trade, he just sells gas, / Checks oil, and changes flats.

The picture painted with words by the speaker in “To an Athlete Dying Young” portrays a story of an athlete receiving praise and honor for their life and accomplishments achieved. Housman’s speaker describes the early death of the deceased as: “Smart lad, to slip betimes away / From fields where glory does not stay” (“Athlete” 9-10). Throughout the poem, the speaker gives praised to the deceased by showing his appreciation and honor that he holds for young deceased athlete: “The time you won your town the race / We chaired you through the market-place; / Man and boy stood cheering by, (“Athlete”1-3).

The speaker’s respect and admiration for the deceased athlete in “To an Athlete Dying Young” is opposite from the speaker in “Ex-Basketball Player” by John Updike, views about Flick Webb. The speaker describes the life story of Flick Webb, an old high school athlete who was remarkable who is now just a gas station attendant: “Once Flick played for the high-school team, the Wizards / He was good: in fact, the best.” (“Ex-Basketball”13-14). “At Colonel McComsky Plaza. Berth’s Garage / Is on the corner facing west, and there, / Most days, you’ll find Flick Webb, who helps Berth out.” (“Ex-Basketball”4-6). The speaker’s attitude towards Flick Webb sets a tone of lack of motivation and disappointment: “Flick stands tall among the idiot pumps-” (“Ex-Basketball”7). The speaker believes that Flick’s potential and talents should have assisted more towards him becoming successful instead of just being a gas station attendant. “He never learned a trade, he just sells gas, / Checks oil, and changes flats.” (“Ex-Basketball”19-20).

In both poems, the speakers give praise to the athletes’ accomplishments in sports, expressed in lines: “The time you won your town the race / We chaired you through the market-place; / Man and boy stood cheering by, / And home we brought you shoulder-high.”(“Athlete”1-4). “Once Flick played for the high-school team, the Wizards / He was good: in fact, the best. In ’46 /He bucketed three hundred ninety points, / A county record still. The ball loved Flick. / I saw him rack up thirty-eight or forty / In one home game. / His hands were like wild birds.” (“Ex-Basketball”13-18). Both speakers had a extreme appreciation for the athletes craft in sports. In contrast, Housman’s speaker revealed positive thoughts and reflection of the deceased athlete.

The speaker held very high regards for the deceased athlete and felt that the athlete’s accomplishments and life will forever be remembered by the speaker. Although the speaker in “Ex-Basketball Player” did have an appreciation and interests for Flick’s athleticism, the speaker as well held a feeling of disappointment for Flick. With flick being such a great athlete, made the speaker believe that more could have been achieved by Flick during his life instead of just being a gas station attendant.

Comparison of Housman's and Updike's Poems. (2016, Apr 15). Retrieved from https://studymoose.com/comparison-of-housmans-and-updikes-poems-essay 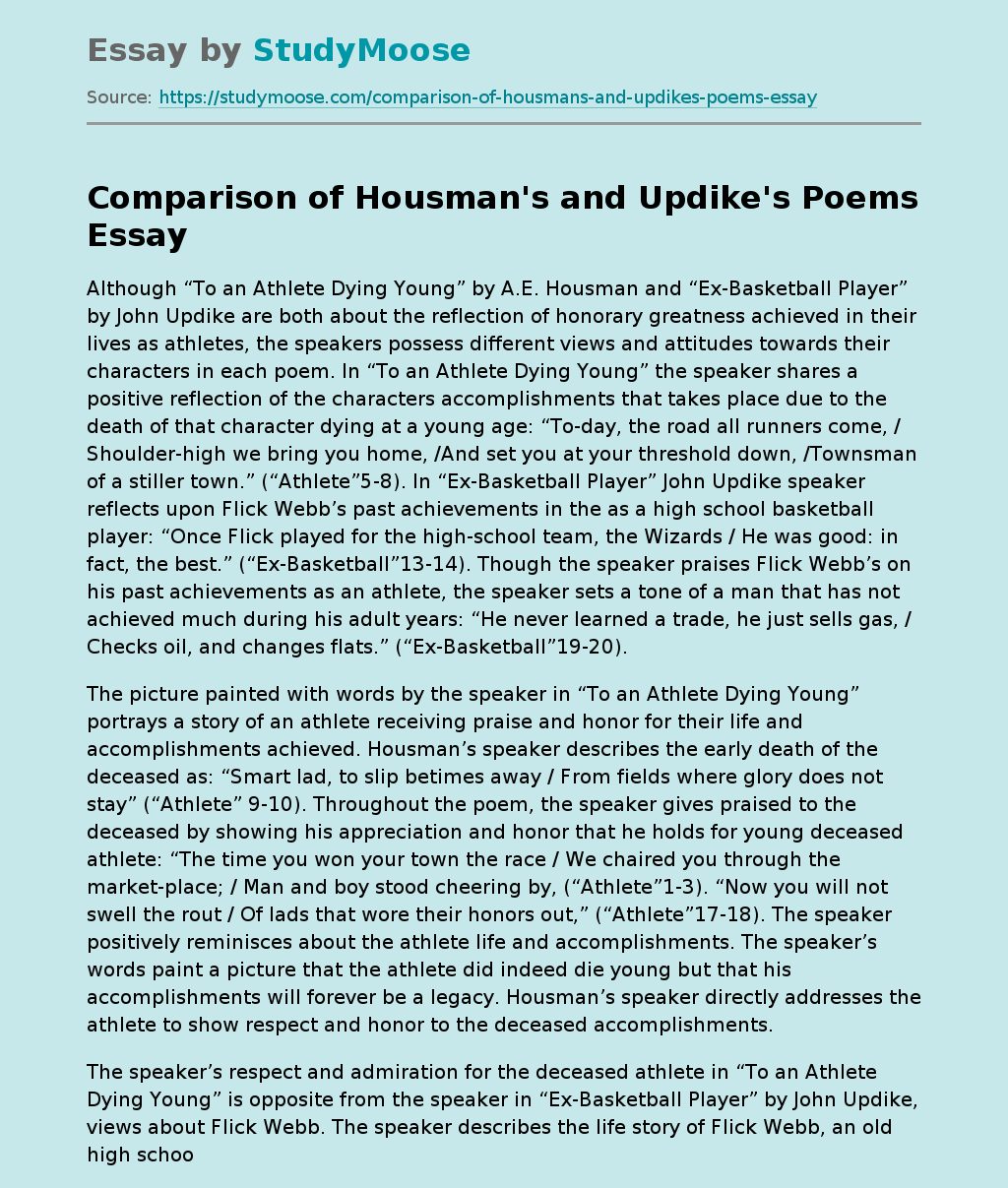