I understand “language diversity’ to refer to the use of a vast range of different languages (an expression of communication). In the case of the prescribed article, this is applied in the context of South Africa as a country. It is our cultural diversity and by extension, our “rainbow nation” image that is one of the first things foreigners associate with us as a country… well, that and Madiba and Bafana-Bafana. It is an image we sell to the world, of the once divided country who overcame the crippling stigma of apartheid to rise as one people, one nation.

Turn in your highest-quality paper
Get a qualified writer to help you with
“ Language diversity ”
Get high-quality paper
NEW! AI matching with writer

This is one reason why it is so painful to see the statistics listed in the article, that a staggering third of the people who participated in the study felt threatened by other cultures. The study attributed this partially to the large number of people in this country who fall into the lower income bracket, who may not necessarily come into contact with other cultures.

While I accept that this may be the case in some instances, I find it very difficult to see this as the main, contributing factor. Apart from our rainbow nation image, South Africa has a reputation for being the land of possibilities. Where other countries may turn a blind eye to the suffering in other parts of the world, leaders like Desmond Tutu and Madiba have never been afraid of speaking up about the injustices done to people. We have become a country of refuge, for people who simply cannot survive in their own country of origin.

The incidents that have been reported in the news recently show us that there is definitely a feeling of being threatened by other cultures. Foreign owned businesses under attack and people fleeing for their lives. One cannot attribute this to not having contact with other cultures.

I think it is a combination of factors, one of the most pressing being the overwhelming levels of poverty we see in these communities. Desperation breeds intolerance and ultimately, violence. Another is the legacy that has been left behind by apartheid. Fear and discrimination of differences. In the light of the present political climate, it is people like the Greaves family who may just be the example we look to; of how we need to move forward as a nation. People who do not let culture and race be the determining factor in who they choose to love and call their own; who embrace the unifying element of humanity over other dividing differences, as difficult a process as it may be. Taking the step to adopt across cultural and colour divides would present many challenges and questions like these could be raised:

1. How do families who adopt children from a different language background cope?

I imagine that it must be a very difficult process for both the child concerned and the family, to assimilate oneself into a different culture. Different language and cultural backgrounds determine not only the spoken word, but our behaviour. Older children especially, who have been raised in one culture and then removed and placed in another, could have major problems adjusting and miss-communication between the members of the new family unit could occur. Language and culture are intertwined, and something as simple as lowering one’s gaze in the presence of an elder out of respect could be misinterpreted as insolence, or fear, etc. This is just one example of why it is so important for prospective parents to research and learn about the culture surrounding the children they would like to adopt.

An article I read online (find at: http://family.findlaw.com/adoption) suggested some creative ways for adoptive parents who want to create a family life more inclusive of their child’s culture/language. Some of these suggestions included:

Becoming members and participating in multi-cultural support groups Participating in religious services.
Researching and including food and festivals into family life. Learning the child’s birth language.
Placing the child in a school environment that encourages and celebrates cultural diversity, with students across the culture spectrum.

How do people deal with the issue of multiple languages in the same family?

Christina Bosemark, founder of the Multilingual Children’s Association, suggests the following ways where multilinguism in a family can not only be managed, but fostered:

1. Both parents should be in full agreement of which languages will be spoken in the family home. It could be detrimental to the family dynamics if an insecure parent feels excluded by virtue of his/her spouse speaking to their child in a language that he/she doesn’t understand. 2. While it is an exciting prospect to learn a new language, one needs to remain realistic about the time it will take. Research indicates that children need to be exposed to a new language on average of 30% of their day, in order to be fully conversational in it and to learn the finer nuances of it. 3. Create a plan and follow it. If the parents are learning their adoptive child’s language of origin, they need to figure out the best way for them to do so and move forward with it. Conversational language classes, formal lessons, etc.

If it is the child who is learning a new language, look at the age of the child and their interests as a starting point on which methods may be best for them. Younger children learn best in context to their real-world life, their environment. Immersing themselves in the new language, speaking and being spoken to in it; is often the best way for them to learn it speedily. Teenagers learn differently to younger children. It is important that they be able to choose the learning methods best for them. Most do not learn in a linear fashion anymore due to the digital world they have been brought up with, this should be a point considered when deciding on the best methods moving forward. 4. Networking is not only a domain of the workplace. Building a support network with other individuals who are also raising their children in the same languages as you are, are an invaluable asset.

Apart from providing emotional support and sharing knowledge, your children will benefit from learning the language from others their own age through play-dates. Research constantly shows us that children learn best through play, so books, movies, toys, etc., in the new language are fantastic educational tools. 5. Lastly, patience is the greatest virtue when embarking on such a difficult journey. I presume there would be many hurdles on the path to a happy, truly multilingual family. For every setback, it is important to remind oneself about the bigger picture. If a plan is not working, never be afraid to re-examine and work out alternatives. All families are not the same and what works for one may not for another.

Is adoption across cultural, ethnic and language divides a good thing?

This question is obviously very loaded, not to mention, an extremely subjective one. I think that it boils down to the particular couple doing the adopting. People like the Greaves family obviously do not think that the colour of a person’s skin defines them as an individual; nor is it something to consider when it comes to the choice of whom to love. However, not all people feel the same way.

Research shows that for many South African couples, the choice of adopting a child from another culture is based on availability. Statistically, there are more children from black backgrounds and for some reason, coloured boys, not girls; than there are white, Indian, Chinese, etc. People looking to adopt within their race can be put on a waiting list for years before they can find the baby of their choosing, if at all.

From my own family, I know of a few people who have chosen to go the adoptive route, after having tried unsuccessfully to have children of their own.

One couple flew to Pakistan and went through the costly and long wait to adopt a baby who would fit into their Indian-Muslim family, a child who wouldn’t raise eyebrows in their community.

Another distant cousin flew to Chechnya to adopt. She adopted two boys, at 4 year intervals. In her case, the process was even longer and even more expensive. Her first son was adopted as an infant but the second son was adopted at the age of 5. He had memories of his first family and the war-torn country he had grown up in. Also, he had lived in an orphanage for the last two years of his life and had become, like many children do, “institutionalised” in his demeanour and behaviour.

Back in South Africa, they struggled to help him with processing his insecurities and difficulties. At meal times he would eat until he became physically ill because as much as they reassured him that they would always have food available, his memories of near starvation haunted him. His adoptive mother tried everything to get him to bond with her and see her as a parent but beyond acknowledging them as a provider to his physical needs, he refused to engage with her and her husband. After many, many years of therapy and work, they are now in a much stronger place as a family.

I have heard the reasoning, of how it places a lot of pressure on parents and their adoptive children when there are race differences within a family. Of the communities that can be cruel and the challenges it presents. I remember when an Indian, Muslim friend of mine and her husband adopted a little black boy. An old aunt of hers wept openly, and implored her to consider the consequences of her actions. When her son grew up, her aunt reasoned, who in their community would give their daughter’s hand to him in marriage?

I hear the reasoning but personally speaking, I applaud the couples and individuals who do it anyway. If we are truly going to build a better world where we see people as people and not as merely a representative of a particular faction, it starts with families like these. Success and happiness are surely sweeter when one knows that one had to work at gaining it.

And there are many advantages to having a family that is multicultural too. In response to any bias they may face from outsiders, probabilities are that a family that is multicultural will be a very close one with the children feeling very supported by their parents. Children from these homes are taught acceptance and tolerance of differences. Research shows that children who grow up in a multi-lingual home develop the ability to be flexible in their thinking abilities, probably as a result of receiving and processing information in more than one language. People who come from multi-cultural homes are often rich in heritage and multi-faceted in character.

The question to adopt across divisions is ultimately a very personal one. A person should look very carefully at who they are as individuals before taking the leap. As difficult as it may be though, I’m sure any family who have done so will tell you that the wonderful family they created was definitely worth the challenges they faced. 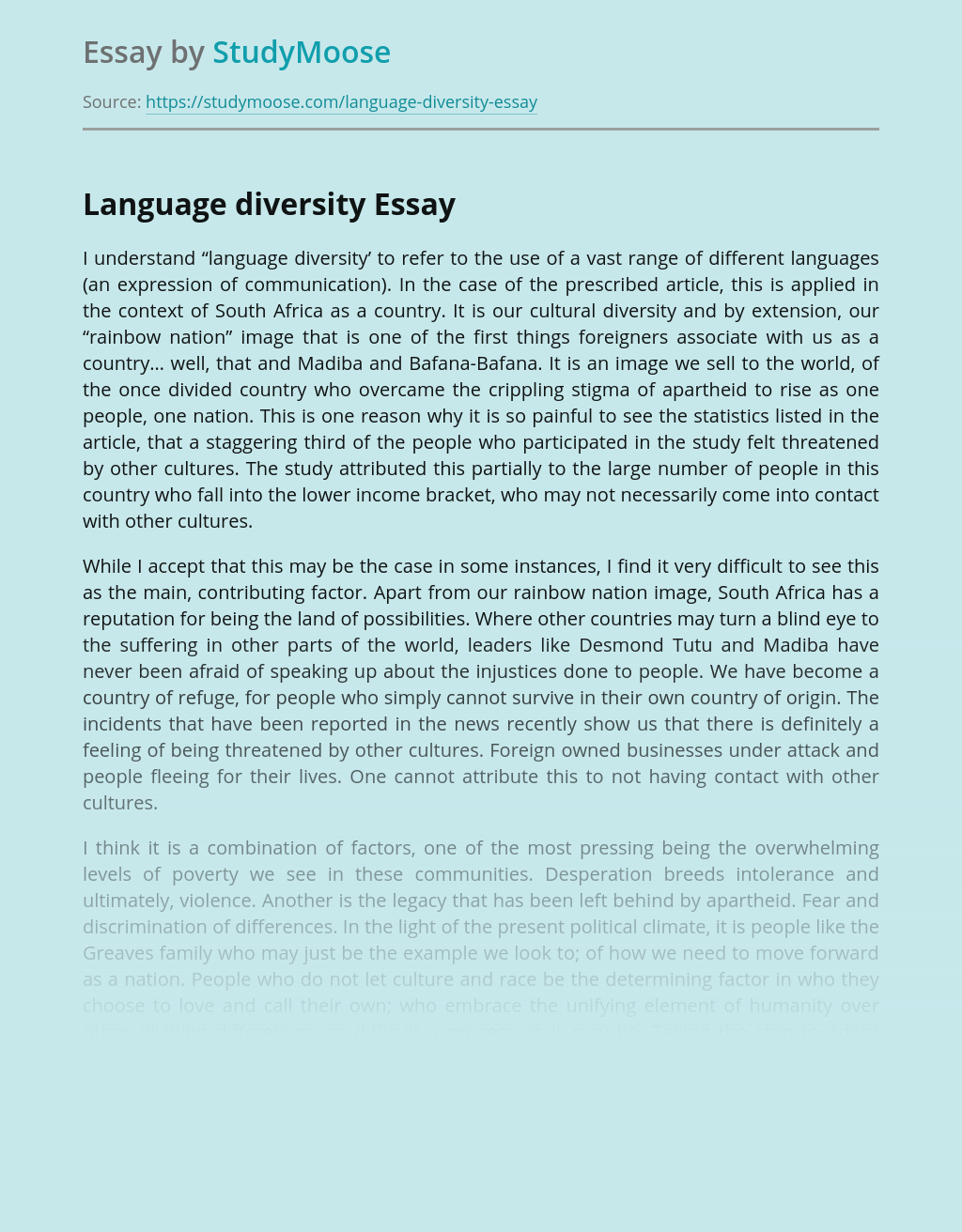 Turn in your highest-quality paper
Get a qualified writer to help you with
“ Language diversity ”
Get high-quality paper
Helping students since 2015
Stay Safe, Stay Original