Diversity Issues in the Workplace

The world is changing and becoming more globalized, especially with the fast growing rate of technology, people who live far away feel closer than they are. Since the world is changing, so are things in it, organizations is one of how things are moving faster. Organizations are no longer run in one region, country or for one market, they are now multi-cultural and diverse in nature. It therefore require special skills to manage and be able to teach employees to properly respect and value people’s opinions, sexual orientation, culture and beliefs to avoid diversity problems.

Turn in your highest-quality paper
Get a qualified writer to help you with
“ Diversity Issues in the Workplace ”
Get high-quality paper
NEW! AI matching with writer

Diversity is basically defined as acknowledging, understanding, accepting, valuing, and celebrating differences among people with respect for age, class, ethnicity, gender, physical and mental ability, race, sexual orientation, spiritual practice, and public assistance status (Esty, et al. , 1995). In work place, I will personally define it as difference between people working in an organization; it could be their ideas, beliefs, language or even their culture. These factors affect one’s way of thinking, and can even determine their work performance.

Proficient in: Diversity In The Workplace

Taking for instance lateness at work, it is obviously a bad working habit but in some parts of Africa or Asia, it is a normal to be fifteen or twenty minutes late, this habit is one of the worse working habits in America. That is cultural difference. Workplace diversity could also refer to human quality or ability that is different form our own example. Workers sometimes treat or favor co-workers who they are more related or have some affliction to in a nicer way than other people.

Coming from a country (Ghana) where the power distance is very wide, there is no way you can call your boss by the first name, you have to address them with their title at least. But in America where power distance is no issue, where you can play ping pong with your company president at break and call them by their first name, I found it hard to fit in. I always call my boss with either sir or Mr. that made him feel I wanted to be distant away from him, and my other managers never liked me until they got to ask me questions about my culture and got to know me more. Another big diversity issue in every U. S organization is the language barrier.

This issue is due to the fact that most U. S companies hire workers who have English as their second language or got exposed to English in America. Workers like this will always have problems getting work done properly due to clarity, because they might have difficulties understanding all instructions they have been assigned to, it will cause misunderstanding and eventually low productivity. If an Indian manager who has a “thick accent” gives instruction to an American associate, the probability that the American might not get the job done right is high.

Globalizing and diverse organizations have become a norm these days and organizations are better off hiring workers that are bilingual and can translate for workers that have problems with language. If this is not done companies may lose highly talented people from different backgrounds. In the movie “crash” the Arab store owner could not understand exactly what the Mexican lock repairer meant by replacing the door and that caused him to lose everything in his store, I am pretty sure if his daughter who is more fluent in both the Arab language and the English language the situation would have been totally different.

Political and religious beliefs could also be another form of diversity issue in the workplace. It is always going to be hard for Christians to work and socialize with Buddhist or Muslims, because they think they involve in bad practices, and might even reject their ideas. Some employers of companies also try to impose their beliefs on employees. Example a Christian might not allow a Muslim to take breaks to pray in their season of fasting (Ramadan), it would also be a challenge for a Christian to work for a Muslim.

This is religious diversity issue, if not properly managed might reduce organizational productivity or eventually it to close down, political diversity is the same as it in religion, Republican view of ruling a nation is different from that conflict Democratic, and it’s sometimes brought into managing an organization and that might cause misunderstanding. Since these two parties have different views one will always reject the idea of another in decision making. This form competition is not healthy for any organization and must be managed with care.

To avoid this issues in organizations law of equal rights must be enforced to protect everyone religious, political or even sexual opinions and mandate that employees cannot force their political choices and religious faiths on other employees. A Christian employee can work with a Muslim because the two should put the goal of the organization first and leave their difference outside of the workplace. Also the Federal and State equal opportunity legislation make discrimination in workplaces illegal.

Workers and managers should be ready to accept and work with people with different sexual orientation and not to take advantage of them. Formally it was acceptable to fire or refuse a gay or lesbian with the globalize nature of workplaces, human and civil rights on the rise, organizations should be able to draft laws that can protect people like that. After all they require two workers to deal with their differences outside of the organizations; their personal life outside of the organization should not be a problem to the organization, unless that employee is using his orientation to harass other employees.

It is always good to have a diverse organization, and there is no doubt is comes with problems, but how do managers of these organizations manage diversity? As pointed out earlier, it will be effective for employers to hire professionals that deal with diversity issues to help them with the challenges involved for example having translators to help workers with language problems will help organizations tap out the talented workers. Also organizations should not over react and base their recruitment solely on diversity issues.

Example, hiring with the idea of hiring workers from all walks of life will definitely be more of a challenge than an advantage. “According to Lawrence Herzog of HCareers, managers face challenges when new employees from diverse backgrounds interact with long-standing employees. ” Another powerful way to deal with diversity in the workplace is by creating avenues like meeting social gathering and business meetings, where every member must listen and have the chance to speak, are good ways to create dialogues.

Managers should implement policies such as mentoring programs to provide associates access to information and opportunities, workers can socialize, talk to each other and get to know more about each other’s culture, beliefs, and ideas. There might be something they could learn from each other that might positively benefit the organization. This is a strategy my formal managers in my previous job used and I think it really helped solve the diversity issue between us.

I spent time with them and they got to know about me more and began to understand the way responded to certain things at work. Having a diverse workforce is due to our changing world, and if it’s managed effectively, organizations can benefit positively and have a large pool of different ideas to make the organization very competitive in all markets. Good diversity management does not only benefit the organizations it creates a safe and comfortable working environment for workers; this benefits the organization as well because employees work with enthusiasm.

Diversity Issues in the Workplace. (2016, Oct 01). Retrieved from https://studymoose.com/diversity-issues-in-the-workplace-essay 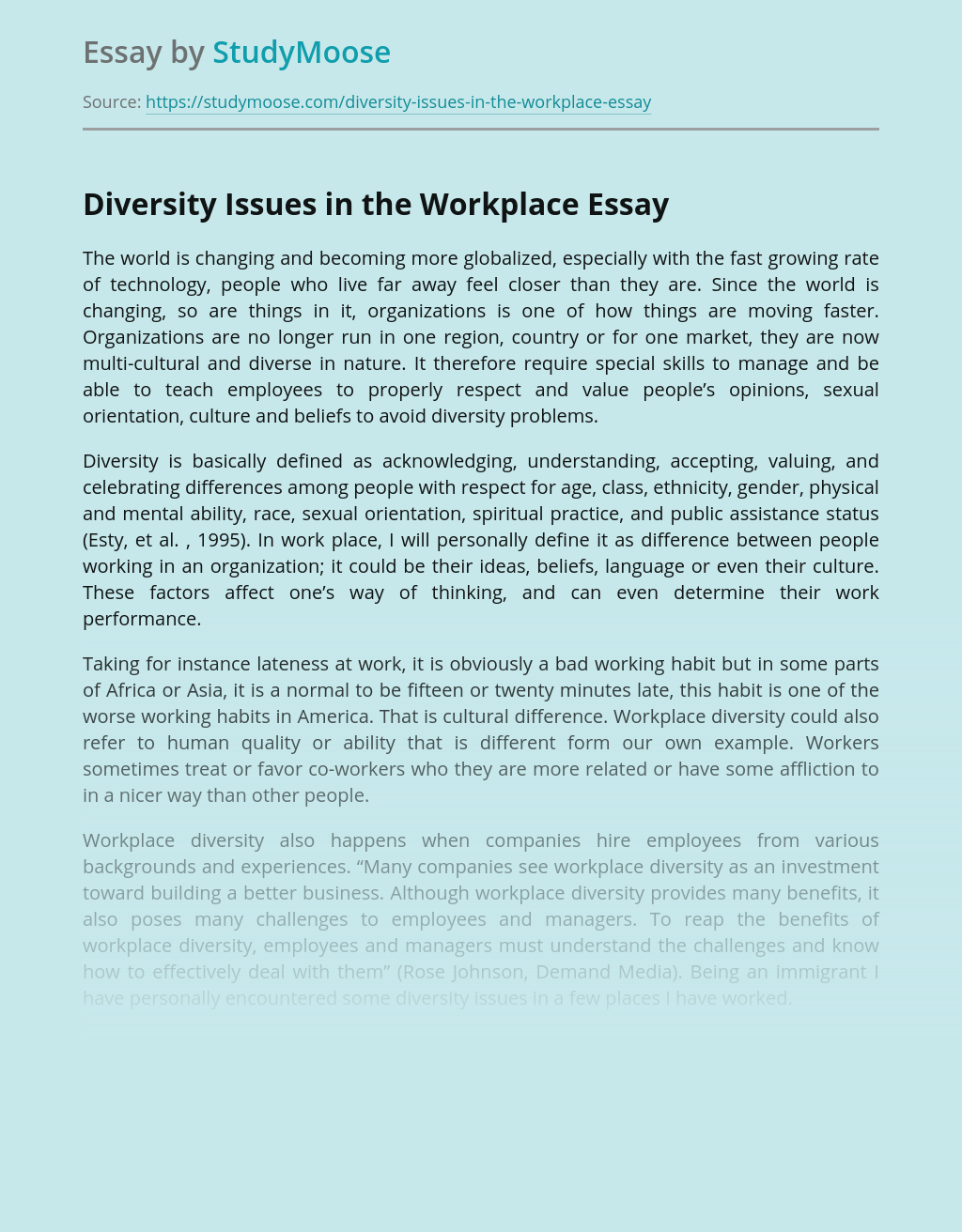 Turn in your highest-quality paper
Get a qualified writer to help you with
“ Diversity Issues in the Workplace ”
Get high-quality paper
Helping students since 2015
Stay Safe, Stay Original