There are an enormous amount of people in this world that we live in. All of these people belong to different cultures and societies. Each society has traits and customs that make it different from any other. Every society has their own way of looking at and dealing with certain situations. “Different societies have different moral codes” (Rachels 618). This claim is known as Cultural Relativism. “Cultural Relativism, as it has been called, challenges our ordinary belief in the objectivity and universality of moral truth.

Don't use plagiarized sources. Get your custom essay on
“ Cultural Relativism ”
Get custom paper
NEW! smart matching with writer

There is no such thing as universal truth in ethics: there there are only the various cultural codes, and nothing more. Moreover, our own code has no special status, it is merely one among many” (Rachels 618). It is clear that the answer to the question of ethics is, Cultural Relativism.

The subject of murder is probably the most common issue thought to be an absolute wrong. This is not always the case; murder has its place in many cultures.

Eskimo customs are very different from our own. “The Eskimos practice infanticide as well as the killing of elders. So there seemed to be, in this society, remarkably little respect for life” (Rachels 617). We view these customs as inferior to ours. But when you look at it, this practice is necessary for the survival of the of the group. The elders are too old to contribute to the group but yet they consume precious food. The males within the Eskimo groups are looked higher upon because they are the hunters and food providers.

The killing of female infants helps keep the ratio of males and females even. So many males die when there out hunting. If they didn’t kill the female babies then the females would dominate the group and they would never have food. Infanticide and killing of elders does not mean that Eskimos have less compassion for their children, nor less respect for human life, they just know that murder is sometimes needed to make sure that the Eskimos do not become extinct.

To continue with the subject of murder, there are many questions about murder that our own society faces. Within our own society there are conflicting views on topics such as abortion, capital punishment and, euthanasia. A lot of people consider these to be murder, to others they are needed in society. This shows that even within our own society, there is a conflict between what is morally right or wrong. There is an exception to every moral absolute. This eliminates the possibility of Moral Absolutism, and proves there is no universal truth . Another reason I believe in cultural relativism is because it helps us out in certain ways. “It can help alert us about the consequences of thinking that our preferences are based on a certain standard. Most practices that we follow are strange to our society, and it easy to loose sight on that” (Rachels 622).

“One example of this is funerary practices. The Callatians, according to Herodotus, were “men who eat their fathers”–a shocking idea, to us at least” (Rachels 622). But couldn’t this be looked at as a sign of respect? It can be looked at as they would want their fathers to be a part of them for the rest of their life, have their soul inside them. The Callatians believed this and is there reasoning for practicing it. Our society would never allow this. We would view this as disgusting and morally wrong. In our culture we either bury a person underground or burn a person after they die.

“On such a way of thinking, burying the dead can be seen as an act of rejection, and burning the corpse as positively scornful” (Rachels 622). Anyone of us would feel an extreme disgust just thinking about eating human flesh. And there is nothing anyone could do to make us eat it. But, Maybe this is only because our society views eating a human as a moral wrong. We don’t really look at the full picture.

“People believe in cultural relativism because when your dealing with morality, there is no objective truth. Right and wrong are only matters of opinion, and opinions vary from culture to culture” (Rachels 618). It is true that in some societies people believe in one thing and in other societies they believe another. With opening our minds, people will find that our feelings are not necessarily the truth. Our emotions will turn into understanding. With the knowledge of cultural rituals or the customs of each society, we will be able to accept the different things they do that are different to our own society. For example when we first learn that the Callatians eat the bodies of their dead fathers, people in our society are disgusted and outraged. Then these people learn that “this is done out of respect, and they believe that the Callatians dead father’s spirit will live inside them” (Rachels 622). This gives people who at first are outraged an understanding of why this act is practiced. Without Cultural Relativism this understanding could not take place.

“The moral code of a society determines what is right within that society; that is if the society says that a certain moral code is right, at least within that society” (Rachels 618). Some societies just have peculiar practices, in comparison to our own. The Eskimos consider it to be morally okay to kill the elderly and baby girls because they are acts practiced within their own society, for survival.

that there is no reason why if there is a moral truth, everyone must know it” (Rachels 619).

A second consequence that proves true to cultural relativism is, ” we could decide whether actions are right or wrong just by consulting the standards of our society” (Rachels 619). With cultural relativism, we have an easy way to know if an action is right or wrong. All we have to do is ask our society if that action agrees with our moral code. “Suppose a resident of South Africa is wondering whether his country’s policy of apartheid–rigid racial segregation–is morally correct. All he has to do is ask whether this policy conforms to his society’s moral code” (Rachels 620). This a nice and easy way to tell the difference between right and wrong. If a certain practice is wrong in our society we shouldn’t want to practice it anyway, it goes against our society for a reason. This would also stop us from condemning our culture.

Since there is no universal truth, there is no reasoning why a certain society is better than another. If we all would realize this it could lead to people having more open minds. We then can see that maybe what we believe in isn’t the right thing and that we only believe certain things because our culture tells us to. If we were born as an eskimo than we wouldn’t see anything wrong with infanticide or killing of the elders. These practices would be normal for us and they would be culturally right. When someone tries to tell us that the way we do things isn’t the right way we feel a sense of denial due to our upbringings. But if we stop and think about it, we may find out maybe our ways isn’t the best way to do things. 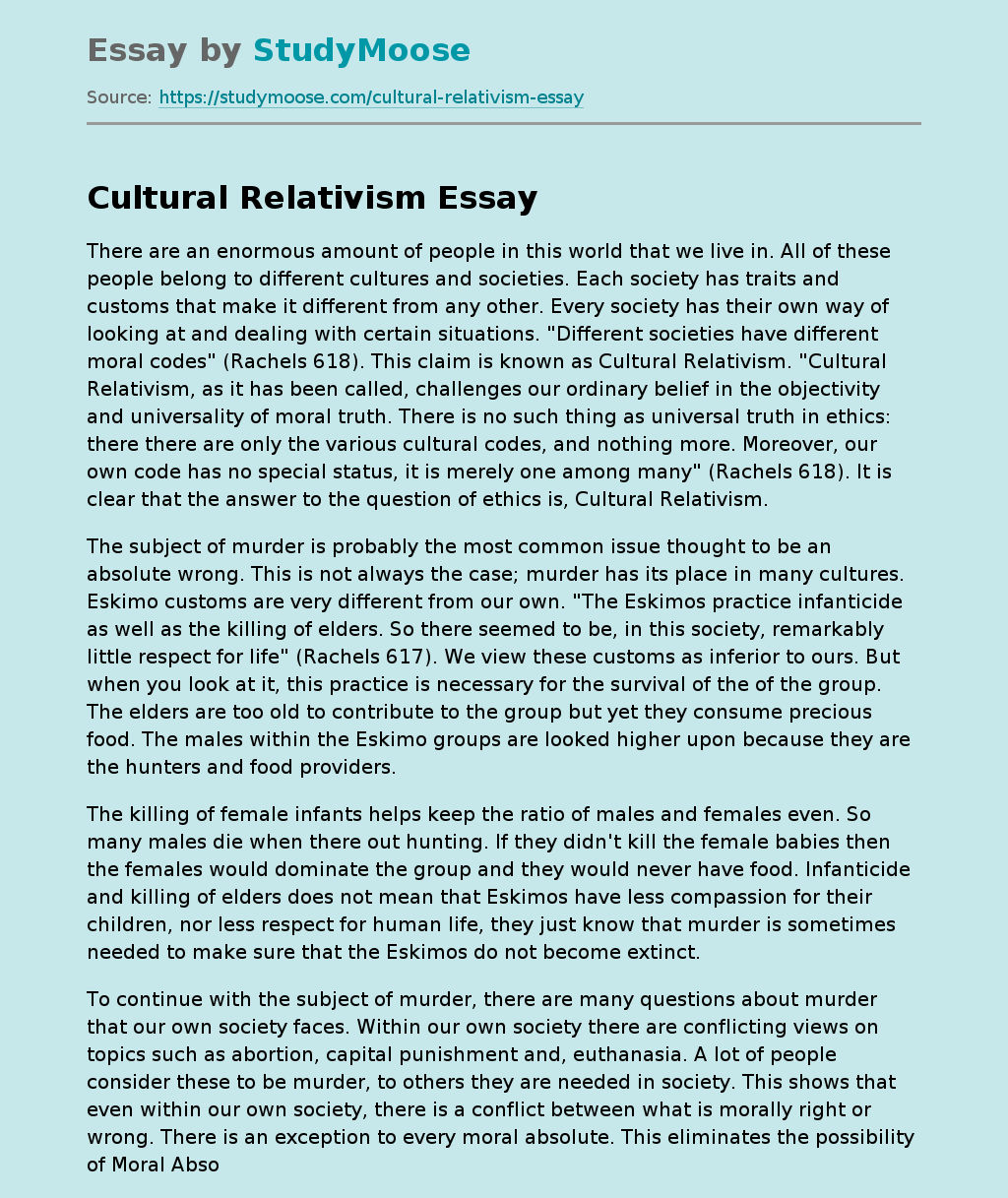