The family is universal Essay

A family is defined in the dictionary as “a social unit consisting of people who are related by blood or law.” There are many different definitions of family, some more specific then others; sociologists tend to use a more specific definition, which can vary according to the sociologist. There are different types of family; there are the more commonly-known ones, such as nuclear and extended, but there are also names for a mother-and-child family (matrifocal) and a father-and-child family (consanguineal). “Universal” means that it is found in all societies around the world; the “universal family” means a certain type of family that is found all over the world.

Don't use plagiarized sources.
Get Your Custom Essay on The family is universal Just from $13,9/Page

Since the definition of family can mean different things to different people, it is hard to tell if family really is universal, but some sociologists try to answer this question by studying the ideals of family and making very specific classifications for it.

” He added that the family “includes adults of both sexes, at least two of whom maintain a socially approved sexual relationship, and one or more children”. He stated that, to be a family, the unit must fulfil the four essential functions: socialisation, economic, sexual gratification, and reproduction. If they do not fulfil these functions, then they are not defined as a family, according to Murdock. These roles are important for the family to carry out because if they do not, they will not be able to produce children who are successful members of society, and if no family fulfilled these functions, society would cease to exist. Therefore, a “universal family” is needed to carry society on as it is now, otherwise it could just fall apart and society as it is now will disappear.

Although Murdock’s definition of family is very accurate, there are exceptions; there are cultures and societies that are not classed as a family, yet they fulfil all of the functions needed, for example, the Israel kibbutz. A kibbutz is a settlement where the looking-after of children is amongst the whole community; the parents don’t have to have an active role in their children’s lives as they might only see their children for a little while each week.

Two of the four functions are certainly carried out within the kibbutz- the sexual gratification and the reproduction- but it can be argued that the economic and socialisation functions are not exactly fulfilled as the parents do not see their children enough to help with the teachings of norms and values, and they do not support their children economically as this is shared within the community. It’s a matter of how the four functions are considered to see if this can be defined as a family; if the functions are taken very seriously, then the kibbutz cannot be seen as a family, but if taken loosely, then the parents would see their children enough to teach them and provide for them economically.

There are other cultures that are also not considered to be under the definition of family, yet they carry out the four essential functions as defined by Murdock; the Ashanti of West Africa believe that the infant’s father has no legal authority over his child, and that it is the mother’s responsibility to look after the child. It is her family, especially her brother (the child’s uncle) that shares this responsibility. The father is regarded as important though, because he is the one who is expected to feed, clothe and educate them.

The four functions are not seen to be carried out in the sense that the couple are together, as the parent’s rarely live together; the sexual gratification and reproduction are clearly fulfilled, it can be argued that the economic and socialisation functions are not carried out because the parents do not do these things together, the father is responsible for the economic persuasion, but the mother and her family is responsible for the main upbringing of the baby. Due to this, they are not considered a family in the traditional sense of Murdock’s definition.

In conclusion, a “universal family” that is the same all around the world in different societies does not exist; the exceptions to the definition of family will always create confusion as to what the definition of the universal family actually is. Murdock’s definition, although very accurate as he studied over 250 societies all over the world, doesn’t cover every aspect of family life; culture and society defines what a family is, and defining family by studying only a small amount of cultures all over the world isn’t going to be as accurate as it could be. “Family” may be a universal aspect of all cultures, but the definition of a family can suggest otherwise; it depends on how family is defined.

The family is universal. (2016, Jul 22). Retrieved from https://studymoose.com/the-family-is-universal-essay 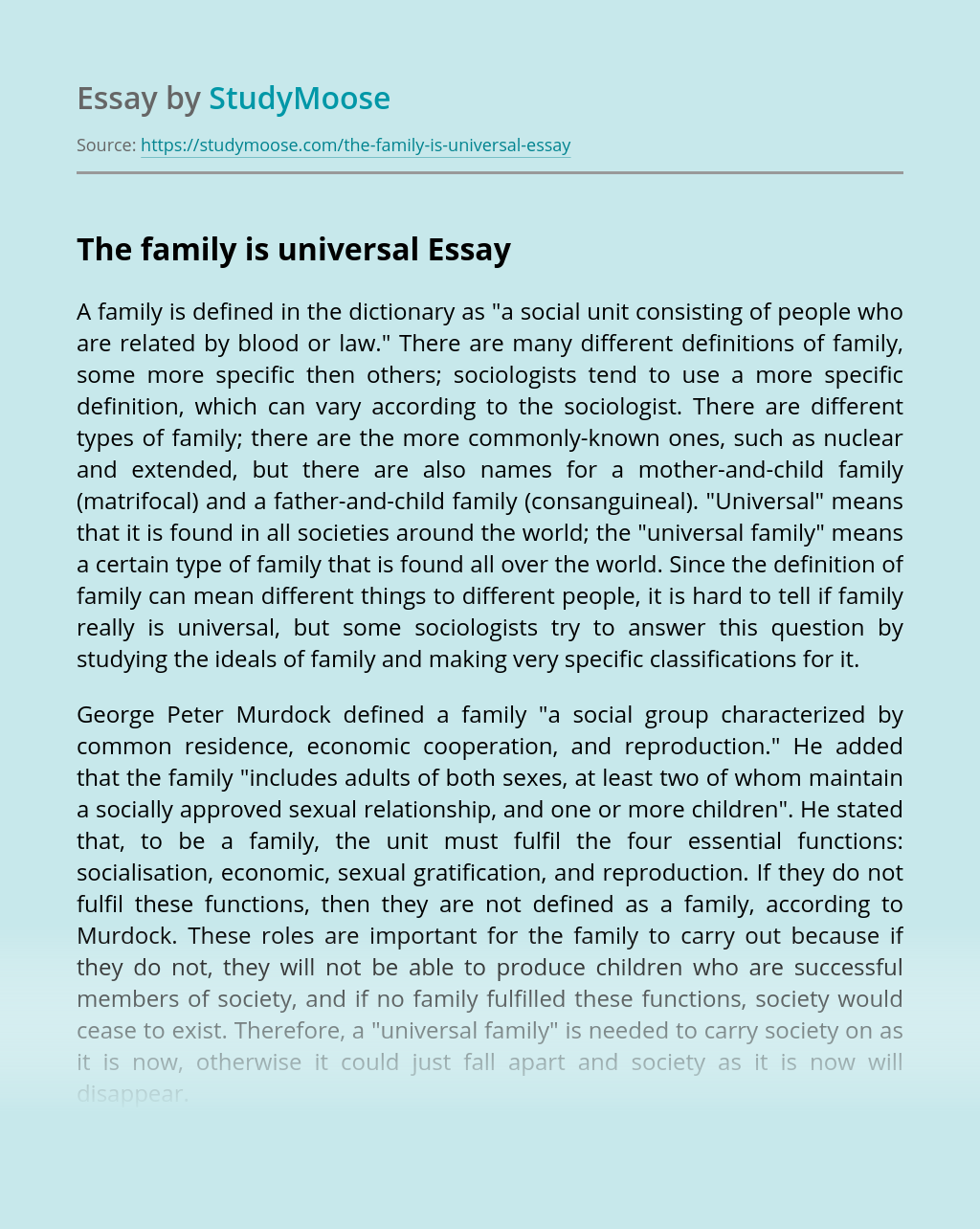