As all civilizations do, Athens and Sparta have provided many things for the modern world. And as everything else, both have their strengths and weaknesses. Athens focused more on education and the arts while Sparta revolved around military strength and battle. Because Sparta had such a massively influential military, we use tactics and strategies derived from them even today. They invented the Phalanx; a military formation of standing closely packed and moving forward slowly to break enemy lines. Spartans also conceived the idea of militaristic schools.

Don't use plagiarized sources.
Get Your Custom Essay on Athens vs. Sparta Reflection Essay Just from $13,9/Page

They were also the first to enforce conscription. The Spartans would also train their women to fight for themselves so they would be prepared to defend their homes and lives if there was ever an invasion. They also had many more rights than in the other city-states. They could own property, talk to other men aside from their husbands, and be physically educated. Women were not useless. This ideal planted the seed for our way of society today.

Athens, on the other hand, dedicated itself to the arts and architecture. Which we do see traces of in the works of the modern world.

The Athenians also practiced the first notion of democracy. Although, only men could vote. Women, children, nor slaves had that privilege. They were not citizens. Girls were educated (cleaning, cooking, and sewing) until the age of 15, when they were married off to an older man. Before Athens, Greece had no large architecture; only what was necessary. They developed the idea of having large, ornate building built from mud, clay, terra-cotta, marble, and eventually stone. Many of which still stand today. The Athenians used a system of terra-cotta tubing underground to distribute water throughout the city.

This led to a boost in the economy and the workings of plumbing today. They used trial by jury and produced some of the best philosophers of both their and our time. Despite being rivals, both Athens and Sparta (and the rest of the city-states in ancient Greece) came together for the Olympics. They put aside their differences for that short time and honed their dislike for each other into beating them at the games. The tradition of the Olympics has carried on for about 2700 years from ancient Greece. In conclusion, both were colossally important.

They both have their pros and cons. They’re so enormously different but both prospered because of totally different reasons. Sparta: strong, fierce, striving for absolute perfection in their citizens and warfare. And then Athens: philosophical, educated, and artistic. Their economy was largely different. As was their government, gender roles, social structure, education, and many other things. If they had put aside their differences and worked together, they would have been able to achieve far more than they did separately. 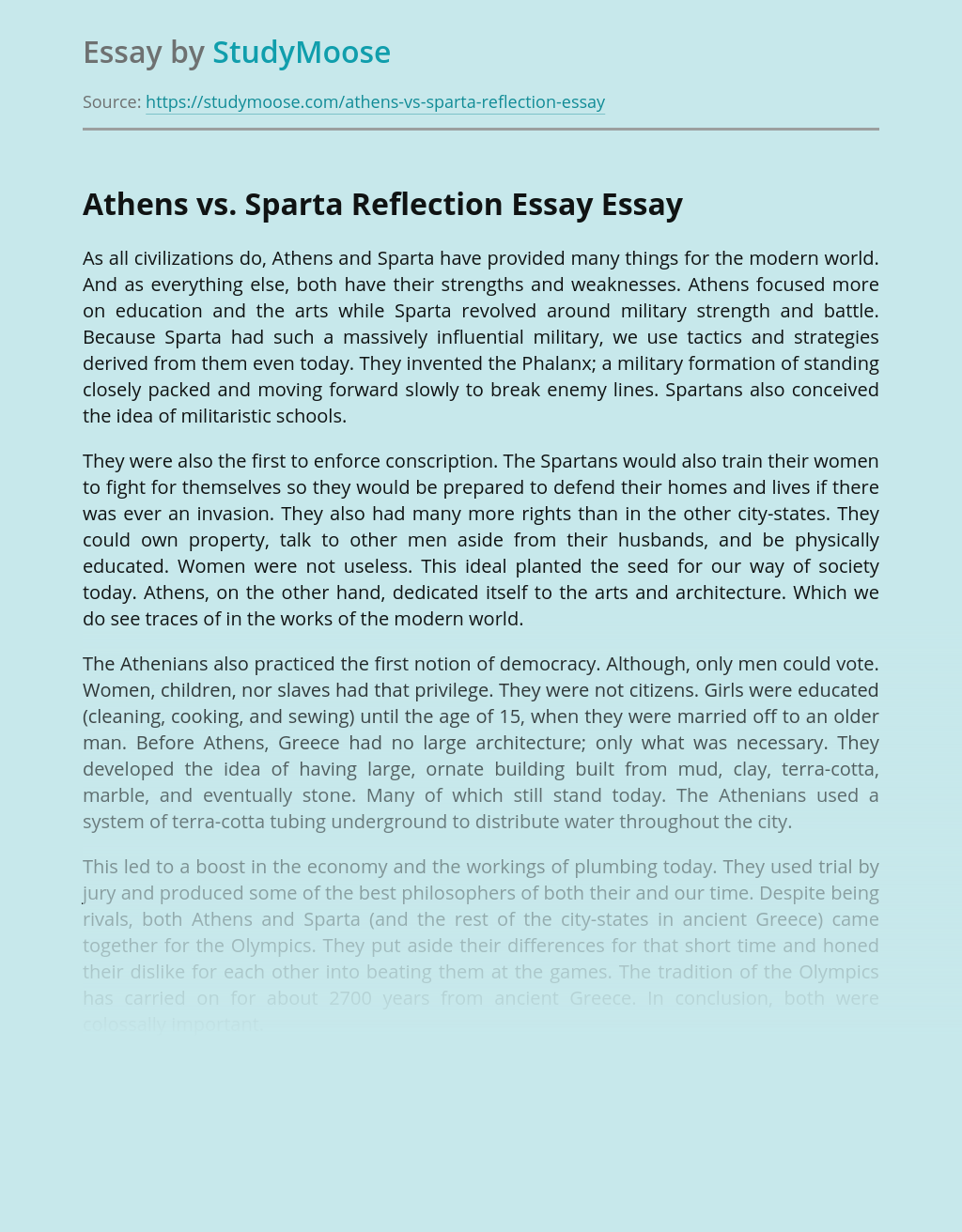 The chapter reads nothing like an interview or a one-on-one and is really Benjamin’s reflections on his conversations with Brecht. We read only Benjamin, and the Brecht Benjamin knew and presented with a giddy favour. It is July 4, 1934 and the duo are placed in Brecht’s sickroom we are told, where they contend on...

The Heart of “Joyas Voladoras”

“In our time together, you claimed a special place in my heart, one I’ll carry with me forever and that no one could ever replace.”-Nicholas Sparks (Dear John). The heart is a very abstruse thing. Scientifically, know the differences between a human’s heart and a dog’s heart. They know how many hearts a worm has...

Get Essay
The Buck Stops (and Starts) at Business Schools

For years it was thought that learning foreign language is getting more and more important because of the globalization. In order to acquire a new language as soon as possible, amounts of parents would like to let their children begin to learn new languages in kindergarten. There are many positive effects if people learn foreign...