Pericles and Martin Luther were both very influential people of their time. Even today their legacy’s live on and many times are still referred to. Without their effort in perusing with what they believed was right and keeping the motivation to change it, the world wouldn’t be where we are today. Pericles brought idea of democracy to Athens. He believed that the true value of Athens was found in the common good of the people. He worked to ensure that every Athenian had land and some link to their government.

Don't use plagiarized sources. Get your custom essay on
“ Pericles and Martin Luther ”
Get custom paper
NEW! smart matching with writer

People should represent equality and it was at the will of the people that Athens existed and flourished or failed. He came to this idea of establishing a democracy because of the past the not only Athens had, but Greece had also. In the beginning of the 5th century B.C, the Persian Wars had started (499-480 B.C.). Athens had agreed to aid cities that bordered the Persian Empire.

Darius the Great, the ruler or Persia, turned his attention to the Greek cities. Athens then defeated the Persian Army. Xerxes took control of Persia and burned Athens to the ground. Greece then rebelled and took another victory against Persia. At this time, Greece had an opportunity to blossom but it was not one unified country. Pericles rose to power to strengthen Greece. In 461 marked the start of The Age of Pericles. This continued until 429 B.C. Pericles brought great changes to the government of Greece and also great changes to the nature of art and progress of his time.

The New Temple of Athens and The Parthenon were built along with many others. He had used building projects in a political way. His actions set the standard for not only Athens but Greece also. He believed that they should follow the path of no one but instead they should be a model to others. He also thought that they should be a guiding force to others and to follow through on their actions, deeds and excellence. People looked at Pericles as the guardian of his city and fought for the excellence of Athens in the future. He legacy still remains today for his democracy and his image of art, culture, politics and potential of Greece to succeed. Pericles had held true to the values of democracy and the belief that all people had a place and purpose within the start. That still holds true to the world today.

Martin Luther had the idea to stop corruption in the Catholic Church and expose them. Society was dominated by the Catholic Church, which means the church had excessive control over everything and everyone. The Renaissance was also taking place. The Renaissance was a time of a rebirth of culture. It had begun in northern Italy and spread throughout Europe. The Protestant Reformation had developed also. In the early 16th century, Martin Luther had discovered the churches selling of indulgences along with other things. In 1510, Luther traveled to Rome where he got a degree in theology and became a professor. In 1513 he began lecturing. At this time, this is where he found many things that would change his life and also the course of the church. He often found himself in conflict with the church doctrines. In 1517, Luther posted the Ninety-Five Theses. He had exposed the church for the sale of indulgences. Many people only knew and believed what the church told them. After refusing to recant, he set himself in great motion for ultimate excommunication. 1520 the Pope had sent a letter to Luther with a threat of excommunication and he then, publically burned the letter. A year later in 1521 Luther was excommunicated. He hid at the Warthburg Castle until 1522 then returned to Wittenberg and continued to teach till his death. Luther’s reform had spread into Switzerland and Holland. His teachings had opened the door to religious and civil freedom. After the widespread of his teachings to other countries, it led us to the more open society and more religious freedom that we have today. Both Martin Luther and Pericles had a great impact on the world in their time and in the society we have today. Without their determination to continue on a fight for what was not only what they believed in but what was right, the world might not have been as different today as it was. 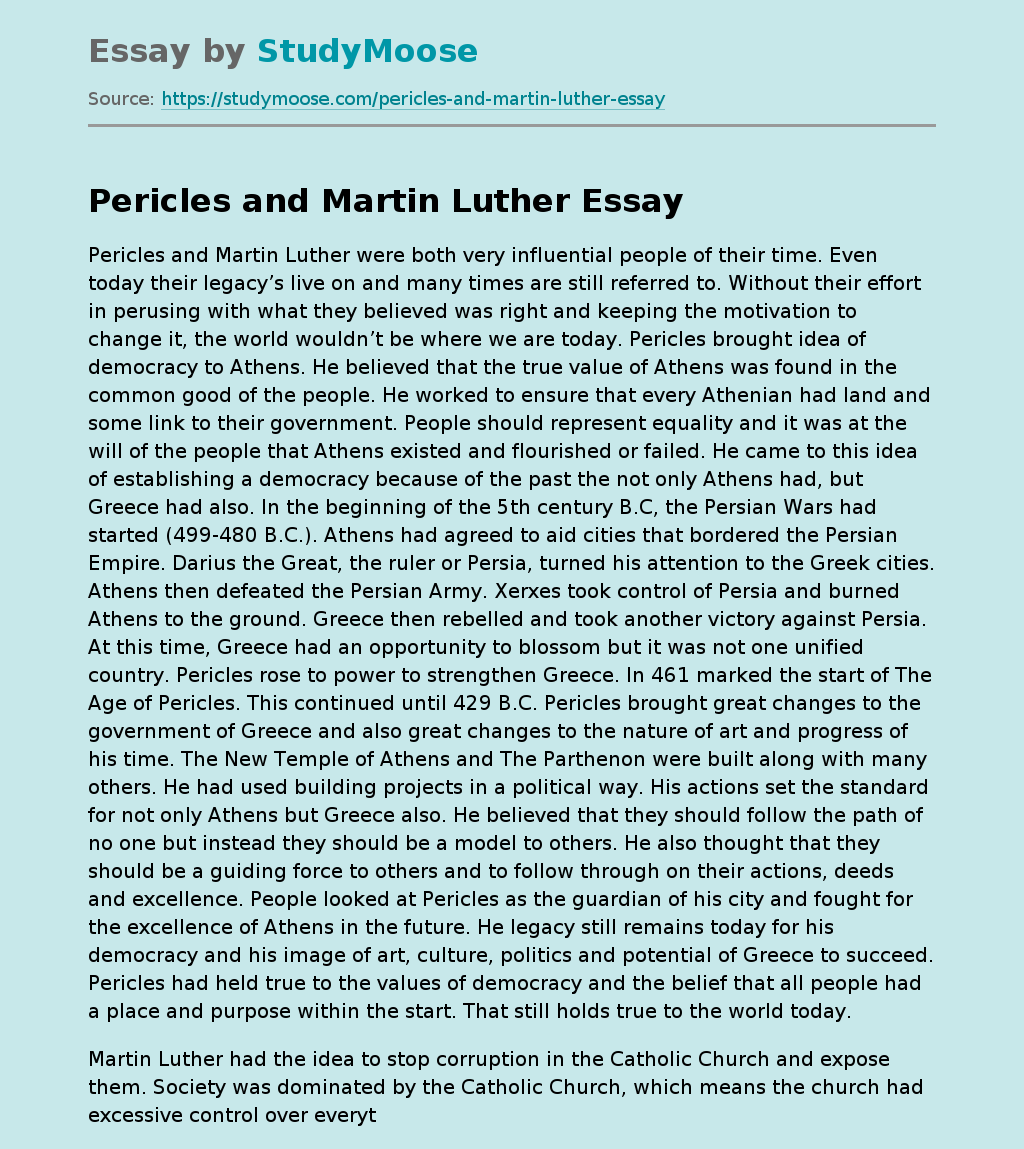