Different Genres Of Films And Their Impact On The Spectators

No other art form has had quite the impact on our lives that the motion pictures have. Everybody loves stories. We want to watch different movies, depending on the mood, temperament and circumstances. The most important thing is to choose the right genre. The term genre is used a lot around the movie industry to break down the type of film into categories. It’s difficult to place a lot of films in a single category. For this reason a lot of films have multiple genres.

Don't use plagiarized sources. Get your custom essay on
“ Different Genres Of Films And Their Impact On The Spectators ”
Get custom paper
NEW! smart matching with writer

They are classified by the description, theme, variety, or story idea that is determined by how the movie is written. There are a lot of genres. For example: comedy, drama, horror, western est.

A comedy is meant to make us laugh, by exaggerating the situation, the language, action, relationships and characters. A mystery may want us to think and try to solve a crime. Watching the film, you can cry or laugh or be scared.

Filmmakers know this, and depending on what they want to achieve they choose the genre to remove. On TV start to show war films, in anticipation of anniversary of the Great Patriotic War. There are a lot disaster movies on TV because of the rumors about the end of the world. All is accidental. TV is a big industry. Sometimes it is good sometimes it’s not but you have a choice whether you want to fall for this trick or not. If you want an adventure, then you should choose an Adventure films or Westerns.

They are usually exciting stories, with new experiences or exotic locales, very similar to or often paired with the action film genre. Westerns are the major defining genre of the American film industry .

They are one of the oldest, most enduring genres with very recognizable plots, elements, and characters (six-guns, horses, dusty towns and trails, cowboys, Indians, etc.). If you want something romantic, it would be better to select melodramas or dramas. They are serious, portraying realistic characters, settings, life situations, and stories involving intense character development and interaction. But if you’re nervous you needn’t to watch thrillers and horror movies, because Horror films are designed to frighten and to invoke our hidden worst fears, often in a terrifying, shocking finale, while captivating and entertaining us.

Epics include costume dramas, historical dramas, war films, medieval romps, or ‘period pictures’ that often cover a large expanse of time set against a vast, panoramic backdrop. Everyone has their favorite genre, favorite movie that is generally characterize a person. Movies influence on people. The more you watch good, thought-provoking and making to reason movies, the more you have positive emotions and develop as individuals. Similarly, choosing the opposite action movie or a horror film you faced likely with violence and fear. So take you choice.

Different Genres Of Films And Their Impact On The Spectators. (2017, May 11). Retrieved from http://studymoose.com/different-genres-of-films-and-their-impact-on-the-spectators-essay 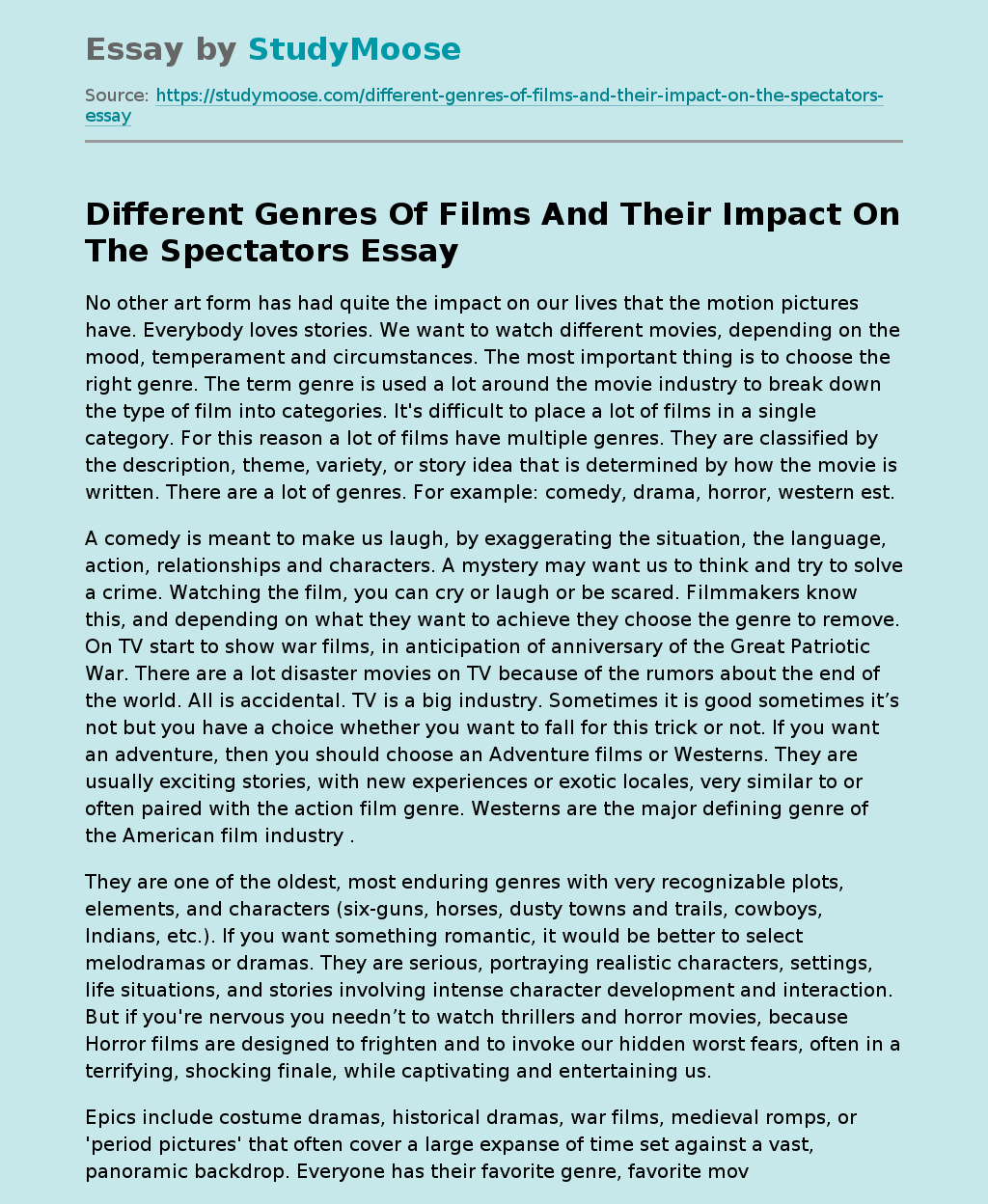