This famous speech was written by Thucydides, but given by Pericles sometime during Athens’ Pelponnesian War. This kind of speech was generally given at a mass funeral, to honor many who had died fighting in the war. Typically, funeral speeches at that time were very somber and mournful, but Pericles changed that. In this speech, he created this idea of national pride and faith in society, by using many hopeful and positive words.

Many of those at this funeral were probably in a state of mourning, wondering if it was even worth it to be fighting wars and causing many deaths and Pericles did a great job of shattering that question and restoring dignity back into Athenians for their great and loved nation.

Pericles was faced with a tough task, to speak at a large funeral of war victims, where the people are not going be in a positive state of mind at all.

His choice of words were perfect for crushing all feelings of despair and making people realize that the reason they were fighting was because they had something so great that was worth defending, their country. For example, one of Pericles first lines was “Our government does not copy our neighbors’, but it an example to them.”

This line is meant to invoke such a strong sense of national pride into the people, and it certainly does. If the people have pride in their nation, they will want to fight for it when it is under attack, and realize that fighting makes you stronger as a people.

He goes on to say things “Our military is in many respects superior to that of our adversaries.” This thought provides a sense of comfort for the people; since they know that there country is powerful enough to win. When you go into a fight knowing that you’re going to win, it makes the fight much more meaningful and positive.

This line also restores trust between the citizens and its military. If the people of Athens can trust their military, then they know that less war deaths will be the result, which will also make fighting all the more worth it. One of the most powerful lines comes when Pericles says, “We rely not upon management or trickery, but upon our own hearts and hands.” This makes the people of Athens realize that those fighting in wars are doing it because they want to be there and because they feel such a love for their nation in their hearts that keeps them fighting.

It is no accident that the Pericles’ Funeral Oration inspires many similar type speeches today. His speech puts meaning to what we are fighting wars for and helps to honor those who bravely died. Such a strong sense of camaraderie is created with this speech, which is a little more of what we could use today. The people of our nation need to be grateful that they are even a part of a country that’s so superior, that it’s worth dying for. 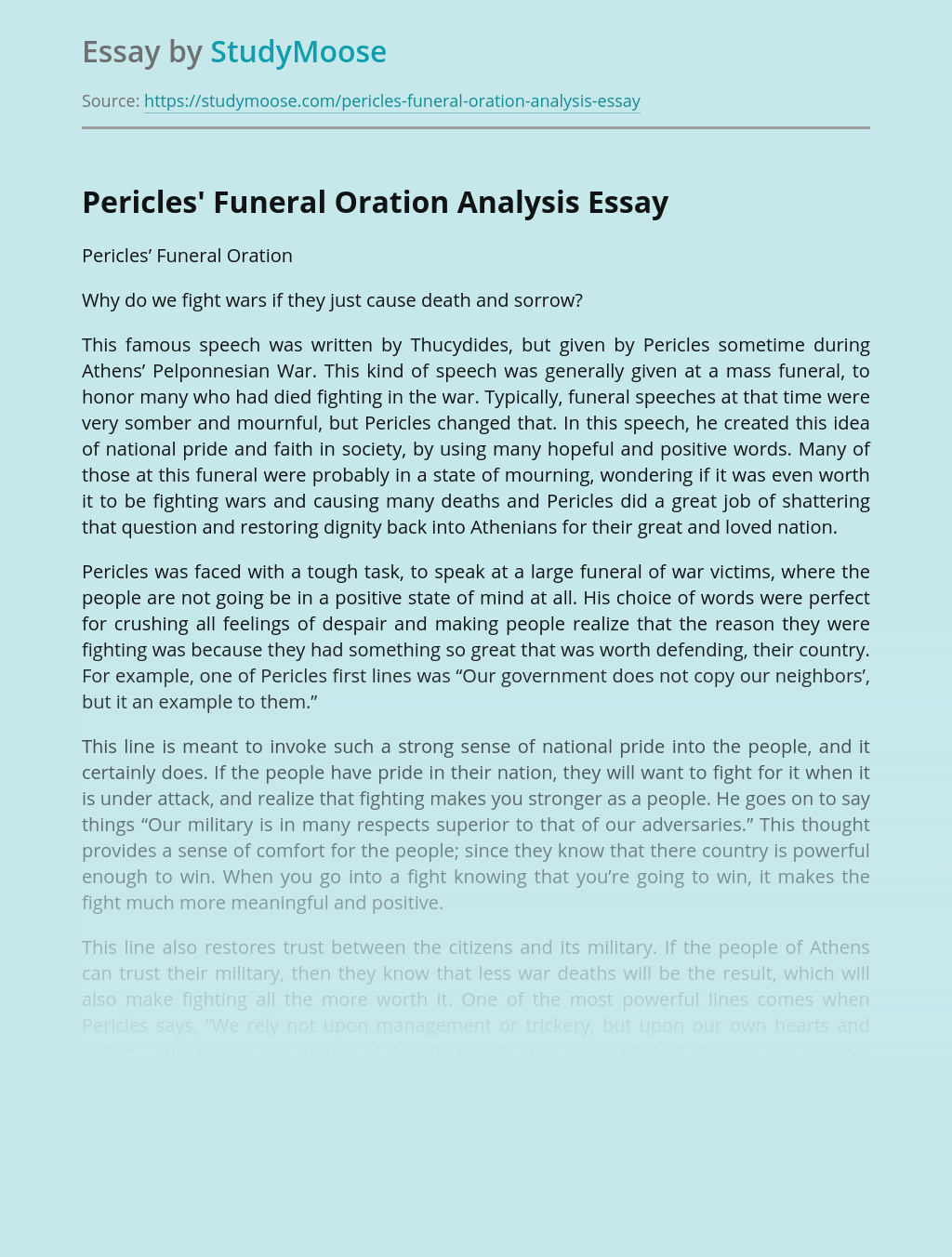