In the novel “Animal Farm” by George Orwell Old Major, the pig, gives a speech, in which he uses a variety of technics in order to convince the other animals that only rebellion will lead to their freedom. Old Major’s second paragraph is about facing the reality, showing the misery they live through and foretelling them their end how they will be slaughtered when they can not fulfil their duty anymore. By this truth Old Major catches the animals’ attention and stirs up their fury feelings towards humans.

Don't use plagiarized sources. Get your custom essay on
“ Analysis of Old Major Speech from Animal Farm ”
Get custom paper
NEW! smart matching with writer

Furthermore, he creates unity among the animals. Not only with his repeated address “comrades” but with pronouns such as “we, our and us”. The result is sympathy and respect, which Old Major gains. His tone seems very strict and factual due to the harsh words he intends to use, supported by the repetition of colons. Mostly effective are, however, the rhetorical devices found in his speech. At first he asks rhetorical questions, for example: “What is the nature of this life of ours?”.

By involving his audience he makes sure that he is followed in his ideas and lets the other animals get active in thinking. Moreover, the paragraph includes a triad consisting of “our lives are miserable, laborious, and short”.

This rhythm builds tension and sets the animals on even higher mutiny. By close inspection one will find the use of alliteration illustrated by “breath in our bodies”. Here again the smoothness and therefore the resulting rightness of Old Major’s words.

In addition, he makes use of figurative language. The metaphor “those of us who are capable of it are forced to work to the last atom of our strength” is an example for the strong imagery Old Major creates to assure the others of their wrong treatment by their farmer. The anaphora near the end of the paragraph starting two following sentences with “No animal in England…” brings out the importance of the repeated sentence structure, leading to the animals’ actual right of happiness and freedom. Finally, Old Major contrasts negative vocabulary including “misery, slavery and cruelty” with positive ones such as “happiness and freedom”. The huge different soundings of these words create hope upon all the animals and let them think that they deserve better. 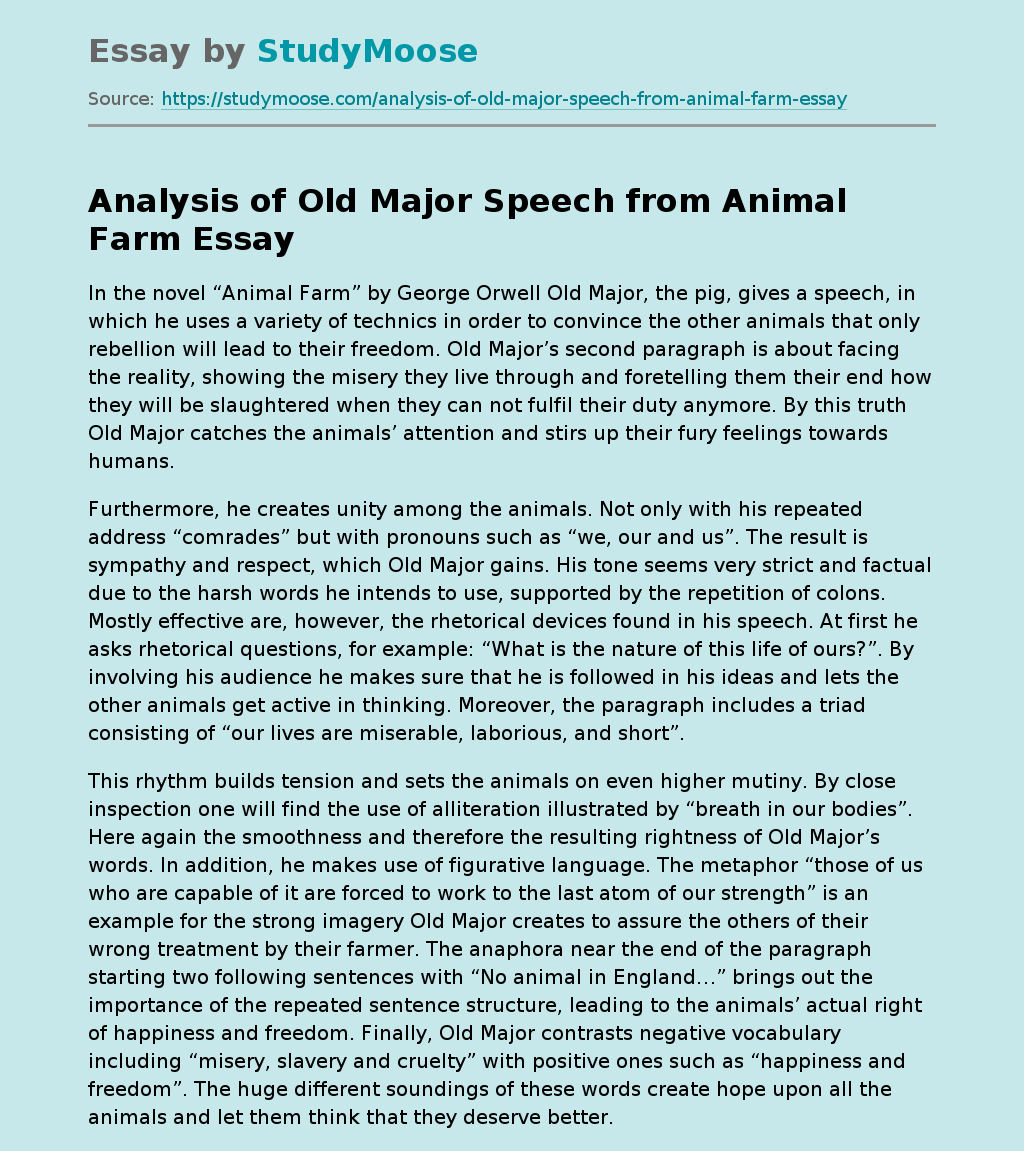