Having served the Indian Imperial Police in Burma, George Orwell received direct experience with the lower-class of society. After joining the Republican forces in the Spanish Civil War he grew critical of the communists, and later he fought the communists in Spain, himself.

This was the reason he wrote Animal Farm: to illustrate the dangers that communism, implemented in a harsh way, often led to. In this way, it could be classified as satire, i. e.on the corruption of the Russian revolution, not on communism itself.

Get a verified writer to help you with An Analysis of Old Major’s Speech: Animal Farm

He wrote it as an anthropomorphic allegory, that is to say that the story of the Russian Revolution was written with the characters being animals rather than humans, and that it was not telling the story literally, rather it was figurative. In my opinion, this was done to engage the reader more fully and to bypass any stereotypes the reader may have about any one of the real-life characters.

Out of these characters, Old Major of the Animal Farm represents Karl Marx who can be considered “the father of communist ideology” and of whom “Marxism” was named after.

In the same way, Old Major was the “father of animalism” and he was the first one to articulate its ideas. Old Major’s name could be described as an aptonym; both the name he was exhibited with i. e. Willingdon Beauty and the name the animals knew him by i. e. Old Major. The Author uses the stereotype of “old, experienced and wise, hence highly regarded and respected”.

His names represent these ideas: “Old” signifies age; “Major” signifies that he is respected due to his age; “Willingdon” may signify his leadership quality and “Beauty” signifies another reason he was highly regarded and respected. Due to his age, him being wise and his immense experience, both of which made him unique, the animals would naturally give him authority. He was a “prize middle white boar” i. e. unique in his appearance, but he was balanced with having “a wise and benevolent appearance”. This balance is the reason he engendered such respect that the animals would lose an hour of sleep to listen to his speech.

Although his elderliness is being emphasised by him being “12 years old”, the author goes on to say that “he was still a majestic looking pig, with a wise and benevolent appearance in spite of the fact that his tushes were never cut”. The fact that his tushes were never cut yet there was still a majestic look on him, indicates that he was unique and his appearance was true, not artificial. During Old Major’s speech, he was not only a person of honour, but he is placed in a position of honour.

He places himself on “a raised platform, under a lantern”, in a place of importance for the animals i.e. the barn, above the other animals, singling himself above the others and giving himself the authority he needed. In addition to this, he was there before any other animal, giving them the impression of promptness and strengthening their awareness of the graveness of the topic he was about to speak about. He took all these measures in order that he would have as much authority in the eyes of the other animals, as it would take so that it would make it impossible for the others to oppose him during the speech.

It was night time: the animals were exhausted from their work and this was intensified by the fact that they were missing sleep. The threats of Mr Jones had disappeared and it was the ideal time for the animals to reflect on the reasons for their misery. Old Major had chosen the best time. The fact that they were tired may have made it even more likely for them to submit to Old Major’s view on their lives and his solutions to their problems. It would be natural for them to accept his conclusions given the circumstances they were in and the authority he had.

Old Major waited till the animals were all present and silent. This also alludes to the importance of the topic he was going to talk about since it was his intention for all the animals to know about it and to give it their ultimate commitment. This was the importance of the occasion. One of the main components of his speech was the dream he claimed he had. In the eyes of the animals, Old Major, due to his high standing amongst them, was totally trustworthy and truthful.

Hence the fact that he claimed he had learnt a song that was sung by the ancient animals, and which had been long forgotten, a song which appealed to their innermost cores, linked him up with superior powers in the eyes of the animals. In this manner, the dream led the animals to putting all their trust in Old Major’s ideas, since he was, in their eyes, impossible to be contradicted. With this in mind, the animals naturally fell “into the wildest excitement” upon Old Major’s recitation of the song.

It threw hope into their hearts for change, made them wishful of the future and inspired them to work for the rebellion. It was also Old Major’s experience which made his dream impossible to contradict: he was unique amongst them due to his vast experience, something which no other animal on the farm could compete with, and it was based on this that he made his predictions of the future.

A feature of the speech, which was arguably one of the most effective in terms of persuasion of the animals, was Old Major’s use of inclusive language i. e. language which included and united the audience i. e. the animals. He uses this technique throughout the speech, but the effect is emphasised in the 5th and 6th paragraphs. In the 5th paragraph, after mentioning the enemy, man, he justifies his conclusion about them citing the fact that man is incapable of doing the work animals do. Old Major declares about man, “he does not give milk, he does not lay eggs, he is too weak to pull the plough, he cannot run fast enough to catch the rabbits”.

By mentioning this, he is not only illustrating the superiority of animal over man, but he is also engaging the animals in making them proud of what they do as opposed to men. Old Major does not confine himself to speaking (generally), rather he chooses to speak directly to each animal, capturing their fullest engagement with rhetorical questions on subjects of utmost concern for them. He emphasises the corruption of man with regards to these matters. This ultimately leads to the animals anger and outrage at the humans, further uniting them against man. He says, “You cows…

how many thousands of gallon of milk have you given during the last year? And what has happened to that milk which should have been breeding up sturdy calves? Every drop of it has gone down the throats of our enemies”. He repeats this with regards to the hens, ” And you hens, how many eggs have you laid this year, and how many of those eggs ever hatched into chickens? “. He even singles out Clover reminding her of the fate of her foals who were all sold. He emphasises his uniqueness in that he was allowed to reach his age, he uses himself as the ideal model and describes his life as “the natural life of a pig”.

He highlights the fate of the porkers, saying “you will scream your lives at the block within a year”. He mentions Boxer, who was described earlier on in the text as “as strong as any two ordinary horses put together”, and describes his ultimate fate to be with the knackers who will kill him for the fox-hounds. As I have illustrated, Old Major combines inclusive language, rhetorical questions on issues of utmost concern for the audience, such as the horrors Mr Jones had prepared for their death.

Get a verified writer to help you with An Analysis of Old Major’s Speech: Animal Farm 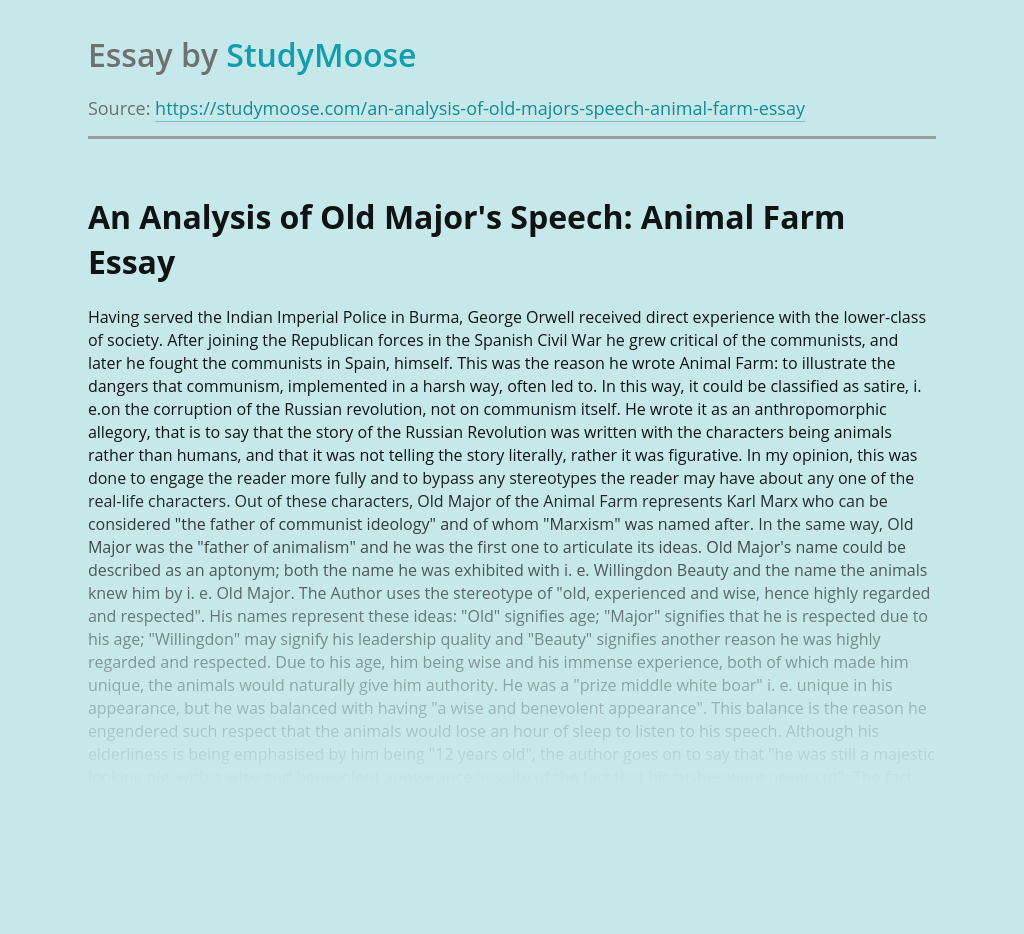 Both Shakespeare and Orwell present rivals as threats to their leaders’ power. Shakespeare introduces this threat through the Witches in Act 1, scene 3 when the third witch announces that Banquo ‘shall get kings’. In Macbeth’s soliloquy in Act 3, scene 2, the audience is reminded that he is predisposed with maintaining his power, now...

Throughout the play squealer is responsible for bringing about changes on animal farm after jones is expelled. In this essay I’m going to explain why. In the extract, squealer is trying to convince the animals that the pigs are doing everything for the animals and for the farm. The pigs are taking all the privileges...

Get Essay
The Allegorical Character of the Novel Animal Farm

Good and Evil in Lord of the Flies and Animal Farm

Good and evil themes, in some form, exist in practically every piece of literature ever written. It is found in literature as old as the Bible to newer stories such as The Hunger Games. It is no surprise to find this same theme in Lord of the Flies by William Golding and Animal Farm by...

Once upon a time there was a farm called Manor Farm which was run by farmer Mr. Jones. There was many different animals including pigs, horses, dogs and chickens. One day all the animals gathered in the barn for a meeting that Old Major had organised. He told them a dream he had which was...

Snowball is a young, smart, good speaker, who is also idealistic. Leon Trotsky is the other leader of the “October Revolution. ” Snowball really wanted to make life better for all while Leon Trotsky was a pure communist and followed Marx. Napoleon was not a good speaker or as clever as Snowball. Joseph Stalin was...

Animal Farm was written to be focused on the story of rebelling animals. However, it both constructs and reinforces many themes. The novel ‘Animal Farm’ is centralised among the story of the animals that live on Manor Farm, where their cruel master Mr. Jones dictates them. Under the inspiration of a pig named Old Major,...

In George Orwell’s Animal Farm which is on the subject of the existence of a society of animals living on the Manor Farm. Don't waste time. Get a verified writer to help you with An Analysis of Old Major’s Speech: Animal Farm HIRE verified writer $35.80 for a 2-page paper One first thinks that this...