Nearly every character and event in Charles Johnson’s short story Menagerie, a Child’s Fable can and should be interpreted to signify the social and political ways in which American lives operated in the 1980’s. Much like George Orwell’s Animal Farm, the allegorical fable uses animal characters to convey very human themes, especially those pertaining to religion and politics. Johnson’s application of a captivating literary style to a simple history lesson brings to life ordinarily dull themes like fascism, social darwinism, faith, and societal norms by way of one of the most absorbing of symbolic literary forms: the allegory.

Perhaps some of the most interesting themes Johnson explores are those which do not pertain solely towards human interaction, and can just as easily apply to actual non personified animals. Among these are social darwinism and auto-segregation. When considered in accordance with Monkey, the African American trickster character, these particular themes become even more intriguing. Social darwinism is brought into play when the animals first begin to realize that they are indeed left to fend for themselves.

Rather than working with those in charge to create some sort of order, they do as they please and anarchy ensues. The strong are granted free reign to prey on the weak. Monkey steals food from the fish (Reed 305), Siamese brutally rapes Rabbit (Reed 306). And frankly, had the entire pet shop not burned to the ground, it seems inevitable that this vicious cycle would have continued indefinitely.

It is only after this initial chaos that the animals begin clumping together for survival.

Johnson says, “Old blood feuds between beasts erupted…” (Reed 306). Once mammals were pit against reptiles, males against females, it became impossible to truly coalesce. The allegorical implications of the animals’ inability to live peacefully with one another is quite clearly racial. In one case, when Berkeley talks Monkey out of eating all of the fish food, Monkey spits back at him, “You’re a mammal too. It’s unnatural to take sides against your own kind” (Reed 305). Talk like this from a society’s most influential figure is extremely reflective of a world in which white and black Americans create relationships based primarily on skin color.

To make matters more interesting, it appears as if Monkey is the only one of his own kind’ in the pet shop, yet he was especially concerned with the theme of betrayal against others of the same species. In his essay The Trickster as Selfish-Buffoon and Culture Hero, Michael P. Carroll suggests that behavior such as this might be because “…the trickster is usually associated with an animal characterized by solitary habits” (Carroll 116). Being that Monkey was the only primate in the menagerie, Johnson might have been emphasizing the lone, secretive nature of the trickster character. Early on, Monkey brings up democratic values in an attempt to persuade Berkeley to unleash the animals. In his argument, Monkey declares, “Dog, I’m asking you to be democratic! Keeping us locked up is fascist!” (Reed 304). In an interview with renowned African American poet Eugene Ethelbert Miller, Johnson explains that it was Monkey’s belief (or at least his argument) that release from their confines was a civil liberty that Berkeley was withholding from the animals. Later in the story it appears that this insistence upon release did less in the way of societal gain and more in the way of Monkey’s personal gain, accelerating his agenda further (Reed 304).

The negative connotations associated with fascism are used to fuel an ad hominem attack on Berkeley. By accusing him of such a distasteful thing, Monkey causes Berkeley to completely reevaluate his approach to maintaining control over the situation. Simply put, he’s worried what the other animals will think of him after being branded with such an adverse title as a fascist. That being said, his only option becomes releasing the animals to save his own hide (Reed 304).

On many occasions such as this, the negative connotations that words and ideas carry for the characters in the story reflect the beliefs held by the society that the story was written into. Insulting Berkeley by throwing him into the same playing field as Mussolini and Hitler highlights how much of an unfavorable foundation Americans had to base their ideas of fascism off of. The same can be said of other themes, particularly those religiously and culturally affiliated (Young 491). By taunting another character for being affiliated with a particular theme, or perverting some sort of sacred or culturally significant belief, the trickster emphasizes the sheer extent of that significance to the culture that the story was written for (Hynes 37).

As pertinent as they may be, political themes are not the only parallels that Menagerie shares with real life. Forlorn religious themes run rampant as well, particularly the concept of a dead god. After Mr. Tilford’s absence was generally accepted, the animals were faced with the ‘death’ of he whom they had learned to rely on for their every last need. Berkeley, being the most pious of all the animals towards Mr. Tilford (likely due to all of the freedoms he was granted as guard dog), adamantly refused to believe in the reality of Tilford’s death. Though the old man was unlikely to lift a finger for Berkeley’s sake, the guard dog remained incessantly faithful to a point of denying his ‘god’s death (Johnson).

Monkey also played a big role in symbolically embodying vast religious themes. In his interview with Miller, Johnson references the adage ‘God’s ape’ in relation to Monkey’s character. This saying could also account largely for Johnson’s choice of a primate to play the role of trickster (Johnson). Another defining characteristic of the trickster trope is that of their bloodline. They are neither fully god or human. They serve heaven as a messenger between the two worlds and they serve earth as an “Imitator of the Gods” (Hynes 39). After Mr. Tilford’s death, Monkey attempted to step up. It was his goal to mimic or ‘ape’ the godlike figure which once reigned over the pet store. As the story makes quite clear, however, Monkey’s attempts fail and ultimately result in the unnecessary demise of most of the story’s characters.

By far the most religiously salient character was the most humble of all, Tortoise. A year prior to the events which transpired in Menagerie, Tortoise successfully escaped the pet shop, only to mysteriously return of his own accord. He never spoke after that and spent a significant amount of time in his shell. Charles Johnson explains in his interview that Tortoise returned from his trip far more enlightened than he had left. He returned a Taoist, choosing to spend the majority of his time huddled within his shell which physically embodied the protective barrier many gain from religion. When Berkeley comes to the realization that Tortoise’s shell will be the reason for his survival, he is also speaking of that meditation which prevented Tortoise’s spirit from being tainted by the catastrophe like all the rest (Johnson).

The African American trickster has for years been used as a tool for rebellion; an intellectual resistance in a physical fight. An expository character whose very existence centers on unveiling information and fighting with it. Regardless of whether the trickster is in the right or the wrong, they can be expected to reveal some sort of corruption and use it to their advantage. Monkey addresses the issue of the animals being detained in oppressive cages and uses it to sweet talk his way towards freedom. In this way, Monkey also embodies a strong air of resistance undoubtedly felt by all oppressed populations in the 1980’s, and indeed today.

Overall, Johnson’s short story paints a thorough allegorical image of the 1980’s as seen by an oppressed American. Through a creative lense, he highlights social, political, and religious themes relevant to his day. Among these are social darwinism, auto-segregation, fascism, and faith. His images of monkeys, turtles, and dogs spectacularly animates pertinent social and political concepts, and demonstrate mankind’s overwhelming likeness to beasts. 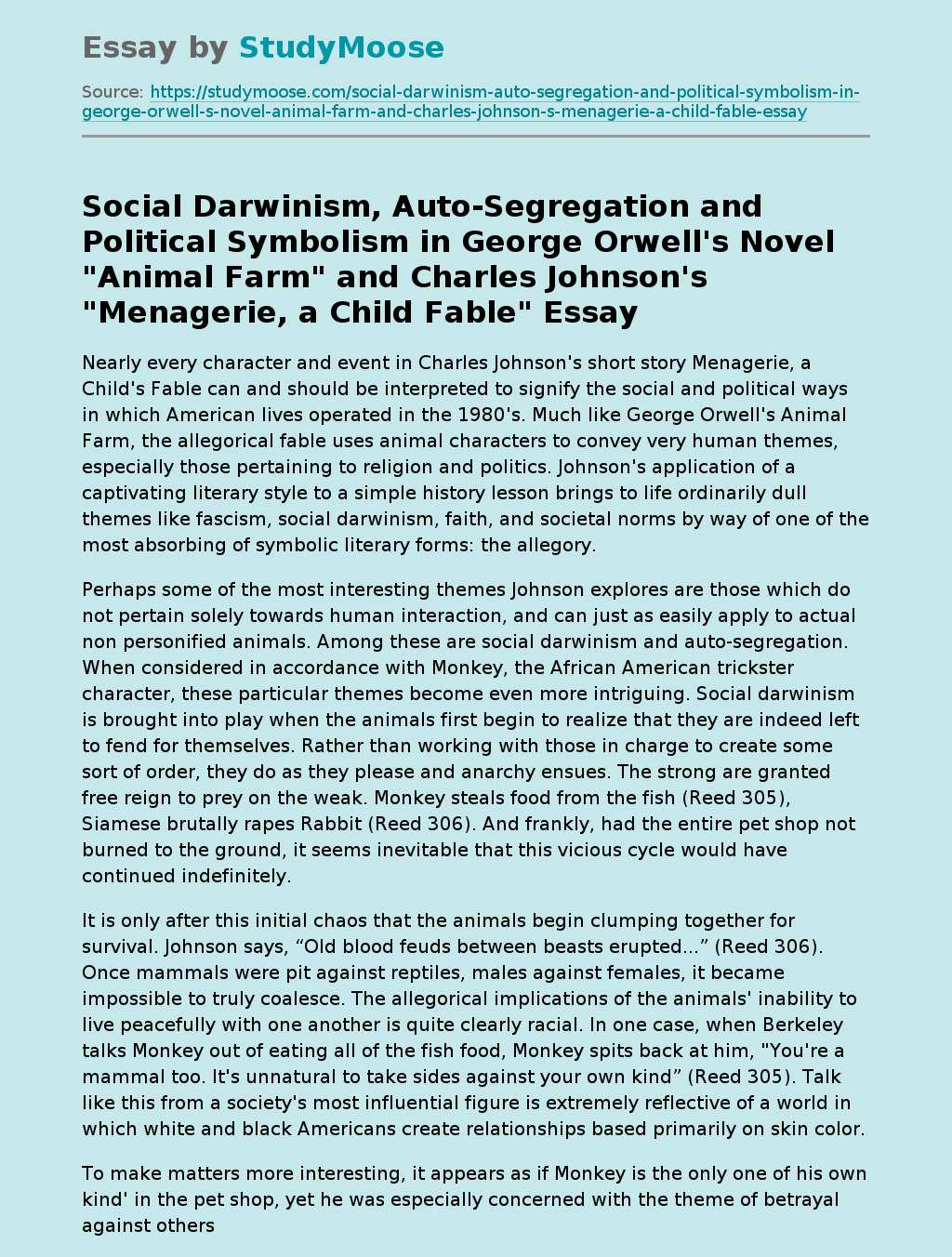