Tennessee Williams is one of the most influential writers of the twentieth century. His first successful play, The Glass Menagerie, embodies his grace and skill as an author and an interpretor of the human experience. This intense drama ventures into familial relationships, societal situations, and the nature of memory. The Glass Menagerie opened in the mid 1940s in Chicago, and instantly became a mainstay in modern short fiction and continues to influence playwrights and authors of all genres.

It is through symbolism that Williams reinforces theme, character development, and fate in The Glass Menagerie.

Don't use plagiarized sources. Get your custom essay on
“ Symbolism in Tennessee Williams’ The Glass Menagerie ”
Get custom paper
NEW! smart matching with writer

One of the first symbols encountered by the reader is the fire escape. The fire escape represents both a literal and symbolic way to leave the house. It also represents a major them in the story – the need to escape. Williams describes the Wingfield house and makes note of the fire escape. He explains “huge buildings are always burning with the slow and implacable fires of human desperation” (scene i).

Certainly this is true of the Wingfield family. Tom wishes to escape from his boring job and current lifestyle because “Man is by instinct a lover, a hunter, a fighter, and none of those instincts are given much play at the warehouse! ” (scene ii). He does succeed, occasionally, in finding comfort in movies, drinking, and magic shows. The fire escape represents his ultimate path to his freedom. His regular trips onto the fire escape to smoke foreshadows the permanent abandonment of his family.

In the final speech of the story, Tom states “I descended the steps of this fire escape for a last time and followed, from then on, in my father’s footsteps, attempting to find in motion what was lost in space” (scene vii).

Laura wishes to escape too. However, she seeks refuge not in the real world but within the house and a reality all her own. The fire escape protects her from the outside world. She wishes to isolate herself from the world where her deformity is laughed at and her shy spirit is crushed.

Even when she ventures out on to the fire escape she slips representing another failed attempt at entering the real world (scene iv). The high school nick name, “blue roses” (scene ii), that Jim had for Laura is also symbolic. It is a symbol of the affection that Laura seeks and the cruelty that world offers her. Blue roses are both unusual and mysterious which reflects Laura’s personality. The nick name while seemingly affectionate was actually a play on the term “pleurosis” which Laura suffered from in her childhood.

Additional, the use of the name Rose pays homage to Williams’ sister who was afflicted by a mental disorder and was against her will subjected to a lobotomy which she never recovered from. The Glass Menagerie” is not only the title but also the central symbol within the story. Laura’s collection of glass animal figures mirrors several of her personality traits. Her mother references the glass menagerie when talking about Laura and comments “She lives in a world of her own—a world of—little glass ornaments” (scene v). Laura is delicate and needs to be handled carefully because “Glass breaks so easily.

No matter how careful you are” (scene vii). Just as glass is transparent and superficially uninteresting so is Laura. However, in the right light those tiny glass creatures refract light in a number of various and vibrant colors. This is similar to Laura who may appear shy and boring to strangers but becomes alluring and attractive when her false societal mask is peeled away and her inner spirit is exposed. Jim is almost instantly enamored with Laura and tries to comfort her by stating “You think of yourself as having the only problems, as being the only one who is disappointed.

But just look around you and you will see lots of people as disappointed as you are” (scene vii). The menagerie also represents the imagined world Laura lives in – full of color but based on unstable illusions. The most important and functional symbol within the short story is the glass unicorn. The unicorn is Laura’s favorite figurine. Jim states “A unicorn, huh? —aren’t they extinct in the modern world? ” (scene vii). Laura, like the unicorn, is ill equipped to exist in this world full cruel acts and evil people.

The fate of the unicorn, extinction, foreshadows what will Laura’s future will hold. It also becomes a symbol of the initiation and normalization of Laura into the real world. As Jim and Laura dance the unicorn is broken. Jim’s kiss destroys Laura’s uniqueness. She fades effortlessly from her heightened experience with Jim into a normal existence as he explains he must rush off for an appointment with his girlfriend. She gives the broken unicorn to Jim as a keepsake because the unicorn “is just like all the other horses”(scene vii) now.

This is symbolic of everything that Jim destroyed and took from Laura in that single evening. Symbolism is a literary device that Williams employs in almost all of his writing. Using common place items – the fire escape, glass figurines, roses – allows the theme, character development, and the denouement of the story to be easily accessible and understood by the audience. The glass menagerie is physical image and memory that all readers can take away from the story. Symbolic of a life lived in fantasy because it could not survive in the world’s cruel reality. 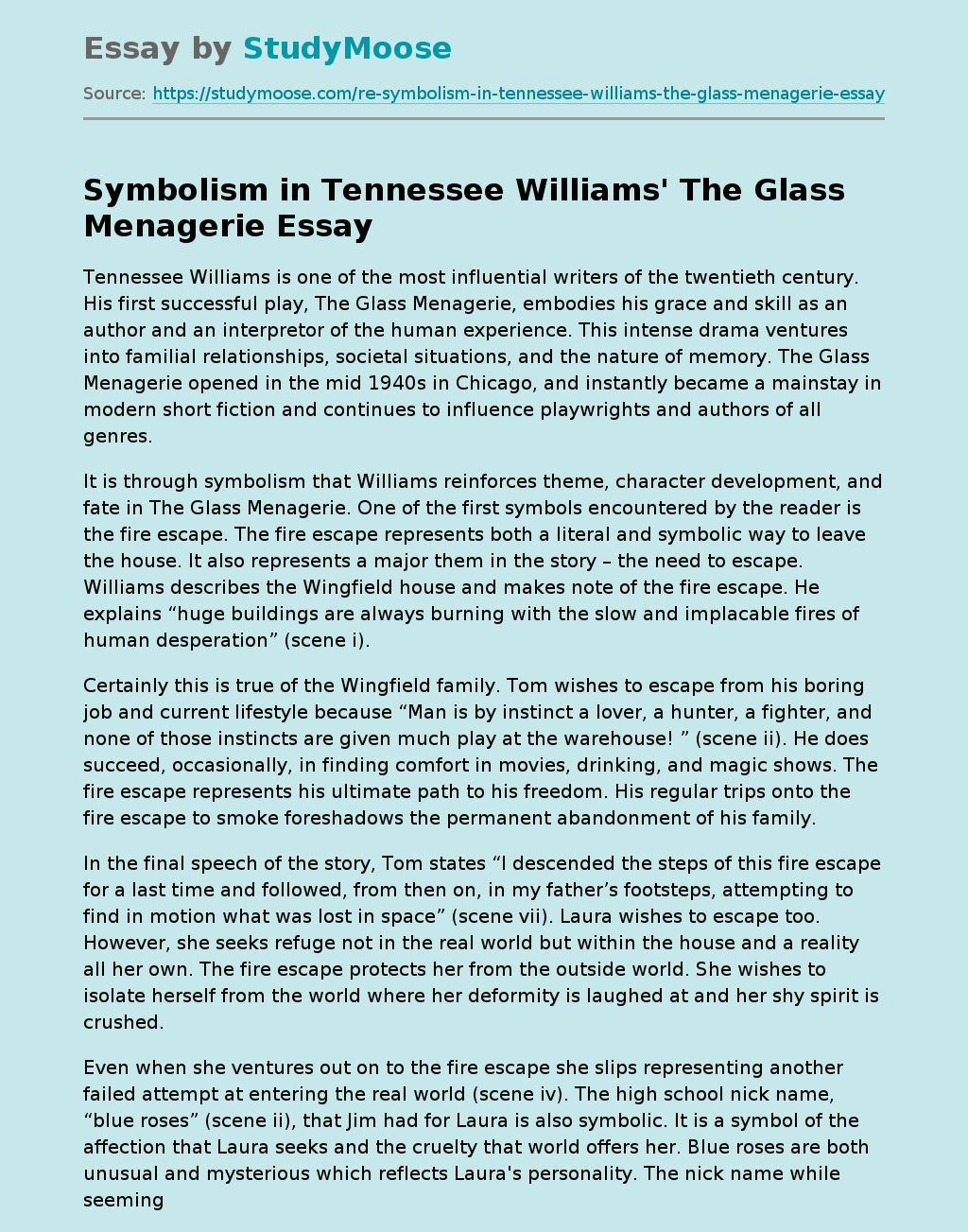