Tennessee Williams explores the theme of entrapment and flight through symbolism and motifs that depict a want for escape, relationships that portray entrapment of each other and conventions of a play, such as scenery, stage directions, narrative and dialogue that heighten these ideas as a whole. The opening scene sketches out the scenery and initial symbol of entrapment for all the characters – the flat which is ‘always burning with the slow implacable fires of human depression’.

As Williams describes, the flat is a symbol of depression, formulated by the era the play was set in, the 1930s – just after the Wall St.

Turn in your highest-quality paper
Get a qualified writer to help you with
“ How Does Williams Explore the Theme of Entrapment in the Glass Menagerie ”
Get high-quality paper
NEW! AI matching with writer

Crash, in which America suffered great economic depression. The words “burning” and ‘fires’ link into the main symbol that literally attaches itself to the flat: the fire escape. Williams describes it as ‘accidental poetic truth’, telling us that this is not only an escape from tangible fire, but also an escape from the ‘fires of human depression’ – not only the economic depression of society, but in many ways the depression of the Wingfield family themselves.

As it is the only entrance into the Wingfield apartment, it is in essence, their only escape. Williams explores this symbol further through his character Tom, who frequently goes out to smoke on the fire escape in an attempt to escape the reality of his home. For example, in Scene 5, Tom goes outside to smoke and talks to the audience about how the “world was waiting for bombardments” – showing Tom’s desire for adventure – foreshadowing his flight in Scene 7.

Opposite to this, showing the difference in character, Laura trips up on the fire escape in Scene 4. This shows how Laura is unable to truly escape the flat and, in many ways, does not seek flight, but is more, hurt when attempting to seek flight. This links into the symbolism of the broken glass unicorn in Scene 7, in which Jim attempts to free Laura from her shyness and peculiarity; however, in the end, Jim shatters Laura emotionally, breaking off the horn of the unicorn.

Relating back to the era of depression and the idea of ‘escapism’, Tom, as Williams’ protagonist, explores the concept of escape in various forms, such as books, the cinema and his own poetry. For example, in Scene 3, Amanda takes away Tom’s book by D. H. Lawrence, who was a contemporary writer of the time, that allowed Tom to escape into his stories. When Amanda took this away, it led to an argument between the two, emphasising the importance of escapism to Tom and how, without it, he could not entirely cope with the reality of his situation.

The idea of escaping to the cinema links into the want for adventure, this is also highlighted in Scene 3, when Tom talks of going to ‘opium dens’ and joining the ‘Hogan Gang’ whilst ‘leading a double-life’ and occasionally being called ‘El Diablo’ – all of these ideas are inspired by films and through sarcastically describing how he is all these, outlines the fact he feels his lifestyle is dull and without adventure – against, showing Tom seeking flight. However, Tom wanting to seek flight conflicts with his awareness that he will disrupt Amanda and Laura’s life by abandoning them.

This is evident in scene, through Williams’ use of the ‘magic coffin trick’ as a symbol of how Tom wishes to be. Whilst the magician is able to escape from the coffin without removing the nails, Tom is aware of how he is unable to escape from his family without disrupting Laura or Amanda’s lives. Here, the coffin in symbolic of Tom’s family and the warehouse – how he finds it to entrap him as though he were in a coffin, giving negative connotations of being suppressed and without choice. In many ways, however, this scene also explores how Tom is trapped emotionally by his care for his family, particularly Laura.

Tom confides in her his feelings and thoughts of wanting to escape like the magician, showing a degree of closeness and trust; whilst, in general, it is his care for his family, the fact that he will disrupt the nails of the coffin, that prevents him from immediately taking flight. In terms of Laura herself, the glass menagerie in the central symbol to the play and represents, not only the different aspects of Laura, that is delicate and fragile, but also how Laura is trapped within a cabinet – within the fantasy world of glass figures.

This links into the phrase ‘left on the shelf’, the idea that Laura, being part of the glass collections, has been left away from leading the normal life of romance which she fantasises about with Jim, showing how she has trapped herself on the shelf by being out of touch with reality, trapped within the cabinet. Linking on from the glass figures being symbolic of Laura, the delicacy could be seen as symbolic of her disability, something Laura also believes traps her from being ‘normal’.

However, this links onto the next aspect of exploring relationships, and in many ways Amanda is responsible for Laura’s belief that her disability entraps her. In Scene 2, Amanda’s entrapment of Laura becomes evident in three different lights, Laura’s fear of disappointing Amanda, Amanda’s overbearingness as a parent and the idea planted in Laura’s head by Amanda that her disability my hinder her in life. This becomes more apparent when Laura states to her mothers ‘I couldn’t face it’, referring to the fact the disappointment that would received if Laura had told Amanda that she ad quite the typewriting course.

This shows how Laura feels there is a strong expectation from Amanda that she has to fulfill and this prevents her from performing her best. This expectation from Amanda links into her being overbearing rather than empathetic with Laura. The clear example in Scene 2 is that Amanda tried to send Laura to the typewriting course, and when that failed, pushed even further for Laura to find a husband. This lack of empathy is demonstrated when Amanda refers to Laura throwing up at the typewriting course as ‘nervous indigestion’.

Referring to throwing up due to nerves as ‘indigestion’ underplays how Laura would have felt, suggesting it to be ridiculous. This also shows how Amanda’s lack of empathy would lead to her disappointment in Laura that Laura ‘couldn’t face’, showing how Amanda traps Laura through expectation. This idea that Laura is too embarrassed to even tell her mother is emphasised when the legend ‘The Crust of Humility’ appears on the screen – adding a dramatic effect showing Laura’s humility she feels in confessing to her mother that she threw up.

The last idea relates to Laura having a cripple and how Laura feels this might hinder here in finding a husband – ‘Laura [in a tone of frightened apology]: I’m – crippled! ’. The ‘frightened apology’ suggests that being ‘crippled’ is something Laura is ashamed of and damages her, not just in the physical sense of being crippled, but in the emotional sense. Being emotionally crippled links back to throwing up at the typewriting course due to nerves;

Laura is under the impression that her cripple leads her to be at a disadvantage and not ‘normal’, evoking a shyness in groups and ‘nervous indigestion’ – showing how Laura is, in many ways, trapped by her own ‘disability’ in more than one sense. However, this idea that Laura is crippled is overplayed by Amanda, who ironically highlights Laura’s cripple whilst trying to desperately avoid it, ‘you’re not crippled (… ) hardly noticeable, even! ’. Through turning this into an exclamatory phrase does the opposite of what Amanda is trying to achieve; by pointing out Laura does have a cripple she highlights the fact it exists.

For Laura, this would highlight the fact that she crippled and furthermore, add to her shyness which prevents her from truly taking flight. Overall, despite Laura partly trapping herself by her own emotional disabilities, it is Amanda that enhances this and, in essence, traps Laura. Amanda being overbearing plays out in scene 3, when Tom confronts her with the frustration he has felt from Amanda’s lack of empathy for him that leads to her overbearingness. For example, Amanda refuses to let Tom go to the movies: ‘You’re going to listen! No more insolence from you!

I’m at the end of my patience! ’ showing how not only Amanda tries to restrain Tom, but also talks down to him like a child, with the use of constant exclamatory phrases that give the impression of shouting. Tom wanting to go to the cinema, as previously stated, is a symbol of his escapism, therefore, Amanda wanting him to stay is her attempt to entrap him – talking to him like a child shows the want and need to control him from seeking flight. This could be due to the fact Amanda sees Mr. Wingfield in Tom and suspects that Tom will soon take his own flight as well.

Amanda further traps top by placing upon him the burden of the family, ‘Jeopardize the security of us all? ’, which is what Tom was possibly trying to escape from in the first place. Although being the ‘man of the family’ creates a natural role of responsibility that in many ways traps Tom from leaving, Amanda emphasises this more by telling Tom that he will end their security if he leaves. By highlighting this point, although it is intended to keep Tom at home, in many ways, may push him further away as it increases the burden placed on him to look after the family.

Furthermore, by stopping Tom from going to the cinemas, Amanda is denying Tom of escapism in movies and this could be what also led to his eventual flight, along with the want to escape the dwelling of the Wingfields all together. Overall, Tennessee Williams explores the idea of flight and entrapment through not only symbols, but the relationships between each character, showing how they are entrapped, not only by society, but by each other and themselves.

How Does Williams Explore the Theme of Entrapment in the Glass Menagerie. (2017, Jan 24). Retrieved from https://studymoose.com/how-does-williams-explore-the-theme-of-entrapment-in-the-glass-menagerie-essay 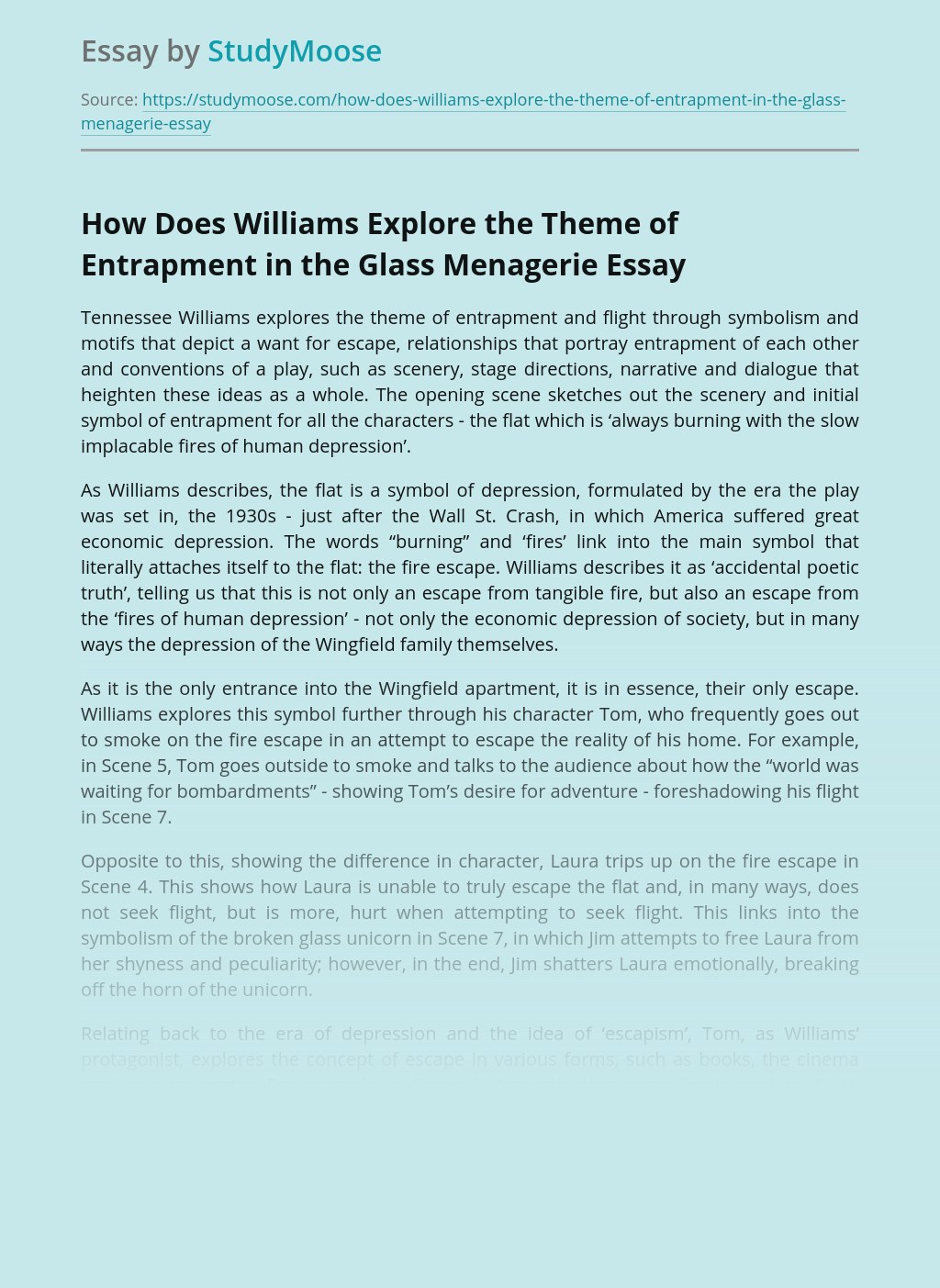 Turn in your highest-quality paper
Get a qualified writer to help you with
“ How Does Williams Explore the Theme of Entrapment in the Glass Menagerie ”
Get high-quality paper
Helping students since 2015
Stay Safe, Stay Original