By cchungl 17 Tennessee Williams achieves dramatic tension in the play through the interactions between characters, symbolism of characters. effective use of music and sound effects, words and setting. He does not use Acts, but divides the play into eleven scenes, as with all other scenes, Scene 10 naturally leads to a dramatic climax.

He creates dramatic tension in “A Streetcar Named Desire” through the antagonism between Blanche and Stanley.

Blanche’s dislike and condescending opinion towards Stanley are shown through the overheard conversation she had with Stella in Scene 4. when she unreservedly degrades Stanley by drawing parallels between him and a “survivor of the Stone Age”, she further says, “there’s even something- sub-human” and “ape-like about him”. Immediate antagonism Is created as Blanche dehumanises him and despises him for his “bestial behaviour”.

Stanley sees Blanche as a threat to his normal lifestyle, and resents her Interruption, Infringing upon their privacy, as shown in Scene 8 when Stanley says, “You remember… Them nights we had together? ___when we can make noise In the night that way we used to.

_. with nobody’s sister behind the curtain to hear us”. Stanley feels threatened by Blanche’s attack on his authority and wants to remove her disruptive presence. Tension Is created when they are jostling for power and influence in their battle for Stella’s heart.

As an audience, we are aware of Stanley’s violent, forceful nature as he hits his pregnant wife In Scene 3 under the influence of alcohol, and Blanche’s constant threat of violence from Stanley puts her emotions on edge, heightening the tension s she reacts with a contrasting manner, which furthers infuriate Stanley.

For example when Stanley screams “(booming) Now let’s cut the rebopl” this dramatic outcry and instantaneous release of tension that shocks the audience, but Blanche reacted differently In a playful manner, by squealing “(pressing hands to her ears) Ouuuuu! Moreover, the music and sound effects play a significant role as a mood setter and a source of characterization. In scene 10, a light-hearted “honky-tonk music Is heard”, this gives a false sense of security to the audience that nothing extreme will happen. However, it disproves audience’s assumption and shows the overt contrast In mood in the beginning and end of scene 10. The “blue piano expresses the spirit of life which goes on” in “New Orleans”, hence is usually invoked in scenes with passion.

It is most 1 OF3 and Stella have their active, passionate relationship. Also in Scene 10, before Stanley rapes Blanche, his passion is amplified as the “blue piano begins to drum up louder”. Although interrupted by “the roar of an approaching locomotive” which symbolises Blanche’s fear to face the reality and the breaking of the norm, the “blue piano’ resumes. It signifies the continuation of Stanley overpowering her fear. When it is played louder with a faster tempo, the aural effect escalates the tension and creates a tenser atmosphere for the audience.

The theatrical climax is delivered with “the hot trumpet and drums” which “sound loudly’. The “hot trumpet” represents Stanleys triumph over Blanche, as trumpets are usually played when victory is won. The drums denote the pounding heartbeat of Blanche, as she fears the intrusion of Stanley. However, the sound produced by both instruments is loud, violent and intrusive, along with the drastic change from blue piano to this disruptive din, the ising noise of “inhuman Jungle voices” and the penetrating noises as Blanche “smashes a bottle”, tension is intensified.

These sound effects do not Just create ambience but they also seem to fill the Kowalski’s apartment with tumult, making it more cramped thus adding to the climax. These noises are not comforting as they keep Blanche from finding a moment to relax, making her feel uneasy. Tension builds, as she is unable to control her emotions. With the claustrophobic setting, tension is ratcheted as the confining space with the hot steam from the baths heats up the tiny apartment. Blanche avoids Stanleys onfrontations because she is aware that Stanley knows of her past.

However, it is inevitable for them to avoid each other with such a compact apartment, which puts Blanche under stress and fear that Stanley will make known her promiscuous past to Stella and Mitch, thus creating tension. From their language, we can see their culture difference. Stanley speech is littered with slang, he talks in a primitive, colloquial and crude way, as if he is hammering the sentences. For instance, miou going to shack you from Blanche? ” Blanche speaks eloquently with articulation and her constant literary references, like I’m looking for the Pleiades, the Seven Sisters” shows her sophistication.

Instant tension is created through their opposing language as Blanche is not used to being spoken in this way and it throws her off guard. Even from their appearance, they antagonise each other from their contrasting apparel choice. Stanley is dressed in Mvid green silk bowling shirt” which symbolises his bold, physical character and serves as a reminder of his violent treatment to Stella in Scene 3. Whereas Blanche is dressed in “white satin evening gown” “tiara”, this irritates Stanley because it reminds im of “Belle Reve” and their “superior” social background, which he detests.

This heightens the tension, as they are both aggravated. In scene IO’S opening, Blanche is “murmuring excitedly as if to a group of spectral admirers”, this shows her neurotic state of mind, how emotionally unstable she is. When Stanley sarcastically says “with that-gorgeous-diamond-tiara? ” he is deliberately teasing her, in order to get herself to confirm her own deceitful lies so he “biting his tongue which protrudes between his lips” and “softly’ saying “Come to think of it-maybe you wouldn’t be bad to-interfere with… ” The underlying sexual onnotation terrifies Blanche.

This line suggests to the audience that Stanley has an ulterior motive, as audience we are aware that even from Blanche and Stanleys primary encounter they have had a sexual attraction. It is illustrated in scene 2 when Stanley says, “If I didn’t know that you was my wife’s sister, I’d get ideas about you”, therefore tension ensues. This tension escalates throughout the play, gaining momentum until the scene before the rape. During this scene, Stanley finally gives in to his animalistic instincts under the influence of alcohol, making it a theatrical climax of the play.

In conclusion, Williams has successfully accumulated tension through Stanley and Blanche’s resentment, aural effects, language and dialogue; leading to an outburst of the tension- the brutal rape. Even Williams himself addresses that “the rape is pivotal… without which the play loses its meaning”. The melodramatic climax is essential because without it the tension built before is suspended, disappointing audience’s expectation. The climax profoundly affects the emotions of the audience because it changes the perspectives of the audience completely from accusing Blanche for her downfall to sympathising her as a victim. 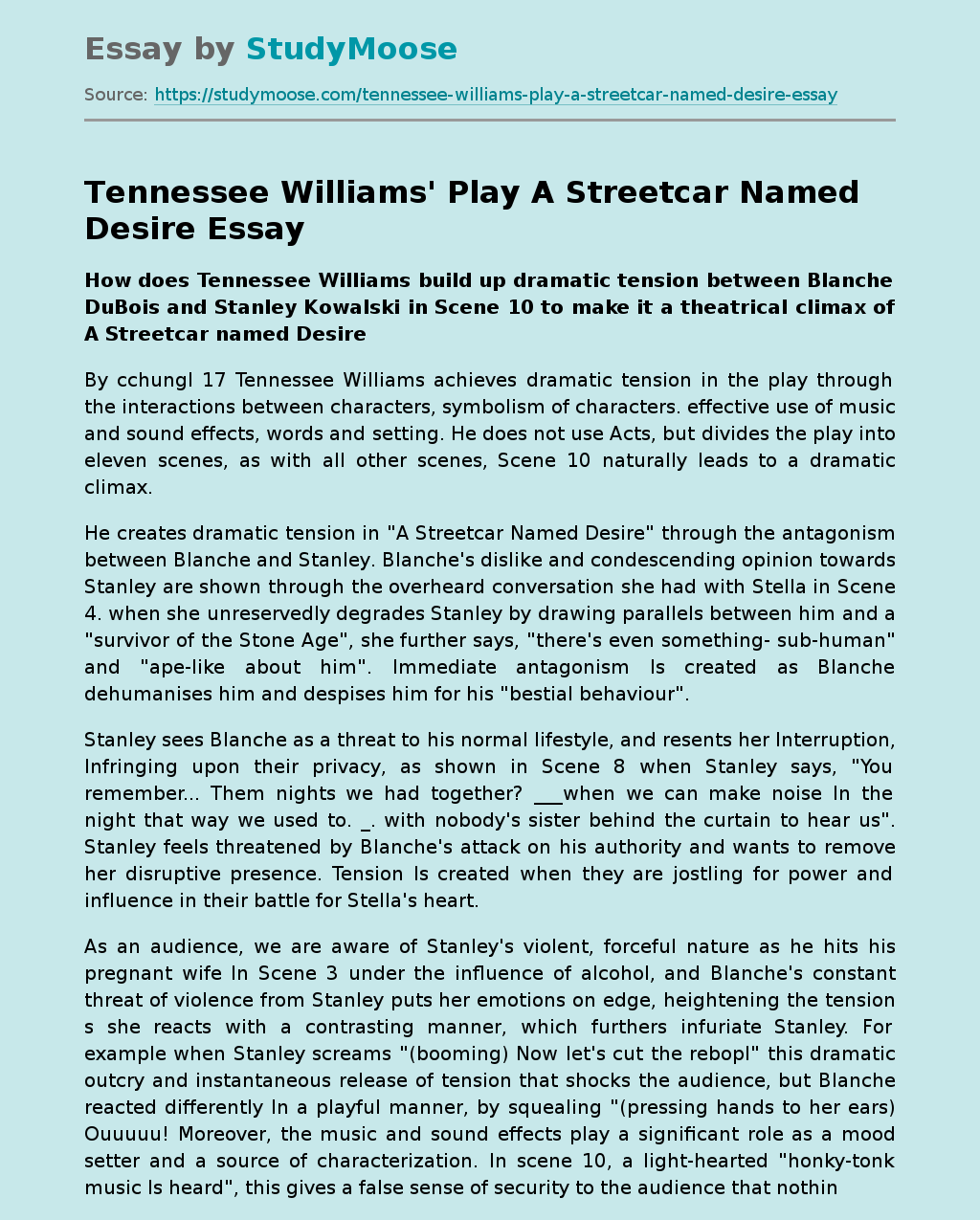