Sexual desires are a common interest several people tend to have and Blanche Dubois significantly portray and represents the theme of sexual intimacy in A Street Car Named Desire as Tennessee Williams uses allegory, allusion, symbolism, and foreshadow in order to demonstrate how do Blanche’s “trip” through several street cars correspond to the theme of sexual intensions. Each of the “street-car” or form of transportation Blanche rode in have a distinguishing name for each which provides a metaphorical ideology for the trains.

Don't use plagiarized sources. Get your custom essay on
“ Williams’ Play A Streetcar Named Desire ”
Get custom paper
NEW! smart matching with writer

Blanche riding in the “Desire” streetcar refers to the theme of sexual aspirations throughout the story which Blanche rides, as she “desires” it. Meanwhile, transferring to the next train “Cemeteries”, foreshadows her upcoming death or misfortune due to Blanche’s initial decision in search of “desire”. Additionally, Blanche concludes her experience of riding several streetcars with “get off at – Elysian Fields”.

Tennessee Williams uses allegory by illustrating Blanche Dubois’ chronological selection of streetcars from “Desire” to “Cemetery” and eventually “getting off” at “Elysian Fields”, the land of the dead according to Greek Mythology.

This allegorical transportation of events portrays Blanche’s poor decision making by initially selecting the “Desire” train, a metaphorical reference to her intimate sexual desires and eventually transitioning to the “Cemetery” streetcar foreshadowing the disastrous outcomes Blanche must endure for her ridiculous sexual aspirations.

Her journey ending at “Elysian Fields” foreshadows the possibility that Blanche may eventually die by the mere end of the story. This creative use of allegory by Williams significantly supports the theme of sexual intimacy and desires of the play due to its impactful sequence of literal events connoting the protagonist’s life. (322)

“he’s just not the type that goes for jasmine perfume, but maybe he’s what we need to mix with our blood now that we’ve lost Belle Reve.” (Scene 2, Page 45) Men used to take major initiative in most households during the early 20th century therefore, making wives, female siblings, or basically women in general highly dependent for a man’s authority. The theme of dependency for men continuously occurs throughout A Streetcar Named Desire and most noticeably when Blanche DuBois claims how Stella and her needs a man like Stanley Kowalski who can take command in terms of bravery and fearlessness. Literary features such as foreshadow, indirect characterization and metaphor creates the theme of dependency for men that Blanche significantly shows. She suggests through the use of metaphor that although Stanley is “just not the type that goes for jasmine perfume” by claiming Stanley’s unsophisticated traits such as the ignorance to appreciate poetry or scents like a “jasmine perfume” doesn’t cope with the DuBois’ traditional act of being refined and courtly which is currently what the DuBois family desperately need in their family in order to “survive” as social statuses transitions.

Right from the get-go, it is highly noticeable from Blanche’s speech and perception towards others by declaring Stanley is “not that type that goes for jasmine perfume” indirectly characterizes Blanche’s personality as someone who’s snobbish & conceited yet she’s also highly dependent towards others (in this case, rugged men such as Stanley) when she says the DuBois family need Stanley “to mix with our blood now that we’ve lost Belle Reve” demonstrating her tendency to use others when she’s desperately in need of help since the DuBois can no longer afford luxuries such as owning Belle Reve.

Blanche’s expresses need for authoritative men by using foreshadowing as Stanley is “what we need to mix with our blood now that we’ve lost Belle Reve” since people who resembles reminiscent traits which the DuBois family is often known for won’t withstand the social statuses currently trending as Blanche even considers pursuing the idea of Stella being a parent with Stanley since she currently believes that children who portray refined characteristics will most likely not bare the society trend but rather, being vulgar is preferable. (342)

This scenario verifies that ever since she decided to temporarily settle in Stanley Kowalski’s residence with Stella, he hasn’t positively perceived her as a person he’d cooperate with in the long-term which is very noticeable from Stanley’s tone when he defends his nationality. Stanley perhaps find the term “Poles” discriminating when Blanche labels him as one as there’s probably a personal issue which Stanley Kowalski believes his Polish ancestors might’ve done when they decided to settle in America.

“Poles”, Germans, and Austrians were previously known as Barbarians in contrast to the rising monarch civilizations French and Spanish civilizations once established and Blanche referring to Stanley as a “Pole” clarifies how she believes he displays traits reminiscent to his barbaric ancestry thus, ironically aggravating Stanley to acting equally barbarous by responding vulgarly. Since Nationalism is a recurring theme that numerous characters in A Streetcar Named Desire tend to display, characters who take pride of their country such as Stanley and Blanche should be indirectly characterized egoistic due to their conceit personality. 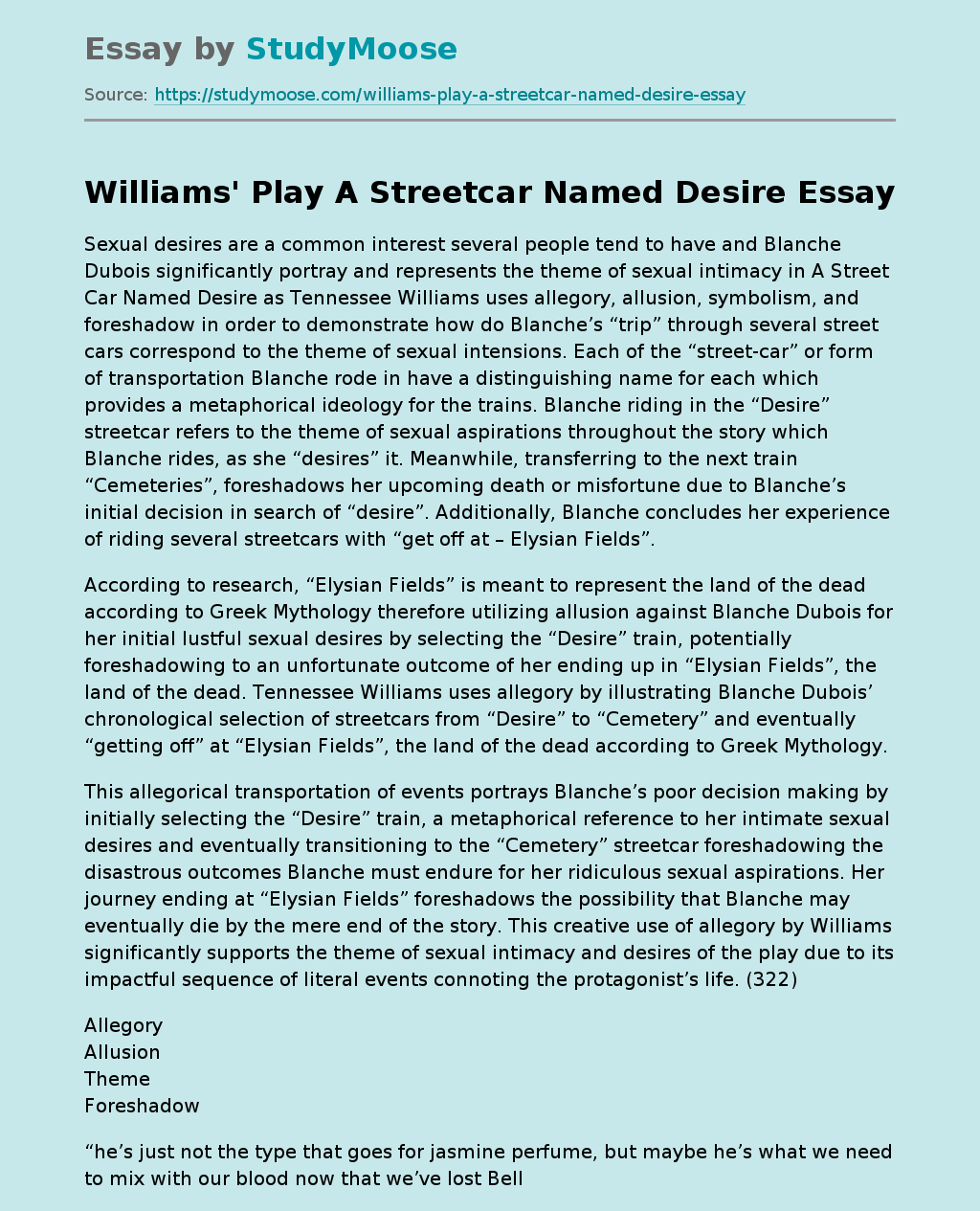