Setting can often reflect the underlying ideas in a play. In the light of this statement, consider the importance and use of setting in ‘Hedda Gabler’ and ‘A Streetcar named Desire’

Setting, with all its different uses, is essential in revealing the imprisonment of protagonists and the values of a society in ‘Hedda Gabler’ by Henrik Ibsen and ‘A Streetcar named Desire’ by Tennessee Williams. Both playwrights employ the use of setting in their plays to help reveal underlying ideas, giving the audience an insight to their respective society and the playwright’s purpose of showing how societies are responsible for imprisoning their own people.

Don't use plagiarized sources. Get your custom essay on
“ Comparative Essay: Setting in ‘A Streetcar Named Desire’ and ‘Hedda Gabler’ ”
Get custom paper
NEW! smart matching with writer

Williams displays the fortes and the flaws in 1940s New Orleans with his selection of setting. The setting in ‘A Streetcar named Desire’ reveals New Orleans’ carefree and come-and-go attitude.

However, the setting also surfaces the city’s lack of compassion. Ibsen uses the setting to display the entrapment enforced on the protagonist. The constant images of imprisonment such as the window are a constant but subtle reminder to the audience that Hedda Gabler is imprisoned by her 19th Norwegian, sexist and propriety orientated society; to which she can have no input to decide her future.

The setting used by both playwrights is essential in revealing the imprisonment of their protagonists, the values of a society in their respective plays as the set reveals the context of the play.

Tennessee Williams uses his set in A Streetcar Named Desire to show the incongruity of Blanche in 1940s New Orleans, ultimately displaying how she does not belong there.

The scene preceding Blanche’s entrance includes Stanley in his ‘blue denim work clothes’ carrying a ‘red stained meat package’ from the butcher. This reflects the appearance of the setting; a poor area of New Orleans, ‘weathered grey’ buildings with ‘faded white stairs’ complemented by a ‘brown river’ flowing nearby. The entrance of Blanche is inconsistent with this set as she is dressed in a ‘white suit with a fluffy bodice’, a ‘pearl necklace’ and carrying a ‘valise’.

She is literally incongruous with the setting’. Even her name; Blanche; which suggests purity and cleanliness, doesn’t match the setting. The audience has an instant response in this first scene; Blanche is obviously not appropriate to New Orleans in the 1940s as she is instantly contrasting with everything that is going on around her. Blanche’s first reactions give testament to he audience’s impressions as he is shocked by the house that her sister, Stella, lives in and has to ‘wearily refers to the slip of paper’ to make sure she’s at the right house.

This shows that she is not used to this kind of setting at all. As soon as she steps onto the set, Blanche is imprisoned by it. The ‘New America’ presented by the set is a jail for Blanche as she has no idea how things work and how to interact with women and particularly men. It seems that it is a constant barrier for her and she has nowhere to take refuge but her own mind where she speaks ‘faintly to herself’. It is recipe for tragedy. Williams has used his set in scene one to introduce the incarceration that Blanche experiences from the care-free and the come-and-go attitudes in New Orleans which continue until the end of the play.

However, Ibsen presents the entrapment of the protagonist; Hedda, in a different way; the proprietary orientated society and setting that she lives in. Hedda Gabler is set in a 19th Norwegian society that is proprietary orientated, in that it values money, social status and is very traditional. Most of all, women are subjugated. This setting is essential in revealing the Hedda’s captivity in her society as it puts what she says and interacts with in context, allowing the audience to understand the gravity of her tragic situation. As Hedda and John Brack are talking, Hedda becomes very bitter about her obviously dull life.

Brack starts to frustrate her with his hopeful and wishful thinking about her future, to which she eventually replies while standing ‘over by the glass door’ and ‘looking out’; ‘I’ve only got a gift for one thing in the world…….. For boring myself to death. She realises that in her society she has only two purposes; to marry and to have children. It is clear that she realises this because she knows how boring her life is and she doesn’t do thing about it. It becomes clear to the audience that Hedda is trapped by her own society in that it won’t accept her as a man would be. She knows that there is fun and enjoyment to be had.

One would say she can see it thought the ‘glass door’. But this, again, is a barrier for her that she can’t get past. This is what makes Hedda Gabler such a tragic tale; she knows what independence and enjoyment can be had outside the walls of her house (which she never leaves in the entirety of the play), but she cannot escape them. She knows her fate before she can do anything to change it. She is stuck with her boring life because her 19th century Norwegian society will not allow her to blossom. It can be seen that Ibsen uses his setting to allow the audience to put the tragedy of Hedda Gabler into context of what she says in the play, showing her bitter and inevitable imprisonment in her home from the outside world.

Common to both plays is the lack of compassion found within their respective societies emphasising the protagonist’s confinement in their societies to the audience. Henrik Ibsen displays the deficiency of sympathy found within the 19th Norwegian society in the ultimate scene of the play. As the climax of the play is reached, Hedda grabs her pistols and tragically shoots herself in the head. The characters representing selective parts of their society would have been expected to show some sympathy for poor Hedda but none is shown. Three characters are present when the suicide takes place; Tesman, Brack and Mrs Elvsted representing the scholars, the law and servant respectively in their society. None of these characters show any sympathy whatsoever to the now lifeless Hedda.

Despicably, Brack criticises her actions and exclaims ‘One doesn’t do that kind of thing’. This is a full representation of the lack of compassion in their society as before thinking about feeling sorry for poor Hedda Gabler, Brack exclaims that Hedda has done the wrong thing by the society’s values. From this, the audience can see that society’s values take priority over everything else. This ultimately shows that Hedda had no chance of branching out from her house from the start. It was always going to end this way. Tennessee Williams’ also shows the shortage of empathy towards the protagonist in the ultimate scene. When Blanche’s breakdown is manifested, the characters all around her, each and everyone representing the society and the setting they live in, show hardly any compassion.

Of all people who should have been helping Blanche, her sister, decided to call upon a doctor and a matron to take her to a mental institution. This is very confronting for the audience because if an average woman in 1940s New Orleans can’t even show compassion towards her sister and only family left in the world, then who will. In Both plays, this lack of compassion could be the clincher that led to the fate of both protagonists. All Blanch and Hedda ever wanted was just to fit into their respective societies. But the setting didn’t allow them to do so. The setting is ultimately fundamental in revealing the entrapment enforced on both protagonists as the characters representing the setting are able to show the audience the behaviour of their societies; which have deficits in levels of compassion.

The setting used by both playwrights is essential in revealing the imprisonment of their protagonists, the values of a society in their respective plays as the set reveals the context of the play. Ibsen’s Hedda Gabler and Williams’ A Streetcar Named Desire are similar in a way as their respective settings reveal the lack of concern and empathy for their respective societies; this deficiency in sympathy towards the protagonists; Hedda and Blanche ultimately leads to their tragic fates. However, the plays are different in that Blanche’s imprisonment in 1940s New Orleans is presented by her incongruity to the setting and New Orleans’ care-free attitude. Whereas Hedda is imprisoned in 19th century Norway by the social ranked, sexist and proprietary orientated society. 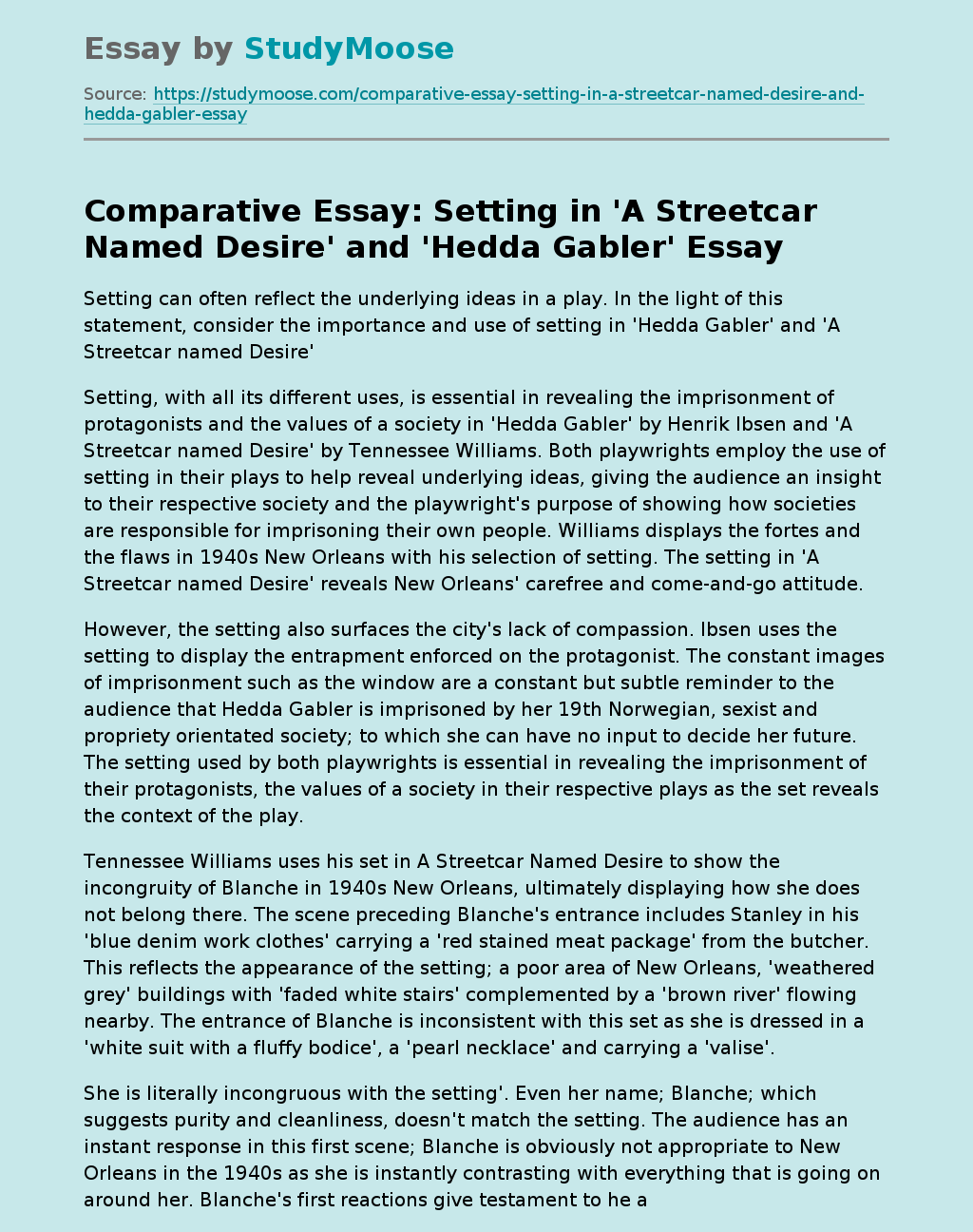