In Ibsen’s drama Hedda Gabler, Hedda was a wealthy woman with a great background, until she marries Mr. Tesman. When she is chained down to this man she starts to become unstable and reveals how truly devilish she can be. From manipulating her loved ones to down-right killing them.

These incidents occur because of jealousy and boredom. Hedda’s first act of despicableness is first presented when she talks to her husband’s aunt. She mentions that the maid will be unsuitable because “She’s left her old hat behind her on the chair.

Don't use plagiarized sources. Get your custom essay on
“ Hedda Gabler Essay ”
Get custom paper
NEW! smart matching with writer

”, when really, it was Miss Tesman’s hat.

We later find out when she is speaking to Brack that she had known all along it was her hat and just wanted to insult her. This shows how bored Hedda is where she feels the need to come up with something like that. She is also unhappy with her marriage so she doesn’t want to get close to any of her husbands family.

In act 4 of the play Hedda gives Lovborg a pistol so he can “die beautifully”. She does this because she is still somewhat attached to Lovborg and is jealous of him and Thea’s relationship that was forming. She even starts to go somewhat mad after Lovborg and Thea leave.

The manuscript begins to get ripped apart by Hedda, as she throws it into the fire saying, “I’m burning your child Thea!” This shows that she has basically reached a breaking point and has officially gone off the end.

Hedda is a very hard character to play. This is because she is very contradicting, as Ibsen states, “sympathetically unsympathetic”. You feel sympathy for Hedda because she seems to be broken. She has been socially trapped into marriage and baring a child.

Although this does not justify her actions which still keeps you scornful towards her. All in all Hedda is a very indifferent woman with a independence that she will not be taken away from her. She manipulates and deceives people in order to get her way. Yet she was slowly killing herself by doing so. This may be why her character is so hard to play, she is in a way, a very non-relatable character. 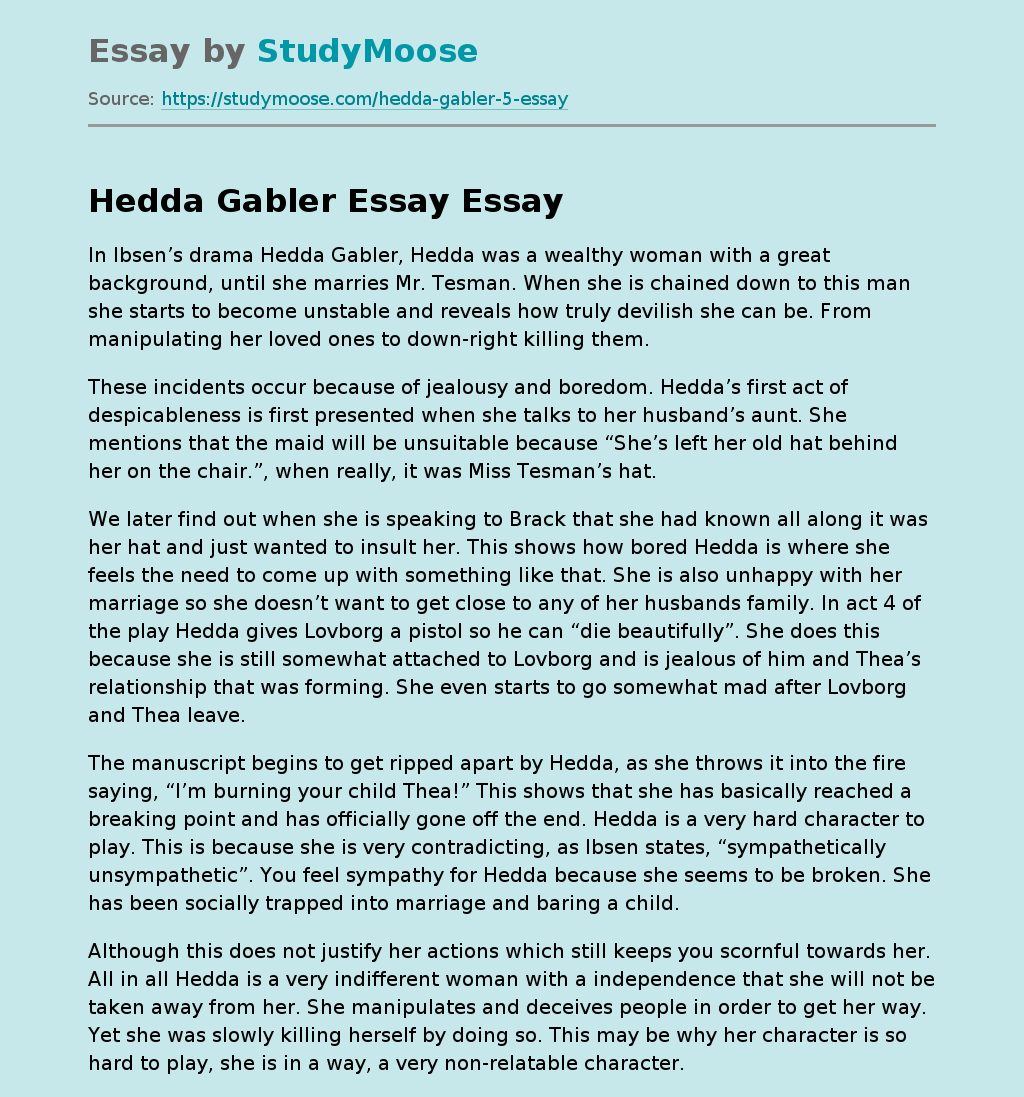