How do Robert Browing in Porphyria's Lover and Carol Ann Duffy in Human Interest present the emotions of love and jealousy?

The first poem Porphyria’s Lover begins with a very romantic tone, with a beautiful maiden meeting with a brooding young man. She then proceeds to light the fire, loosens her hair and reveals her shoulder, attempting to seduce him. Confused, he “debates” as to what he should do next and opts to strangle her with her hair. The second poem, Human Interest, concerns a prisoner sentenced to fifteen years for the murder of his unfaithful girlfriend.

There are many similarities between the two poems.

Don't use plagiarized sources. Get your custom essay on
“ How do Robert Browing in Porphyria’s Lover and Carol Ann Duffy in Human Interest present the emotions of love and jealousy? ”
Get custom paper
NEW! smart matching with writer

Firstly, both have a male persona detailing their romantic lives in a dramatic monologue. The effect of the first person narrative is to allow the reader a personal insight as to their state of mind during the murder, and how they feel reflecting upon their actions. The underlying suspicion and resentment felt towards their partners is also included, which are likely to be due to differences in class and the way they are viewed in society.

Another key similarity between the poems is the ironic twist: in Porphyria’s Lover, the macabre appears when he calmly murders the woman he loves, convinced that his actions are righteous and even to the extent that it is for her benefit. In Human Interest the irony becomes apparent when, after describing and justifying his crime, he insists that he “wouldn’t hurt a fly, honest”. This results in both poems being extremely thought provoking and slightly disturbing, lingering in the mind long after they have been read. A vivid and strking depiction of the two murderers and their feelings, in many ways they are more to do with the events surrounding the event, and the murderers’ states of minds, rather than the act itself.

Despite their many similarities, there are also many significant differences, which is almost certainly due to the differences between the poets themselves. Browning, one of the most revered poets from the Victorian age, is renowned for his dramatic monologues which explore the state of mind of historical or fictional characters. Porphyria’s Lover is similar to My Last Dutchess, another dramatic monologue in which the duke describes the portrait of his deceased wife to the man who is negotiating the Duke’s second marriage. There are hints throughout that the Duke may have been responsible for his wife’s death. Carolyn Duffy has also written many dramatic monologues, usually in which she explores different personas and what it means to be a woman.

The language used in each poem is diametrically opposed: the former includes old-fashioned phrases using correct grammar, and is written fluently in a romantic style. The other consists of much more modern language, the majority of which is non-Standard. It is unsophisticated and contains many grammatical errors and language which is widely regarded as taboo. The most noteable examples of this include “tart”, “prick” and “guts”.

The differences in formality has two main causes. Firstly, Browning was writing in the late romantic period, over 150 years before Human Interest. Secondly, the voice of the latter is considerably less educated, and the language used in his monologue reflects this.

Another fundamental difference is whether or not the women can be, to some extend, held responsible for the men’s actions. Human Interest is a crime of passion, allegedly committed due to the women’s disloyalty and ingratitude: “I slogged my guts out for her”. Porphyria, however, is entirely unsuspecting of her fate, and it is implied that her lover is mentally unstable, possibly suffering from schizophrenia. This is communicated by the way in which he calmly refers to her strangulation by “No pain felt she; I am quite sure she felt no pain”. He then proceeds to justify his actions, stating “And yet God has not said a word”. This view could also be obtained by the same “Porphyria” which is the name of a hereditary disease in which the person who has it suffers extreme pain resulting in paralysis and temporary insanity. Interestingly, “Porphyry” is a purple, marble-like stone which is extremely valuable, confirming the belief that Porphyria herself is wealthy and upper-class.

It could also be argued that, living in a patriarchal society, Porphyria would have been spoiled had she spent the night with her lover, and that her family may well have disowned or harmed her anyway. He wanted to preserve her purity forever, and the only way to do this would be by killing her. Human Interests, having been written in modern times, where women are equal, the man in seen as jealous and possessive. His inability to control her results in her death.

It is easier to empathise with the murderer in the former, whereas we are uncertain as to the motives of the second. This is slightly disturbing, and although the situations in the poems are similar, the effect on the reader is extremely different.

How do Robert Browing in Porphyria's Lover and Carol Ann Duffy in Human Interest present the emotions of love and jealousy?. (2020, Jun 02). Retrieved from https://studymoose.com/robert-browing-porphyrias-lover-carol-ann-duffy-human-interest-present-emotions-love-jealousy-new-essay 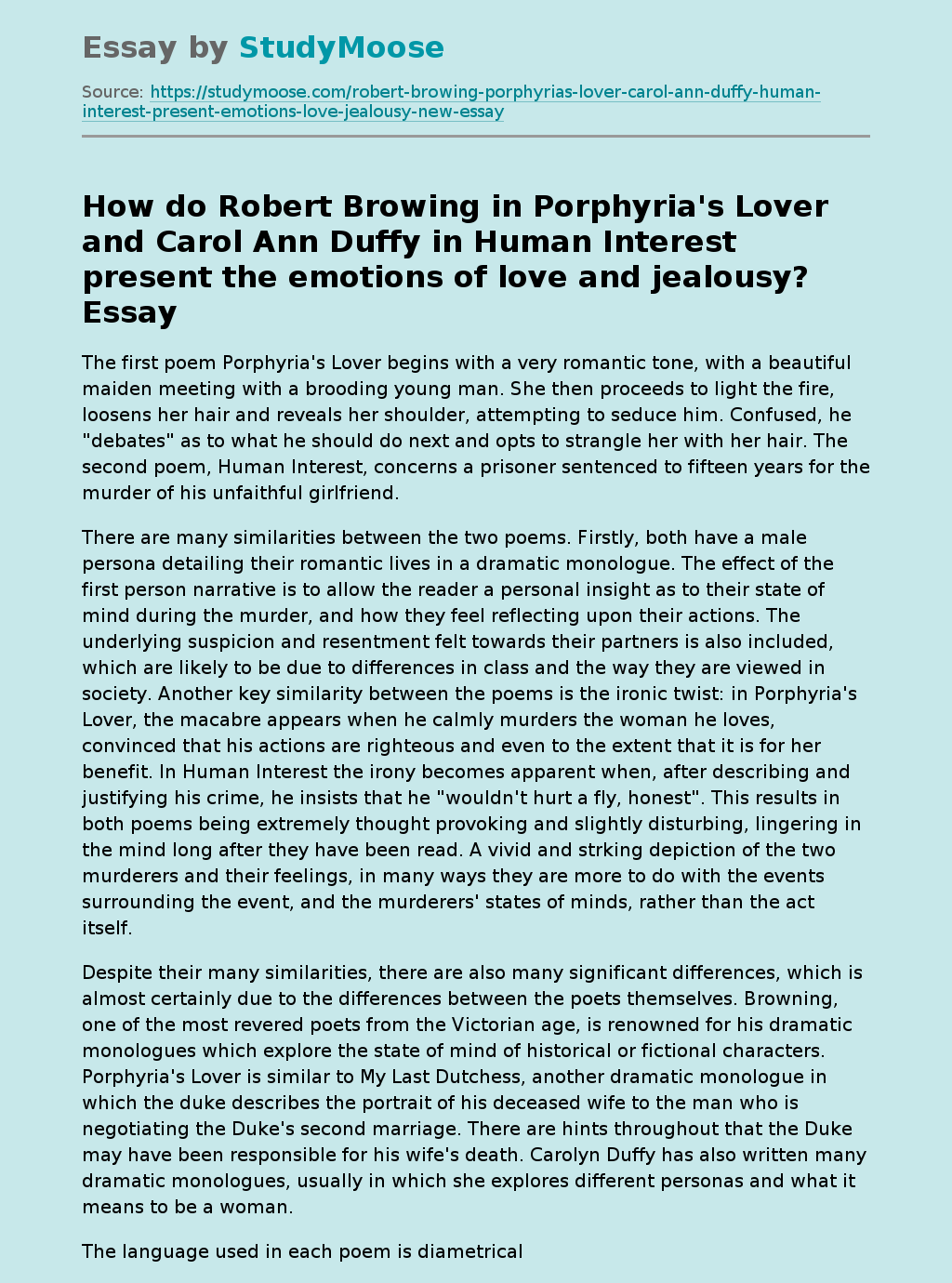