Porphyria’s Lover is poem by Robert Browning about a deranged man who suddenly kills his lover for his want to preserve the moment. He strangles Porphyria with her own long, golden hair and stays with the body for the rest of the night. A lot of interpretations have been formulated regarding this poem. The most popular one is that Porphyria’s lover is insane. Some argue that he rally isn’t and some say it was just on the lover’s mind.

Don't use plagiarized sources. Get your custom essay on
“ Porphyria’s Lover ”
Get custom paper
NEW! smart matching with writer

We would focus however on the [in]sanity of the speaker. No one in their right mind would kill a loved one, especially out of impulse.

Only those that show signs of mental instability are capable of doing such a horrific act. Signs of [In]sanity For a madman, the speaker sure is observant of his surroundings, he vividly describes the environment outside. “The rain set early in tonight,/ The sullen wind was soon awake,/ It tore the elm-tops down for spite,/ And did its worst to vex the lake:” (Lines 1-4).

Perhaps this was a sign that the speaker was still in touch with reality before the thoughts of killing his lover crossed his mind.

The first part also describes the actions that his lover does. “When glided in Porphyria; straight/ And kneeled and made the cheerless grate/ Which done, she rose, and from her form/ Withdrew the dripping cloak and shawl,And, last, she sat down by my side” (Lines 6,8,10,11, 14). These descriptions were made externally, meaning the speaker looked at his environment objectively which further suggests that he is still sane.

The next part of the poem, the speaker changes from being a rational/objective person to a judgemental individual.

He no longer describes what he sees externally but interprets them. “Too weak, for all her heart’s endeavor,/ To set its struggling passion free, Happy and proud; at last l knew/ Porphyria worshiped me: surprise” (Lines 22, 23, 32,33). The change in language in this part of the poem can be noticed. The language of the speaker changes from describing things and events from an objective standpoint, to describing what he feels about those things. This part is in contrast to the previous part where the speaker maintains objectivity in his descriptions.

The speaker even contradicts himself by saying that Porphyria is weak, when in fact, according to his earlier descriptions, Porphyria came from a harsh whether outside and is very capable of making fire. Most women can’t even start a barbeque. All these changes in the speaker’s character seem to have been caused by the expression of love by Porphyria “Murmuring how she loved me — she” (Line 21). Because it is after this line that the speaker radically change.

The speaker also starts out to be somewhat self-centerd at the mid part of the poem, in a sense that he uses more first-person words, proof that his descriptions are becoming more personal. These signs of lost of an objective view towards the environment are hints that the speaker is on his way to the nut house. The speaker does resort to describing objectively again but the act that he is describes is how he kills Porphyria. “A thing to do, and all her hair/ In one long yellow string l wound/ Three times her little throat around,/ And strangled her…” (Lines 38-40, and part of 41).

Only the uncertain tries to convince oneself like what the speaker does. This pattern of objective description of the actions of the speaker followed by his own interpretations on it is the pattern that the last part of the poem conveys. “I warily oped her lids: again/ Laughed the blue eyes without a stain” (Lines 44-45). He is now too insane to probably notice that someone who died, especially those who are strangled to death, would find it hard to smile even if they wanted to before they die. He also describes subjectively Porphyria’s face after he had strangled her. About her neck; her cheek once more/ Blushed bright beneath my burning kiss:” (Lines 47-48). Her face probably blushed as a result of the blood coming back to her face after blood was suppressed flowing to it. As if killing her lover was not insane enough, the speaker stays with the Porphyria and interacts with her as if she was still alive. “I propped her head up as before,/ Only, this time my shoulder bore/ Her head, which droops upon it still:” (Lines 49-51). It’s almost like how serial killers toy with their victims, admiring the work that they have done.

In the speaker’s case he wanted to preserve the moment of happiness. Conclusion The speaker of the poem is definitely insane. Evidence in the text (as shown in the preceding paragraphs) show the speaker’s transformation from an objective person to person who lost his touch with reality. The speaker’s subjective interpretations of his environment betray his flaw. He first starts out as a man who objectively describes what he sees and does not contort it to what he wants to believe. He then transformed into an insane person, killing Porphyria in the process and convincing himself that it is for the good. 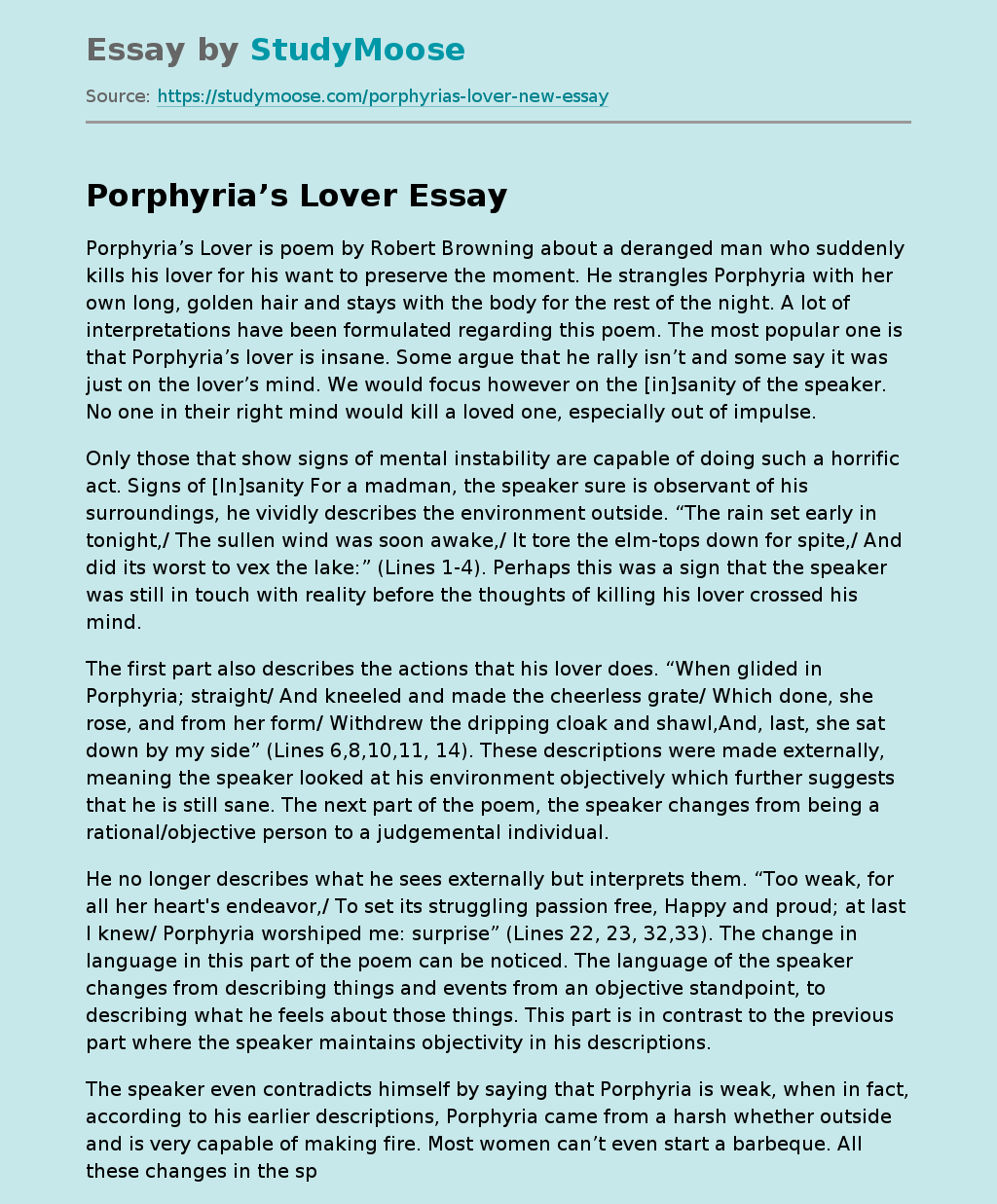