Comparison of A Doll's House and A Streetcar Named Desire

Multidimensional characters can also be defined as dynamic or constantly changing and developing characters. These dynamic characters are not simply important to a play, but are arguably the most important characters because what the playwright intends to communicate to his or her audience is communicated through the changing emotions and behaviors of these characters.

Turn in your highest-quality paper
Get a qualified writer to help you with
“ Comparison of A Doll’s House and A Streetcar Named Desire ”
Get high-quality paper
NEW! AI matching with writer

Additionally, playwrights use a variety of techniques to highlight the changes an important character may go through. The dialogue, staging and stage directions, setting, music, lighting, and even costumes can all be used to highlight a multifaceted character’s emotional and physical changes. In A Doll’s House, by Henrik Ibsen, and A Streetcar Named Desire, by Tennessee Williams, the playwrights primarily use costumes, which parallel the emotional and behavioral changes of important dynamic characters, and contrast in dialogue to amplify developments and changes in the characters’ relationships and behavior.

Ibsen’s choice of costume design portrays Nora as a dynamic character in A Doll’s House. Ibsen changes Nora’s costume to parallel her behavioral and emotional changes in the play. The “Neapolitan fisher-girl” costume, for example, represents Nora’s secrets and their restraint on her autonomy (Ibsen 29). Therefore, Nora’s want to “tear [the masquerade costume] into a hundred thousand pieces” represents her will to be rid of her lies and to take off of the mask she puts on for Helmer (Ibsen 28).

The costume facilitates this need throughout the second act of play. When Nora practices the Tarantella dance, she dances wildly and “her hair comes down and falls over her shoulders” (Ibsen 47).

Wild and free hair has connotations of independence and liberation. Therefore, the costume begins to show the audience her will to free herself from the mask she puts on for Helmer. However, she remains in the dress at this point in the play meaning that she is still restricted by the disguise she wears for Helmer’s satisfaction. Again, the dress highlights Nora’s development when it is removed in Act III before Nora gathers the courage to tell Helmer she must leave him to gain her independence. Nora’s masquerade ball costume conveys how Nora’s lies and mask of happiness restrain her freedom and helps to illustrate her eventual escape from them. Therefore, the costume design amplifies the characteristics that make Nora a dynamic character.

Williams also uses his costume designs to characterize his dynamic characters in A Streetcar Named Desire. However, rather than connecting a specific costume with a feeling, he associates a general type of costume with specific emotions and actions. For example, the lavish costuming of Blanche represents the extent of her desire for, and delusion of, an extravagant life. As the play opens and Blanche enters, her appearance is described as “incongruous to [the] setting” (Williams 15). She is introduced being dressed as if she believes she should be somewhere and someone else. Furthermore, her beauty from the “white suit with a fluffy bodice, necklace and earrings of pearl” is described as delicate and sensitive to light (Williams 15).

This description of Blanche suggests that her rich and royal appearance is purely superficial and does not represent the reality of her life. This connection between costume design and Blanche’s fabricated reality is continued throughout the play. Before beginning to flirt with the young paper boy in Scene Five, Blanche “takes a large, gossamer scarf from the trunk and drapes it about her shoulders”, and then begins to pretend he is a young Prince and later makes Mitch bow to her (Williams 84).

The playwright, Tennessee Williams, connects Blanche’s affluent adornment with her delusions of wealth and importance that develop and grow stronger as the play progresses. In the final scene, Blanche’s illusions blend almost entirely with her reality as she asks Stella to gather a number of elaborate accessories, including a cool yellow silk boucle and “a silver and turquoise pin in the shape of a seahorse”, and dresses herself in a dress and jacket of a color that Madonna once wore (Williams 132/135). Williams uses this costume to amplify the absurdity of Blanche’s illusion of spending her life on the sea with a millionaire. Therefore, Blanche’s costume choices in A Streetcar Named Desire connect to her developing insanity, which makes her a complex and dynamic character.

In A Doll’s House, Ibsen also utilizes tension in dialogue, specifically the tension between Nora’s inward and outward expression of feelings surrounding worth, to portray Nora as a dynamic character. The playwright first creates a contradiction between her internal and external feelings, only to eventually change her apparent expression to match her true feelings. In the first two acts of the play, Nora’s outward expression of a woman’s worth revolves around being a good wife and mother by aiming to please Helmer, her husband. However, her inward feelings portray the opposite. Nora inwardly believes that worth involves being true to herself. Nora is outwardly submissive to her husband by allowing herself to be called by possessive pet names, such as his “little spendthrift”, his “squirrel”, or his “extravagant little person” (Ibsen 2-3).

Furthermore, even Nora uses these labels for herself during the first two acts. These names put Nora in a submissive position because they define Nora as a possession of Helmer’s. Therefore, when Nora labels herself a skylark or squirrel, she outwardly submits to the will of her husband, proving her external idea of worth revolves around his happiness. However, whenever Nora yields to Helmer, there are undertones of sarcasm within the dialogue portrayed both by the stage directions and the writing. When Nora first calls herself Helmer’s skylark and squirrel, she does so while “smiling quietly and happily”, as if she aims to manipulate him with her words (Ibsen 4). This example of irony mixed with manipulation illustrates the contradiction between what Nora outwardly expresses and what she internally believes.

Nora’s sarcasm is also present directly in her dialogue with Helmer. In the conclusion of the first act, Nora asks Helmer to “take [her] in hand and decide” how she should attend the masquerade ball (Ibsen 25). The sarcasm she speaks these lines with is evident when she utilizes hyperboles to appeal to Helmer’s ego, such as telling him “no one has such good taste” and that she “can’t get along a bit without” his help (Ibsen 25). Therefore, Nora’s exaggerated submission to Helmer suggests a dichotomy between her internal ideas of worth and her actions. Yet, as the play develops, Nora’s actions begin to match her interpretation of value. She begins to overtly become a subject of her life, rather than the subject of her husband’s.

In the final pages of Act III, Nora discards the view she externally portrayed in the first acts of A Doll’s House by explicitly rejecting Helmer’s assertion that “before all else, [she is] a wife and a mother” (Ibsen 66). She explains to Helmer that she believes that “before all else [she] is a reasonable human being… [who] must think over things for [herself] and get to understand them” (Ibsen 66). This rejection of blind obedience and assertion of autonomy supports the claim that Nora’s outward expression developed over the course of the final act to match her opinion of worthiness. Because Nora’s expression of merit changed over the course of the play, she is considered a dynamic, or multifaceted character. Therefore, Ibsen’s use of dialogue in A Doll’s House is instrumental in portraying Nora as an important and multidimensional character.

Tennessee Williams also uses tension in dialogue within his play, A Streetcar Named Desire, to portray his significant characters as multidimensional. However, rather than creating tension by using contradiction to develop a single character’s dialogue, Williams creates tension by contrasting the dialogue of Stanley and Blanche. This distinction between the two characters, and the way they communicate in the play, causes behavioral changes suggesting that dialogue is responsible for dynamic transformations in the characters’ actions. Blanche’s speech is educated and full of literary illusions. She uses a reference to the gothic poet Edgar Allen Poe to describe her sister’s life and situation by calling her neighborhood “the ghoul-haunted woodland of Weir” (Williams 20).

This complexity present in Blanche’s dialogue portrays her as a representation of the old, aristocratic South. In contrast with Blanche’s more sophisticated way of speaking, Stanley uses simple societal based metaphors and commonplace clichï¿½s in his dialogue. Rather than using a literary based metaphor for Blanche, Stanley uses one based on politics. Stanley describes her fame in Laurel “as if she [were] the President of the United States, only she is not respected by any party” (Williams 99).

Additionally, the clichï¿½s Stanley uses in his speech, such as “no, siree, bob”, “boy, oh, boy”, or “the jig was all up” portrays Stanley as the down-to-earth representation of the New South (Williams 100-101). The contrast between the dialogue of the two characters and the connection it has with the social group they identify with highlights their dynamic characteristics by emphasizing Blanche’s attempt and ultimate failure to integrate herself into the less aristocratic and educated New Orleans. Therefore, the playwright’s effort to contrast the dialogues of Blanche and Stanley facilitates Blanche’s representation as a multifaceted and changing character in A Streetcar Named Desire.

Analyzing how a playwright portrays his or her dynamic characters gives insight into what the playwright intends to say through their development. For example, Henrik Ibsen uses a single costume to connect the audience with Nora’s progression into an autonomous woman in order to focus the audience’s attention on a single facet of Nora’s life and desires, while Williams uses many costumes with varying degrees of lavishness, to highlight the degree to which Blanche blends reality with fantasy.

Furthermore, Ibsen uses tension in dialogue of a single character to keep the audience’s focus on Nora, while Williams contrasts the speech of two characters to highlight the contrast between two different social worlds, the new and old South. Therefore, the most important characters in a play are always multidimensional characters because most of a playwright’s commentary is included in the development of these characters and analyzing the techniques a playwright employs to distinguish a dynamic character helps to convey meaning.

Comparison of A Doll's House and A Streetcar Named Desire. (2017, Nov 12). Retrieved from https://studymoose.com/comparison-of-a-dolls-house-and-a-streetcar-named-desire-essay 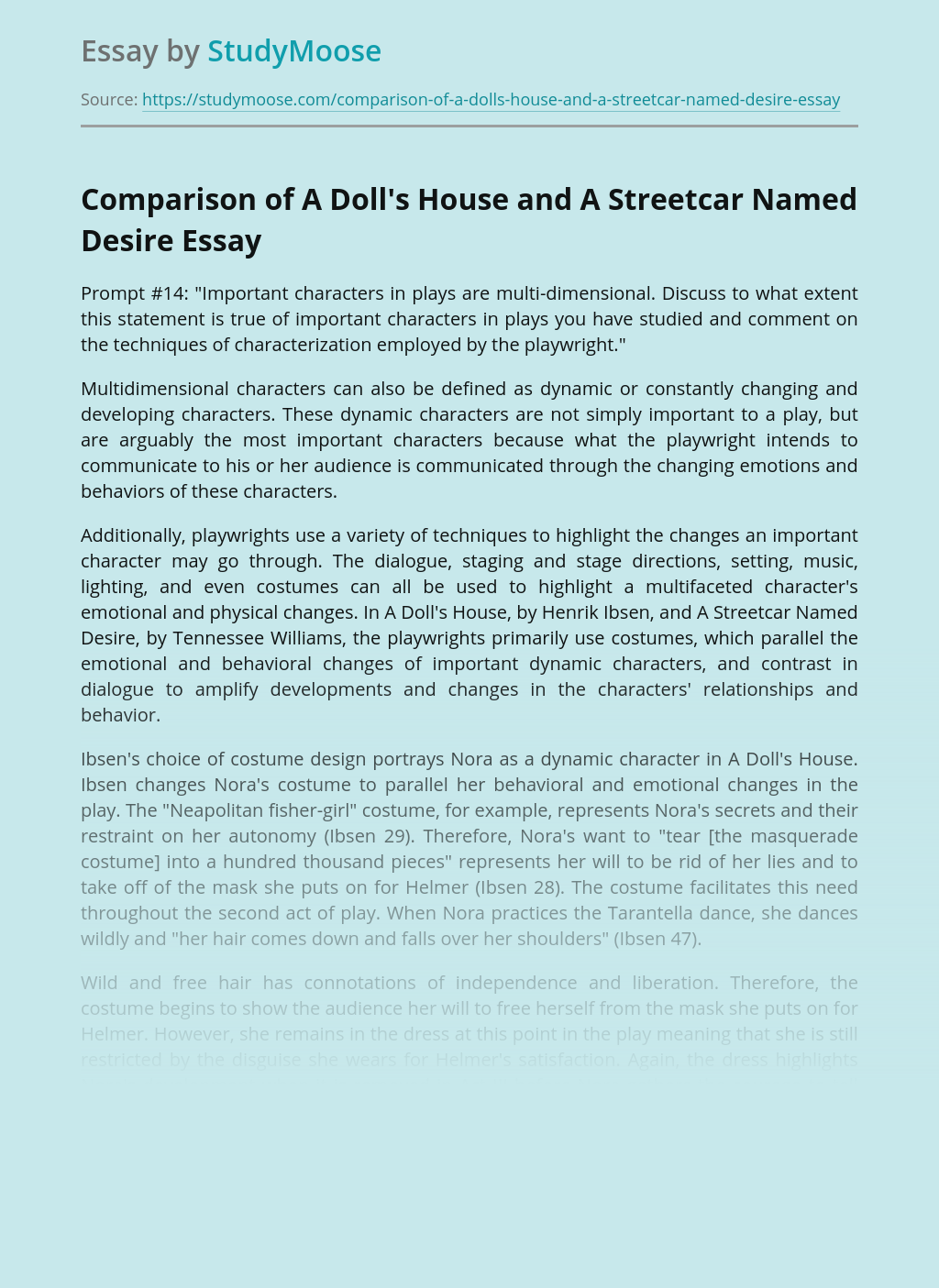 Turn in your highest-quality paper
Get a qualified writer to help you with
“ Comparison of A Doll’s House and A Streetcar Named Desire ”
Get high-quality paper
Helping students since 2015
Stay Safe, Stay Original