The Stone Age was the millennium of the modern world. The Neolithic and the Paleolithic eras consists of many comparisons within entities regarding the usage of stone tools, the development of art paintings, and the differences in physical geography that has shaped the world today.

Don't use plagiarized sources. Get your custom essay on
“ The Stone Age ”
Get custom paper
NEW! smart matching with writer

These chipped stone tools were often use for defense, hunting animals, or cutting. Also other tools were made out of bone, ivory, and antlers from deer or another creature. The Neolithic and the Paleolithic eras had some similarities, like how hand axes were in the shape of a pear for easy holding for when cutting or killing an animal.

Along with the pear shaped hand axes, there were other kinds of tools during the Paleolithic era.

Like many tools, the flake tools had a different technique to making it. Flake tools are made by knocking large flakes off a bulky stones. When flakes of stone chipped off it created a sharp edge. While taking the development of stone tools was taking place in the Paleolithic era. The Neolithic progressed their tool making by creating a flat harpoon that could be held at ta safe distance while killing an animal. The flat harpoon was made of resources that were available like staghorn or deteriorated bone. The harpoons in the Neolithic era related to similar tools in the Paleolithic era. A similar tool that is shred in common is the chipped stone tool and the flat harpoon. The stone part was usually shaped into geometric shaped like rhombuses, triangle, and segments of a circle. An archeologist that lives in Boston, Massachusetts, describes the shaping of stone heads as “…. It’s amazing how such a creature knew how to shape stone into any geometric shape…..”(Braidwood). The stone tools of the Neolithic and the Paleolithic eras helped later on in the Stone Age with cutting up resources to make pigment or paint.

Prehistoric art was the way early people told stories or rituals, and hunted. Art in the Paleolithic and Neolithic had some resemblances, but were very uniquely different. As years progress to the 1800’s dwellings started popping up in Northern and Western Europe, Spain, and Dordogne of France. Dating back to 14,000 to 13,500 B.C. in the Paleolithic era. Paintings became discover by explorers and archeologists by accidents. Many paintings in cave dwellings told how animals were hunted, and how stories were told. Paintings uncovered in Europe included stories of how animals were hunted with tools or harpoons. France widely became popular in the late 1870’s with a cave discover in Lascaux, France. Lascaux was discovered in 1879. The cave in Lascaux had paintings from the Paleolithic and the Neolithic periods that had been describe as “The large watercolor paintings were the finest examples of the Neolithic and Paleolithic life through art.”(Mazonowicz: 6).

Many paintings in this famous cave dwelling were cattle, bison, and horses. The paintings looked the same until a closer look; archeologists believe that the paintings are different. Close up a Paleolithic cow may have one horn, but a cow in the Neolithic era may have two horns. After the outbreak of prehistoric art, in France, dwellings all over Europe and in Spain that had art from the Paleolithic and the Neolithic eras. Historians correspondingly say that the Stone Hedge in England. The Stone Hedge is a cluster of stones put together in a circle. People come from all over the world; many have described as “…..it was a very moving and unforgettable experience” (M. Cascone). As the art was part of life physical geography was the way Homo sapiens defined themselves to have walked the Earth long before us. In the Neolithic era the climate in the north was very cold. As the cold was an everyday thing to the Neanderthals, many had to learn to build shelter to keep warm in the cold.

The Neanderthals that lived in the Neolithic era built hut or homes out of mud bricks, which shows how the early humans developed a little more knowledge. The mud bricks provided an instillation to the hut for warmth when they lit a fire in their house. The location had to correspond with what the Neanderthals would wear. The Paleolithic era after the glaciation was very warm, the houses compared to the Neolithic era, is the homes in Paleolithic era were made out of mammoth bones covered with animal pelts, such as cattle and bison. Physical geography played a big part in the Paleolithic and the Neolithic eras. The location also had to do with the food supply for hunting and gathering, and food to be hunted for eating. Some animals became scarce to the Neanderthals. In the north cows were very scarce because the cows would die of frost bite or being famished, due to the lack of grass and other resources. The Neanderthals ate mostly nuts, berries, and other things they could scrounge up to eat. However, the Neanderthals that lived in a warm climate like in Africa were very well fed.

They became well fed to the supply of cows grazing in to meadow and the horses running wild in the meadows as well. These animals were the most hunted, or once in a while a bison would be walking to go to the watering hole for a drink, and would be hunted to be eaten by the Neanderthals. Animals nearby to the Neanderthals provided clothing to the early humans. The early humans that lived in Africa had very light clothing because of the warm climate. Some of the clothing may include a deer pelt in the design of a dress. Yet the Neanderthals that lived in the north had a more thinker clothing usually made out of mammoth skin. Some of these types of clothing may consist of pants or a shirt design made out of mammoth pelt of thicker skin.

As you can see the early humans before us were knowledgeable on how to use their resources wisely, knew what animals they could eat, and many other things. The creation of early stone tools helped to cut, scrape, and take down large animals, such as mammoths. In addition how the power of stone tools let the Neanderthals cut fruit, berries, and mashed leaves into pigment for paints to create art that would last a life time on cave walls undisturbed. Art paintings being discovered in France led to the outbreak of discovery in all of Europe. Artwork and paintings had to do with how Neanderthals lived in different places, how the climate was there, and what resources were available for them to hunt and eat to survive. If early humans had never walked the Earth two million years ago we would not be here today with the technology we have developed. 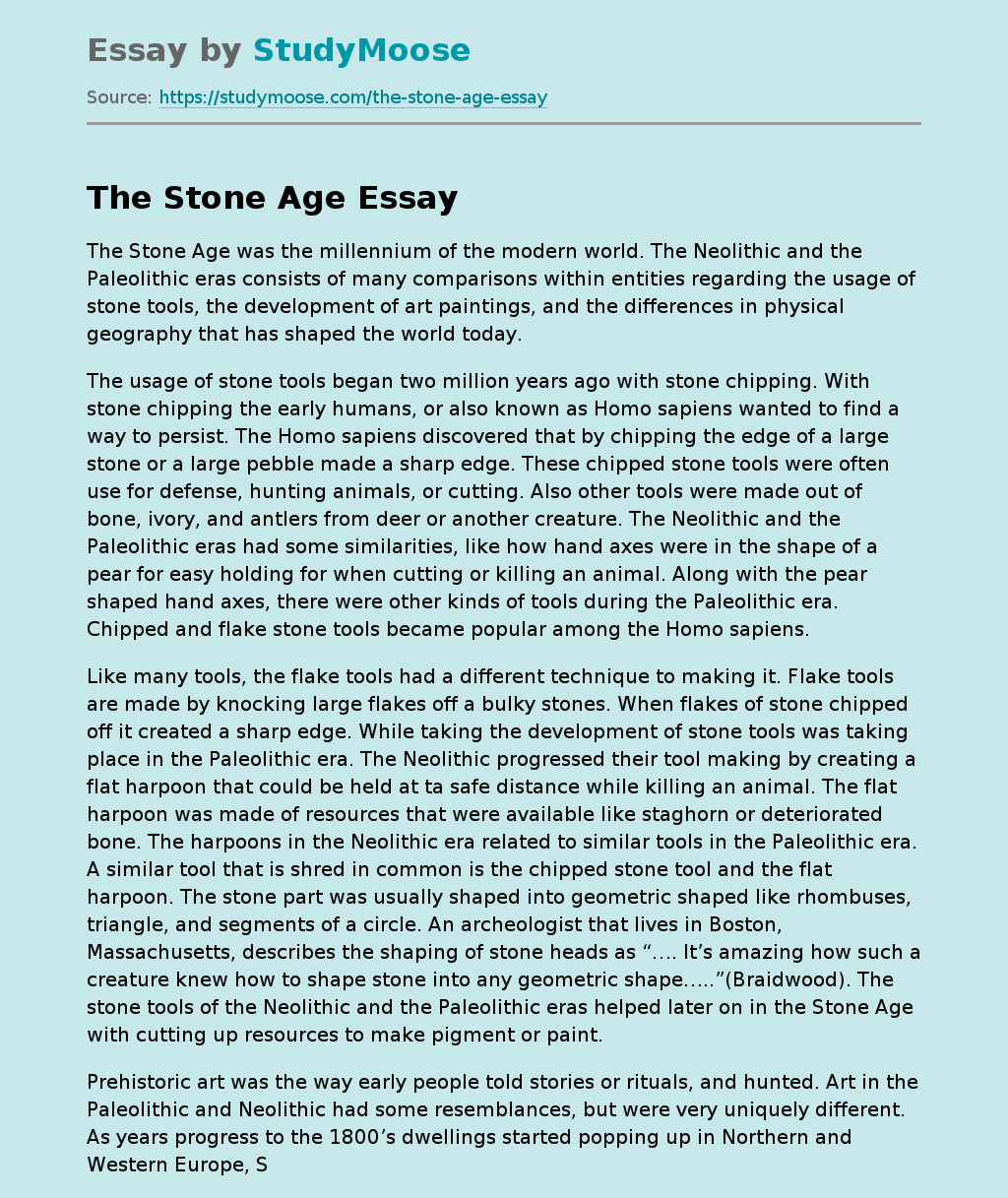