The community’s economy was apparently based on agriculture, along with a developing practice of cattle raising. Also it is the first established city to have employed the exchange of goods with distant regions. The first ornamented pottery, metal works and large animal grazing was undertaken here. With established methods of agriculture, the people of Catal Hoyuk grew three types of wheat and barley as well as many other varieties of grain and cereal. It is also known that they produced oils of maize, wheat and peanut.

Turn in your highest-quality paper
Get a qualified writer to help you with
“ Catal Huyuk – Information on Economic Patterns ”
Get high-quality paper
NEW! AI matching with writer

Catal Huyuk was a primary source of Western civilization, a nexus of trade and ideas for two thousand years, the first organized cosmopolitan city-state and arguably the source of the Great Mother Goddess religion.

Catal Hoyuk’s houses with their wall paintings, bulls’ heads and statues clearly indicate that the local people had obvious beliefs and acts of worship. Despite profuse religious motifs, there does not appear to be any signs of offerings or sacrifices.

There are no suggestions that any animals were sacrificed or any pits were made for the storing of sacrificial blood.

Catal Huyuk has yielded among other splendors, a unique sequence of sanctuaries and shrines, decorated with wall paintings, reliefs in plaster, animal heads, and containing statues, which give us a vivid picture of Neolithic man’s concern with religion and beliefs. Of the discovered paintings, most display religious concerns. In all the homes the religious paintings and statues have the heads of animals with horns.

Some houses have peculiar differences to them; for example, small areas found are considered to be areas of worship.

According to current thinking, when an important member of a house died, the house was emptied and closed. When the house was opened at a later date it was done so with a sacred intention. An entrance to these interior graves supports this theory. Apart from using the dwellings as a place of shelter, the fact that they were used as places of worship suggests that the people of Catal Hoyuk were on their way to developing other sites for worship and evolving through a stage of worship oriented religions

The raised banks in the houses were also used for the burial of the dead and were covered with woven mattings thought to be earliest forms of kilims. After death, corpses were thrown to vultures and then the skeletons were cleansed and wrapped in soft cloth while the skulls were painted and decorated and buried in the homes. These scenes are depicted in paintings found on the walls of the dwellings. It has also been found that gifts were left in the graves. According to status, the gifts in the graves vary; for example, in the graves of women, obsidian mirrors and jewellery were found while in the graves of men, flintstone and spear heads made from the obsidion stone appear.

Catal Huyuk was situated along the southern edge of the great salt depression in central Anatolia. It was likewise on the northern edge of the fertile Konya Plain. Catal Huyuk lies 3000 feet above sea level, and actually was built in two areas, leaving two mounds. Catal Huyuk literally means “fork mound” in Turkish. The largest is 32 acres in size, and with combined population, sould be considered a large city. By the 7th millennia Catal Huyuk was a trade center, long before the ancient cities of Mesopotamia could be called more than villages. The city lies along the edge of a small river, outlined by a few scattered poplars, and nearby are crater lakes, though the water at the crater is unfit. The plain stretches away, and one can see for miles, as far as the volcanoes, now called Hasan Dag.

Basic square shaped dwellings and flat roofs, Catal Hoyuk’s architecture was primitive. The entrances to the attached buildings were via the ceilings. Despite being very close in proximity to one another, the houses display separate walls with a small gap between them. The walls were built with sun-dried mud bricks supported by wooden beams. This technique is called “himis” and is still utilised in certain areas of Anatolia. The small doorways in the houses are thought to have been for small domestic animals to get in and out. The inhabitants of Catal Hoyuk used the flat roof tops as a means of getting from one dwelling to another. The roofs were made from clay, wood and reed. The roof tops were a convenient place to carry out daily activities as the interiors of the houses had poor light and ventilation.

Items of charm and religion in the shape of statues, reliefs and paintings can be found. The paintings adorned the mud-brick walls, which were often painted over again by using a thin layer of plaster to cover former drawings.

The people of Çatalhöyük made many different types of figurines out of clay and stone. Some were crudely made animals, including sheep, goats, cattle and pigs. The more refined figurines include female statuettes, some holding animals, and seated male figures. Some of the female figures are very plump and others appear to be giving birth to both humans and animals.

The wall paintings with their geometric designs also depict groups of people hunting animals, the flesh of headless humans being devoured by giant vultures and what appears to be a volcanic eruption. Among these Neolithic dwellings simple vessels, obsidian tools and statues of what is interpreted as being a Mother Goddess have been found. In one shrine a mural painting depicts the eruption of his volcano. The volcano may have represented a goddess figure. This sample of artwork is dated to about 6200 B.C.

The oldest known woven material is known to have been from 7200 B.C.. It is estimated that it was used to wrap cleansed corpses with before a burial ceremony. In the late Neolithic Age, it became tradition to dress the dead in cotton clothing. Even though the woven materials of the time have not survived, with their drawings and traditions we can still trace them today. The adornings on Catal Hoyuk’s walls with their abstract figures can almost
be perceived as being identical to that of Anatolian kilims. Over time, there must have been some form of cross influence between these wall paintings and patterned woven material. The figures on typical wall paintings are still found on the kilims of many regions of Anatolia. The most important figure being of the Mother Goddess. 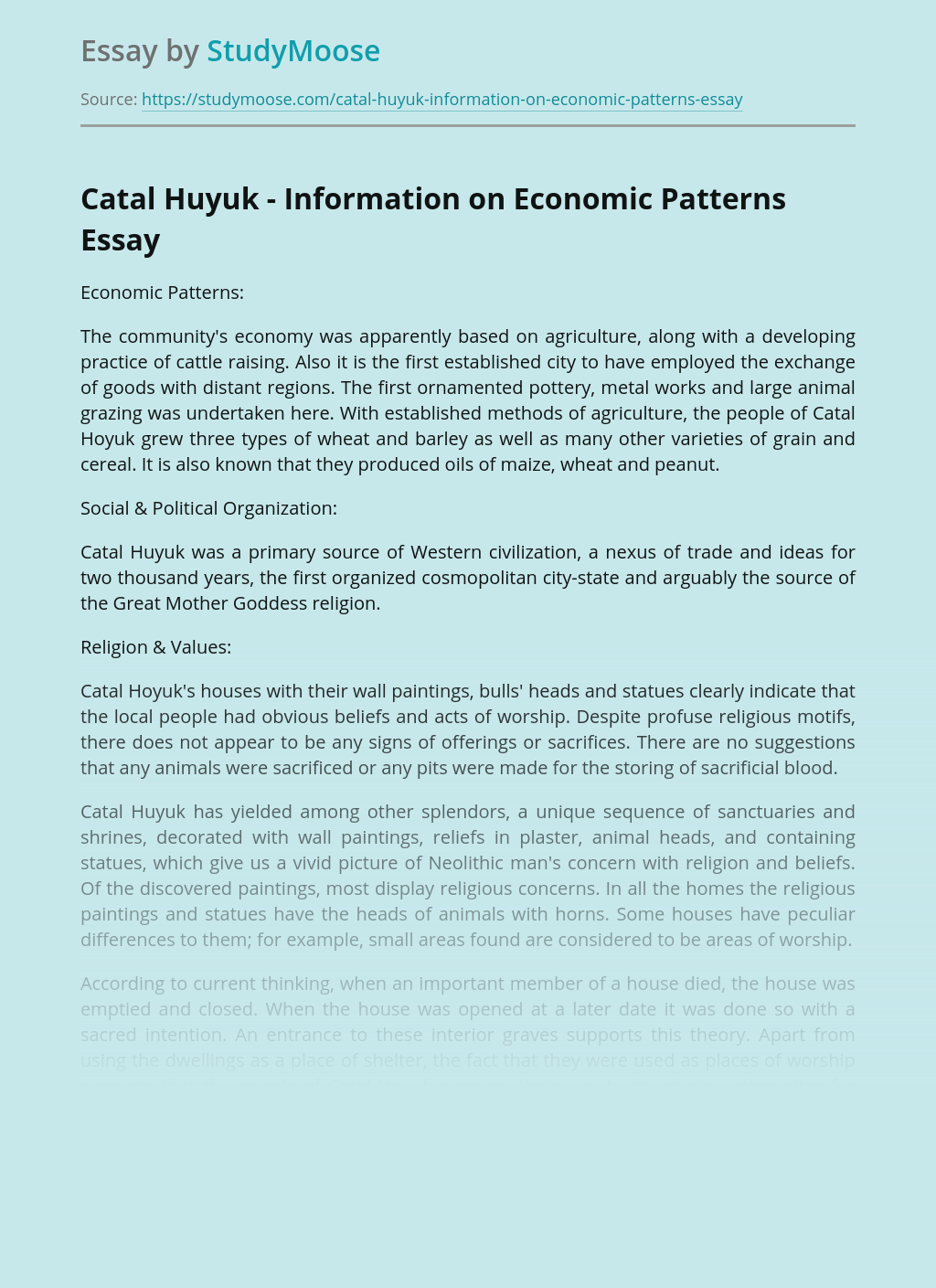 Turn in your highest-quality paper
Get a qualified writer to help you with
“ Catal Huyuk – Information on Economic Patterns ”
Get high-quality paper
Helping students since 2015
Stay Safe, Stay Original