"The Chambered Nautilus" by Oliver Wendell

The Chambered Nautilus by Oliver Wendell Holmes, is one of the famous American Renaissance poems. Like most American Renaissance poets, Holmes tries to decipher the mysteries and meanings of life. As a doctor and a poet, Holmes uses a creature from nature-the nautilus-to try to explain the meanings of life. By using extended metaphor while using the nautilus, in The Chambered Nautilus Holmes unravels the mystery that is life.

In the first two stanzas, Holmes describes the anatomy and structure of the chambered nautilus.

Don't use plagiarized sources.
Get Your Custom Essay on “The Chambered Nautilus” by Oliver Wendell Just from $13,9/Page

Holmes describes the anatomy of nautilus using a variety of metaphors. The ship of pearl as he calls the nautilus for its pearly shell. As part of his description, Holmes tells the sailors legend of the chambered nautilus. He begins describing the legend with the purpled wings used for sailing the seas. Next, he alludes to Greek mythology when telling the legend, by saying sirens and sea-maidens swim in the same bay where the chambered nautilus is found sailing.

The second stanza one can imagine Holmes finding a cracked nautilus sunless crypt unsealed on a sandy beach, holding it in his hand, and talking about life. This same method is found in the scene in Hamlet, where Hamlet holds a skull in the light and talks bout life and destiny. Holmes starts speaking of how the chambered nautilus worked so hard to build its shell, pointing out that after all this work it ended up like most organisms: dead.

In the third stanza, Holmes continues to describe the cycle of the nautilus as well as the time and effort the chambered nautilus put forth to build. According to Holmes Year by yearspiral grew the chambered nautilus adds a chamber each year and seals it to increase its buoyancy above water. In the last three lines of the stanza, Holmes uses the building and sealing of a new chamber to represent the human life. As each year passes by, one cannot turn back to undo or redo what he/she has done.

In fourth stanza, Holmes alludes once again to Greek and Roman mythology, in order to illustrate the significance of the chambered nautilus in discovering the meaning of life. Holmes uses Triton, Neptunes son, as an allusion to Greek and Roman mythology. According to mythology, Triton only rose out of the sea to blow his horn, which in wreathed or twisted just like the chambered nautilus. In the same way that Tritons horn shows the magic or mystery for which sailors pray for during a bad storm at sea, the nautilus wreathed shell, as Holmes says, can answer lifes mystery. Holmes ends the stanza saying that the answer to lifes big question is present, but it must be looked for and discovered using nature or in this case the chambered nautilus.

The fifth and final stanza contains the purpose or message of the poem. Holmes finally answers the main question: What is the purpose of life? He states that the purpose or goal in life is to grow and expand. Holmes encourages expansion and growth by saying, Build thee more stately mansions. He also says that the soul should not dwell on the past, instead it should plan and look forward to the future. The last five lines of the poem summarize the purpose and the ideal life cycle for human life. According to Holmes this ideal life cycle is divided into four main parts: growing out from a weak past (small chamber), creating new and better years (bigger chambers), continuing to create more precious years (even bigger chambers), and dying (leaving the shell on the beach).

Being a Renaissance poet, Holmes tries to discover and decipher the meaning of life. In his five-stanza poem Holmes uses Greek and Roman mythology, biological anatomy, famous legends, and deep pondering in nature, in order to unravel the mysteries of life. In addition, Holmes uses the chambered nautilus in a highly adept way to explain the meaning of life. Most importantly, though, is Holmes use of extended metaphor to convey one critically and important message: grow and do not go backwards.

“The Chambered Nautilus” by Oliver Wendell. (2016, Jul 18). Retrieved from https://studymoose.com/the-chambered-nautilus-by-oliver-wendell-essay 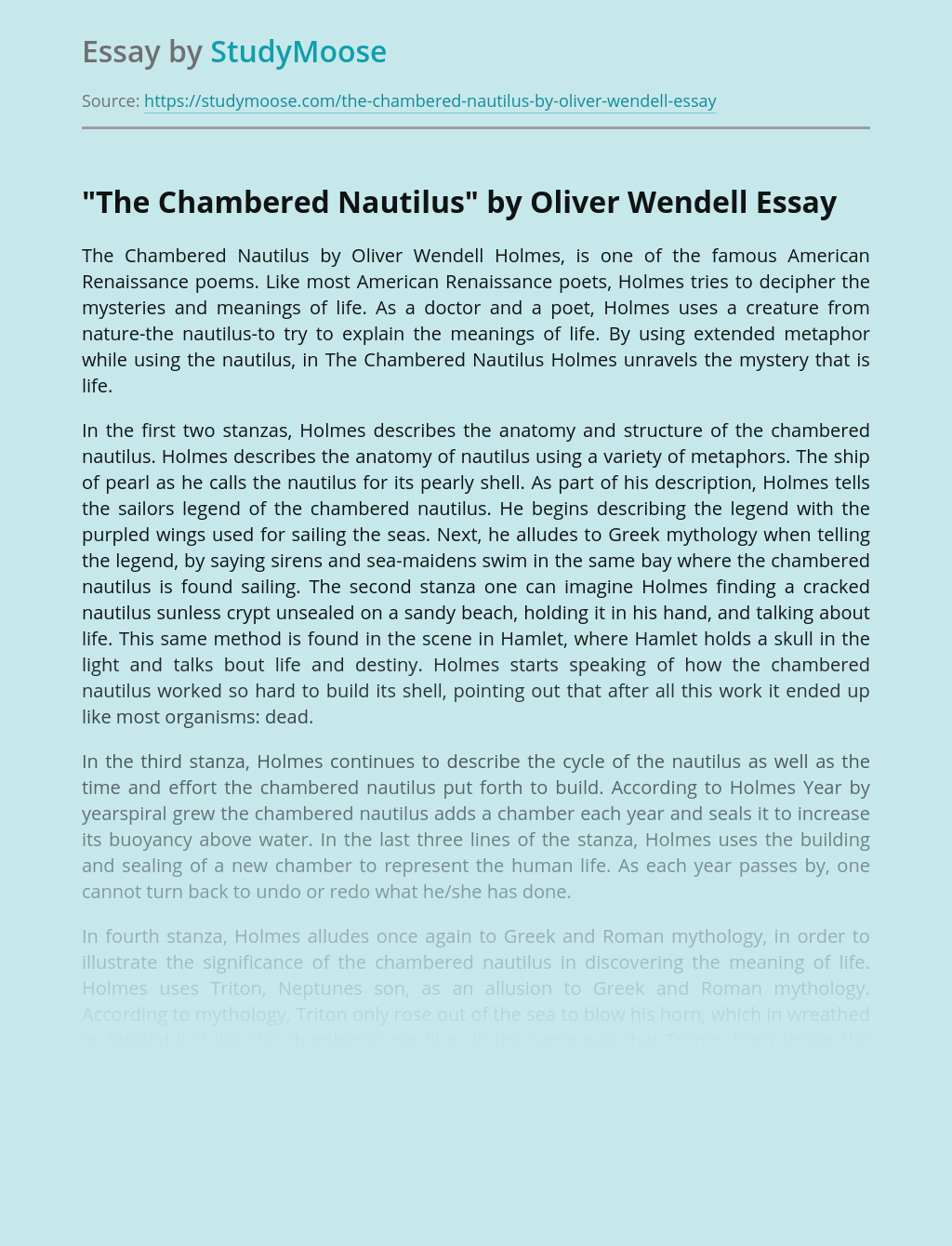 Probably the most underrated African American poet of his time, Countee Cullen is a really rebellious protester themed writer who is everything about securing the rights and self-respect of black individuals and utilizes that extremely passion to fuel his poetry. In the poem “Occurrence”, Cullen uses a mixture of rhetorical devices which he incorporates into...

Brief Analysis of a Poem Anahorish

A poem from Wintering out (1972) still early days in the “troubles” Anahorish is a place in south Derry, just a few kilometres south of Heaneys family farm. In gaelic it translates roughly to “hill of spring water” My “place of clear water,” The first hill in the world. This suggests that, literally Anahorish was...

Get Essay
What part does nature play in 'Lyrical Ballads'?

Nature and the Romantics have a close, intertwining relationship. In the Preface to Lyrical Ballads, Wordsworth writes, “the passions of men are incorporated with the beautiful and permanent forms of nature”, that “the mind of man [acts as] the mirror of the fairest and most interesting qualities of nature” and this reflects his feelings on...

On my visit to Bar13 I was instructed to watch a poetry slam. I have never experience such a vivid art of performing poetry. The only way I had experienced poetry before was by reading it from books. This has change the way I see poetry now. The poetry slam is a very competitive event...

The first person narrative poem ‘Father and child’ by Gwen Harwood, is structured in two sections each with seven stanzas and six lines. It focuses on an individuals revolt against authority and the consequences of such an action, as well as an insinuation of the imminent death of a parent. Harwood uses persuasive and implicit...