Panic Attacks are a form of Anxiety characterized by unexpected and repeated episodes of intense fear accompanied by physical symptoms. B. Panic Attack disorder affects about 6 million American adults and is twice as common in women as men. (Huppert) C. Panic Attacks often begin in late adolescence or early adulthood, but not everyone who experiences panic attacks will develop panic disorder.

A. Panic Attacks can occur at any time, even while sleeping. B. I would like to discuss this disabling condition and how most people go undiagnosed and untreated.

Don't use plagiarized sources.
Get Your Custom Essay on Panic Attack Signs & Symptoms Just from $13,9/Page

Many people have just one or two panic attacks in their lifetimes, and the problem goes away, perhaps when a stressful situation ends.

But if you’ve had recurrent, unexpected panic attacks and spent long periods in constant fear of another attack, you may have a condition called panic disorder. 2. Panic Disorder and Agoraphobia, in which people experience seemingly out-of-the-blue panic attacks. a. Sometimes they develop a fear of going into places where they have had previous panic attacks.

About one in three people with panic disorder develops agoraphobia. b. They stick to places they consider safe, and avoid public places (such as malls, trains, and stadiums) where escape may be difficult. c. Some people develop a fixed route or territory, and it may become impossible for them to travel beyond their safety zones without suffering severe anxiety. (A.P.A.) B. Panic attacks were once dismissed as nerves or stress, but they’re now realized as a real medical condition. 1. Although can significantly affect your quality of life, treatment can be very effective.

A person with panic disorder may become discouraged and feel ashamed because he or she cannot carry out normal routines like going to the grocery store or driving. Having panic disorder can also interfere with school or work.

They can strike at almost any time — when you’re driving the car, at the mall, sound asleep or in the middle of a business meeting.

Panic attacks have many variations, but symptoms usually peak within 10 minutes. You may feel fatigued and worn out after a panic attack subsides. a. Panic attacks typically include a few or many of these symptoms: Sense of impending doom or danger, fear of loss of control or death, rapid heart rate, sweating, trembling, shortness of breath, hyperventilation, chills, hot flashes, nausea, abdominal cramping, chest pain, headache, dizziness, faintness, tightness in your throat, and trouble swallowing. b. One of the worst things about panic attacks is the intense fear that you’ll have another one. You may fear having a panic attack so much that you avoid situations where they may occur. You may even feel unable to leave your home (agoraphobia) because no place feels safe. (Iacoviello)

When to see a doctor

A. If you have any panic attack symptoms, seek medical help as soon as possible.

1. Panic attacks are hard to manage on your own, and they may get worse without treatment.
2. And because panic attack symptoms can also resemble other serious health problems, such as a heart attack, it’s important to get evaluated by your health care provider if you aren’t sure what’s causing your symptoms.

B. Early treatment can often prevent agoraphobia, but people with panic disorder may sometimes go from doctor to doctor for years and visit the emergency room repeatedly before someone correctly diagnoses their condition.

1. This is unfortunate, because panic disorder is one of the most treatable of all the anxiety disorders, responding in most cases to certain kinds of medication or certain kinds of cognitive psychotherapy, which help change thinking patterns that lead to fear and anxiety. (Ebell)
2. First, talk to your doctor about your symptoms. Your doctor should do an exam to make sure that another physical problem isn’t causing the symptoms. The doctor may refer you to a mental health specialist.

A. It’s not known what causes panic attacks or panic disorder, but these factors may play a role:

1. Genetics.
2. Major stress.
3. Temperament that is more susceptible to stress.
4. Certain changes in the way parts of your brain function.

B. Some research suggests that your body’s natural fight-or-flight response to danger is involved in panic attacks.

1. For example, if a grizzly bear came after you, your body would react instinctively. Your heart rate and breathing would speed up as your body prepared itself for a life-threatening situation.

2. Many of the same reactions occur in a panic attack. But it’s not known why a panic attack occurs when there’s no obvious danger present.

A. Symptoms of panic disorder often start in the late teens or early adulthood and affect more women than men. B. Factors that may increase the risk of developing panic attacks or panic disorder include:

1. Family history of panic attacks or panic disorder.
2. Significant stress.
3. Death or serious illness of a loved one.
4. Major changes in your life, such as the addition of a baby.
5. History of childhood physical or sexual abuse.
6. Experiencing a traumatic event, such as an accident or sexual assault. (A.P.A) VII. Treatment.

A. Psychotherapy, also called talk or behavior therapy, is considered an effective first choice treatment for panic attacks and panic disorder.
1. Psychotherapy can help you understand panic attacks and panic disorder and learn how to cope with them.
2. Cognitive behavioral therapy can help you learn through your own experience that panic symptoms are not dangerous. a. During therapy sessions, your therapist will help you gradually re-create the symptoms of a panic attack in a safe, supportive setting. b. Once the physical sensations of panic no longer seem threatening, the attacks begin to resolve. c. Successful treatment can also help you overcome fears of situations that you’ve been avoiding because of panic attacks. B. Medications (US DH&HS)

A. There’s no sure way to prevent panic attacks or panic disorder. However, these recommendations may help. B. Get treatment for panic attacks as soon as possible to help stop them from getting worse or becoming more frequent. C. Stick with your treatment plan to help prevent relapses or worsening of panic attack symptoms. D. Get regular physical activity, which may play a role in protecting against anxiety.

A. Panic Attacks are very real and can happen to anyone at any given time. B. Be aware of yourself and everyone around you; never know when a panic attack can occur. Any Questions? 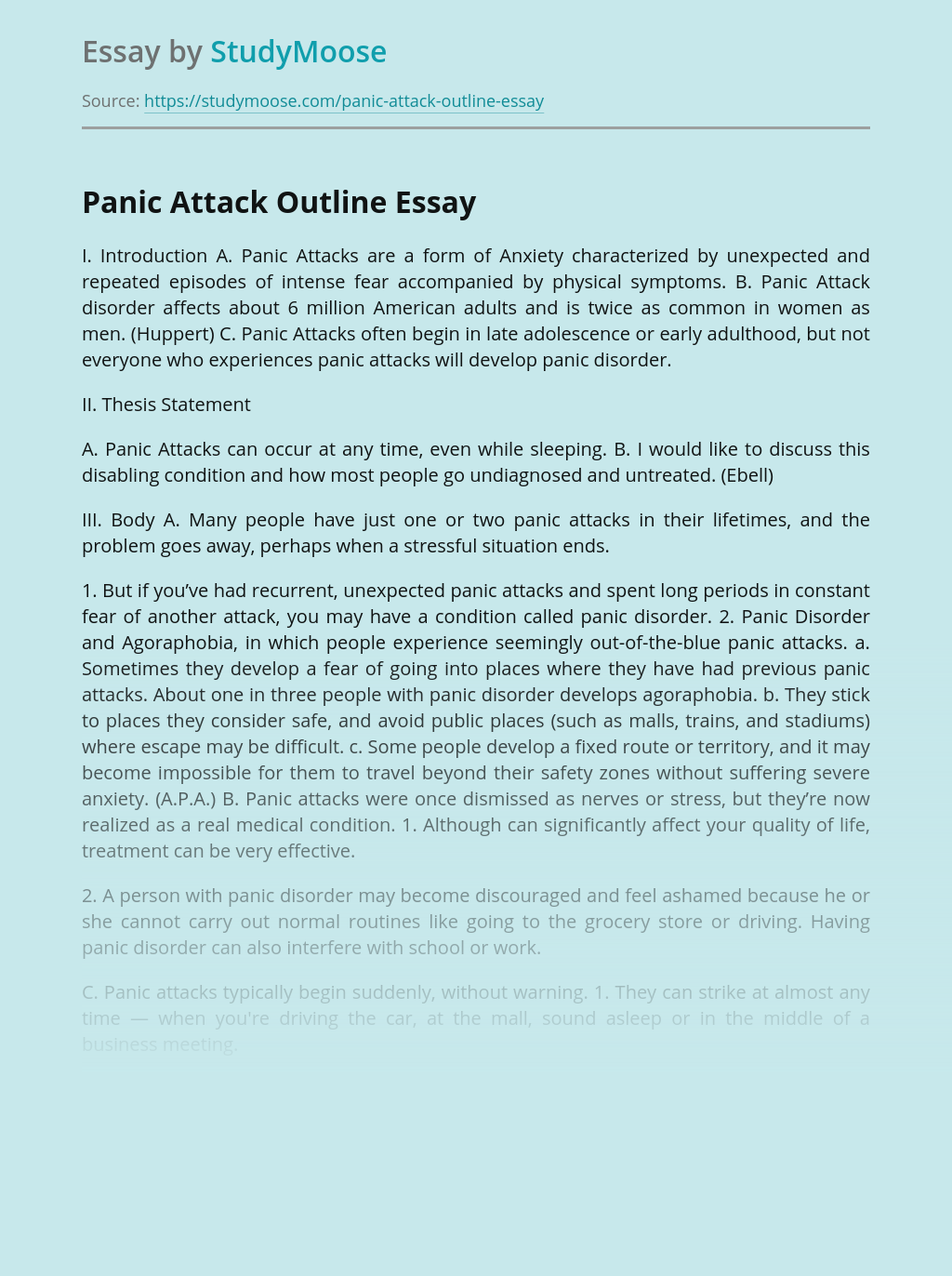 The Story of an Hour by Kate Chopin is a short yet complex story, describing Mrs Mallard’s feelings. It focuses on the unfolding emotional state of Mrs Mallard after the news of her husbands death, and has overflowing symbolism and imagery. It is an impressive literary piece that touches the readers’ feelings and mind and...

I could barely grasp the note cards in my hands while 30 sets of eyes were glued on me. Preparing to do the unthinkable – speak in front of a crowd of judgmental peers – I constantly doubted myself, bringing my self-confidence down to its all-time low in a matter of seconds. As nine years...

Get Essay
The Long Drive: Will You Re-Up Next Year?

A cow town is simply a town in which cattle were taken to put on railroads. The only problem is, these towns are located in Kansas, about 1000 miles from Texas, a trip that usually takes up to 3 months. Because of this and water worries, low pay, and lack of sleep, I, along with...

Conflicts Between Young And Old