There is a quiet war currently going on in this country every day. It is affecting our children’s mental health and welfare. This is a cyber war that takes advantage of children who have low self-esteem, are not well supervised, lonely and naïve and use the internet. We used to be afraid that our children could be lured away by strangers. The term “stranger danger “was the person who tempted our children with candy and puppies in order to steal them from us.

Don't use plagiarized sources. Get your custom essay on
“ Internet Cyber Attacks on Children ”
Get custom paper
NEW! smart matching with writer

Now we live in an age of the online predator. This person uses a false persona online that psychologically manipulates innocent children. They “groom” the child by building up trust and confidence slowly with them. This paper will explore the victims of the internet predator, the “grooming” process online predators use, deadly consequences of online relationships with sexual predators and some solutions that might help parents to protect their children.

Experts believe tens of thousands of children globally are sexually exploited online, and the number appears to be growing.

The victims may be boys or girls, ranging from very young children to adolescents, and hailing from all ethnic and socio-economic backgrounds (“Sexual Online Exploitation of Children,” 2017).

Younger children have much less interest than teens in interacting with and going to meet unknown persons they have encountered online. In 2012, the European Online Grooming Research Project found that “girls seem to be at greater risk than boys” (“Online Grooming of Children,” 2017). Mobile devices also provide new and evolving means by which offenders sexually abuse children as apps are being used to target, recruit, and force children to engage in sexual activity (“Sexual Online Exploitation of Children,” 2017). An offender gains access to a potential child victim and, through psychological manipulation and coercion then grooms the child for sexual exploitation. Some studies show that children who have experienced negative life events or maltreatment may be more vulnerable to online grooming (“Online Grooming of Children,” 2017). Research suggests that one quarter of victims of online offenders are boys. Frequently these are boys with sexual orientation issues who get into trouble while looking online for help and understanding they can’t get at home or at school. Breck Bednar, a 14-year-old boy who loved gaming, was groomed online and murdered in 2014. The murderer, Lewis Daynes had a difficult upbringing. His parents had divorced, his mother had left the country, and he’d lived a short time with his grandmother. He was 18 years old, unemployed, living alone in an apartment where he bought server space and used it to game with teenage boys (Moore, 2016).

Breck’s parents were suspicious of this online relationship so they confiscated their son’s computer, so he could no longer have contact with Daynes. On Sunday, the 16th of February 2014, Breck took a taxi ride to Lewis Daynes’ home where he was stabbed to death. His mother Lorin said,” My heart breaks to think how scared he must have been to be tied up and gagged and stabbed by someone he trusted so much” (Moore, 2016). Daynes was sentenced to life in prison. In 2016, a 13-Year-Old girl Nicole Madison Lovell met her murderer on a Site her Mom “Never Even Heard Of” (Rapson, 2016). Police have arrested an 18-year-old Virginia Tech freshman, David Eisenhauer an elite athlete for her murder. He killed her to ensure no one discovered their underage relationship. It is alleged that Nicole met David online, on Kik, an anonymous messaging app (Rapson, 2016) .

Since the late 1990s, when youth internet use became widespread stories about “online predators” who use the Internet to gain access to young victims have become a major topic of news reports. The widespread popularity of the 2007 television shows “To Catch a Predator” with Chris Hansen has shown the public’s fascination with online child molesters. The media has been quick to characterize such men as internet or online predators and pedophiles (Wolak, Finkelhor, Mitchell, & Ybarra, 2008). Although there is little research specifically about online child molesters, there are indications that these people are not pedophiles and violent or sadistic offenders. Some research shows that those online child molesters who have solicited undercover investigators were somewhat older and more middle class in income and employment. They were also somewhat less likely to have prior arrests for sexual offenses against minors or to have histories of violence or deviant sexual behavior (Wolak, et al., 2008). A recent case in October 2018 resulted in the arrest of thirteen men, in an undercover online child predator operation in Florida. During the six-day “Operation Cyber Guardian Fall Haul,” these thirteen men communicated with undercover detectives thinking they were children between the ages 13 and 14 and showed up to a Polk County location to solicit sexual acts from the “children” (“13 men, including Disney resort worker,” 2018). Those arrested included men in their 20’s, 30’s and 50’s Among them were: a man who said he knew he was HIV positive and solicited a boy who he thought was fourteen years old to engage in unprotected sex, a former military police officer who had been previously arrested, convicted and was on federal probation for lewd/lascivious molestation of a child, a Lake Mary man who was arrested in November 2017 for obscene communication with a minor and a man who brought a new I-Phone 8 plus as a gift along with sex toys, condoms, lubricant, and male enhancement pills (“13 men, including Disney resort worker,” 2018).

Online offenders use Internet communications such as instant messages, e-mail, and chatrooms to meet and develop intimate relationships with victims. An online survey of a representative sample of over 1,500 youth Internet users conducted in 2006 found that youths were more likely to receive online sexual solicitations via instant messages or in chatrooms than through social networking sites (Wolak, et al., 2008). There is some evidence that adolescents who visit chatrooms and engage in risky behavior are more likely to be lonely, depressed, have problems with their parents, and may have histories of sexual abuse. Kids who are lonely, shy, or lacking in social skills may interact with others in chatrooms to make up for problems they have making friends offline. Offenders often use social networking to create a persona and, in some cases, to hide their true age and identity. In doing so, they are better able to connect with children and more easily gain their trust and cooperation, ultimately introducing a sexual element into the relationship (“Online Grooming of Children,” 2017). In the great majority of cases, victims are aware they are conversing online with adults. In the National Offender Online Victimization (N-JOV) study, 73% of victims who had face-to-face sexual encounters with offenders did so more than once (Wolak, et al., 2008). When deception does occur, it often involves promises of love, romance and adventure by offenders whose motives are primarily sexual. A case involving a man in Florida posing as a 15-year-old came to the attention of the Federal Bureau of Investigation (FBI). The FBI said that Lucus Michael Chansler targeted 350 minors in the US, Canada and Britain (Buncombe, 2017). Court documents show that Chansler, originally from St John’s, Florida, made online threats to hundreds of teenage girls with the intention of forcing them to provide him with photographs either exposing themselves or engaging in sexually explicit behavior (Buncombe, 2015). In 2015, Chansler was convicted of being involved in” Sextortion” and jailed for more than 100 years.

Research says that talking about sex online with strangers is a big risk factor for encountering problems. Other things that probably increase risk are giving out very personal or sexually oriented information, looking for romantic relationships online, and inviting contact from lots of people (“Internet Safety Education”, n.d.). There is also research suggesting that the most vulnerable youth are ones who are having conflicts with their parents. So, parents need to reach teenagers directly with messages that are credible. This means not talking down to them and trying to get familiar with their culture. Parents must acknowledge their teen’s familiarity with the internet and respect their appropriate eagerness for independence and developing new relationships (“Internet Safety Education”, n.d.). Some teens think it might be fun, harmless or romantic, to meet an adult in person but it could get them into serious trouble. Younger children need to be aware that adults who talk to them online about sex are committing a crime (“Internet Safety Education”, n.d.). The best advice to children especially teens who are approached about meeting an online predator in person, is to report it to someone. Preferably they should tell their parents who should report it immediately to law enforcement.

The internet can be a scary place for children. There is no doubt that online predators are there in chat rooms ready to entice little boys and girls into sexual situations. As parents you need to be vigilant. The police are heavily involved in using their online technology to try to catch sexual predators who prey on young people. Television shows have shown the sexual predators that are out there. They are not the boogey man, they are men you see on the streets; they are your chaplain, teacher, and fast food worker. This paper showed a couple of cases, where a teenage boy and girl were murder victims of online predators. This is not a frequent event since this only happens in 5% of murders. However, one murder is too many. Fixing this problem is not easy as long as we have secretive chat rooms and kids who do not see the danger over the internet. Awareness and parental guidance are apparently some things that can be done to curb this problem. Children need to report improper behavior over the internet to their parents and police. It is the fastest and best way to catch these offenders and save our children from getting into dangerous situations. 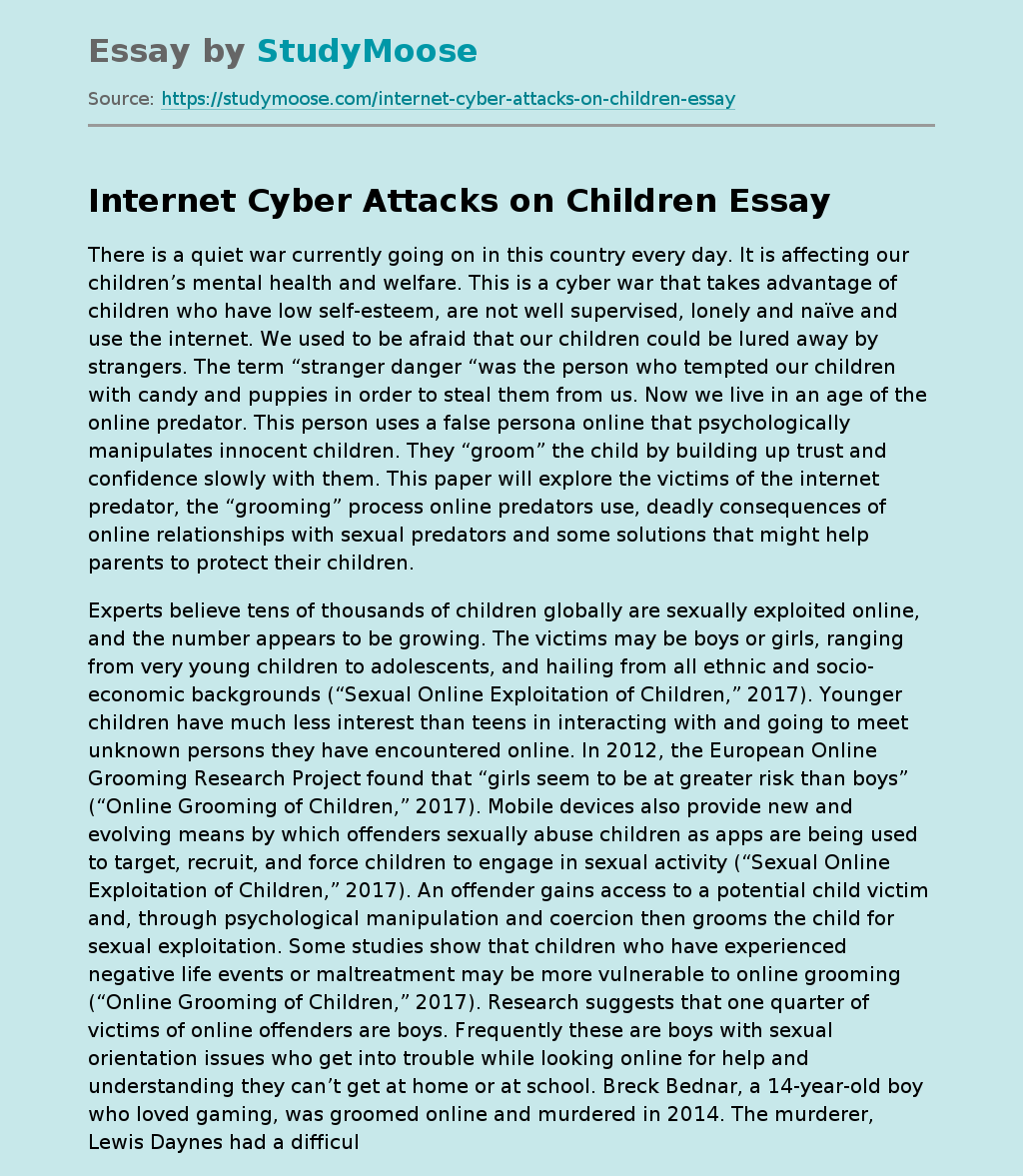