The proliferation of the use of internet technology for some time now has seen the growth of crimes that are committed over the net which is also referred to as the cyberspace. These crimes are referred to as cyber-crime. Basically cyber-crime is part of electronic crime and it is a criminal activity that is executed through computer network (Balkin, 2007). Traditionally the term espouses such crimes as fraud, theft, forgery, blackmail, and other illicit activities that are done over the network.

However as the use of computer networks have increased and more types of computer crimes have come up and the definition of the crimes has also become expounded.

Don't use plagiarized sources. Get your custom essay on
“ Essay about Cyber Crime ”
Get custom paper
NEW! smart matching with writer

The web is a worldwide thing in which materials are posted and accessed from all corners of the world. This worldwide coverage of the net gives rise to a diversity of information that is found in the net and it follows that cyber-crimes are a worldwide crimes. The nature of the differences in cultures in the world for example give rise to a need make sure the net is an objective platform of information dissemination, be it religious, social, or political material.

The growth of business over the internet; e-business has also brought in another type of cyber crime whereby people may defraud potential customers of their money by advertising goods, services or even jobs that are non existent. Other types of cyber crimes exist, and they shall be looked at in the following discussion. According to the USA’s Department of Justice, there have been very many cases of cyber-crime that are reported annually.

This made the US government to join hands with the European council’s Convention against Cyber crime in 2006.

Types of cyber-crimes The crimes that are common in the cyber are fraud. Fraud is a dishonest misrepresentation of facts that is intended to cause loss for somebody else and benefit the fraud doer. This includes changing inputs in internet in unauthorized manner, altering or deleting data that is already stored in the net, altering existing system tools, manipulating bank systems so as to make unauthorized access to bank ATM’s (Shinder, 2002). Offensive content is another form of cyber crime. Harmful contents of websites are considered as cases of cyber crime.

Also distasteful or offensive the information carried in a cyber sites is not allowed. All materials that have the potential of inciting hate crimes in societies, materials that encourage political rebellion, or blasphemous material are not allowed also as they are basically offensive in significant manner. If these kinds of materials are found posted on the web their owners are accused of cyber crime. The reason for the restriction of these materials is that they lead to hostilities based on faith, race, etc that the modern world does not have a place for. Harassment is another type of crime that occurs over the net.

It includes the circulation of derogatory comments, and obscenities that are directed at certain individuals that are based on their aspects of gender, religion, race, sexual orientation or national identity. This is mainly done through news groups, e mails with hate messages, and chat rooms. Another crime that is supported by the net is drug trafficking. Drug trafficking is done through the net in that the illegal substance sellers use encrypted e-mail and other available internet technologies. The substances themselves are delivered to the buyer after they make payments.

This crime leads to more sales for the drug sellers since the trade is restricted in most countries and the intimidated users of the drugs resort to this option as a save haven. Cyber terrorism is another kind of cyber crime. This crime is the coercion or intimidation of organizations or the government to advance a certain persons political or social goals. This is done by launching attacks on their computer networks, and the information stored there using computer. This vice can be defined as an act of terrorism that is committed via the use of computer resources or cyberspace.

It ranges from simple propaganda to the use of the internet to commit a serious terrorist attack (Blane, 2003). Hacking activities are classified as acts of cyber terrorism. This activity is the attacking of websites of families, individuals, and groups within a network, in order to collect information that is useful for criminal activities such as blackmailing, robberies, or ruining the activities of the web owners. A Canada case in 2000, which involved a Mafia boy who had committed 54 counts of illegal access to computers, is a classical case of cyber crime.

The defendant also faced ten counts for mischievous data attacks on dell computer, yahoo, among other companies’ websites. There are many let downs in the fight against cyber crime. Many countries around the world lack systems and laws that are aimed at combating the crime. In extreme cases there are nations that condone or encourage some cyber crimes. In many of the countries the burden of fighting cyber-crime is left to corporations that are affected in one way or the other by the vice. Some of the countries have laws against the crime but the law is not implemented while others have proposals for the law but they have not made the law.

Nigeria here serves as an example of such a country which has a good plan for fighting the crime only that the proposals have not been made into law. The bill addressing the crime is in the national assembly waiting to be discussed. If the bill were passed, cyber criminals would be prosecuted and duly punished. This go slow attitude is seen in many countries that don’t seem to realize the danger that cyber-crimes pose to the victims. In any case government agencies like the police force, and crime investigation departments are among the leading victims of cyber crimes.

Also politicians get lots of cyberspace blackmail and hence they should be in the forefront of finding a solution to the problem. Again cyberspace crimes are an image destroying affair. For instance a cyber-criminal operating from a country A to injure a victim in country B destroys the overall image of their country and this may translate to less trust for his country in the eyes of other countries. The result of this may be economical loss of for the country that hosts the cyber-criminals as web based companies refrain from investing in the country (Yar, 2006).

Protections against cyber-crimes The enactment of laws against cyber crime by the governments has been a move in the right direction. In US there are such laws as; Computer Abuse and Fraud Act that address issues of fraud that is related to computers, SPAM act that is intended to at controlling assaults of non solicited pornography. Other laws address extortion threats, identity theft, wire fraud, electronic communications privacy, and secrets of trade (Thomas, 2000). Legal frameworks that address each emergent form of cyber-crime should be made.

The laws that are made should be implemented and avoid the situations from the past where some of the laws have not been put into practice. There should be cooperation with among the stakeholders concerned in the cyber-crime inclusive of all operators and technical solution providers in the sector. Such cooperation is a fast way to eliminating cyber criminals as their life in the community will be made difficult. The operators of cybercafes should not involve themselves with people who abuse the internet and commit the crimes. Public awareness on the crimes should be instituted.

This campaign should inform the public about the dangers involved in the crimes. Awareness about cyber-crime should be created among members of the society so as to cut the number of cases that are likely to occur if the people are not aware. The structure of the Europe’s convention against cyber-crime is that nations who become signatories of it harmonize their national laws, improve their investigative capacity on the matter and cooperate with other nations in the fight against the crimes. If this convention is adopted internationally it is able to stop the problem to a great extent.

This is due to the trans-border nature of the problem. Since the net is used and violated worldwide then a workable solution to the problem should be worldwide. If the convention is not adopted in all countries, and cyber-criminals continue to operate freely there still will be effects on those countries that have ratified the convention (Shinder, 2002). On top of all this, victims of cyber-crimes should report the cases to the authorities for actions to be taken. Cyber criminals should be named and shamed so that they may cease from the practice. Conclusion

Cyber crimes are very prevalent in today’s world and all actions that is required should be done to curb them. The current actions taken against the crimes are not enough and more should be done to address the problem as it posses a grave danger to the entire population of the world as it has the potential to influence political, social and economical wellbeing of communities, individuals and institutions. Protection of the self’s interest can only be guaranteed through the concerted efforts of all stakeholders and nations in fighting the crime. References 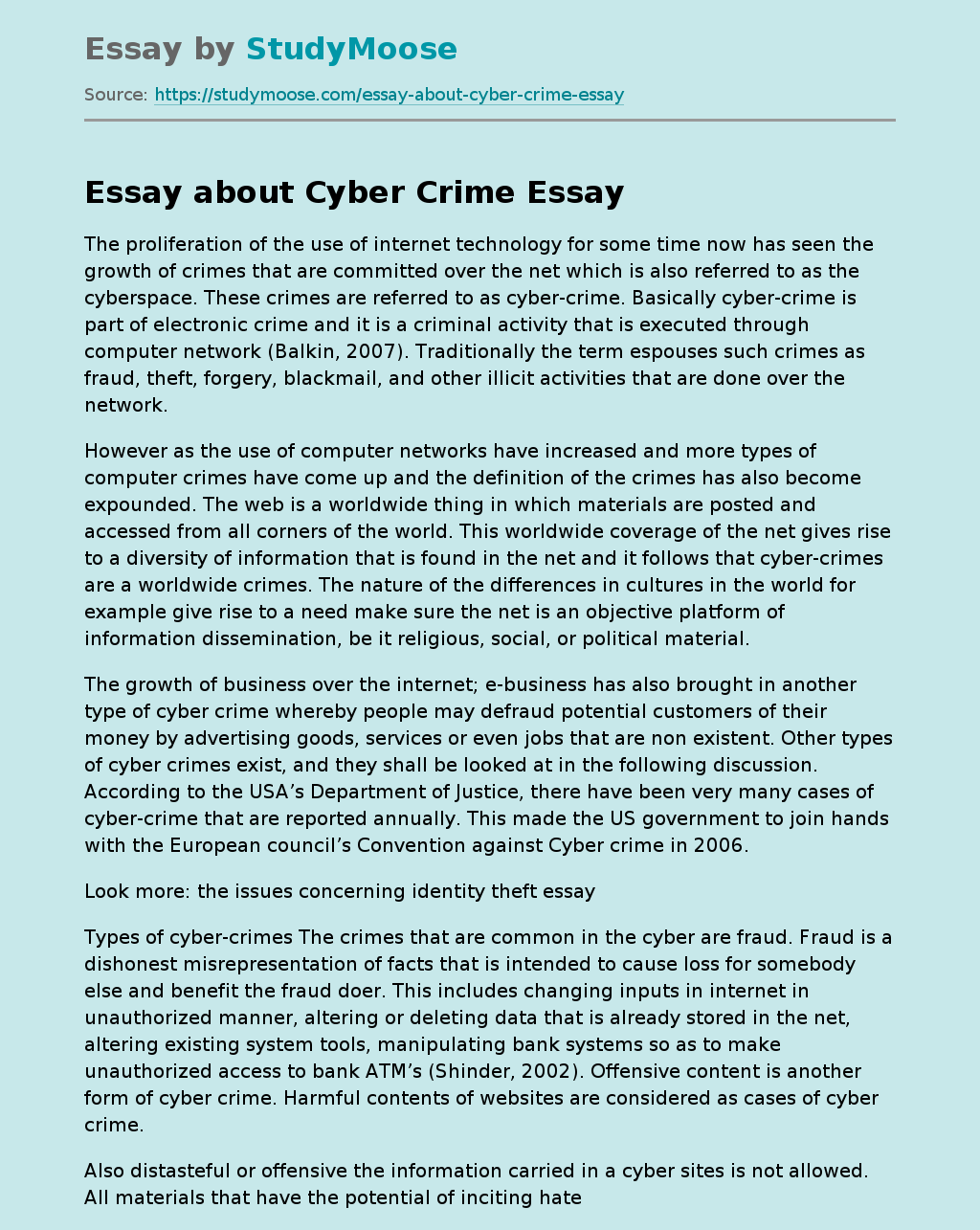