The Effects and Consequences of Cyber-bullying

Don't use plagiarized sources. Get your custom essay on
“ The Effects and Consequences of Cyber-bullying ”
Get custom paper
NEW! smart matching with writer

The Effects and Consequences of Cyber-bullying

Bullying has been around for a very long time. Over the last few decades, it has taken a new form over the Internet and social media and is referred to as cyber-bullying. Lately, cyber-bullying has become the focus and topic of research. This paper will focus on cyber-bullying and the severe legal consequences that have come about due to the severity of the new way to bully an individual.

Proficient in: Cause And Effect Of Bullying

This paper will discuss the various aspects of cyber-bullying and the effects that it has had on individuals, including suicides and the different legal consequences that have been written into the federal law due to the high rise within the cyber-bullying will also be discussed Cyber-bullying has become an epidemic and is detrimental to the health of this nation’s youth.

It could be asked what is bullying exactly; even though it is an easy question to ask, it is not an easy question to answer. Simply because “this question is not helped by the fact that sociological researchers do not even agree on the definition of face-to-face bullying” (Butler, Kift, & Campbell, 2009).

On the other hand, cyber-bullying is easy to define. However, one of the biggest problems about cyber-bullying is that most people either don’t know what it is or what it consists of. Cyber-bullying has been defined as “any behavior performed through electronic or digital media by individuals or groups that repeatedly communicate hostile or aggressive messages intended to inflict harm or discomfort on others” (Akar, 2017). There are several various categories or activities that are considered to be cyber-bullying; Del Siegle (2010) defines them as:

The biggest difference between face-to-face bullying and cyber-bullying is that with face to face no one will likely remember what happened. Unfortunately, with cyber-bullying, like anything else on the internet, once it is out there it is out there for the world to see, and people can never really get rid of it.

Some people might think that a person is pulling a joke. They might think that what they wrote or shown is not a big deal, or that it doesn’t happen all that often. However, ” more than 1 out of 5 students report being bullied, according to the National Center for Educational Statistics” (DeNisco, 2018). Another example is that “Prevalent rates for victims of cyber-bullying (cyber victims) range anywhere from 4 percent to 72 percent, while the prevalence rates for cyberbullies range from 4 percent to 20 percent” (Gorzig, 2016).  Like other crimes that take power away from individuals, those are only the cases that are reported. For example, “The Cyber-bullying Research Center indicates that 50% of teenagers have been cyber-bullied at some point, and 20% are regularly cyber-bullied” (Waggoner, 2016). To most, it would be considered that it happens too often.

Causes and after effects of Cyber-bullying

The causes of cyber-bullying are not always that clear. For some, it is attention, power, and for others, mostly girls, it’s relationship issues (Lotrean, Ailoaiei, & Stan, 2016). For most, more than likely, it’s for power of some kind. Unfortunately, no one really knows the exact reasons why people become a cyber-bully, maybe it is for the same reasons people become regular bullies. All that is known for certain are the after effects of being cyber-bullied. It has been proven that cyber-bullying and bullying have had a negative effect on child’s life in general and that “both traditional and cyber-bullying among adolescents is considered a major health concern” (Gorzig, 2016). “Cyberbullying could lead negative emotions, depression, loneliness, suicidal tendency, decrease in academic achievement, isolation, anxiety and lowered self-esteem sexual harassment and even death threats” (Akar, 2017).  It is also known from past experiences that bullying can lead to shootings; it’s just a matter of time before it happens because of cyber-bullying. It is not funny when someone is being bullied through social media. There have been many suicides due to cyber-bullying, and sadly nothing was done about it because our legal system at the time hadn’t caught up to the technology and unfortunately still is not quite there yet: “In many respects the law has struggled to keep apace with advances in technology. The problem of cyberbullying is no different” (Butler, Kift, & Campbell, 2009)

People get away with cyber-bullying because the teachers and administrators at the school are more afraid of a lawsuit than wanting to protect their charges. “School administrators, however, have been reluctant to get involved in cyber-bullying incidents, fearing civil litigation over regulating speech or behaviors that are protected by the First Amendment“ (Stewart & Fritsch, 2011). To make the matter worse// even if they do want to act, they do not know when they have the authority to intervene (Stewart & Fritsch, 2011).

Consequences. Unfortunately, there are no actual federal laws for cyber-bullying; however, some of what is defined as cyber-bullying does overlap with other federal laws. Also, there has been some progress in fighting cyber-bullying. For instance, some states have implemented an online reporting system for cyber-bullying (DeNisco, 2018).  And in 2008 California passed a law giving school administrators authority to discipline online bullies, later this law became known as Seth’s Law, which was signed by the governor in 2011 (Stewart & Fritsch, 2011); also “In 2012, the law was expanded to require schools to investigate student complaints about online bullying, even if the bullying occurs are off campus. Additionally, there could be disciplinary action taken if the cyber attack created an on-campus disruption” (Waggoner, 2016).  And “In October 2013, Governor Jerry Brown of California signed legislation that allows educators to suspend or expel cyberbullies, even if the harassment had nothing to do with school and occurred off of the school grounds” (Waggoner, 2016).

Other states have taken have acted as well “According to the National Conference of State Legislatures (2009), 47 states have enacted laws that explicitly address electronic forms of harassment and stalking” (Stewart & Fritsch, 2011). By doing so some of these actions overlap and become a federal case instead of a state/local case.

There is not much that can be done to prevent cyber-bullying. The best thing that can be done is to educate children, parents and school personnel on what cyber-bullying is and what the warning signs are. Which unfortunately could also mean that they are bored, or a just a typical adolescent/teenager. The best thing to prevent it is open communication, open to both teachers and parents. Not just before but during as well as after so the situation does not escalate and become something much worse, such as a suicide or a mass shooting. As a deterrent, the lawmakers also need to pass and expand federal and state laws to combat cyber-bullying. Also, if someone is found guilty of cyber-bullying it should be a felony, not a misdemeanor. However, like all laws and punishment of those laws, the person’s state of mind and cognitive ability must be taken into consideration. That is because if the person who is doing the bullying does not understand what they did wrong then how will it stop.

At the pace that technology is advancing it is going to be a while before the law will be able to catch up. What this means is that until technology’s rate of advancement slows down it is going to be society’s responsibility to change this direction of thought. Within society, it will fall mainly to the teachers and the parents to educate the future generations, that this way of thinking is not appropriate and if something like this is happening they need to tell someone, so it can be addressed. But it should not just fall on to them, like the old saying it takes a village to raise a child. The other reason that it will fall mainly two these two groups, as they have the most control over the adolescents for most of the time. At home, a parent should know what their child is looking at or do on the internet. Parents should also know who their children are talking to and what they are doing on their phones. Teachers and school personnel might not know about their phone however they should know about the internet usage and have certain block or programs to set off red flags if any cyber-bullying behavior is perpetrated from one of their machines.

The Effects and Consequences of Cyber-bullying. (2021, Apr 20). Retrieved from https://studymoose.com/the-effects-and-consequences-of-cyber-bullying-essay 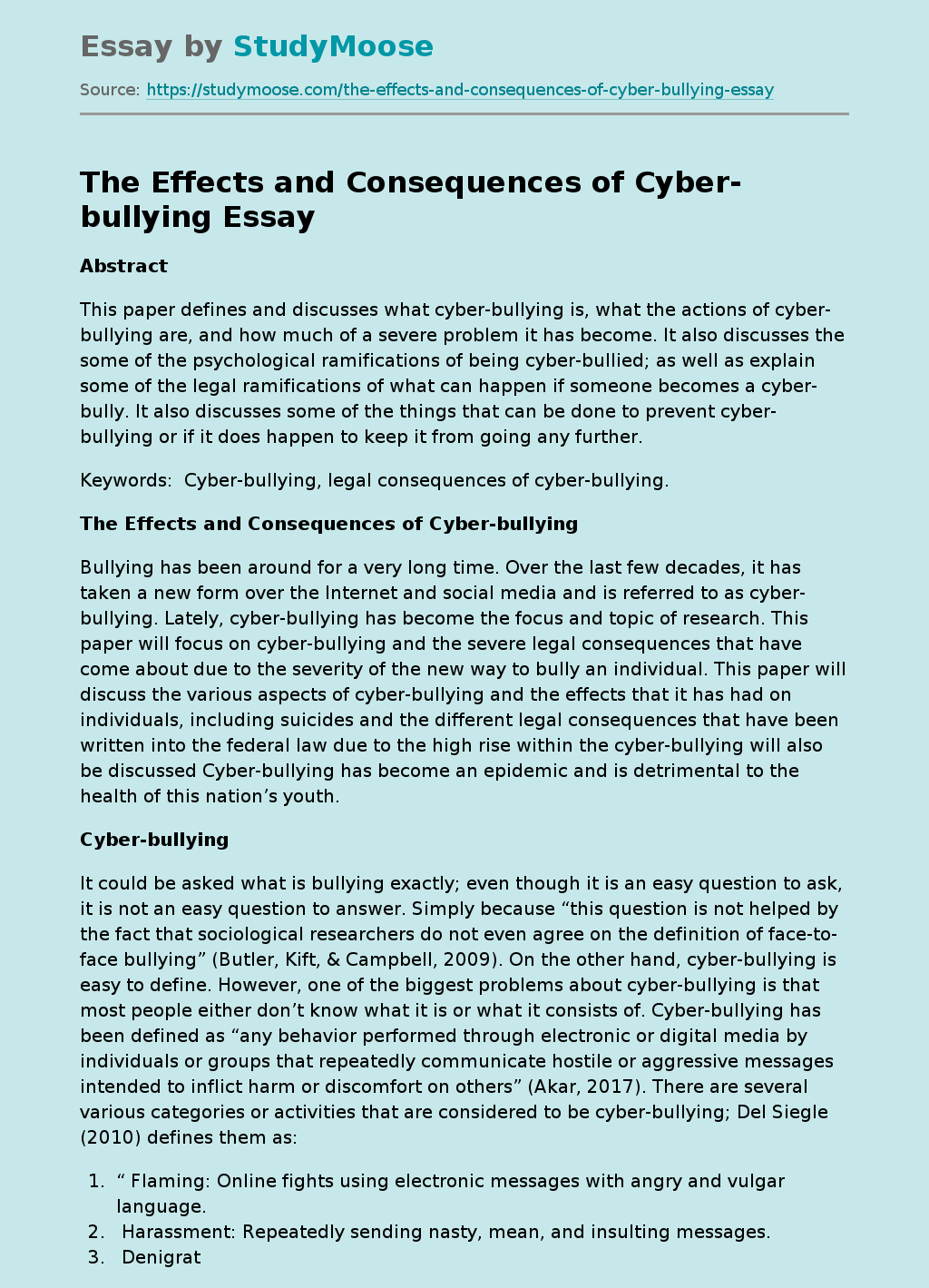