The Psychological Effects of Bullying

Categories: Cause And Effect Of BullyingRite Of Passages
Download
Essay, Pages 6 (1264 words)
Views
963

Abstract
Bullying has become a high profile issue faced by many people, on a day to day basis. Most Americans believe that, a little teasing and bullying at school is just a childhood rite of passage. What they don’t know is that, there are long lasting, ramifications for victims, as well as for bullies; according to the 2009 issue of the Harvard Mental Health Center (Harvard University, 2009). Bullied children may acquire debilitating mental illnesses such as, depression, anxiety, eating disorders, body dysmorphic disorder, and in more serious cases suicidal tendencies.

Chronic childhood bullying victims are at higher risks of suicide. “Bullying magnifies these genetic and environmental predisposing risk factors” (Veskler, 2011). A new wave of research shows that in fact, bullying can leave a negative, permanent imprint on a child’s brain, while still in its formative years. These neurological scars of a bullied victim closely resemble those of a physically or sexually abused child. Revealing these psychological long-term effects, has given the ability to precast bullying not just as a “rite of passage, but a serious form of childhood trauma” (Anthes, 2010).

What is bullying?
Bullying is unwarranted, intentional, aggressive behavior towards others (Anthes, 2010). It can happen in the form of physical (violent), verbal (name calling), intimidation (threatening), and even cybernetically (internet). Physical bullying includes body contact between the bully and their “target” (Anthes, 2010). It is the most lethal and threatening, because of the possibility of immediate injury or even death. As with any other form of bullying, emotions and mental health can be permanently damaged.

A surge of suicides and eating disorders has emerged evidence on the effects of mental health and self- image. Verbal bullying is when the bully uses theirs words to bring others down, by making fun of or teasing the victim. For instance, a verbal bully may make fun of a peer for having freckles, wearing glasses, or even a disability. The verbal bully relentlessly insults his or her victim. They are harder to identify than physical bullies, since the attacks usually tend to occur when others are not present. Intimidation is a form of verbal bullying, since the victim is being threatened and filled with fear, by the bully’s expressions of intent to hurt or punish. Cyber-bullying is broadly defined as “willful and repeated harm inflicted through the use of computers, cell phones, and other electronic devices” (Hinduja-Patchin, 2009). Most often it is done through the use of computers or cell phones. Although it does not involve physical contact between bully and victim, it is still psychologically and emotionally devastating. While bullies deny the negative impact name calling and teasing can do to others; researchers suggest that “as many as 8% of participants in one study acknowledged that, traditionally bullying has affected them to a point where they have attempted suicide, ran away, refused to go to school, or been chronically ill” (Hinduja-Patchin, 2009).

Who is the bully?
A bully is a person who is habitually and purposely cruel, especially to subjects who may be weaker, smaller, or just because they are different (EDC, 2007). “A study conducted by the Center for Adolescent Studies at Indiana University, of five hundred and fifty eight 6th to 8th graders offers some interesting insights” (Sharma, 1996). The findings about bullies suggest that, a bully’s behavior can be attributed to risk factors such as, fewer positive adult role models, being allowed to watch violent television at home. When disciplined at home, a more forceful, maybe violent approach is taken by the parents, and the also have fewer positive peers. The study showed that, “less than one third of the high-scale bullies lived with both of their natural parents. More than one third did not have both parents living under the same roof” (Sharma, 2009). Aside from the lack of a two parent upbringing, many children endure abuse. “Fifty percent of bullies come from an abusive environment. So in turn they hand out to others, what they personally receive” (Sharma, 2009). Some bullies are mean, but others are just trying to connect with others,

Who are the victims?
Victims are often described as loners, who lack self-defense skills (EDC, 2007). They tend to cry easily, and are unable to diffuse conflict with humor or think, quick on their feet. Another serious issue for victims is the lack of social connections. If at one point they do have friends, those friends often turn their back, to avoid becoming targeted themselves. Victims of bullying suffer a wide range of harmful effects, both immediately and for years to come. It is important for parents, to be able to recognize signs of physical, emotional and social distress in their children; such as, anxiety, tiredness, sadness, and refusal to go to school. They may also suffer higher levels of headaches, skin problem, abdominal pains, sleep disorders, bed wetting, and depression. What long effects does bullying have on the bully?

As strange, as it may sound, there are negative effects on the bullies themselves. Being a childhood bully increases risks of negative outcomes, such as, psychological distress, depression, and anxiety disorder. They are also more likely to abuse substances. “By their mid- 30’s, 60% of people who bullies in grades 6th through 9th, have at least 1 conviction” (Frazez Thill, 2012). Finally, childhood bullying seems to also have an impact on their adult life; such as commitment issues, domestic abuse toward their spouse of partner and their children. What are some long term effects for the victims?

The experience of being bullied can cause lasting, sometimes permanent damage. “It is not necessary to be physically harmed in order to suffer lasting harm” (Dombreck, 2012). Bullies evoke irreversible damage to their victims’ self-concepts; to their identities. Being a victim of bullying can damage the ability to view one’s self as a desirable, capable and efficient individual (Dombeck, 2012). Unfortunately, easy targets are the sensitive kids, who cry easily. But many of the victims can also become bullies. By being bullied they are taught that, sensitivity is a bad trait, so they learn to channel it into anger, hence, the bully has been bullied before. Conclusion

Everyday children are being stripped of their dignity and self-worth by a bully. It has become an alarming issue with equally alarming consequences. If a person is being bullied, they should tell someone, a parent, a teacher, a counselor, or a trusted adult. Parents of bullies, as well as victims, must take an active role in their child’s life and safety. In the event that, bullying is in effect, it is anyone and everyone’s responsibility to get help immediately. Saying nothing is just as bad as committing the act. It may not be happening to one personally, but it is everyone’s responsibility to help it stop.

The Psychological Effects of Bullying. (2016, Mar 18). Retrieved from http://studymoose.com/the-psychological-effects-of-bullying-essay 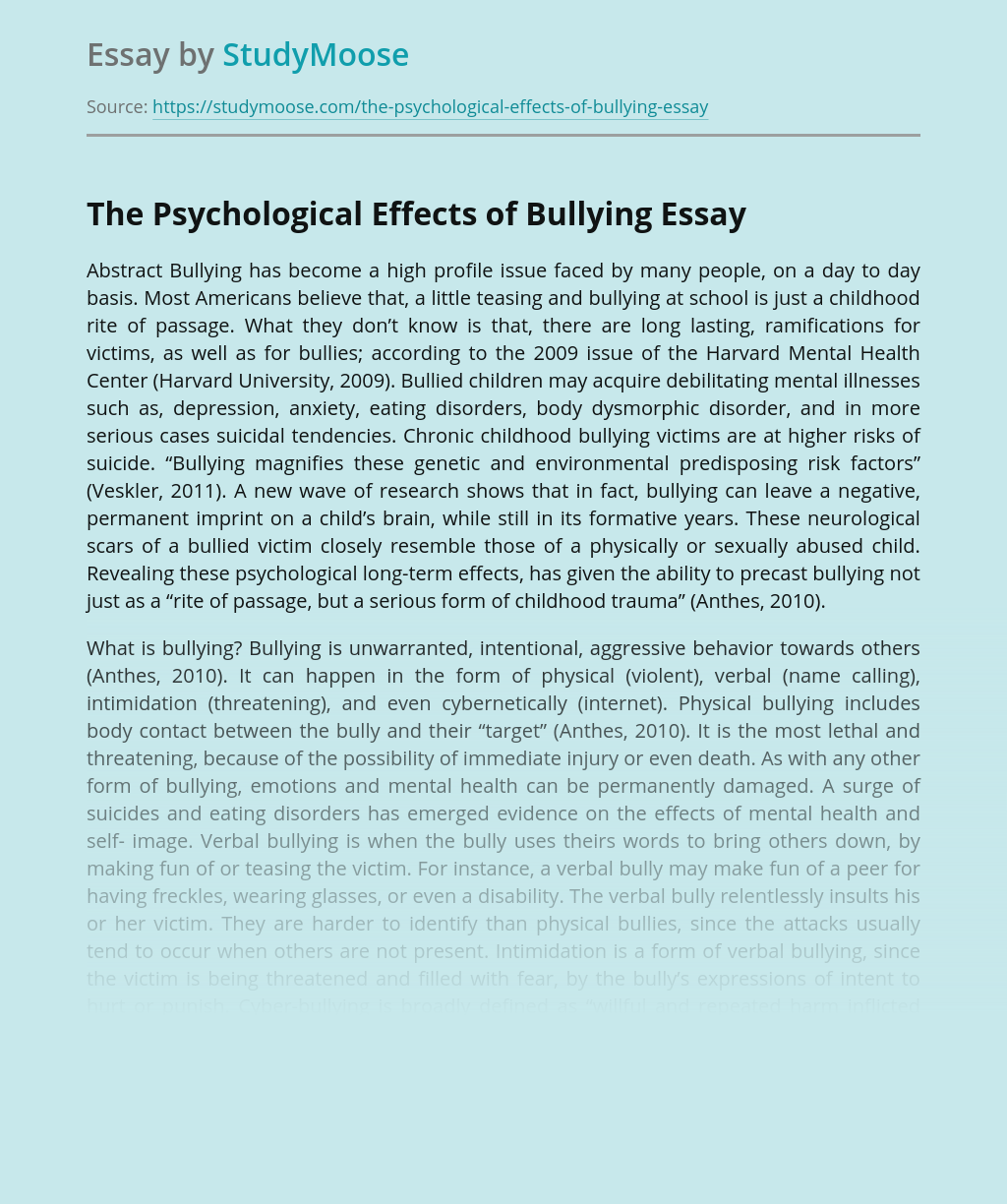 Don’t waste time
Get a verified expert to help you with The Psychological Effects of Bullying
Hire verified expert
$35.80 for a 2-page paper
Stay Safe, Stay Original