The long term and short term causes of World War 1

In 1914 World War I began. There were several causes of this war, and they could be divided into long and short term causes. The long term causes were imperialism, alliances, nationalism and militarism. The short term cause, which acted as a trigger to the Great War was the assassination of Franz Ferdinand. (Humanities Alive 4, pp 4-5) All the long term causes of the Great War were significant but perhaps the most noteworthy was militarism, which is the development of large and powerful military forces.

Don't use plagiarized sources. Get your custom essay on
“ The long term and short term causes of World War 1 ”
Get custom paper
NEW! smart matching with writer

In the early 20th century Germany had the strongest and largest army in the world. Britain dominated the oceans, and both countries were working furiously to better each other in both aspects. (Humanities Alive 4, pp 5) The contest between the countries with large military forces built up conflict and tension, breeding mistrust and hatred between the nations and alliances. This conflict was greatest between Britain and Germany and both counties had no reservations about going to war with the other.

There was great suspicion between the two. This brought the two countries and their alliances one step closer to war. The other larger nations in Europe were intent on increasing their military strength though conscription and also through new warfare technologies as well. (Humanities Alive 4, pp 5) This put the whole of Europe on edge and ready to fight and go to war. This frenzy for building up military force was encouraged by nationalism, the development of loyalty to your country.

Nationalism began to develop in Europe in the 1800’s and helped to form alliances between countries that had a similar culture and spoke the same languages.

Nationalism also created conflict between countries that had very different customs and beliefs. Nationalism caused many large disputes between countries that could have been solved in a non violent manner. (Humanities Alive 4, pp 4) For example the powers in Germany were worried about the size and prowess of Britain’s navy and they did not solve this in a diplomatic way, they increased the size of their own naval forces and in response Britain developed their navy even more and developed an even greater mistrust of the Germans. (Humanities Alive 4, pp 5) This mistrust of the Germans developed into loathing and caused the English people to further believe that their own country was far more important than Germany or any of its allies. Distrust and conflict was also increased by imperialism, which is the development of power and influence through large empires.

In the 19th century the British Empire was the empire where “the sun never set”. The British Empire ruled over the colonies Canada, Australia, New Zealand, and many colonies in Asia and other areas of the world. (Humanities Alive 4, pp 6) This massive empire worried other countries, but especially Germany. When Germany started colonizing regions of the world, Britain, and its allies started to get worried about this new rival and this prompted even more tension and unease in Europe. Germany and its allies were increasingly hated for trying to build up an empire that was not wanted by the main powers of Europe, Britain and its allies. (Humanities Alive 4, pp 5) Nationalism developed alliances which, along with the murder of Franz Ferdinand, acted as a trigger to starting the Great War.

Franz Ferdinand was shot dead on June 28, 1914. He was the heir to the Austro-Hungarian throne. He was assassinated by a member of a Serbian terrorist group, the Black Hand. (Humanities Alive 4, pp 5-6) Austria-Hungry blamed Serbia for the death of the heir and declared war on Serbia. That is when the alliances came into play. Germany allied itself with Austria-Hungry and Russia with Serbia. When Russia mobilized against Austria-Hungry, Germany gave them (Russia) an ultimatum which was to stop, or else! (Australia and the World, source 4.6) When Russia didn’t stop, Germany declared war against Russia and moved all its forces into Belgium to attack France, (Russia’s ally) from the north, wipe out the French forces and then turn all its attention to Russia. This was called the Schlieffen Plan. (Humanities Alive 4, pp 13) The flaw in this plan was Germany didn’t expect Britain to come to Belgium’s aid and declare war on them. This is what eventuated, the entire British Empire was at war with Germany and its allies. This was the beginning of World War 1.

The four long term causes of World War 1, Imperialism, Nationalism, Alliances and Militarism all worked to put all of Europe on edge, and with all countries having great hostility towards each other. They stimulated hate, conflict and distrust between nations and alliances. The slightest upset in any of international relations could have started a war. The assassination of Archduke Franz Ferdinand was the trigger and his death set off a long but rapid line of events that started the First World War. 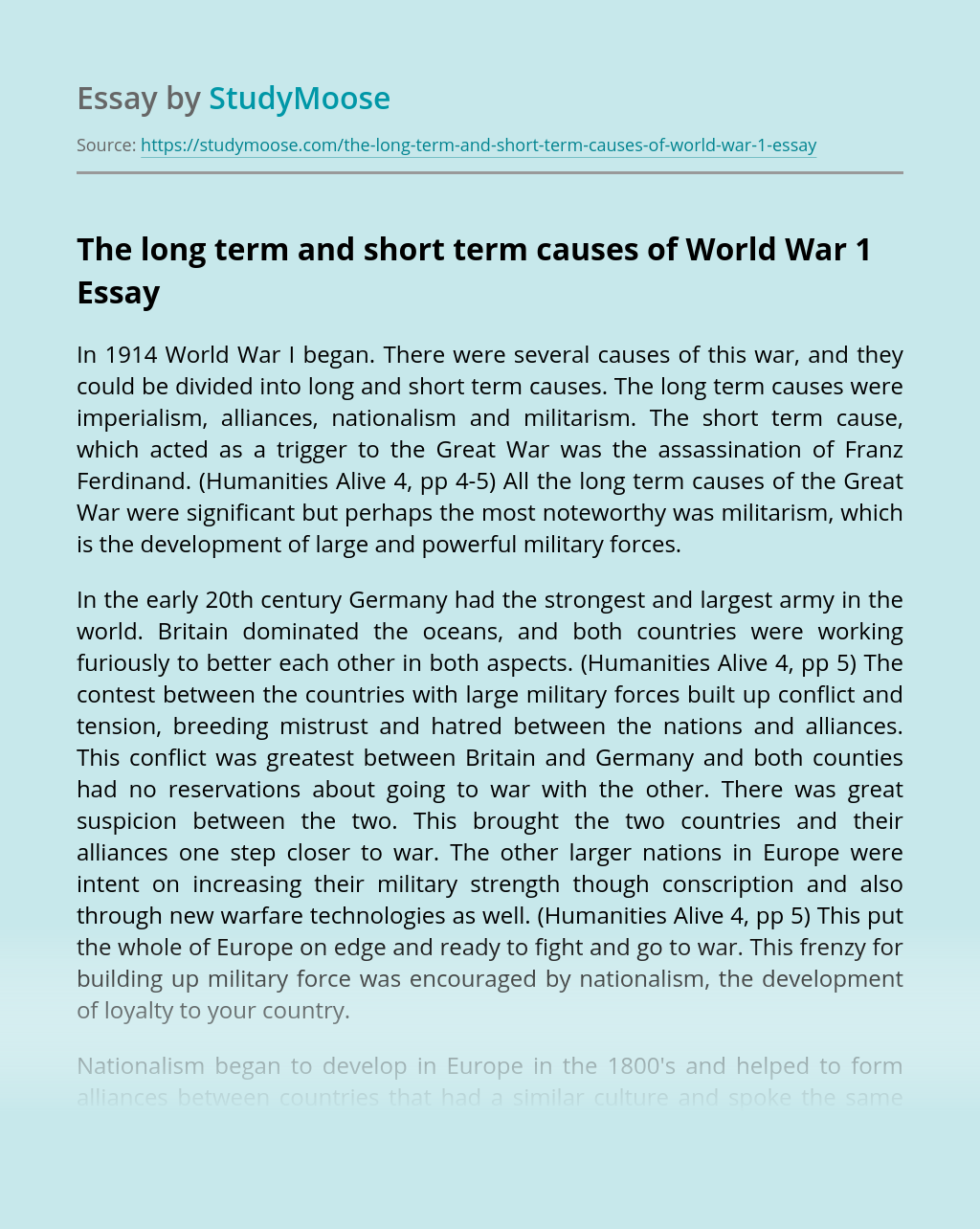