Cyber-bullying is when a person uses the Internet in order to deliberately cause repeated harm to another individual or to embarrass them. Cyber-bullying can include threats, sexual harassment or continued unwanted contact with a person via email, social networks, forums or instant messaging. Cyber-bullies have also been known to post personal information such as phone numbers, addresses and full names on forums or other websites. Almost half of American teens have experienced cyber-bullying. In a study conducted by iSafe. rg, 42 percent of kids have been bullied at least once while online.

Turn in your highest-quality paper
Get a qualified writer to help you with
“ Cause of Cyberbullying ”
Get high-quality paper
NEW! AI matching with writers

Cyber-bullies often create fake screen names, social profiles, and email addresses in order to harass and bully their victim without being recognized. This allows the bully to be free of getting into real trouble for their behavior. There can be some serious effects on the victims of cyber-bullying. Many victims have increased suicidal thoughts, fear, worry, frustration, anger, depression, becoming paranoid and a decrease in self-esteem. Sometimes a victim may even begin avoiding their friends and normal activities due to their anger and frustration.

Teens often begin to do worse in their classes due to their minds not being on their school work but on their cyber-bully.

The effects of cyber-bullying can, in rare cases, cause a victim to commit suicide. There have been four cases of suicides due to cyber-bullying recorded in the United States. Cyber-bullying adult victims can cause the victim to lose earnings, reputation and employment opportunities. Cyber-bullies may post the victim’s name and make up various lies about the person, defaming them.

Many employment companies do a web search on a person’s name before hiring them and this may be something that they find. Children and teenagers are becoming more technologically savvy and are looking to the Internet and their cell phones for entertainment, and to social networks to meet new people who share the same interests as them. It was only a matter of time before bullying made its way to the Internet, especially through modes like MySpace and Facebook. Cyber-bullies have been making news lately with the recent deaths of children across the nation who has perished because of online bullying campaigns.

Some examples of cyber-bullying include sending threatening emails, text messages or comments to another person; tricking someone into revealing private or embarrassing information and sending it to others; breaking into someone’s email or social media account and sending false messages to others while posing as this person; and creating web pages to make fun of another person. Even though the bullying doesn’t take place on a one-on-one basis, Myspace cyber-bullying and other forms of cyber-bullying still show the same effects.

Rather than just being bullied while in the classroom or playground, children can be the target of cyber-bullying 24 hours a day, seven days a week. Some of the more general effects of cyber bullying include poor performance at school, depression and low self-esteem. Because cyber-bullying can take place outside of the classroom and at a more frequent rate, the child may experience more extreme cases of these effects. Cyber-bullying also can happen accidentally. The impersonal nature of text messages, IMs, and emails make it very hard to detect the sender’s tone, one teen’s joke or sense of humor could be another’s devastating insult.

Nevertheless, a repeated pattern of emails, text messages, and online posts is rarely accidental. Bullying has been around for many generations and some people would say that it is just a part of growing up. If your child experiences physical threats, report it to the owners of the websites or local officials and keep a log of the bullying. As the saying goes, “What doesn’t kill you only makes you stronger. ” However in today’s technologically advanced age, the death of a child is never worth it.

Cause of Cyberbullying. (2017, Jan 21). Retrieved from http://studymoose.com/cause-of-cyberbullying-essay 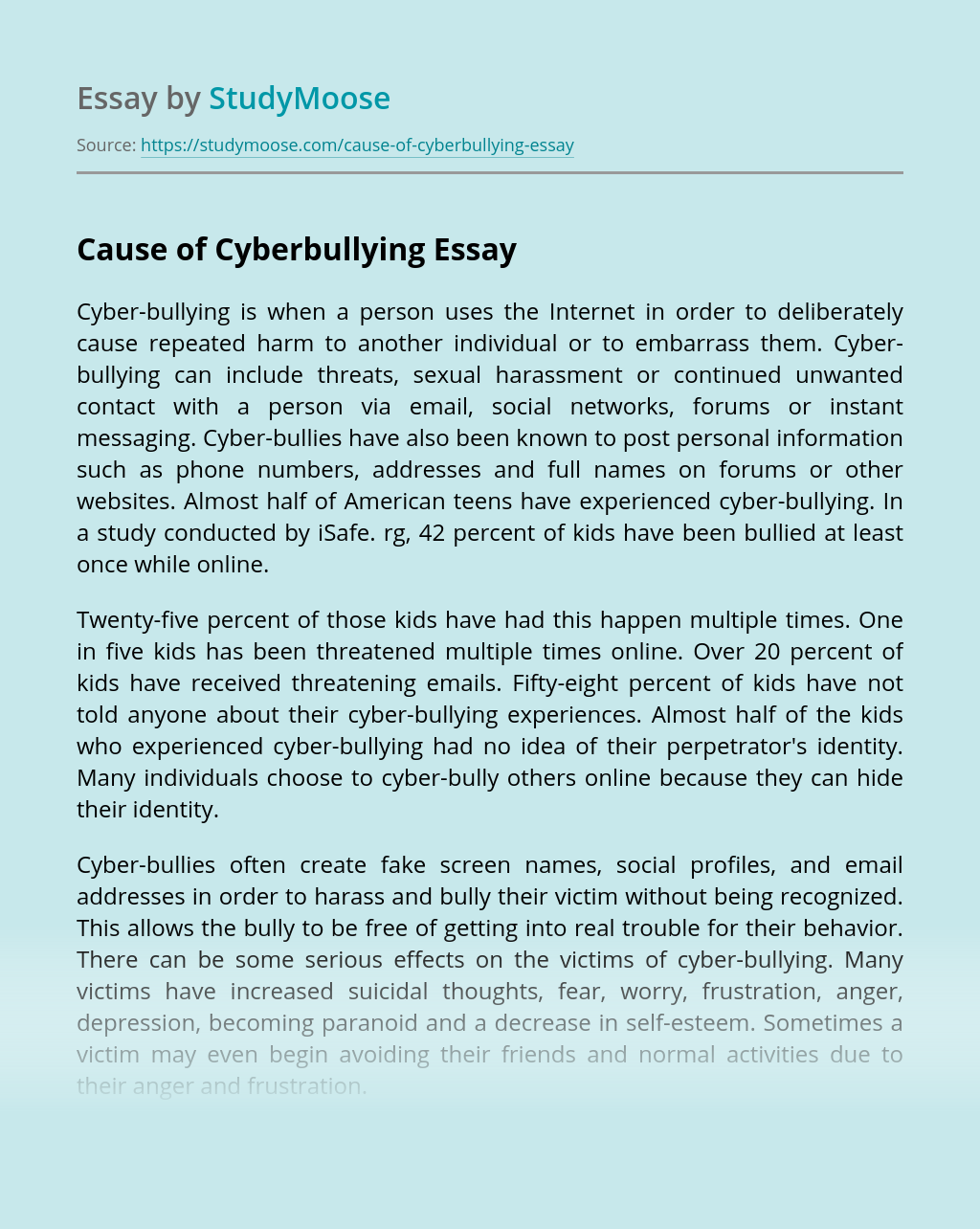 Turn in your highest-quality paper
Get a qualified writer to help you with
“ Cause of Cyberbullying ”
Get high-quality paper
Helping students since 2015
Stay Safe, Stay Original