The concept of “crime” has over the ages been subject to various definitions as the society tries to address it. Criminology is thus the study of crime and crime causation. It concerns itself with understanding the deep essence of crime as an act or omission, and all the reasons behind its occurrence. In this pursuit, criminology draws on various other fields such as sociology, biology, psychology, etc. This field of study is often argued to be a subdivision of sociology which the larger field since its main focus is grounded in social realities.

Don't use plagiarized sources. Get your custom essay on
“ Emile Durkheim’s Theory of Crime and Crime Causation ”
Get custom paper
NEW! smart matching with writer

Hence, during the twentieth century, the sociological approach to crime was the most influential, thus scholars such Emile DURKHEIM bought about considerable impact to the common perception of crime.

He was a French sociologist who, viewing the whole society as a reality, perceived crime as a mere element of the society; a completely natural phenomenon and which serves certain significant functions. This work is therefore intended to, throughout a concise discussion, explicate and analyze the theory of crime and its causation as perceived by Emile Durkheim, mainly considering its natural and functional characteristics.

Explain and Assess Durkheim’s theory on crime and crime causation.

1 In this pursuit, criminology, as a subdivision of sociology2, draws on many fields inter alia psychology, biology, anthropology, etc. In the twentieth century, the sociological approach to criminology became the most influential approach; this is basically the study of social behavior, systems, and structures. 3 Emile DURKHEIM, a French sociologist, is amongst the scholars who exerted great influence on criminology during that period.

He, unlike other scholars, both in and outside the field of sociology, perceived criminal behaviors as normal part of all societies. No society, he argued, can ever have complete uniformity of moral consciousness4, and thus, there has always been some deviant characters from the commonly accepted moral values. This write-up is therefore intended to briefly explicate and analyze the theory on crime and its causation as observed by E. Durkheim.

Scholars in almost all the fields (related to criminology in particular) before and after Durkheim have endeavored to find the cause for crimes. In this regard, they have attempted to find the causation of criminal behavior in different factors, including external factors such as in natural and supernatural forces,5 climate, economic conditions, density of population or certain ecological areas.6 In contrast to all the above factors, Durkheim maintained that the only explanation in relation to crime causation is to be found in essentially looking into ‘the very nature of the society’.7 In this respect, he was convinced that the individual is rather ‘a product’ than an ‘author’ of the society; he is, otherwise, a small image of the world in which he lives, hence, the causation of his behaviors, be they criminal or not, could be found only by understanding the society in which he lives. For E. Durkheim, crime is therefore immanent in society and results from social interaction.

Simply put, criminality proceeds from nothing but the very nature of humanity itself and, far from being transcendent, it is immanent.8 In his writings, Durkheim emphasizes on the immanence of crime; its causation as solely based upon the material world. Rejecting all definitions of crimes, as per the commonsense of any society, as acts that are harmful to society, Durkheim observes that all crimes, as a common characteristic, consist in acts universally disapproved of by members of each society; they shock sentiments, which, for a given society, are found in all healthy consciences.

9 Put simply, a crime is a deviant behavior only because it goes against social norms. From this perspective, arguably, the French sociologist seems to In reference to the pre-classical school of criminology whereby crime causation was understood as based upon supernatural forces, i.e. forces beyond the natural or human capacities. Adopt the legal definition of crime, as any act that the law makes punishable.10 However, unlike the proponents of that legal definition, he hold the view that the said act punishable by the law serves a significant social function which is to support and reassure the same social norms or laws of a society.

From the above elements, one would deduce that according to this theory, a crime is, arguably, a paradoxical phenomenon. Durkheim, the theorist, suggests that a crime is normally caused by or results from social interactions, and it is not deviant per se unless so declared by the laws or social norms. This is arguably Durkheim’s eminence in the field of criminology which rests upon his broad approach to anti-social behavior.11 However, it will be worth remembering that Durkheim, after identifying the essence of crime and causation, he went further to attribute to this phenomenon a certain function. This is what makes him different from all the scholars in the field of criminology. He observed that, not only is crime something normal in societies, it also plays some significant function.

The Normality and Functionality of Crime

Unlike other social scientists before and after him, Durkheim maintains that criminality is Normal factor rather than a Pathological one.12 Especially in current societies, this might seem really strange.

According to Durkheim, crime is normal because a society the society cannot get rid of it; it is utterly impossible for a society to exempt from criminality. He argues that it is a phenomenon, not due to any imperfection of human nature or society, but from the normal course of affairs in that given society. Hence, it is the fundamental conditions of the social organization that logically imply it.

Crime is hence all a part of the totality of a society. The criminal behavior is a behavior completely normal like any other and thus its complete eradication is quite impossible. Durkheim articulates; “A society exempt from it (crime) would necessitate a standardization of the moral concepts of all individuals which is neither possible nor desirable.”14 From this contention, one would concur with Durkheim on the fact that a society cannot get ride with or completely eradicate criminality. The criminal justice system is well-set, not to completely eradicate criminality, but to try as much as they can to reduce its level.

Furthermore, Durkheim was of the view that crime serves a non-negligible role within the society. The social function he attributes to crime is inextricably linked with the society’s legal system, in that it supports or reassures the social norms of the society by the fact that it is considered as going against the said norms.15 One of the main justifications for his belief is that the fact that crime is found in all society simply suggests that it must be performing some necessary functions; otherwise it would have degrading over the ages and by the end of the day, abolished in an advanced society.

16 One of the most effective and necessary functions, he argued, crime plays is ‘social change’.17 Crime could be considered as one of the effective sources of change in a society. This could be exemplified by, in line with his definition of crime, the events that happened in the United States with the Anti-miscegenation Laws that promoted racial segregation.18 These laws began being violated as the American society progressed, it reached a point where, in violation those laws (social norms), many people started having inter-racial relationships. To some extent, the violation of those social norms, which could be regarded as crime, brought about social change in the US. Durkheim further argues that without crime, there could be no evolution in law.19 For instance, every individual’s right to express himself should be guaranteed for any society to progress.

Hence, the opportunity for a genius or an artist to carry out his work affords the criminal his originality at a lower level.20 Thus, there has to be a certain evolution of the laws in order to face such situation from time to time. He further drew some analogy to the trial of Socrates; “According to the Athenian Law, Socrates was a criminal, and his condemnation was more than just. However, his crime, namely, the independence of his thought, rendered a service both to his country and the humanity.”21 In terms of evolution of the laws, this trial that occurred in the ancient ages is significant. From the above contentions, one would thus say, that crime should no longer be conceived as an evil that cannot be repressed. It should be considered, instead, as a normal phenomenon which can be faced for purposes of reducing its rate in the society.

Crime, according to Durkheim, is a normal phenomenon in the society that at the same time serves certain social functions. This paper emphasized on the fact that, unlike other scholars in the field of criminology, Durkheim perceived crime in, arguably, a kind of paradoxical manner in the sense that he started by defining crime as being caused by social interactions. For him, it is an act caused by social interaction, which (act) is not a crime per se, but it one becomes after being so declared by the social norms. He however recognized the negative part of crime, anyway, by conceding that crime is an act that shocks sentiments, which, for a given society, are found in all healthy consciences.

He finally suggests that, without condoning crime or presenting apology for it, crime must no longer be conceived as an evil that the society could be exempted from, but rather a reality that exists as part of the society to members of the society can react through punishment.22 Therefore, in stating that crime could be perceived as merely a normal and natural element, he conceived the whole society as reality which is meant to move and evolve.

Emile Durkheim’s Theory of Crime and Crime Causation. (2016, May 05). Retrieved from https://studymoose.com/emile-durkheims-theory-of-crime-and-crime-causation-essay 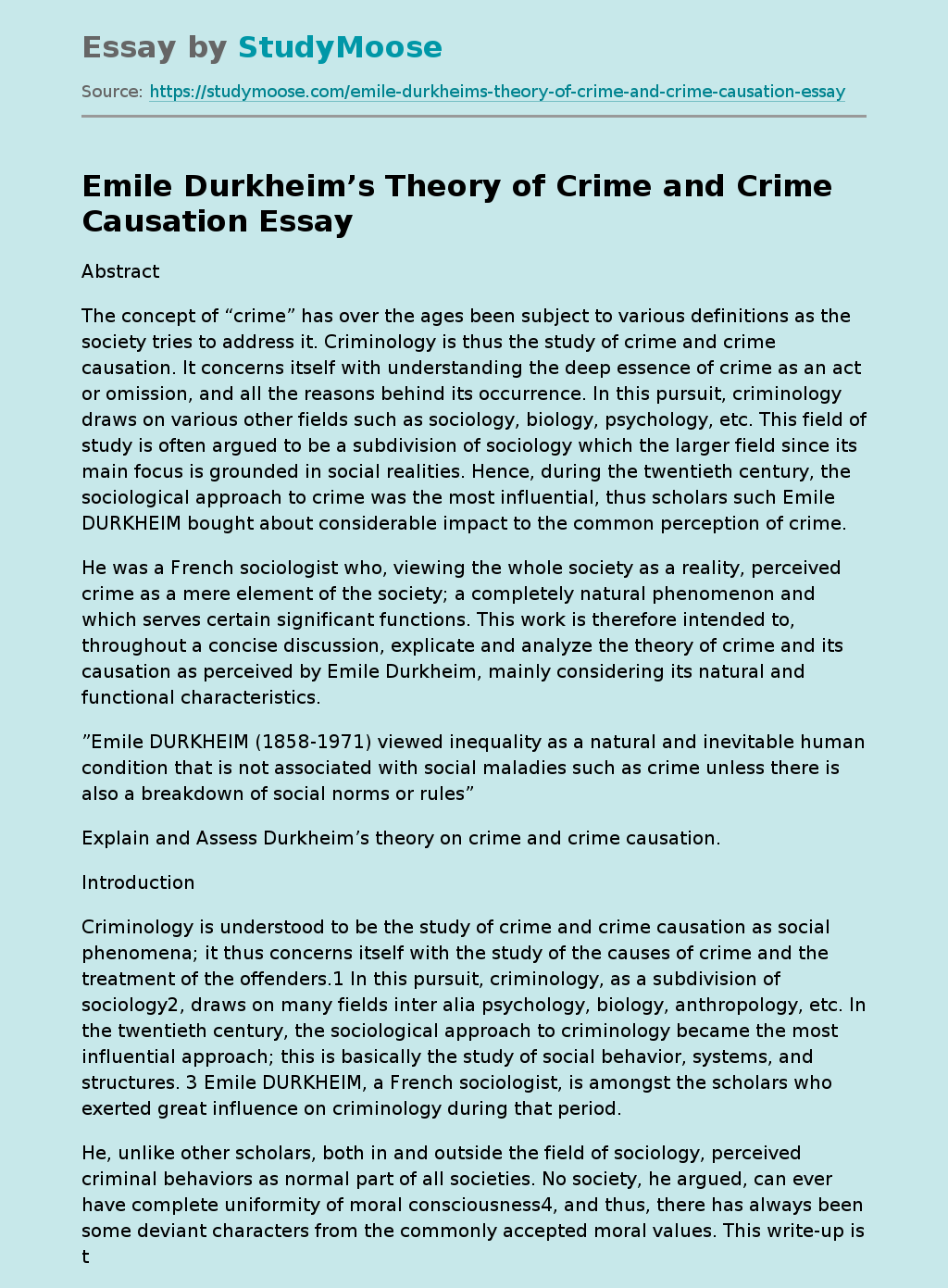