Comparison of Marx, Durkheim and Weber

Marx, Weber, Durkheim, introducing the godfathers of sociology. Three of the most influential theorists that are debated on and about till our present time. How have three very different individuals in history have maintained the template as we know it to understanding society, which has been over three centuries old? How is it that three different worlds and times in history, has had such familiarization not only for their respected times but a revelation to today’s systems and structures. Let us explore the minds and studies of the three men, and discover were they either Genius’ or foe? Summary:

The “Manifesto of the Communist Party” by Karl Mark was first written in 1848 in a time where rules on workers and working conditions where at minimum to none.

Turn in your highest-quality paper
Get a qualified writer to help you with
“ Comparison of Marx, Durkheim and Weber ”
Get high-quality paper
NEW! AI matching with writer

At the precipice of social and political turmoil in Germany, Mark writes “The history of hitherto existing society is the history of class struggle (Marx 2007: p.96).” Marx was elaborating on how things were and how things are going to be.

In the first parts of his essay he correlates the examples of ancient times, where man enslaves men for the sake of material gain or economic growth. From Politics, religion and history in of itself are structures based to suppress the worker and is what maintains the so called Class Struggle.

According to Marx, all aspects of theses systematic ways to which concentrates on the gain of material, economic growth or dominance, will continue the destructive pattern until the end of time or until resource runs out.

A foresight into the future of what he called elite society’s feeding of the backs of feudalistic society’s. This was the battle of class struggle. The manifesto reflects if not cries for a declaration of political changes since society has been at war with absolutism and over privileged aristocrats since the French revolution. Marx focuses on a new enemy, Capitalism.

In marks view capitalism was the epicenter for the division of people into two literal classes. The Bourgeoisies (the capitalist) who owned the factory, mine, assembly line, and then there was the Worker. The worker would trade their cheap labor to the capitalist for a wage and the capitalist would give them (the worker) as little as possible that they could get away with. In Marx’s efforts of change, he tries to suggest the idea of communism, the end all – be all aspect that could put an end to oppression and abuse to the working conditions of the common man.

Emile Durkheim wrote his essay called “Division of Labor in Society” in 1893 which allowed an influence in advancing sociological thoughts and theories. Durkheim explains how the division of labor can benefit society due to its increase in the skill level of the workman, a creation of solidarity amongst people and an increase in the reproductive capacity. Durkheim elaborates on how it established the moral and social order within people and has a further concept on economic interests. Durkheim explains that there are two main kinds of social solidarity: one is being mechanical and the other being organic solidarity.

This means that society as a whole is organized and that people in a group share the same common beliefs. “The totality of beliefs and sentiments common to the average members of a society forms a determinate system with a life of its own (Durkheim 2007: p. 162).” The shared system that society binds together in on, is what he called the collective consciousness, this system allows each individual to bind together for one common goal or purpose. However, in organic solidarity society must be a system of functions that differ in functionality but unite by relationships.

For this to work each person has to have a distinct job and a personality that is independently their own. Individuals can grow as does society grows, making it more efficient as moving in sync but the moving parts are customary to one’s self. In organic solidarity societies are advanced and civil, the members of that society become more of an individual which starts distinguishing themselves from each other, developing the division of labor. Law is a major factor that Durkheim basis a lot off.

A sort of symbolism and order to social life two types of law can be observed. Repressive law (punishing the guilty) and Restitutive law (restoring correctives to the offender). Durkheim applied that more mechanical solidarity. Anomie is introduced as the deregulation that was occurring society. He sheds the light on how people were supposed to act with each other were breaking down and at a time didn’t know what to except from each other. Anomy literally translates” the state or condition of individuals or society characterized by a breakdown or absence of social norms and values (dictionary.com.)”.

Max Weber in 1922 writes “Bureaucracy”, where weber believed that structured organizations is a formal, rigid authoritative figure, whereas Weber was referring to the types of businesses that ran their organization like a family type, informal structure. He believed that those in a managerial position should be appointed due to their levels of professionalism and expertise.

“The principle of office hierarchy and of channels of appeal stipulate a clearly established system if super- and subordination in which there is a supervision of the lower offices by the higher ones (Weber 2007: p.265).” Weber explains in his writings that the old ways such as feudalism in his time should be done away with, and that society changes their structure to a more organization of hierarchical principle.

For example lower level subordinates follow the orders of the superiors but still have a chance to appeal unlike traditional authority to a more a wide spread structure. Weber had a level of rules that a organization would had to follow in order for it to work. The highest positions had to be experienced and professional, rules had to be set and written down in the form of a record to follow. The official has to be full time and makes a career out of his or her job. Administration would belong to the office and key point that weber makes is that they are appointed not elected, and for their work would receive wages; depending on the level of the level of their expertise or education.

As we compare each writer’s studies, there are some obvious notions and contradictory arguments at hand. For example the comparison of Weber and Marx is that Weber believed a stern clear chain of command that had leaders, duties, and subordinates to appoint and follow. He believed it was very necessary for the success of not only capitalism but society as a whole. In Marks case the powerful “bourgeoisie” (capitalist) was the enemy because of their hierarchy of power, they became corrupt and money hungry making the whole system flawed disregarding the humanity of people in that quest for all round dominance.

Marx belief was if anything more similar to Durkheim’s anomie theory, whereas the lacking of a sufficient system up rise in workers and the individual. Durkheim would see it as a necessity for a system to further its functioning as a whole. Contradictory to both, Weber argues that society is not driven by social conflict or of its uniqueness but solely society has actors and each actor has a certain role and part in a larger picture that translate into relationship for a larger picture like mechanism with many wheels to move for one purpose, forward.

You could even entertain the notion that Karl Mark and Emile Durkheim were positivists and Weber was not. Either way all still had their own genre of advancement for better understanding the complexity of society. Even if there suggestion and recommendation may differ, we can all agree that people, humans, mankind in its purity is still very complex and dynamic.

The article I’ve chosen is, on September 21, 2012 from the “guardian” say British, and other country officials in Beijing want to discuss the advancement plans for nuclear energy. The talks are positive to bump more nuclear plants around the world but continue to keep a low carbon footprint. Amid all the disasters and ugliness of nuclear waste that has been destroying the environment, corporate companies promise to find a renewable source of energy without destroying the earth. Marx in this case would say that this is only a humanization to capitalism and masks the true essence which is just profit, and will continue to disregard the oppression of the earth and will continue to fool people on the process waste will not hinder people until the people will be feed up of it and revolt.

Weber would say Bureaucracy takes place as it is known that big corporates try’s to maneuver around policy and government that this is an attempt to maximize profit through the process of power because laws have been cracking down on plants, so a professional stand point on the case will keep the law makers at bay to further continue the necessary energy needed by all people who use it.

Durkheim would agree that the solidarity of this issue would arise because of such an impact of waste people would never allow it and change of policy’s would have to be introduced and in order to keep loyal customers they have to acknowledge the values to protect the earth which will in the future advance technology and people. However, Weber’s theory would be the most persuasive in this topic, because of the scarcity of energy this is a necessary evil, to by any means necessary achieve affordable energy. No matter the costs.

Comparison of Marx, Durkheim and Weber. (2017, Feb 25). Retrieved from https://studymoose.com/comparison-of-marx-durkheim-and-weber-essay 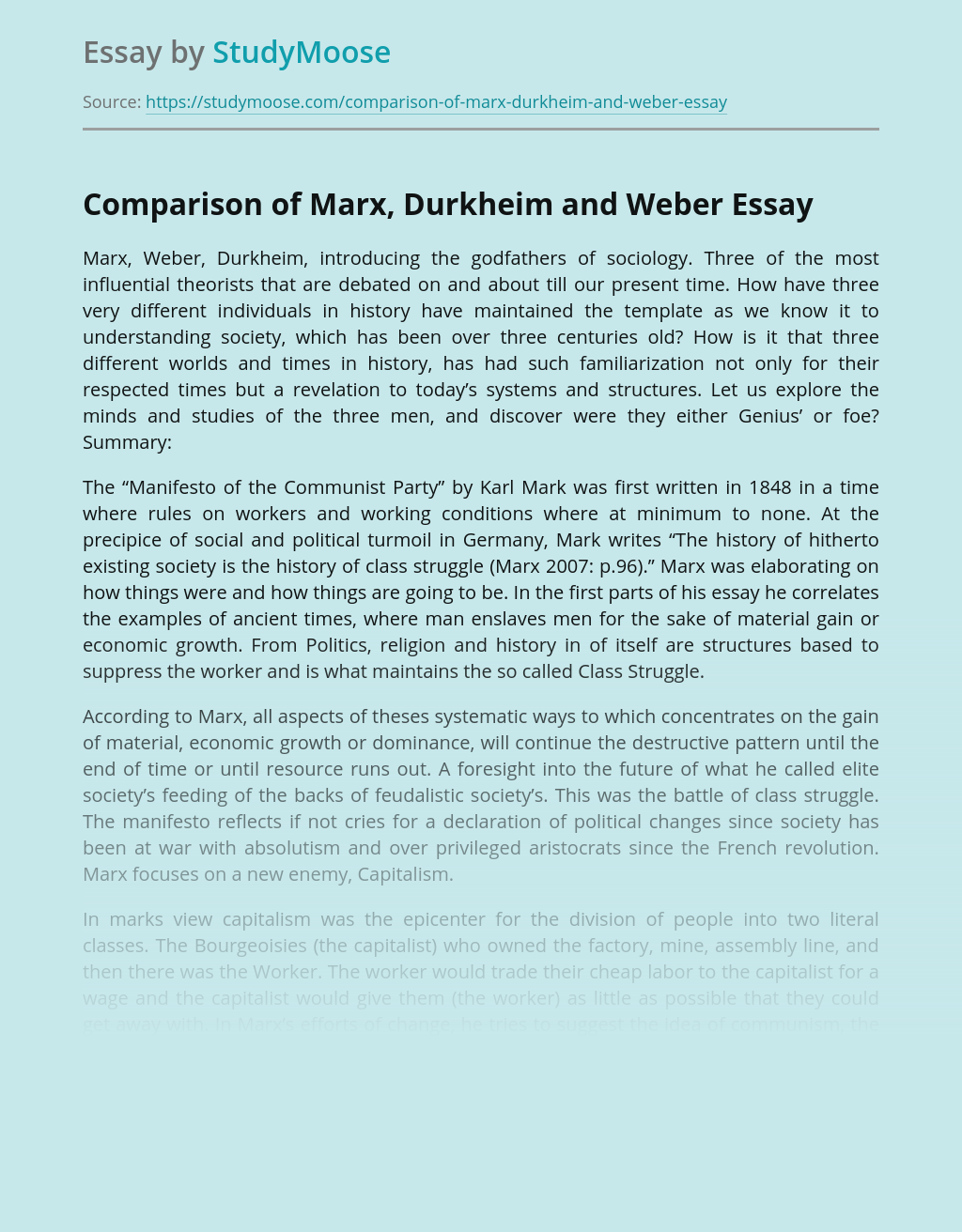 Turn in your highest-quality paper
Get a qualified writer to help you with
“ Comparison of Marx, Durkheim and Weber ”
Get high-quality paper
Helping students since 2015
Stay Safe, Stay Original