Philosophy is referred to as a set of beliefs, concepts and attitudes held by an individual or a group of people. It is the study of problems in general and the prescription of solutions to problems based on critical and systemic analyses and the employment of rational argument. Philosophy through the lens of Political Science does so as mentioned above in terms of the state, the governance of the state the ethics of an individual in possession of political power. Political philosophers focus on the issues relating to the state, such as political action that need or need not be taken and the general behavior of a given individual involved in politics.

Turn in your highest-quality paper
Get a qualified writer to help you with
“ Comparing Political Philosophies of Machiavelli and Weber ”
Get high-quality paper
NEW! AI matching with writer

With the focus set on just the state, political action and violence, two philosophers have critically analyzed politics through the three concepts listed above: Niccolo Machiavelli and Max Weber. They each have their own views, opinions and suggestions that both have similarities and differences considering the cultural and temporal inconsistency between the both of them.

The fact that some of their ideas intersect is fascinating.

Niccolo Machiavelli, known as the founding father of modern Political Science, lived between 1469 and 1752 in Florence in what is known today as Italy. He is not only known for his work in politics and diplomacy, as he was also a well-versed historian. He employed the method of citing historic figures and events in his justification for the suggestions he made in his famous book: The Prince. In the book that was dedicated to Lorenzo Medici, Machiavelli raises many important aspects relating to the political environment, governance and ethics of an individual in possession of political power citing political actions that should and should not be taken, the state briefly and violence in governing which is studied by political philosophers today as there are many ancient concepts and practices mentioned in the text that can still be incorporated into modern political practices.

Max Weber famously known as one of the three founders of modern Sociology, lived between 1864 and 1920 in Germany. Although he specialized in the field of Sociology, Weber did delve into the world of politics. His methods differ from that of Machiavelli as time progressed, so did society and the knowledge possessed by mankind. Instead of employing the method of historical analysis in his philosophy of politics, Weber utilizes Sociology in his analysis of the political realm. In his groundbreaking essay titled ‘Politics as a Vocation’, Weber explores the world of politics through political actions based on social implications; be it good or bad and weighing the benefits against cost. He goes on to mention the state and its rights of governance in which violence is also cited. This document is also of interest to those in the field of politics, as his definition of the state has become the general understanding of Western social thought.

In this paper, I would argue that although their opinions on governance may be different on the outlook, they share a similarity, which can be detected through analyzing their philosophies carefully. This also means that they share differing views on the concepts of political action, the state and violence which will also be analyzed in this paper.

In his book, The Prince, Machiavelli focuses his attention on counseling and educating the prince, Lorenzo Medici in the treacherous world of politics. The book is considered in simple terms a manual to being the prince. As such, he elaborates on an array of ideas relating to politics. For the purpose of this paper, the content of his writing will be analyzed through the three concepts listed above. In terms of political action, Machiavelli writes about cruelty and violence and the proper use of the evil act of cruelty. He admits that cruelty can and should be used wisely once within a rule as he explains in his words “Injuries therefore, should be inflicted all at the same time, for the less they are tasted, the less they offend.” (Cahn, 2011, p. 260). He then goes on to say that after that one infliction of injury, the prince should gradually distribute benefits in small quantities successively (Cahn, 2011, p. 260). Machiavelli raises a good point in his explanation above as when people are constantly subject to miseries, injuries and misfortune, they will eventually grow weary of it and revolt, however if the need for the use of cruelty arises and is applied in the prince’s governance at one point of time, it is only felt once and can sometimes be forgiven through time.

It is basic knowledge from daily observation that repetitive actions can be very irritating and that understanding can be applied in Machiavelli’s justification for the use of cruelty. As for the distribution of benefits after the fact of cruelty, it works well as Machiavelli states that the subjects can fully savor the goodness of the benefits if they are given in small quantities successively. After being treated with cruelty, the gradual distribution of benefits would show the subjects that it can only get better from there on and would appease the subjects. This concept can be seen today in many forms of government, where benefits such as tax returns or any form of government assistance is always given in small amounts and in monthly or yearly intervals.

This is where Machiavelli relates political action to violence. The state can also be related to Machiavelli’s conception of political action. Through his writings, Machiavelli was seen as an individual who detested representative governments or republics and therefore refers to the state as the prince’s possession which meant that the prince was the state. As such, the prince or the state was free to act in a way that it sees fit for the greater good of the state itself. Machiavelli’s conception of the state suggests that he believes a different set of moral rules apply to the state and that it is unreasonable for the state to act just like a regular person would act.

In his essay titled “Politics as a Vocation”, Max Weber explores the world of politics through the lens of Sociology. As Weber delves into the lecture, he begins by stating that politics exist exclusively in the realm of the State and between states. This leads Weber to defining state in his own words, “Today, however, we have to say that a state is a human community that (successfully) claims the monopoly of the legitimate use of physical force within a given territory.” (Weber, 1919, p.1). Weber, Like Machiavelli, believed that the violence and cruelty could be incorporated into governance however with the explicit use of the term ‘legitimate’. The idea of legitimate violence is ambiguous in a sense of what is considered legitimate violence? The ambiguity of the term has created a ‘grey-zone’ for which the definition of legitimate violence can be debated.

However, gathering from his ideas and considering his position in the timeline of political philosophers, Weber’s understanding of legitimate violence can be explained as violence that is state sanctioned to protect the majority of the people within a state. This means that the state can use violence to halt the advance of individuals who commit crimes that harm the state as a whole in which the greater good of the state is the reason for violence rather than personal gain. For example, in the recent 2010 Toronto G20 Summit riots, those who were involved in the rioting were subject to violence from the police (who are authorized by the state to act on its behalf) who arrested the rioters. The riot was a harmful act carried out by a group of citizens and by using violence, the police were able to curb the threat and return downtown Toronto to its regular daily life. Weber’s definition of the state and his use of the term ‘legitimate violence’ satisfactorily connects the three concepts listed above.

Comparing the ideas of Machiavelli and Weber, there are some notable similarities although the two philosophers lived in different points in history and also in different parts of Europe. There are also some clear differences in their view of politics which will be listed. Both Machiavelli and Weber condone to state sanctioned violence with the purpose of the greater good of the public, however their views on the degree of violence differ substantially. For Machiavelli, he believed that cruelty and violence should be used only once and it can vary in degrees depending on the circumstances. This means that Machiavelli condones to excessive use of violence in one single use. As for Weber, his idea of the legitimate use of violence would imply that the violence used would be used in a way that it is not excessive and used only to temporarily disable rather than harm permanently. Their views on the state are also quite similar and different at the same time.

Machiavelli refers to the state as the prince’s possession while Weber referred to the state as an entity that had the power to use legitimate violence. The similarity between the two ideas is the fact that they both agree the state has rights that regular citizens do not. The difference is that Machiavelli believed the prince was able to act freely (wisely) in any way he seen fit to achieve success. Weber on the other hand believed that violence should only be used against those who threaten the peace and security of the state rather than personal gain.

Machiavelli’s philosophy can be seen as a more realistic view of human nature and his suggestions are more appealing as they are more practical to individual gain. He is one of the few philosophers that acknowledges and condones to evil as many philosophers tend to write only on how men should live rather than how men actually live. Weber also has a sense of practicality in his views but is more downplayed and fair as violence or evil in his opinion was to be used to maintain peace and order within the state.

After the analysis of the two philosophers, it can be concluded that although their views may seem very different, they are in a way similar. Their views on violence are both the same to a point and also different when they delve further into explaining more into the concept. Their conception of the state are also similar to a point until it was elaborated upon which clear differences could be seen. They both agreed violence could be used in governance however the degree and actual purpose differed when analyzed. In terms of their conception of the state, they both agreed that the state has rights that normal citizens were not in possession of to carry out violence. 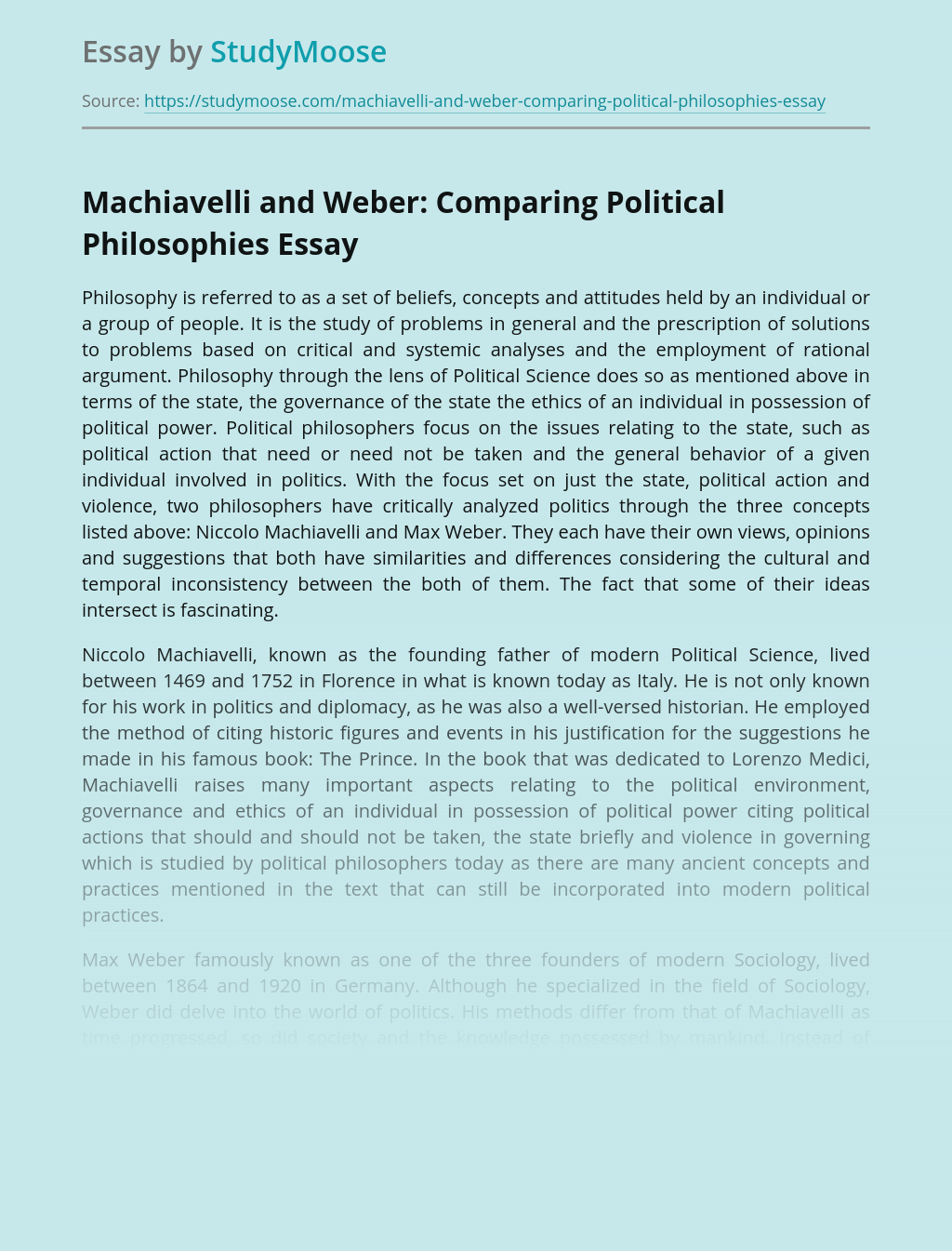 Turn in your highest-quality paper
Get a qualified writer to help you with
“ Comparing Political Philosophies of Machiavelli and Weber ”
Get high-quality paper
Helping students since 2015
Stay Safe, Stay Original