The liberal perspective on political economy is embodied in the discipline of the Western economics (Gilpin, 1987).

Turn in your highest-quality paper
Get a qualified writer to help you with
“ Liberalism and Mercantilism ”
Get high-quality paper
NEW! AI matching with writer

It emphasizes the individual interests, the freedom and the maximization of economic benefit. Economic liberalism is based on the theory of “invisible hand” of Adam Smith and founded by David Ricardo in the seventeenth century. In the 1940s, Friedrich August von Hayek made a renaissance and a new explanation to it. Moreover, Milton Friedman made great contribution to the economic Liberalism in the 1970s. The basic standpoints of economic Liberalism are that people should be treated as the “rational economic animal” and market emerges spontaneously to satisfy human need.

When the market running it develops according to its internal logical rule, rather than people’s will. Even through economic activity can enhance national power, the core of it is to bring beneficial to each consumer. Due to each person are both consumer and producer, so every action of each person should be a rational choice in the market.

Because resources are scarce, every decision involves an opportunity cost, a tradeoff among alternative uses of available resource (Samuelson, 1980, p.

27). Get something at the cost of giving up something else. Hence everyone’s rational choices contribute to a balance among various powers in the market. The balance of these various powers makes the market have its intrinsic stability. That means the market is not only an automatic operation system, but also an autocorrection equilibrium system.

Any intervention, especially from the government, is helpless to market development and destroys the intrinsic stability of market. Therefore, economic Liberalism opposes any form of government intervention strongly. Economic liberals claim that politics makes people separation while economy makes people solidarity. A liberal international economy will have a moderation influence on international politics as it creates bonds of mutual interests and a commitment to the status quo. (Gilpin, 1987)

According to Sen (1984), Mercantilism believes that industry has spillover effects and it associates the possession of industry with economic self-sufficiency and political autonomy. The most important, industry is prized because it is basic of military power and central to national security in the modern world. Actually, Mercantilism can be divided into two parts, “benign” Mercantilism and “malevolent” Mercantilism. The “benign” Mercantilism considers the safeguarding of national economic interests as the minimum essential to the security and survival of the state.

It hopes to develop and protect domestic industry with the state power (like tariff, exchange rate, etc) and to prevent foreign product competition, for example, monetary policy. While “malevolent” Mercantilism advocates to build a powerful state and to ensure foreign trade unblocked with using of state power and regards the international economy as an arena for imperialist expansion (Hirschman, 1969). Even through there are differences between these two Mercantilisms, the goal of Mercantilism that makes state rich and powerful is clear and unified. (Magnusson, 1987)

Compare and contrast of Liberalism and Mercantilism

The debate between Liberalism and Mercantilism has a long history. There are three main differences between these two ideologies of political economy according to Goddard (2003). Firstly, Liberalism focuses on the market mechanism and believes that the economic role of government is limited. However, Mercantilism pays attention to the role of state and considers politics decide the economic activity. Secondly, Mercantilism regards world economy as a zero-sum game which means one country’s loss is as the prerequisite to another country’s gain. Moreover, Mercantilism thinks conflict between different countries is inevitable. Each country can only rely on its own resources to protect itself eventually.

However, Liberalism opposes the zero-sum game. It believes the only consequence of the zero-sum game is war. Liberalism stresses the mutual benefit and a win-win situation which lead to international cooperation and interedependency. That is, dividing an existing cake is inferior to make a bigger cake (By promoting economy growth). Finally, Mercantilism focuses on the importance of military power and regards political and economic power as a way to ensure the security of state. Liberalism thinks accumulation of military power and other powers reduces the economic efficiency. Peace is more effective than war. The following table coming from Frederic shows the specific difference between Liberalism and Mercantilism (1999).

6. Magnusson Lars. 1987. “Mercantilism and Reform-mercantilism: The Rise of Economic Discourse in Sweden During the Eighteenth Century” History of Political Economy 19: 3.

8. Samuelson Paul A. 1980. Economics. With the Assistance in Statistical
Updating of William Samuelson. New York: Mcgraw-Hill.

10. Viner, Jacob. 1994. Power versus plenty as objectives of foreign policy in the seventeenth and eighteenth centuries, World Politics, No.1 p.11 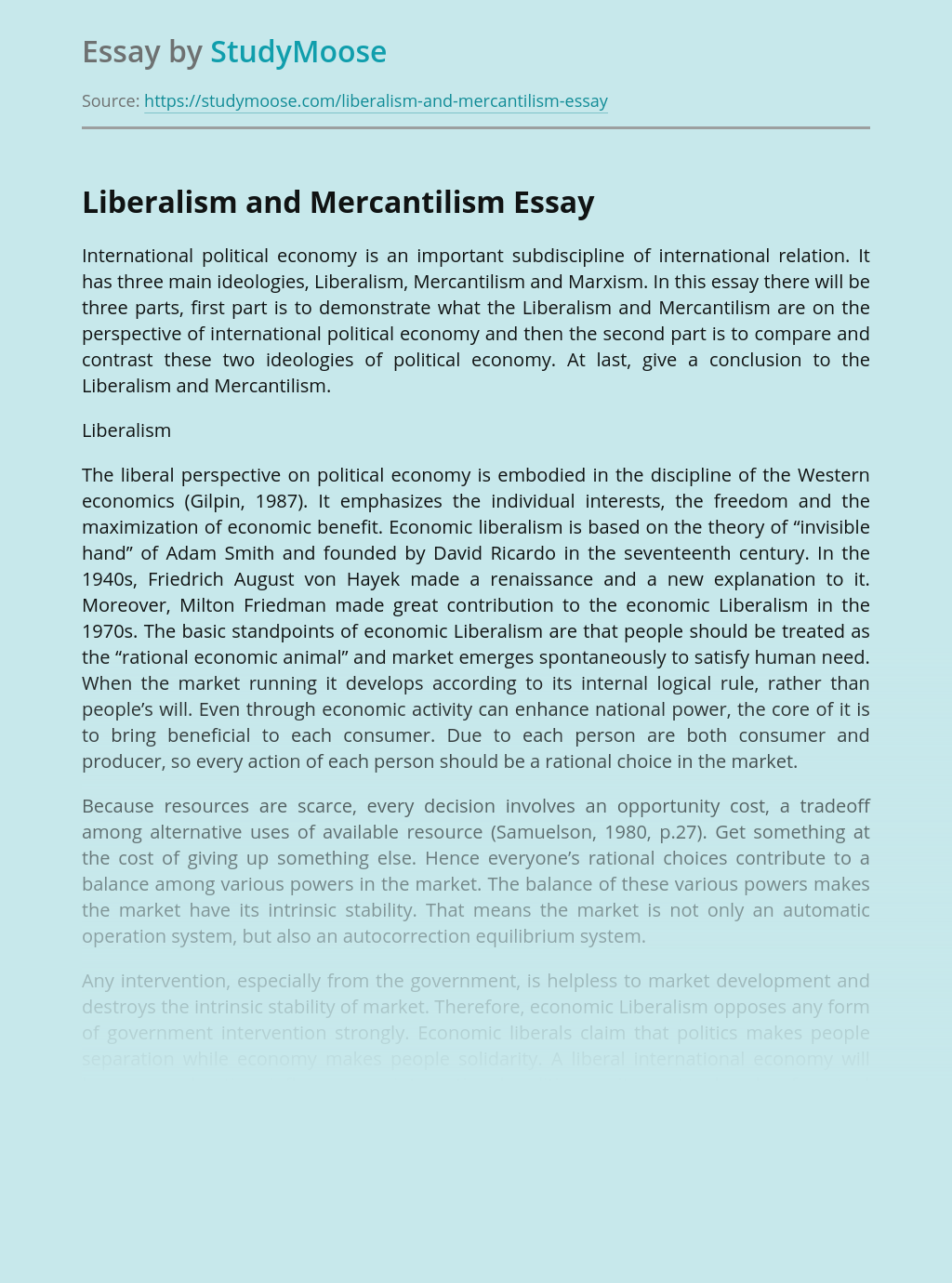 Turn in your highest-quality paper
Get a qualified writer to help you with
“ Liberalism and Mercantilism ”
Get high-quality paper
Helping students since 2015
Stay Safe, Stay Original