Critically discuss the similarities and the difference of conservative theories and transformative or critical theories. These theories entail idealism, realism in contrast liberalism and Marxism. 5 Main assumptions to draw a concluding contrats between a Marxist transformative theory and theories of idealism and realism”

Firstly, like Realism, Marxist transformative theory assumes that the structure of the international system is an important factor to consider when we want to understand international relations.

Don't use plagiarized sources. Get your custom essay on
“ Philosophical Theories of Idealism, Realism and Marxism ”
Get custom paper
NEW! smart matching with writer

Whereas realism places emphasis on the anarchic political structure of the world, Marxist transformative theory emphasises the fundamental production (economic) structure and the difference places taken up by states, societies and classes (bourgousesie, proletariat). Some examples: Russia 1920’s, workers revolution due to the economic structures put in place by the Monarchy, was an application of the Marxist theory, when it was foreseen that the workers class or proletariat, would assume control.

Marxists also stress power, we saw how realist viewed the distribution as th4e most important explanatory variable in international relations, whereas idealist introduce a range of other factors which can be used to explain the events and tendencies.

Idealists and Marxists reject realisms almost obsessive pre=occupation with the state. Idealists argue in favour of a plurist point of view, namely that there are many and varied types of actors in international relations. And in the specific context which type of actor plays the dominant role, realism overemphasises the state’s role. However Marxists are not plurists, they regard only a few types of actors as crucial economic players.

Finally, on the question of whteher international display a basic continuity or not, Marxists transfomatits find themselves between realists and idealist. Like realists, they believe there is not continuity. For Marxists this continuity exists in the fact that throughout history in the fact that throughout that control the means of production and where privilege because of that, while other groups suffered, on the other had, Marxists believe that this basic contiuntiy does not rule out the possibility does not rule out the possibility of fundamental transformation. Like Idealist, Marxists also believe that the world can be made a better place. But, where they differ, is that Marxists do not see this improvement as a natural process, but as something that has to be deliberately done. 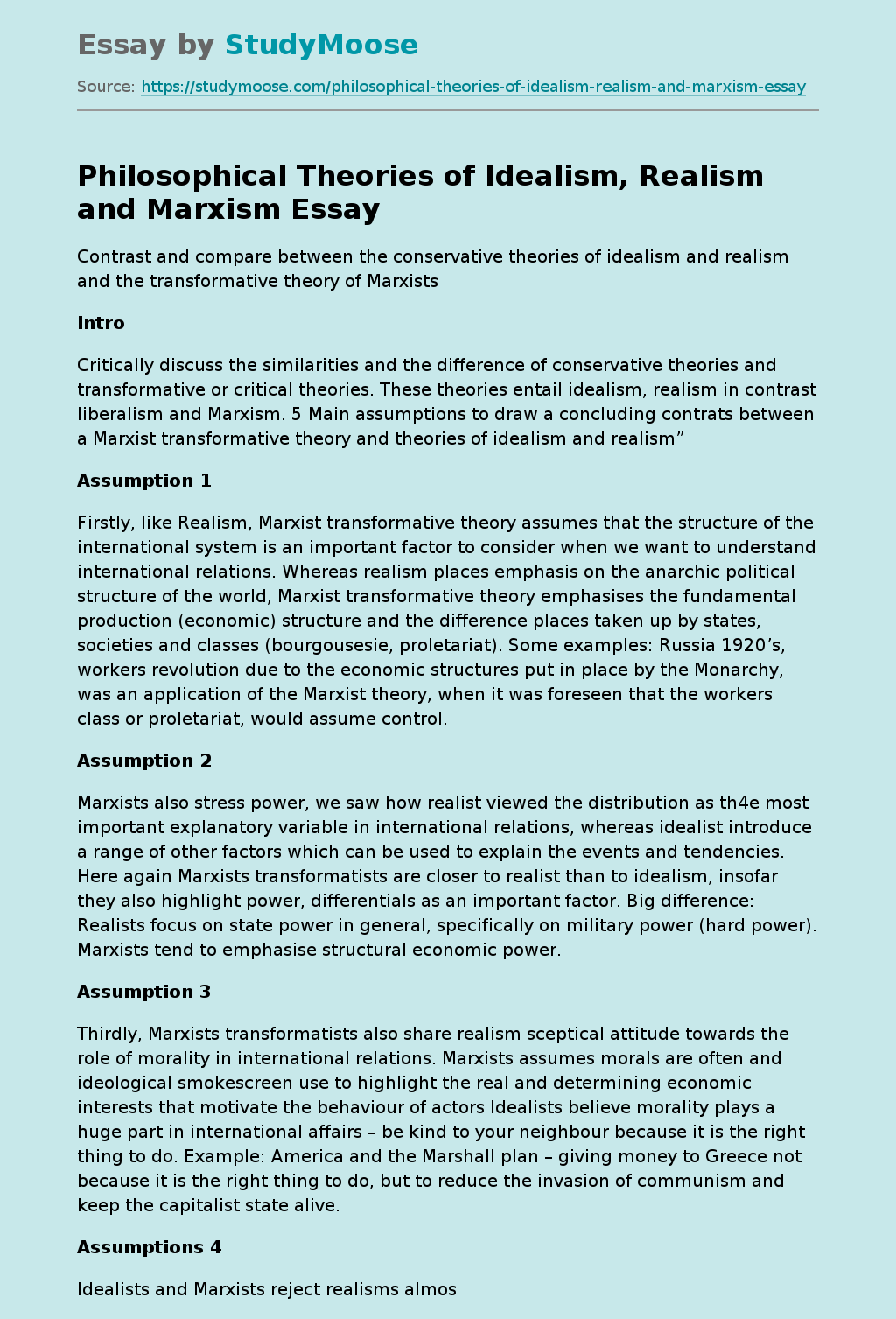