Idealism in general refers to any philosophy that argues that reality is somehow dependent upon the mind rather than independent of it. More extreme versions will deny that the “world” even exists outside of our minds. Slight versions argue that our understanding of reality reflects the workings of our mind first and leading that the properties of objects have no standing independent of minds perceiving them.

In Western civilization, Idealism is the philosophy which maintains that the ultimate nature of reality is ideal or based upon ideas, values and essences and that the so-called external or real world is inseparable from consciousness, perception, mind, intellect, and reason in the sense of precise science.

Don't use plagiarized sources. Get your custom essay on
“ Idealism vs Realism ”
Get custom paper
NEW! smart matching with writer

It is also a tradition in Western thought which represents things in an ideal form, or as they ought to be rather than as they really are, in the fields of ethics, morality, aesthetics, and value.

Some forms of idealism, like that of Berkeley, are often contrasted with materialism.

Some idealists, like Spinoza, are monists as opposed to dualist, again like Descartes, or pluralist ontologies. Plato is called an idealist because of his theory of Forms or doctrine of Ideas, which are “ideal” in the dictionary sense. Most interpreters, ancient and modern, hold that Plato does not describe the Forms as being in any mind, instead he describes them as having their own independent existence, for which the evidence is adduc various translations of the dialogues.

Indeed, some non-idealist commentators say that in the dialogues Socrates often denies the reality of the material world.

This is only to his recognition to shadows in the “Allegory Of The Cave”. It seems in some ways clear that Plato is not, a subjective idealist, like Berkeley. Plato’s Allegory of the Cave is sometimes interpreted by non-Platonists as drawing attention to the modern European philosophical problem of knowing external objects the question that is often attributed to Descartes, Locke, Berkeley, and other early modern philosophers.

According to certain materialistic interpretations of Plato, which construe matter as an entirely external reality, the Forms that the Cave-dwellers are ignorant of are not external to them in the way that so-called material objects are for modern thinkers. Again, some non-idealistic readers hold that for Plato the Forms are true realities, but they are not outside of us in a spatial sense like material objects, which some natural scientists call physical bodies.

For these interpreters, one might say, the issue that Plato’s allegory addresses is the problem of how one can know what is truly real and good a theme which apparently is opposed to the so called modern question of our knowledge of the external world, However, speaking in the realm of pure abstract theory, even if Plato doesn’t share the specific concerns of modern philosophy, and of George Berkeley, in particular, Plato could still be a chooser idealist. Plato could believe that matter has no so called independent existence, that ultimate reality is known only in the world of ideas.

The German neo-Kantian scholar, Paul Natorp, argued in his “Plato’s Theory of Ideas. ” The nature and valid concept of realism is one of the most debated issues in contemporary metaphysics, perhaps even the most emotionally debated issue in contemporary philosophy. The question of the nature and likely of realism comes with respect to a large number of subject matters, including ethics, aesthetics, causation, modality, science, mathematics, semantics, and the everyday world of macroscopic material objects and their properties.

Although it would be possible to accept realism across the board, it is more common for philosophers to be selectively realist or non-realist about various topics. In addition, it is misleading to think that there is a straightforward and clear-cut choice between being a realist and a non-realist about a particular subject matter. It is rather the case that one can be more or less realist about a particular subject matter. Also, there are many different forms that realism and non-realism can take. There are two general aspects to realism, illustrated by looking at realism about the everyday world of macroscopic objects and their properties.

First, there is a claim about existence. Tables, rocks, the moon, and so on, all exist, as do the following facts: the table’s being square, the rocks being made of granite, and the moons being spherical and yellow. The second aspect of realism about the everyday world of macroscopic objects and their properties concerns independence. The fact that the moon exists and is spherical is independent of anything anyone happens to say or think about the matter. Likewise, although there is a clear sense in which the table’s being square is dependent on us, this Khabouth 4 is not the type of dependence that the realist wishes to deny.

The realist wishes to claim that apart from the dull sort of empirical dependence of objects and their In general, idealism holds that the account remains uncertain as to its source. The thing in itself and the representation are not identical else they would be one. There is no way to absolutely ground the representations as to their source. Hume’s anaysis of causality took this uncertainty to skepticism by describing the causal pattern of billiard balls as nothing more than patterns of colors where we psychologically attribute causal forces to one ball over the other.

Hume reduced causality to an association, and there is no necessity in our associations. For example, one may see evil in money while others see only good. The formations people hold are accidental and random. Two managers react very differently given identical situations. One may be rude while other apolegic. We generally dismiss some claims as insane or false. In general, realism holds that substances are real and have nothing to do with ideas. In other words, substances are not ideas and not their properties reducible to mental qualities such as color or weight despite the relativity in our responses to this phenomenon.

For example, one might see red while another sees blue or one feels the rock is heavy while another feels it as light. These qualities are not subjective for the realist because they belong to the thing, not to our subjective feelings or mind. The realist would hold that the proof of such things is found in objective evidence that has nothing to do with the mind. So , colors are properties of the thing’s features such as carbon absorbs white light perceived as black while lead has a specific weight and density in spite of who is holding Khabouth 5 it.

A microwave will boil a specific amount of water in a specific time, and psychological associations have nothing to do with it other than learning or relearning that boiling water hurts. Cause and effect are real relationships among substances, and the universe operates according to the laws of nature regardless of our habits or mental constructs. Realism and idealism everyone has one type of path that they follow and that they understand better. Philosophy Essay Bibliography • http://www. newadvent. org/cathen/07634a. 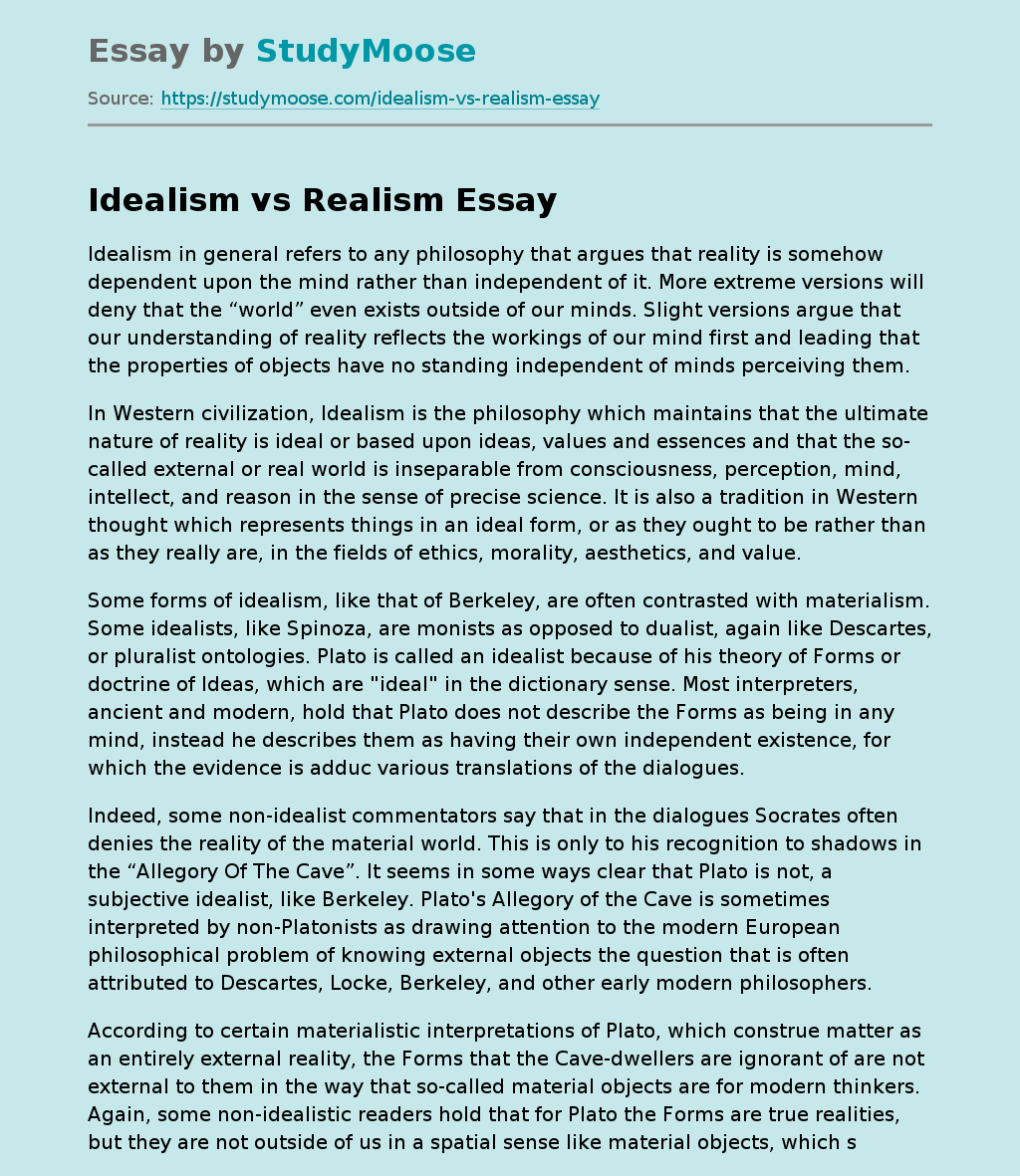