Comparison of Machiavelli's and Castiglione's Books

When you read The Prince and The Book of the Courtier, you notice they are both how-to guides for Princes, royalty in general, and nobility. However, there are some very distinct differences in the philosophy of Niccolo Machiavelli and Baldassare Castiglione. Castiglione advices his readers to practice all things with nonchalance, and things will fall in their place. He also put high importance on knowledge, gracefulness, and appearance. Machiavelli agrees with Castiglione on some issues, but on others, they strongly differ.

Don't use plagiarized sources. Get your custom essay on
“ Comparison of Machiavelli’s and Castiglione’s Books ”
Get custom paper
NEW! smart matching with writer

Knowledge of arms and military is necessary for any Courtier or Prince. The Book of the Courtier advices military might be exercised with vigor often to win a favorable reputation. The prince will only be secure when he can raise his own army to defend against all comers. Machiavelli advises that a Prince should study war, read history, and know his land.

The public appearance of a Prince in the community was different in The Prince as it was in The Book of the Courtier.

Castiglione wished a Courtier to be pleasing at first sight, and loveable to all who see him. Opposing that view, Machiavelli thought a Prince needed to destroy all resistance, using cruelty to be secure. The Prince cautions a Prince must also appear to be good, but know how to be evil. The following excerpt from The Prince contrasts the result of taking Machiavelli’s advice, “You can gain an empire by slaying citizens, deceiving friends, and being cruel, but you cannot obtain glory in that manner.

Going about securing an empire once obtained is also told differently by the two authors. Castiglione’s advice is mostly about the importance of reputation and favor by the people. His suggestion is to gain favor by remaining humble. Being the bearer of bad news is never good when trying to earn the favor of those around you. Machiavelli has several ideas about securing an empire that are very blunt, but true. A Prince would encourage art and craft, use only capable servants, and keep them under control if following Machiavelli.

Both authors have two almost totally opposite theories of how to obtain and secure a position of royalty. Machiavelli’s ideas are more cruel, violent, and suppressive in nature. Castiglione is almost completely opposite in his theories of a mostly peaceful rule. A Prince/noble himself must select what route he wishes to take by personal preference in deciding what kind of Prince/noble he will become.

Comparison of Machiavelli's and Castiglione's Books. (2016, Jun 25). Retrieved from https://studymoose.com/comparison-of-machiavellis-and-castigliones-books-essay 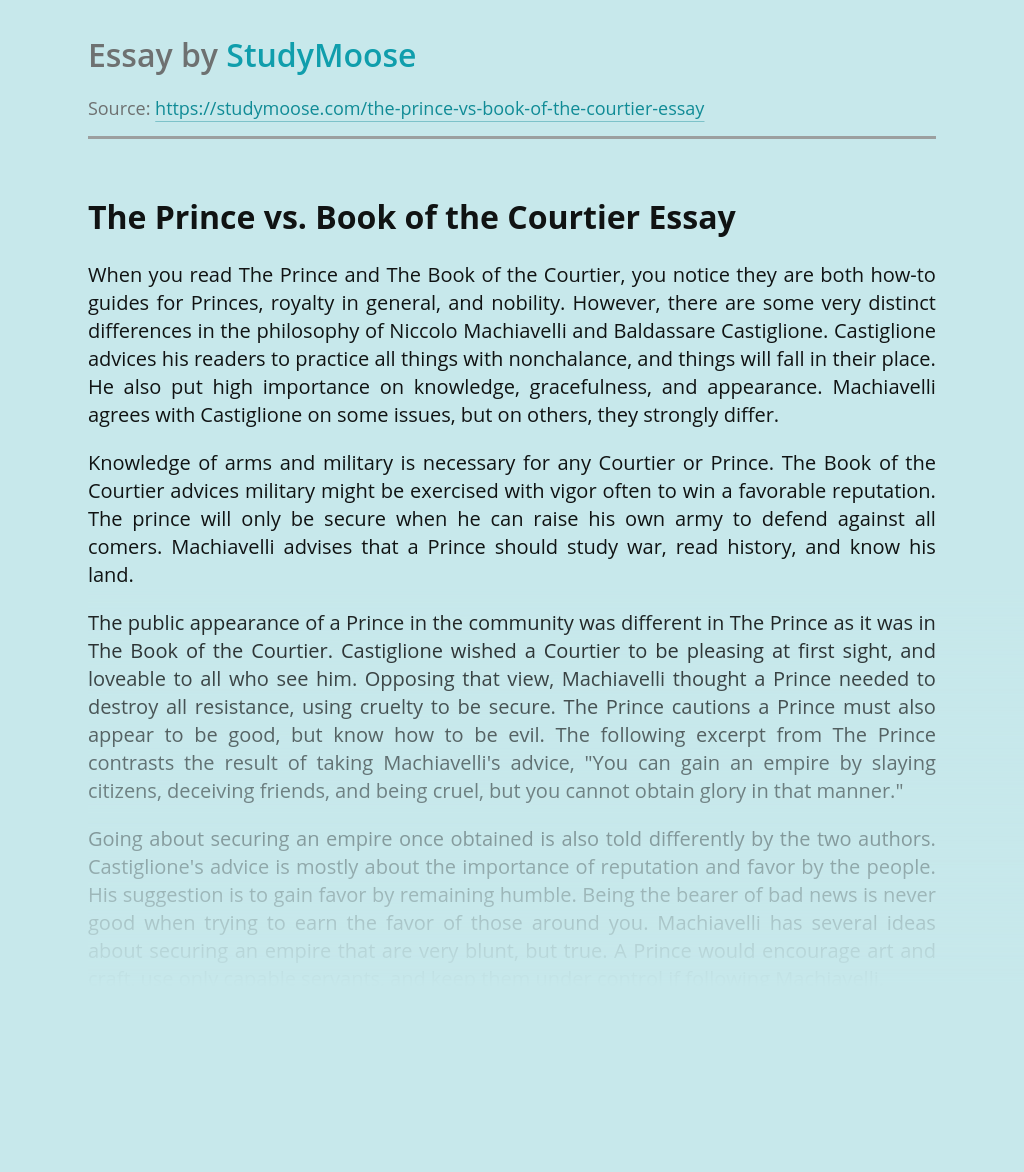