Virtue and Fortune in Machiavelli’s The Prince

Throughout The Prince, Machiavelli outlines the characteristics needed to be a strong and admirable leader. He explains that personal characteristics such as courage and compassion, both being aspects of virtue, will earn him praise. However, he feels that this expectation is unrealistic and a prince’s first job is to protect the state, and having “bad” characteristics is sometimes necessary to reach that goal. That being said, in order to protect the state a prince may have to act unscrupulously at times which he believes will bring good fortune in the long run.

Don't use plagiarized sources. Get your custom essay on
“ Virtue and Fortune in Machiavelli’s The Prince ”
Get custom paper
NEW! smart matching with writer

Machiavelli believes that no matter how a prince acts, whether moral or not, virtue and fortune are the two most influential forces in politics and he shows how, throughout history, they have affected different people in powerful positions. Using the lessons learned by previous people of great political power, Machiavelli points out virtues and fortunes present in the particular cases, while then explaining his beliefs and solutions to the examples from the past.

Virtue and fortune go hand in hand throughout this guide. One must have good fortune to be given the opportunity to show his potentially virtuous qualities, and the virtue that one portrays will, in turn, determine one’s fortune. When discussing acts of virtue, Machiavelli determines self-reliance to be the top priority. A prince who is able to take advantage of good fortune and rely on his own abilities will success at sustaining power over his state because he will have built a strong foundation for being a ruler.

He will then gain the trust and loyalty of his army along with respect of those he has overpowered. Then he will therefore be better prepared to deal with issues that arise, without having to rely on others or outside factors. The more independent and self-reliant the prince, the more capable of success he will be. One of the main topics that is expanded upon in this book is the relationship between the skillfulness of a ruler, his chance, whether good or bad, and their effects on gaining and sustaining power over a state.

Virtue, in this case is not used to mean moral and righteous, but has the present meaning of being a real man, which is defined by Machiavelli as having the skills, strength, intelligence, and clemency of a ruler. Fortune, on the other hand, is the luck and opportunity that is given to the ruler. Therefore, by means of fortune, a ruler is subject to nonphysical sources that has given him power. When one becomes a ruler, he needs both his inner skill set as well as good chance to present them.

Without fortune, one’s skills will not be able to be portrayed while gaining power, and without one’s skills, a given chance will pass without being taken advantage of effectively. Machiavelli takes monumental figures of history such as Moses, Romulus, Cyrus, and Theseus to exemplify his points. All of these rulers were given the fortune to acquire power over their state and each illustrated virtue based on their skills and strength. These rulers took advantage of the chance they were given and created a long-lasting success.

As Machiavelli states that “the fortune determines one half of the actions” (Machiavelli Ch 25), the other half is controlled by the ruler himself. Virtue is the best defense for fortune, and virtue must be used in order to keep fortune under control. The prince must take advantage of the fortune given to him based solely on the betterment of the state. By being given the opportunity to be a leader, one must use his inner ability to form a new order that he sees fit for him and his people.

Although he may face problems, being a real man and making the right decisions will cause him to keep his power much more successfully than a ruler who merely relies on his fortune. Machiavelli advises the prince to disregard the moral principles when acting on behalf of his state. While it is desirable for a prince to act generously when he can, he should never let that get in the way of good governing. Even though generosity seems admirable, it is ultimately harmful to the state, and therefore should be avoided.

A prince will never be hated for lack of morals, but he will be hated only if he fails to maintain the state. Both virtue and fortune play a role in Machiavelli’s advice. One must be able to take on the characteristics of a real man, making courageous and executive decisions, with the help of fortune which will be in one’s favor if the prince makes smart choices. One’s fortune is determined as “unreliable and capricious” (Machiavelli Ch 7), which is why rulers who do not have the knowledge to properly command will look their power quickly.

On the other hand, because fortune is unreliable, no matter how virtuous the ruler, the power may be lost as in the case of Cesare Borgia. He was given the chance to be a ruler through inheriting the title from his father, Pope Alexander VI. From Machiavelli’s perspective, during his rule, Borgia portrays his virtue and becomes a good example for other to follow. However, with his father’s early death and his own sickness, fortune does not seem to be on his side and he begins to lose his control. With his final error of choosing the wrong Pope, he completely loses his power.

Borgia shows the effects of having bad fortune which lead to bad decisions on his part. Machiavelli also supports the idea that life cannot be ruled only through fate and fortune. Fortune can be managed through acts of virtue. He elaborates on the idea of fortune by comparing it to a “torrential river,” (p74) which destroys everything when angry. If the person does not act cautiously, his fortune may destroy his life and power. Therefore, using skills while making decisions is necessary to protect the power of the ruler.

Machiavelli provides Italy as an example, comparing it with Germany, France, and Spain. If the Italian rulers were able to manage the country by balancing precaution with their skill set, the country and its fate can be protected from frequent issues. By managing fortune with virtue, rulers can modify their dealings to improve their chances of succeeding. Machiavelli believes that any ruler that wishes to gain and keep the power should use his good fortune and virtue accordingly and in a well balanced manner. A ruler should also be able to learn and imitate the actions of those who succeeded before him.

By learning the events of past rulers, one can more effectively learn to balance fortune and virtue. Although Machiavelli mentions that “If a prince wants to maintain his rule, he must be prepared not to be virtuous” (Machiavelli Ch 15), he will still not be able to rely on his fortune to be successful in the long run and his fortune will disappear sooner rather than later. Throughout Machiavelli’s guide on being a successful ruler, the concepts of virtue and fortune prove to be prevalent themes. As he discusses his ideas about rulers’ path to success, virtue and fortune seem to be inseparable.

One is not able to exist without the other, one is unable to substitute the other. Although Machiavelli states that rulers have to act in a way that will best benefit the state, whether or not it be in a moral essence or not, virtue and fortune always play a part in a prince’s ruling period. If a prince has bad fortune, then his virtue will not be able to come through either. One must be given the opportunity to rule and have good fortune in order to present his skills and acts of virtue just as the virtue that one portrays will, in turn, determine one’s chance in the long run.

Virtue and Fortune in Machiavelli’s The Prince. (2016, Dec 11). Retrieved from https://studymoose.com/virtue-and-fortune-in-machiavellis-the-prince-essay 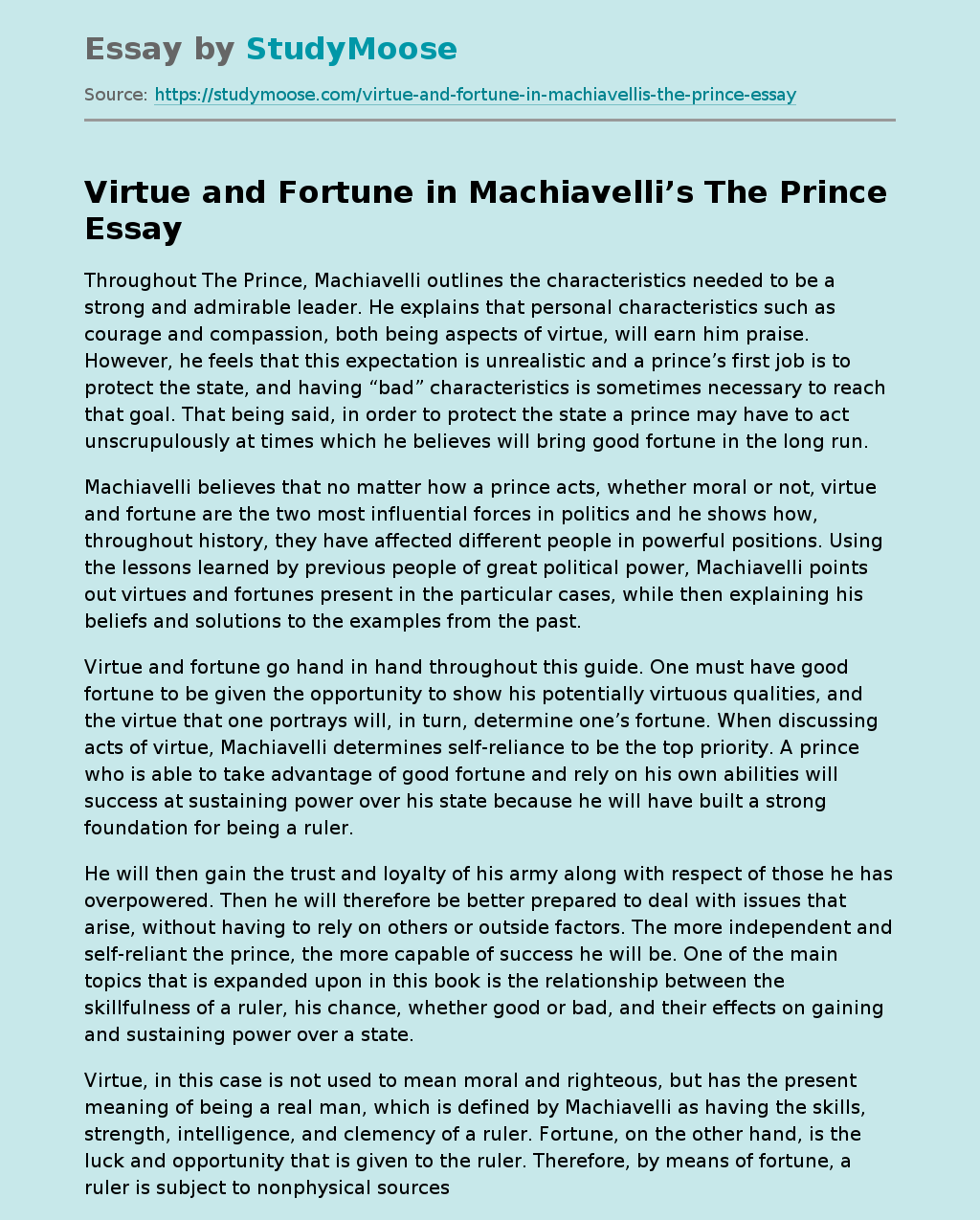