Beginning in the late 2000s, Smartphones gained popularity all over the world. The number of users is rapidly increasing following the new versions of Smartphone and extension of various application software. Smartphone is a mobile device that enables internet access and communication. It allows us to do things that we never imagined before. We can access and get information on the web with the phone no matter where we are. In response, experts are coming up with new technology to broaden their market.

Don't use plagiarized sources. Get your custom essay on
“ Smartphone Addiction ”
Get custom paper
NEW! smart matching with writer

According to the article Addictive Personality and Problematic Mobile Phone Use the main reason behind the cell phone addiction may be the smart marketing of cell phones as a status symbol. Having the phone has become a way to identify oneself. However, we always need to consider the pros and cons of the use of smartphones. And there are statistics and stories about the phone addiction and show how serious it is.

Psychologists argue that the dependence on smart phones is so robust that if the user by any chance becomes unable to continue in his accustomed lifestyle, he literally suffers from withdrawal symptoms the same as withdrawal symptoms occur in any substance abusers.

They become restless and easily get irritated. They lack concentration on almost anything. It occurs because the mobile phone becomes a part of their daily lives and controls the whole life style either directly or indirectly. Hence, when the number of calls drops or if they lose their mobile phones, all the addiction-related symptoms become prevalent.

According to Factors Associated with Cell Phone Use in Adolescents in the Community of Madrid[2] by Sanchez-Martinez, M ; Otero, at the usage they are more likely to dependent on smartphone and thus, contact people using the social networking with the phone, which is a more passive way and less demanding than direct personal relation. Most symptoms of smartphone addiction can be only experienced with the people with the addiction.

The person becoming preoccupied with the addiction, spending a lot of time on watching and touching the phone should be aware of their level of addiction and need to be concerned about recovering from addictive behavior. The signs of addiction include using it in the bathroom, feeling a brief moment of panic when it’s misplaced, feeling like a friend has been lost when it is broken broke it and you feel like you lost a friend, a full battery charge barely lasting the day, and the addicted person cutting back on necessities to afford the cell phone bill. Too much intervention of phone to our lives can cause problems both in the life of the phone user and irritate others. We need to control its uses not to intrude into our life excessively. But the anxiety has a label, too, Nomo phobia which is anxious and uneasy feeling when an addictive person is without mobile phone or out of battery, called no mobile phobia.

There is an enormous impact of the mobile phone on contemporary society from a social scientific perspective. Mobile phones affect every aspect of our personal and professional lives. In the book, Perpetual contact : mobile communication, private talk, public performance the author James E. Katz PhD said They have transformed social practices and changed the way we do business, yet surprisingly we have little perception on their effect in our life . So considering further problems, these days, cell phone uses are restricted in certain cases considered to be problematic. As a result, there are an increasing number of legislative and societal controls over cell phone uses. In the article Psychological Predictors of Problem Mobile Phone Use,[5] the author Adriana Bianchi said But, some people still use cell phones despite the safety regulations or in certain banned or illegal places. It may cause social and political interruptions. Cell phone addiction can cause health problems.

They are studies from the National Institute of Neurological Disorders and Stroke(NINDS) that explain: There is little clinical data to prove whether repetitive and forceful movements of the hand and wrist during work or leisure activities can cause carpal tunnel syndrome. Repeated motions performed in the course of normal work or other daily activities can result in repetitive motion disorders such as bursitis and tendinitis. Another problem isAsthenopia. Asthenopia is common when looking at a screen for a long period of time. It indirectly affects someone through fatigue and headaches. There is a case study that shows the relationship between phone uses that emits radio frequency energy and may potentially cause certain types of cancers and health problems. In the Does Internet and “addiction” exist?

Some case study evidence[6] the author Griffiths explains that there are studies that investigate the cases to find out the relationship between smartphone addiction and potential occurrence of cancer due to the use of it. Researchers have carried out several types of epidemiologystudies to investigate the possibility of a relationship between cell phone use and the risk of malignant(cancerous) brain tumors. The Interphone Study, conducted by aconsortium of researchers from 13 countries, is the largest health-related case-control study of use of cell phones and head and neck tumors. Most published analyses from this study have shown no statistically significant increases in brain or central nervous system cancers related to higher amounts of cell phone use. One recent analysis showed a statistically significant, modest, increase in the risk of glioma among the small proportion of study participants who spent the most total time on smartphone calls.

In the following article, another serious problem is discussed. In the article Psychological Predictors of Problem Mobile Phone Use,[5] the authors says that there are also concerns that some mobile phone users incur considerable debt, and that mobile phones are being used to violate privacy, and to harass others. In particular, there is increasing evidence that mobile phones are being used as a tool by children to bully other children. There is another good case to support the addictive quality of extensive mobile phone use. According to a study[7] by Lisa J. Melo, PhD, and Amanda M. Stone, from the University of Florida, in Gainesville, they found that: Cellular Technologies Addiction Scale(CTAS)[3][4] scores (measuring dependence) ranged from 26 to 117 (mean, 62.6 ± 18.5) and were normally distributed. This suggests that the tendency to display cell-phone dependence symptoms (eg, greater comfort when able to use the phone, compulsion to spend more time on the phone than desired, and emotional attachment to the phone) varies within the general population.

You might see a person with obsessive-compulsive disorder(OCD) who is using the phone to check things, or you might see a person with social phobia who is using the phone to avoid interaction with people. Basically, the dependency varies by user, but the tendency to display cell-phone dependency symptoms cannot be denied. Also, using a cell phone before bed can cause insomnia, according to a study by scientists from the Karolinska Institute and Uppsala University in Sweden and from Wayne State University in Michigan. The study[8] showed that this is due to the radiation received by the user as stated, “The study indicates that during laboratory exposure to 884MHz wireless signalscomponents of sleep believed to be important for recovery from daily wear and tear are adversely affected.

Excessive usages can cost own’s health, relationships, and professional lives. They can cause excessive debt and anxiety. But there are several ways to overcome cell phone addiction. The ways getting over addiction of Smartphone are actually very various and may be personal or biased. However, whatever you choose, it would be help you from addiction. First, a person must limit usage. For example, people can limit the time how much time should be devoted to the phone unless it is ringing or vibrating. They could limit the time of googling the internet to two hours a day and feel free in this time. At first, they may need to put the device somewhere like in the bag that they are not going to be conscious of.

The next important thing is to stop downloading Application Software that may attract people to use the phone more.Application Software are a cool thing, but they increase phone addiction. Furthermore, one can put the phone down and begin participating in in outdoor activities. This diverts the mind from focusing on the phone. In order to overcome an addiction, people need to remember the damage phone addiction can do. In the article Coping with Cell Phone Addiction, there are seven treatments of overcoming addiction of smartphone: 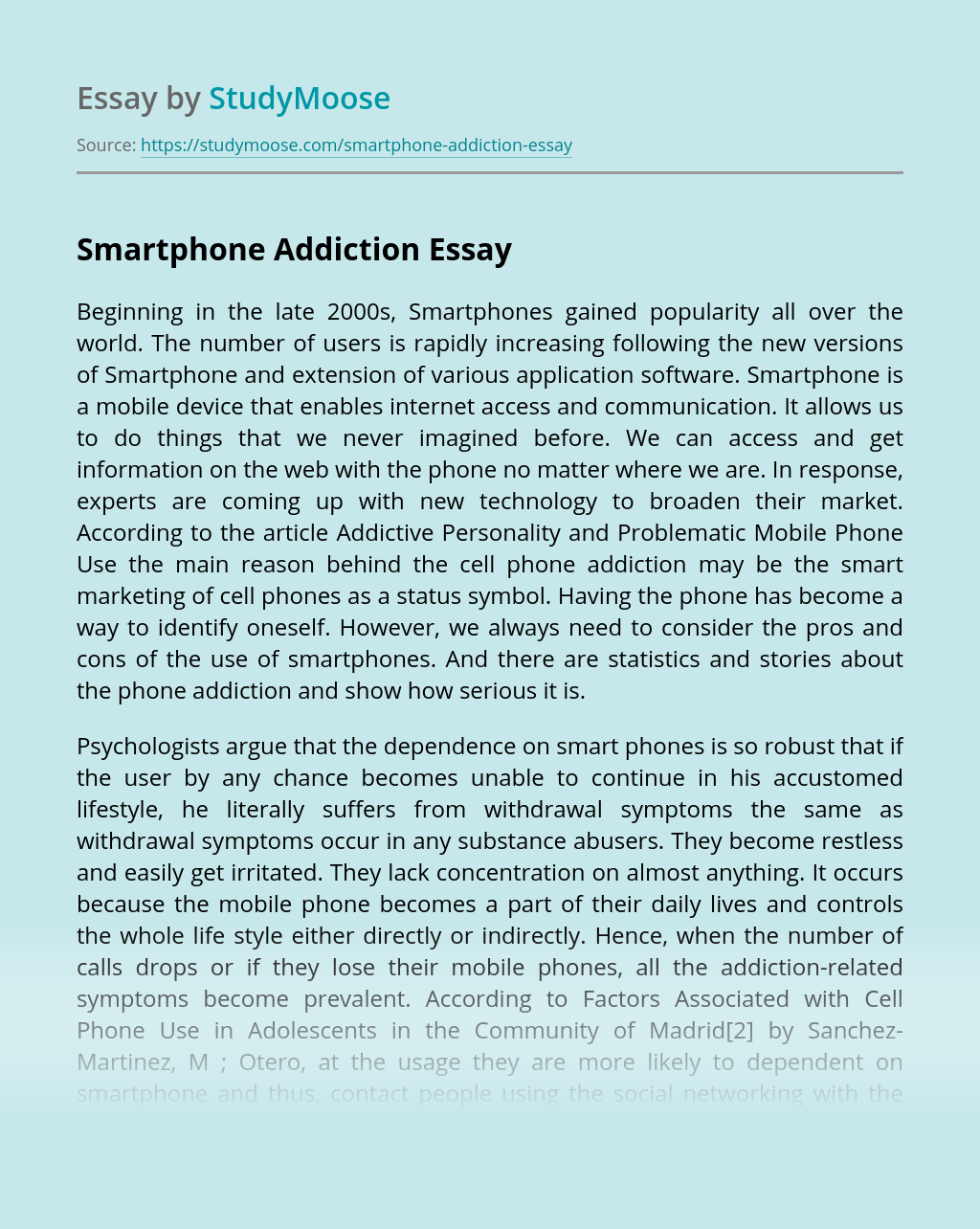